Another Occupy movement rears its head at Westlake

A coalition of homeless advocacy groups are occupying Westlake Park in an effort to bring attention to what they describe as the ineffectiveness of King County's Committee to End Homelessness.

A King County sheriff surveys the scene next to the Occupy information booth recently.

A coalition of homeless advocacy groups are occupying Westlake Park in an effort to bring attention to what they describe as the ineffectiveness of King County's Committee to End Homelessness.

Tickets are sold out to see Tavis Smiley and Cornel West at the Neptune Theatre tonight, but those desperate for a glance of the pair could always try Westlake Plaza, where advocates have set up an overnight camp in an occupation targeting the Committee to End Homelessness in King County (CEHKC).

The occupation was organized by a coalition made up of three organizations — SHARE/WHEEL, Real Change News, and Nickelsville — who started planning the event three months ago, frustrated by the CEHKC’s lack of effectiveness over the past several years. “They’re seven years into their ten year plan to end homelessness and the numbers are increasing,” said TJ Johnson, a Nickelsville 'structure master' and homeless advocate.

The coalition is demanding that the CEHKC revise its operation in three key areas, specified on the event fliers. “1. Data collection and outcomes should be used as a tool not a weapon ... 2. Provision of low cost services must be prioritized ... [and] 3. CEHKC must create and promote an economic justice agenda.”

Organizers of the protest say that representatives from SHARE/WHEEL and other groups met with Smiley and West, in town to promote their book on poverty, earlier today and invited them to attend the event. West gave a lecture at the Seattle Occupy movement's Seattle Central Community College encampment in November 2011.

Johnson emphasizes that Nickelsville, along with many other organizations, survives without government support, but manages to stay in operation thanks to community support and donations. “We’re not asking them to fund us, we’re asking for a place to be.”

The 24-hour occupation began at noon today and will run through noon tomorrow — without interruption. The group holds a temporary restraining order against the City of Seattle, signed by District Court Judge Justice Richard A. Jones, ensuring their right to the space.

The group was forced to file a lawsuit for the restraining order when the City of Seattle and the Dept. of Parks and Recreation refused to issue the group a permit for their overnight protest, due to the ban on public camping. Justice Jones said in his ruling, however, that the City had changed the reason for their refusal several times, creating questions about whether the refusal was narrowly tailored to specific compelling government interests.

At 12:30 p.m. today there were already around 40 occupiers present, many of them members or volunteers of the lead organizations, along with a large number of representatives from Occupy Seattle. According to Johnson, the partnership with Occupy Seattle began when the homeless community reached out to occupiers to teach them strategies for building and organizing a community living together outside with limited resources.

“We showed them how to build a strong community and now they’re giving us a hand in what we want to accomplish,” she said. 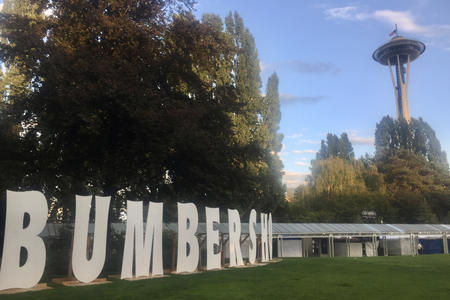