The police-DOJ pact: Way less than meets the eye

A chance to rally behind long-needed major reforms ended up just lateraling the issues to a new group. Here's how we lost the opportunity for big yardage.
by / August 6, 2012

A chance to rally behind long-needed major reforms ended up just lateraling the issues to a new group. Here's how we lost the opportunity for big yardage.

The relief that greeted the peace treaty between Seattle Police and the Department of Justice late last month obscured just how minimal was the progress. Avoiding a threatened lawsuit was the one sure benefit. After that, one enters the realm of lost opportunity and (very) guarded optimism.

"There was an opportunity all along for substantive reform of the Department, using the DOJ investigation as the leverage to get there," observes one well-placed source at City Hall. "Instead, we elected to play small ball." The agreement sidesteps the tough questions: specific remedies, timelines, police training, management oversight, undoing detailed regulations that the Police Guild has imposed on managment. Those substantive issues are kicked down the road to a citizen's commission and a court monitor to try to work out what all the king's men couldn't agree on.

What might have been a historic, multi-lateral agreement among police, the mayor, the city council, the city attorney, the U.S. Attorney, and the public, became instead a lateral. The ball is tossed to a court monitor, still to be named, who must develop the policies and safeguards, working with a citizen's commission, still to be named.

Good luck on that, many feel.

Consider what the monitor will face.  There are very few negotiated points of reform to oversee, mostly just hot potatoes to try to resolve.  He or she will come into a department that is deeply distrustful of people with no history inside the department and with very little knowledge of Seattle. He or she will be dealing with Chief John Diaz, whose community reputation sank during the year of negotiations because he never stepped up to join the reform parade, chosing rather to rally police resistance. The same holds true for Mayor Mike McGinn, who fought off the DOJ lawsuit, resisted any grand bargains, and got himself way too far on the side of status quo.

Further, there is an amorphous Community Police Commission, set up to define and then oversee the monitor and the reforms. Again, vagueness rules: members are to-be-picked (a likely mayor-council arm-wrestle), no expertise is required, no indication even of how many members, no timeline, and a suggestion that the commission will report to the SPD. It is this commission, moreover, that is charged with coming up with recommendations on substantive reforms. That's a lot like: Back to the drawing board.

Worse, with so little actually negotiated or spelled out in the consent decree, the Police Guild is in its usual catbird seat. That means every coming reform is "negotiable," with any give on the reforms accompanied by offsetting gains to the police in salaries, benefits, and rank-and-file rule-setting. This is the dubious bargain we got in the last round of reforms of police oversight, negotiated by Mayor Greg Nickels, where the Guild made huge gains in pay and autonomy.

Could these baby steps lead to something big?

U.S. Attorney Jenny Durkan thinks it could still work out. "The consent decree does have specific remedies, timelines, and training requirements." she says. "There are also strong oversight powers given to the monitor (who does not report to the citizen commission) and the federal Judge is the ultimate arbiter."

"The settlement is a good thing," observes City Councilmember Tim Burgess, a former police officer and former head of the council's public safety committee, "in the sense that for the first time we have a federal judge and a federal monitor to oversee the changes. We have known for decades, at least since 1992, what needs to be done, that we have some officers who escalate situations, that we need better training and internal controls and accountability. This time we have kicked the can forward on exactly what the reforms should be, and left the nature of the substantive reforms with a citizens' commission."

"To work, we would have to have a strong, experienced monitor who has the respect of police and the community," says City Councilmember Sally Bagshaw cautiously. City Attorney Pete Holmes echoes the sentiment, saying all now depends on the choice of a monitor and the willingness of a good monitor to wade into such a choppy sea. "The process of reform is just at the beginning point," wrote a wary Jennifer Shaw of the ACLU/Washington, one of the entities that invited in the Department of Justice.

Maybe it was too much to hope that this mayor (with a staff very light on police matters)  and this police department could actually embrace serious reforms in use-of-force regulations, training, increased sergeants, and greater flexibility by management to move troops around and embrace new policies. But the hope was definitely there, in the beginning.

Once the Justice Department was invited in two years ago to study the cops for possible bias and excessive use of force, the reformers had the kind of leverage that many previous blue-ribbon commissions lacked. The expectation was that the mayor would recognize both the political danger and the opportunity, as normally happens in other cities. The hope was that a team consisting of U.S. Attorney Jenny Durkan (a veteran of efforts to reform the SPD), City Attorney Pete Holmes, Mayor McGinn, Police Chief Diaz, and key leaders of the city council would negotiate major reforms.

For this to happen, the mayor would have to assemble a broad team, hold it together when the return fire got hot, and find a sweet spot for the reforms. That's asking a lot, particularly with a go-it-alone mayor, an inexperienced city attorney, and a council full of mayoral rivals.

It quickly took another turn. The DOJ report was clumsy, badly overstating matters. That put Jenny Durkan on the defensive, and the DOJ team unwisely chose not to explain the basis for some of the more shocking assertions. (Was the 20 percent of incidents allegedly using excessive force due to a few bad apples, wrong training from the state Academy, or some new definition of excessive? Don't ask.)

The mayor, himself a litigator, took over the legal strategy, despite differing views from the city attorney and the council. A council source says the council learned confidentially in January that the DOJ wanted to work with the city on a settlement, as long as the feds and the locals would shape it together and it would meet federal guidelines. A council committee (Burgess, Sally Clark, and Bruce Harrell) tried to get this ball rolling.

But the mayor would not budge from his adversarial legal stance, according to council sources. McGinn chose not to concede and look for common ground but to poke holes in the DOJ and encourage police resistance. This quickly fractured the potential reform coalition, and those pushing for a comprehensive, breakthrough package gave up. Hardly any negotiations ever took place, except for the face-saving last 10 days before the settlement.

In retrospect, one wonders if there could have been a way to rescue this opportunity. Some suggested hiring a mediator, as a kind of test-drive as the future court monitor. When that didn't fly, some proposed bringing in a police expert, and when McGinn said no to that, city attorney Holmes did bring in Joseph Brann, currently monitoring police reform efforts in Riverside, California. The city council felt it could not go public with its frustrations, for fear of harming the city's legal position. Sadly, no civic organization wised up to the fleeting chances for serious reform and raised a ruckus.

In the end, the mayor's see-you-in-court ploy worked, and the DOJ backed way down. Perhaps this was a political decision from the Obama administration? Recognition that the DOJ case would have dragged cops, investigators, top brass and many more through the mud of a yearlong lawsuit, making reform even more remote? Looking for a graceful exit? Fed up with the mayor's refusal to negotiate?

Anyhow, no breakthrough deal, tiny progress, One wonders, was there even "progress," or did the whole lost year just drive the contending parties farther into their corners? At any rate, in true Seattle style, the issue was not settled buy just smoothed over to emerge anew in a few more months. That would be the tussle over defining the citizens commission and its members, and the mayor-council debates over naming the court monitor.

As they say, Old issues never die in Seattle. We just relitigate them.

David Brewster founded Crosscut. He is now the director of Folio: The Seattle Athenaeum. 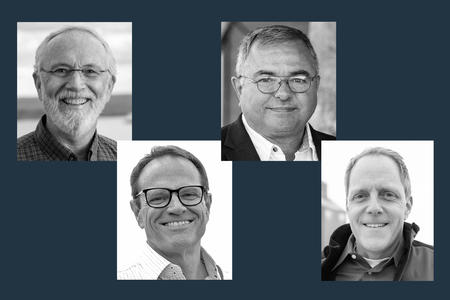