Trai Williams has a dream.

Growing up African American I was always taught to look down on those who went to shelters. "People who go to shelters are bums," my dad would say. Or, shelters are "where they go when they don’t want to work for anything and they can go and get free stuff.”

And I believed him.

The one thing my dad taught me was you that have to work for everything, that nothing in life is free so if you want it you better go get it. It made me think that the people who went to shelters were beneath me. Even after I became homeless I thought I was better than they were, and I would make sure not to look homeless like they did.

Let’s just say I was wrong and so was my dad.

Shelters are connections to more than just a bed, food and a shower; they provide resources that help people get out of bad situations and better their lifestyles. I didn’t stay in a shelter 'til I was 22 years old. At that point, it was the only option I had left.

However staying at the multiple shelters in Seattle I never felt like they were culturally accurate for me. There were no staff or youth I could identify with, no one from my community I could look up to. I didn't feel comfortable. Some shelters were not made for youth like me, and it didn't seem fair that I had to leave my community to come all the way to Seattle to find one.

Sometimes I also felt like shelters were not pushing kids hard enough to change their situations. They were more just making their experience more comfortable! The only thing I had in common with those shelter youth was homelessness. That wasn’t enough for me!

In King County, about 35 percent of the 5,000 youth who experience homelessness and receive services at local agencies each year are African American youth. This is only a piece of the puzzle; when you think about youth of color as a whole, including Asian kids, Mexican kids, African kids and Samoan kids, that percentage gets much higher. The disproportionality issue among youth of color is something that has been talked about for a long time now; but what is actually being done?

After being homeless for 10 years, on and off, and then working with The Mockingbird Society for three years, it became a passion of mine to better serve my community. I may have found a way to do that.

2929 South 200th Street in SeaTac, WA. Does this sound familiar to anyone? It's the address of Fire Station 45 — right off Pacific Highway and 200th St. I grew up in South King County and spent most of my homeless adolescence there as well. I know Fire Station 45 well.

The City of SeaTac owns this old station and is in the process of building a new station that will be up and running around mid 2016.

Now I don’t know what the future holds for the old fire station, however I immediately thought it could totally be a drop-in center and shelter that’s youth- and young adults of color-friendly. There are already beds, a kitchen, room for a basketball hoop out back and enough space to make a classroom, music studio, arts room and more. The old station could help with the disproportionality issue and also provide services in the South King County area.

I would call it The Dream House.

During the day it would be a drop-in center serving youth and young adults between the ages of 14 to 25 with a variety of services, programs and advocacy classes to help them make their homeless experience Rare, Brief and One Time Only. Staff they could relate to and look up to would greet them. Drop-in hours, for ages would be 10 a.m. to six .p.m. Shelter hours, for youth between the ages of 18 and 25, would be 8 p.m. to 8 a.m. The feel, smell and sounds of different cultures would be known from miles away.

I have 5 rules in life. I lived by these rules when I was homeless. I would apply them in The Dream House.

The Dream House is not just a place to come hang out with your friends, or play games, or make music or art. This is a place that helps kids get out of their bad situations and pushes them to get back into society.

Rule #2: You must respect those who respect you.

Everyone wants respect but no one is ever willing to give it. Someone has to start somewhere!

We all make mistakes; we are only human. However, I do not believe in 4th, 5th or 6th chances. From personal experience, bad habits can be broken.

Success is not everything. Some of the most brilliant minds of our time failed horribly before they succeeded. Practice makes perfect. Keep at it.

Rule #5: Laugh and have fun with no regrets.

Being homeless as a child or young adult sucks. I wouldn’t wish it on my worst enemy. But we must make the best of our situation in order to overcome all our trials and tribulations.

Plus, I love to make people laugh and I might feel insulted if you don’t. 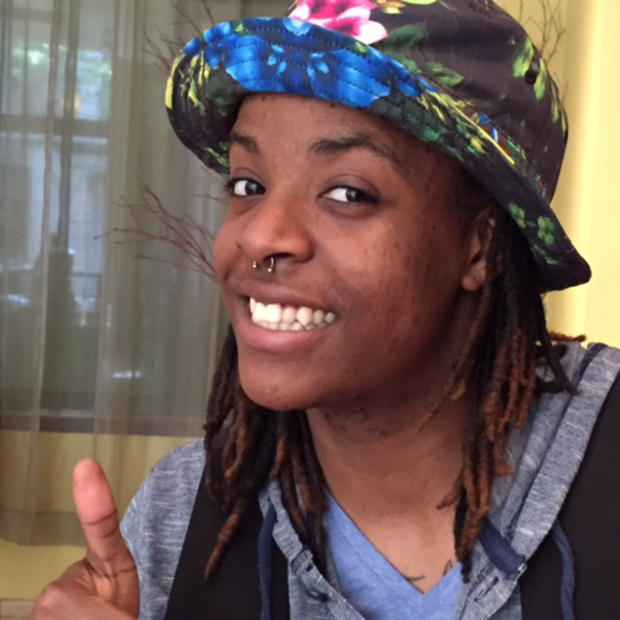 After 10 years of homelessness Trai Williams has dedicated her life to advocating for and working to better serve homeless youth.