Editor's Note: The three poems excerpted here are from Inner States, the as-yet-unpublished collection of 50 poems — one for each of the United States — by artist and author Lorenzo Moog.

I was born in Minnesota and live and write in the state of Washington. Three things happened within a few months of each other that led to this writing experience:

First, a road trip across the United States during which I was constantly delighted and amazed by the landscapes, the regional variations, the plants and animals and the light. I made notes.

Shortly after that trip I read the results of a survey of college sophomores in which 65 percent were geographically illiterate about their own country. For instance, a large sampling said they “weren’t sure” whether Miami was in the state of Florida, which was disheartening to say the least.

Finally, on the train from Boston to Philadelphia I was astonished by the squalor and decay of the towns and cities along the way as the train lumbered through Connecticut, which was very at odds with my previous experiences of that state.

When I returned to Seattle I wrote the first piece, Connecticut, with four more states quickly following at random. The rest evolved over a period of three years as I made discoveries about myself as a writer, a person and an American. In the process of writing the collection of 50 poems, Inner States, college sophomores were never very far from my mind nor were the extraordinary landscapes, the flora and fauna, and history and astonishing diversity of the country we call America.

Here are three of the 50 state poems:

If you want to see Connecticut

take the train south from

Boston, it’s quite a trip.

You’ll be relieved of all your

pre-conceptions of this as a rich

The railroad view may not

be perfectly accurate but

it’s another bookend look down

the row of life’s stories

from Darien and Greenwich

and mansions by the sea.

too and pretty old towns in

the interior with lots of emotionally

mingling with the rednecks.

Mediterraneans are all jostling

under a very pale blue sky.

Its tasteful here, the very best

and tasteless here the very worst,

an exercise in class Americana

from the country clubs, green

in Hartford, to the squalid gray

and crumbling towns along

of jugglers on tight ropes.

Some of the jugglers have nets

beneath them, some of them do not.

Once one day in August in the dog day heat

of the Johnson administration

my young friend and I headed north

from Washington to Rehoboth Beach

on the Delaware shore.

that town was where many in Congress

brought their weary selves in summer

to escape the heat of the capitol and

the burdens of manipulating the Constitution.

On crossing the state line into Delaware

it wasn’t long before we smelled the sea feeling

heat rise up from the two lane road lined

We bought a watermelon from a country kid

with two teeth and a bottle of gin for

two dollars fifty in the town.

The beach was hot,

we roasted, but refreshed ourselves liberally

The rest of that day and night

is a blur except that I recall when walking

along the shore by moonlight our footprints

shimmered silver in the sand and we slept

on the beach with strangers.

in 250 million years, crawled among us to lay

their pearly green eggs, fertilize them,

then depart, knowing that waves would later

had been coming to Delaware for a long, long time.

As the luck of youth would have it we had spent

the night in front of a good hotel.

waiters who assessed us with disgust but my friend,

being from the privileged class, barked at them

in a language they understood.

The taste of the food has never left me; eggs,

poached in mussel stock, served with a golden

Even with my bleary eyes

and sandy clothes I delighted in the setting

of the spacious room with doors thrown open

This place has a split personality.

but that is only a half truth.

A better name would be

The Green and Gold State

split the state in two,

leaving the east side dry and golden,

the west side wet and always green.

The Olympics rear up on the coastal side,

the Cascades cut the ground in two,

Olympus broods, Rainier rules over all.

The Cascades, rippling down the middle,

over land and people alike.

The east is apples, lentils and wheat

The west is computers, coffee and jets

In these two regions, east and west,

it is the simple difference between

Native languages spill out in many places,

names of the rivers for instance;

not just water but the blood of our ancestors.

Rivers, land, and people, are all in concert

with the solid rhythm of towering mountains.

Clouds, the organs of union between

the mountains and sea results in cool

gray rain that falls placidly onto the land.

Out on the farthest point west, Cape Flattery,

for the first time ... in the company

of otters, whales and puffins, 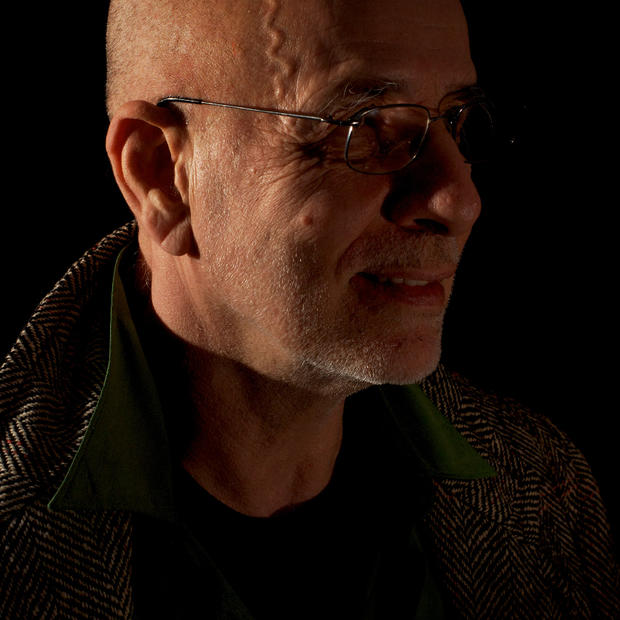 Visual artist, poet and librettist, Lorenzo Moog is a Minnesota native who has lived and created in the Puget Sound region since 1989.