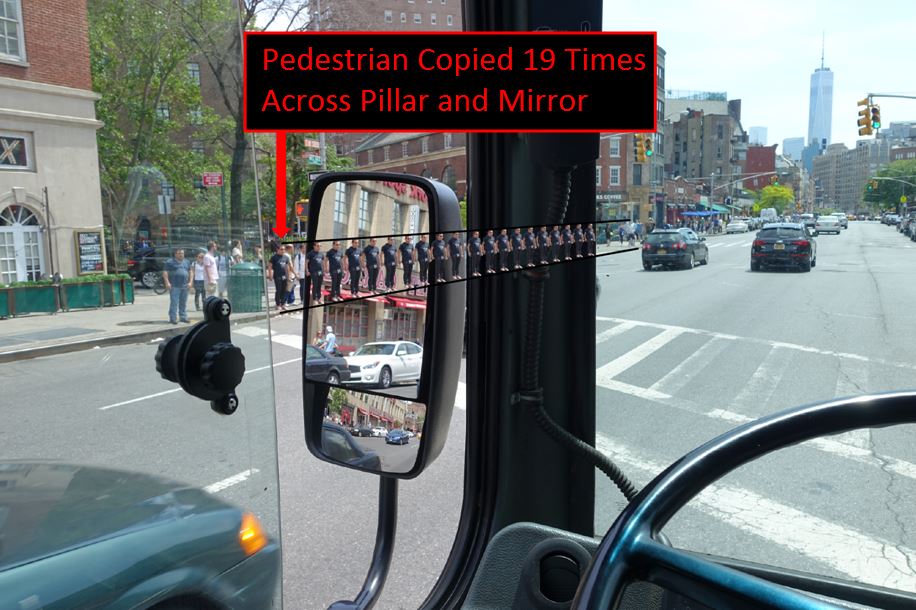 A graphic representing pedestrians in a sizable blind spot on an Orion bus was created by an Amalgamated Transit Union safety official using a photo from a New York City bus.

A 94-year-old woman died Thursday afternoon after being struck by a bus turning left near the Northgate Transit Center in Seattle. The victim, Jacqueline Morrison, was struck at Northeast 100th Street and Second Avenue Northeast. Her body was pinned under the coach after it hit her, according to Seattle Police spokesperson Officer Lauren Lovanhill.

The bus was a model manufactured by Orion, which was made with an 8-inch wide pillar on the front left-hand side. Some union safety experts have said the pillars make it difficult for drivers making left turns to see pedestrians.

Thursday's accident bears similarities to others investigated for a Crosscut report in September. In Crosscut’s examination, Orion models were involved in seven out of eight state Department of Transportation-reported collisions where a bus hit a pedestrian in a crosswalk as it turned left. In 2010, King County Metro purchased the buses made by Orion, a now-defunct division of Daimler Buses that stopped taking orders for coaches in 2012.

Most of those Metro drivers told police at the time of the collisions that they did not see the pedestrian at all — others said they saw the walker but only when it was too late to stop. And several explicitly told police their vision was blocked by the post at the front of the bus.

Metro told Crosscut at the time that there was no relationship between bus accidents and the Orion model buses. They said the agency took a number of steps, including a three-hour retraining for all drivers, after it noticed an uptick in pedestrian-bus accidents in 2014. Federal statistics show the agency has good safety record overall. It also put smaller mirrors on the driver's side of its Orions.

One of the pedestrians featured in Crosscut's report, Andrea Travis was 27 when she was struck by a bus in December 2012 as it turned left onto Broad Street from First Avenue. Travis, who is visually impaired, landed face down on the wet street, her head split open, said her attorney, Dave Richardson.

She suffered the head wound, a spinal injury that her attorney says may lead to osteoarthritis later, and post-traumatic stress. She subsequently sued King County in September 2013, for past and future medical expenses, lost wages and future pain and suffering. In its response to the lawsuit, King County acknowledged the driver’s negligence caused the accident, but denied Travis’ injuries were the direct result of the operator’s actions.

Prior to Crosscut's investigative report, Metro made what her attorney, Dave Richardson, called a "low-ball offer," which was not much more than her medical expenses. Public records show that, after the article was published, King County agreed to settle for $100,000. Although Richardson wouldn't discuss the amount of the settlement, he said, "The number that we settled at was the number we had in mind during mediation long before. It was the number that the mediator had been pushing for months and months."

Laura Kaufman, an award-winning journalist, is writing a book about First & Pike News.