Best of 2015: How much of Seattle’s housing is affordable? No one knows for sure 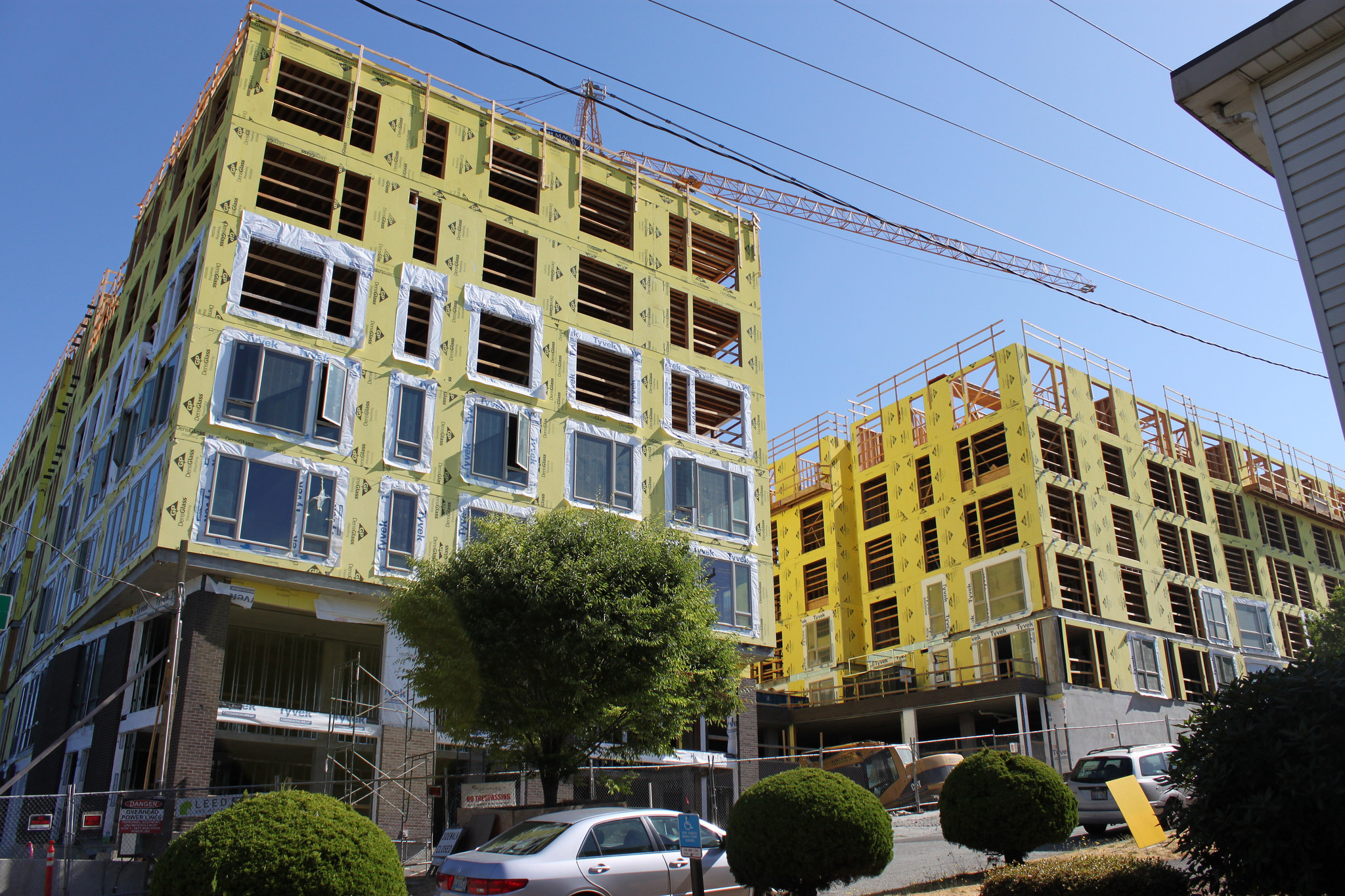 This week Crosscut is running some of our best stories of the year, as selected both by our writers and by popularity with readers. We will resume original content next week.

Until last month, I managed a 20-unit apartment building in Lake City. A one bedroom rented for about $900 a month; a two-bedroom, $1,100. One tenant, an Ethiopian immigrant, drove a taxi. Another man from Mongolia supported a family of four as a handyman. A young man upstairs sold weed in a nearby pot shop. Without a doubt, these renters earned well below Seattle’s median income of around $50,000 a year-- taxi drivers, for example, earn about $27,000 a year.

This is affordable housing for people who need it. But because it’s market-rate, the city may not know it exists. Members of Mayor Ed Murray’s Housing Affordability and Livability Agenda briefly considered developing a strategy to gather data on market-rate affordable units, but the recommendation didn’t make the final cut. Now, Councilmember Kshama Sawant is pushing city officials to get that accounting done. If they don't, Sawant floated the idea of a Seattle City Council commissioned study.

According to Office of Housing Communications Director Todd Burley, it might not be so easy.

By the standards of the city’s Office of Housing, the units in this Lake City building are affordable to individuals earning less than $37,000 a year. But the rents are not subsidized or restricted. Simply, the building was built in the sixties and lacks a certain, shall we say, charm. The market does not yet justify a $1,500 rent for this motel turned apartment complex. This is not uncommon; buildings from the sixties and seventies tend to be Seattle’s most affordable. 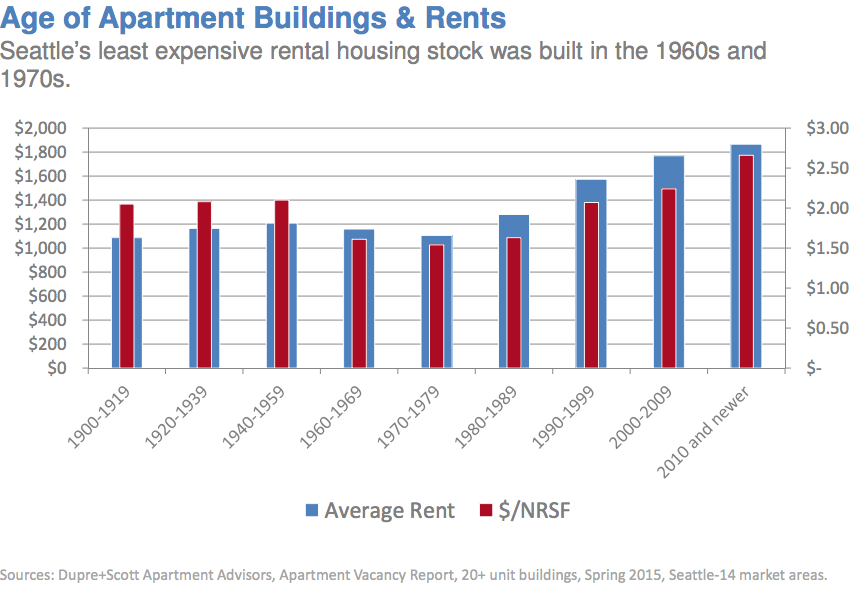 The building is owned by a large property management company. It's a for-profit that charges what it can get for its apartments. When I was first hired, the founder, an incredibly nice man, had a good laugh over my history in non-profits.

Mayor Ed Murray handed his Housing Affordability and Livability Agenda the goal of laying a pathway to 50,000 new housing units in ten years. 30,000 of these would be market rate, meaning no restrictions on rent limits. 20,000 would be subsidized or income-restricted.

Members of the HALA, and even Murray himself, called the number a “stretch goal.” It’s a stretch because, while market-rate housing development is on pace to reach its goal (over 8,000 units were built in 2014), the 20,000 affordable units would all be rent and income restricted, requiring a herculean effort on the part of the city and partnering non-profits.

Every year the Washington Department of Commerce puts out a housing needs assessment that keeps tally of subsidized and income-restricted units. According to the Office of Housing’s Burley, these units are mostly split between City-funded projects and the Seattle Housing Authority.

Seattle’s rents may be rising, but a lot of housing affordable to people earning less than $45,000 a year still comes from the private market. But while statistics can dance around what’s available, nothing hits it on the head. “There’s a lot of information on average rents and vacancy.” says Director of the Runstad Center for Real Estate Studies at the University of Washington Peter Orser. “[Apartment market research firm] Dupre and Scott tracks a lot of that vacancy and rent information. They literally call all those buildings.” But calculating affordable stock? “It’s a deep, dark hole that’s hard to figure out.”

Because there is no hard number for market rate affordable housing, the city measures its affordable housing progress against what it can track -- namely, the nearly 30,000 subsidized units in Seattle today. In a March e-mail to the HALA members, Leslie Price of the mayor’s Office of Policy and Innovation wrote, “Changes in the rent of market-rate housing will neither count toward or against the 20,000 target.  At present, the city does not have a mechanism to track the changes of market rent levels on a unit-by-unit basis.”

The closest the city has come to gathering this data was in the Department of Planning and Development’s relatively new Rental Registration and Inspection Ordinance. That program requires landlords to register buildings of five or more units, mainly as a way to ensure the facility is up to code.

In 2014, one professor from UW and one from Harvard asked DPD to include questions about rent price in that registration. The professors volunteered to interpret the data. But the city backed down after receiving pushback from the landlords. A HALA member, former Tenants Union Executive Director and Seattle City Council Candidate Jon Grant, said the DPD offered to run a voluntary survey. But Grant said it wouldn’t have been worth the money.

The first major recommendation from HALA to achieve 20,000 units is to pass a new housing levy, set to expire next year. Additionally, commercial linkage fees would charge commercial real estate developers a per square foot fee to be used for affordable housing. And, perhaps most surprising, is the mandatory inclusionary housing recommendation that would require residential developers to either dedicate 5-7 percent of their units to affordable housing or pay for off-site development.

Not having a clear picture of market affordability doesn’t necessarily get in the way of those recommendations. “I don’t think it should be a deterrent to policy, that’s pretty darn clear,” says Oser. Indeed, few argue against the city’s need for subsidized housing.

But it does throw in wrench in the spokes of a few people’s wheels. Grant, along with several other city council candidates including Lisa Herbold, Tammy Morales, Bill Bradburd, and Michael Maddux, recently pledged to implement within a year a one-for-one housing replacement requirement to preserve “the thousands of affordable units of private, unsubsidized housing that will be vulnerable to speculative investment pressures.”

Grant admitted, however, not having a good picture of that private housing, “has been a real point of frustration for me.”

A pending ordinance from Council President Tim Burgess, whom Grant hopes to unseat in this year’s elections, would require landlords give the City advanced notice before they list a building with affordable units for sale. However, because of limited oversight, the ordinance would rely on self-reporting landlords.

Sawant first raised the issue of market-rate affordability at the Seattle City Council’s first Select Committee on Housing Affordability, created specifically to comb through HALA recommendations. Her main concern was that 20,000 units would not be enough to cover what was lost in the private market over the next ten years, let alone increase overall stock.

“We need a good reliable estimate of what’s available,” Sawant told Crosscut Wednesday. “[HALA] made it clear that they weren’t thinking of that. We have potentially a very inaccurate picture of what’s coming.”

Sawant repeated this sentiment in an e-mail to members of the Office of Housing, the Department of Planning and Development and the Executive Office. Additionally, she laid out a hypothetical scenario in which developers could replace older, affordable buildings with more expensive units. “They might demolish it to allow for the construction of a much larger and brand new 100-unit building,” she wrote. So while the inclusionary mandate might create seven new affordable units, she argued, it would be at the expense of an entire building of affordable units.

Sawant urged the city department to improve on this “vague accounting,” as she called it. If not, she said, “the Council could commission a study from independent affordable housing experts.”

“I see where she’s coming from,” said Burley, but he added that “it’s really tough to get at what she’s going for. That’s what’s really tricky about naturally affordable units is there’s nothing that can stop [redevelopment] from happening.”

“For her to want to track that or really accurately claim that so many affordable units are lost is really tricky and potentially impossible. You’d have first verify all the rents and then verify the incomes of people in those apartments.” The latter, according to Traci Ratzliff at a July 4 Housing Affordability, Human Services and Economic Resiliency Committee, would get into issues of privacy.

The HALA recommendations perhaps do not go as far to bridge the private/public affordability gap as some housing activists would like. But, like the statistics, it dances around it in other ways: tax credits to landlords who preserve affordable units, expanded Multi-Family Tax Exemption, more aggressive city efforts to acquire existing affordable housing and assistance with making improvements on older housing.

For UW’s Orser, “The issue is how do you provide enough supply so people aren’t raising rents 20 percent so we’re losing that stock to a slight re-model which makes it unaffordable. I think you have to create new and use the supply constraint.”

In some ways, the HALA's efforts to increase density is an attempt to do just that.

As I was leaving my manager post in Lake City, I overheard a rumor that the company was considering selling the building. It wouldn’t be a surprise. The U shaped complex, flush with an outside hallway and a beige, gravel veneer, is slowly getting socked in with larger, more modern apartments. It would be easy to look at this sort of development, which is not difficult to find, and conclude it was, as Sawant has called it, an epidemic. But that belief would be anecdotal, which, for now, is as close as you can get.