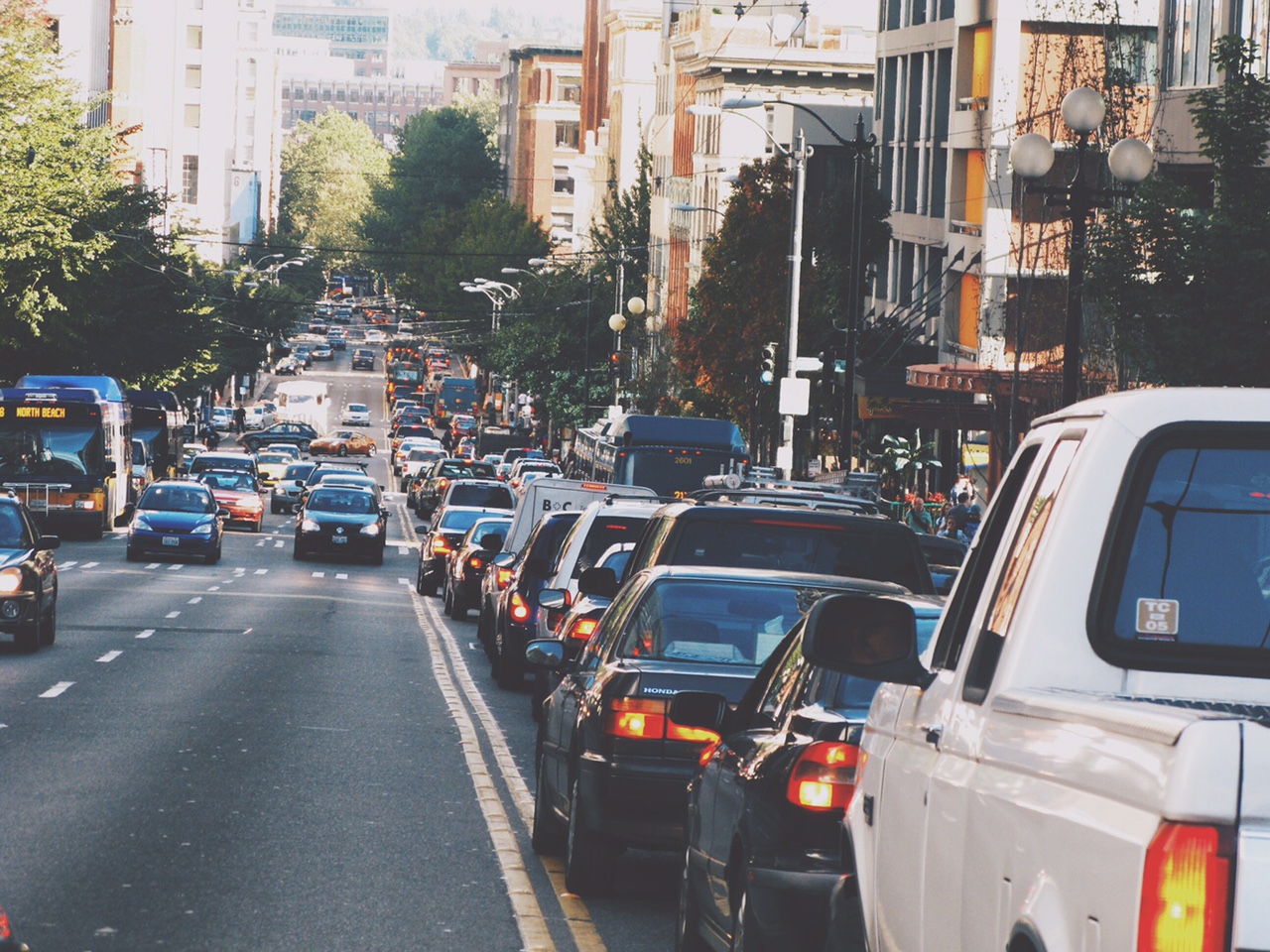 Gray boxes, holding the wiring for nearby traffic signals, dot more than 1,000 intersections throughout Seattle. They fade into the background by design, many of them further camouflaged with graffiti and posters for candidates or concerts.

It would be no surprise, then, if you’ve missed a new accouterment added to many of these boxes in the last year: a small rubber antenna, like a lily pad or tiddlywink, perched on top.

The antennas are a patented design from Skywave Antennas in Huntsville, Alabama. Each is connected to a modem that casts a net of Wi-Fi across the intersection. As you approach, the signal pings not only the sensors in your car, but your phone and tablet as well. A succession of these gizmos can track your progress down the street.

It’s another step in Seattle's march to the future, a world where the street grid adapts to congestion, construction, accidents and football games in real-time. And as the city works to build a framework for vetting new technologies, struggling at times to keep pace with the speed of technology, it is also driving privacy advocate nuts.

Seattle's street grid is packed beyond its capacity. The city recently ranked 7th worst in the country for congestion. Because of geographic constraints, however, building more roads is really not an option. That leaves either getting cars off the road or allowing them to move more smoothly through the system -- and that means making the traffic grid a smarter place.

The core of this effort is the Seattle Department of Transportation's Traffic Operations Center. High in the Municipal Tower, the operations center is a sort of NASA mission control for Seattle traffic: Desks with computers face an enormous screen, which is parceled into about thirty smaller views from traffic cameras around the city.

From this room, SDOT can monitor 200 traffic cameras, 34 message signs, 1,100 traffic signals and basically any major event or road closure, all in real time. The computers update travel times, dispatch incident responses, adjust routes around construction zones, and change messages on signs around Seattle. It’s all about moving people in and out of the system as quickly as possible.

But the thing about traffic is that it’s the result of spot decisions made by a million unpredictable human beings, and without an understanding of how people behave within that system, there are limits to relieving the immense pressure put on traffic after an accident, in rush hour or during an event. That’s where large-scale data collection comes in.

Before the most recent Wi-Fi based system, SDOT deployed license plate and Bluetooth readers to gather information as cars move from one place to the next. But while effective for highways and large scale roads, they left something to be desired at intersections and smaller corridors. The new system will provide a much more detailed picture: while Bluetooth readers capture 5-7 percent of cars passing intersections, the Wi-Fi readers capture nearly 50 percent from cars with smartphones or tablets with Wi-Fi turned on.

The Skywave antennas are part of a larger system installed by a company called Acyclica. The readers are placed along a street corridor, creating a Wi-Fi signal. As a car passes one of the readers, any wireless device – phone, tablet, Bluetooth, car sensor – leaves a mark. As that same device passes through the next intersection, it gets pinged again. As the car passes more readers, algorithms are run to calculate speed, distance, time and general behavior.

One car doesn’t tell a lot. But as thousands, and eventually millions, of cars follow the same path, the data net thickens – that metadata we hear so much about – and the grid's capacity to adapt grows. As a result, traffic signals  and warning signs will, in theory, grow smarter, adjusting more accurately during certain times of day, and even learning to respond to isolated events.

“We have a Thursday night game between the Raiders and Seahawks and we’ll see how our system reacts," said Adiam Emery, an Intelligent Transportation System Engineer with SDOT. "In real time this type of data will be feeding the system.”

After a pilot program along Mercer Street, SDOT is moving forward at full speed. Readers have been installed throughout downtown, along Mercer Street and, most recently, along the construction corridor on 23rd Ave. According to Emery, data will begin to roll in around the first quarter of 2016. If the effort is successful, it would allow for better use of existing infrastructure at relatively little cost – approximately $2,000 per reader. In a system that needs billions of dollars in improvements, that’s nothing.

It’s hard to talk about data without raising the issue of privacy, however. The new system works because cellphones and tablets have their own identifying numbers called media access control or MAC addresses. As you drive down Mercer Street or 2nd Ave or 23rd, it can tell that it's the same device pinging the string of antennas at the streetlights.

SDOT representatives say they are exceedingly confident this new technology poses no privacy risks. Emery and SDOT Public Information Officer Norm Mah explain that the city receives no raw data from the readers, which they say means it cannot trace information back to individuals or individual devices. Mah compared it to a bar code on a baseball ticket: The system knows you’re there, but not who you are. The data fed into the readers is “scrubbed,” meaning it’s analyzed and aggregated into a lump of useful information, absent of discrete data-points.

But because SDOT is largely free to pursue infrastructure improvements without approval from the city council, advancements are not always aired in public. Emery called programs like this one "business as usual" for SDOT. That approach, though, can leave communication divide. The Department of Information Technology (DoIT) is working on fixing the divide with an initiative to consistently examine the new technologies of departments like SDOT and City Light to ensure they do not encroach too deeply on citizens' privacy. But that initiative will likely not get up and running until January.

In the meantime, systems like SDOT's traffic signals can proceed for months before other departments take notice. DoIT chief Michael Mattmiller said he first learned about the readers a few months ago, close to a year after the Acyclica system was installed.

The issue for Robinson is that the city does not own the technology; a private contractor does. Rather than develop its own system, SDOT found it would be cheaper and more effective to pay a service fee to get it up and running. When SDOT first experimented with the Bluetooth readers, they hired Acyclica, based out of Boulder, Colorado. The city was satisfied with the product so gave Acyclica a contract to build out the Wi-Fi reader infrastructure. More recently, SDOT added four more vendors -- Digimax, Quality Counts, Western Systems and IDAX -- to its vendor pool, meaning any of them may be used to expand the already existing data network.

“I’d like to know what kind of encryption and transparency measures they have in place,” says Robinson. “But we don’t know what the city is asking [of the companies]. If they would just say what they’re doing and make it transparent they would at least have us not worried about whether they’re lying or not.”

When Mattmiller learned of the program, he too had concerns about privacy. "Once we did hear about this, we recognized the concerns of privacy and we jumped in," he says. Since examining the program, Mattmiller feels confident that the technology cannot be used to trace individuals or individual devices.

Acyclica President Daniel Benhammou says his company does not store any raw data. "In the case where you look at types of data with a unique identifier," he says, "the practice is that it’s immediately anonymized and encrypted so that the identifier changes form in an irreversible way. None of that raw data is ever maintained."

The president of one of the other four vendors, who didn't want to be named for fear of hurting his company's chances at more work, says it stores data for up to five years. But, as at Acyclica, the data goes through a "one-way encryption" process and "only a very smart person working for a lifetime could decode the information. We have no desire to track individuals,” he says.

To be sure, though, Mattmiller says a third party auditor has been hired to examine the city's contractors.

The question of data-gathering and surveillance in Seattle exploded in 2013 when reporters at the Stranger exposed the Seattle Police Department’s “Mesh Network.”  That network was eventually shut off after outcry from the public.

Robinson admits traffic management doesn’t concern him as much as law enforcement, but feels any sort of data-gathering device should be run through City Ordinance 124142, which requires all City departments to obtain City Council approval before using equipment capable of capturing or recording data. “The city is once again circumventing the spirit and letter of their own ordinance,” says Robinson.

Chair of the Public Safety, Civil Rights, and Technology Councilmember Bruce Harrell could not immediately be reached for comment.

Mattmiller echoes Emery. "This would not be subject to the surveillance ordinance because it’s not a surveillance technology," he says.

There is clearly a gap between what Robinson sees as the spirit of the law and the literal interpretation of city officials. In theory, this gap will be closed when the city has an official privacy initiative in place. If and when that is passed this fall, Mattmiller's department will be better informed of new technologies and have a more in-depth review process.

"It’s going to take some time to educate city staff  about what steps should be taken," says Mattmiller. "We want to catch these programs up front."

Meanwhile, SDOT's new antennas create a certain knee-jerk reaction, even as data-gathering has become a fact of life. Any perception, real or not, of shrouding the truth is not taken well.

In this case, the ultimate question may be what concerns people more: the specter of overly surveillant law enforcement, or the prospect of spending yet another hour stuck in traffic?