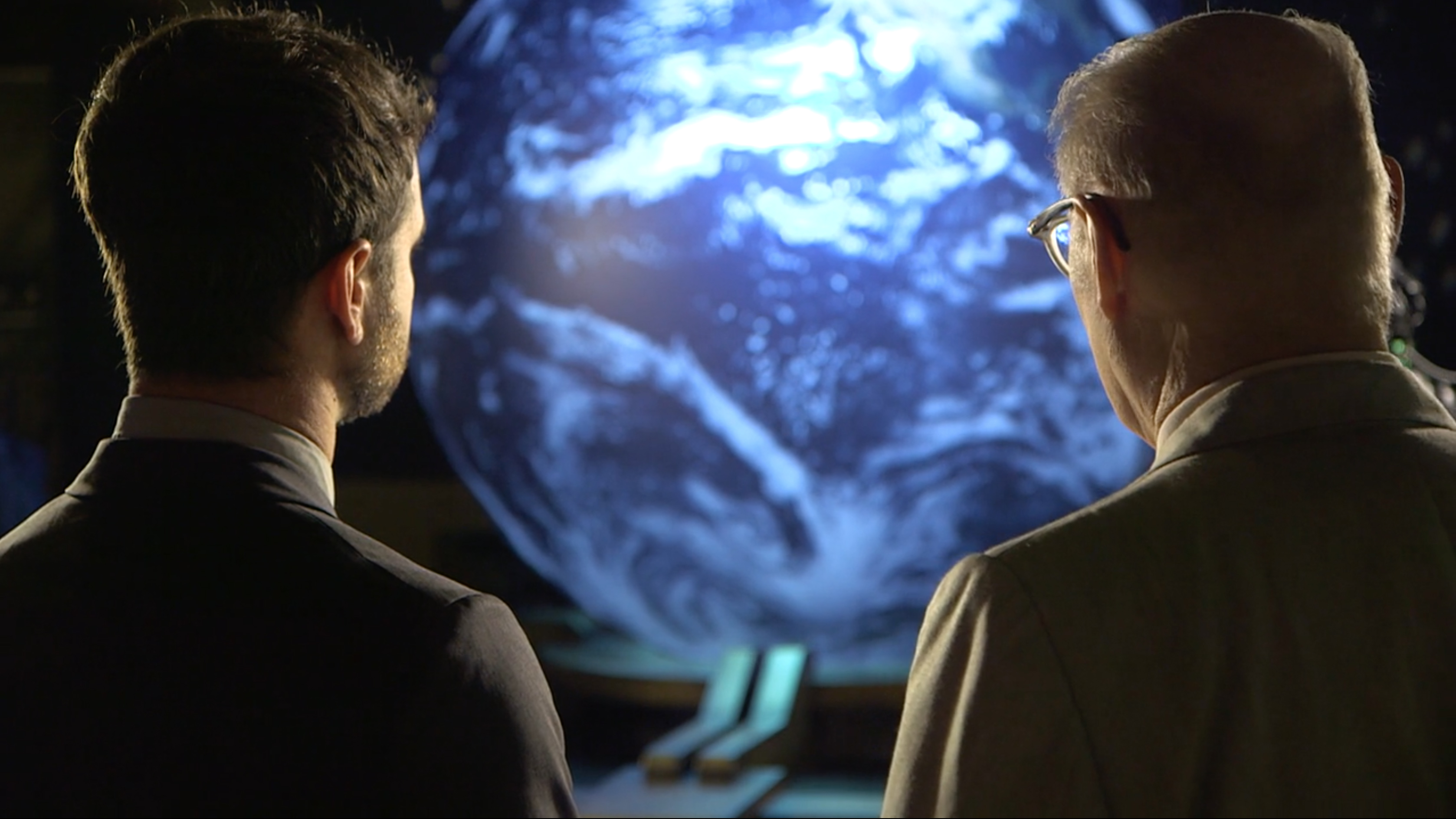 This week Crosscut is running some of our best stories of the year, as selected both by our writers and by popularity with readers. This story was originally published Oct. 29. We will resume new content next week.

It’s not often that the sex lives of astronauts are mentioned not once, but multiple times in an interview with a politician. But then, there are no other candidates in local politics like Goodspaceguy. He has run in every county election for over a decade – 16 elections in a row by his count. And in his run for Seattle Port Commission this year, he made it into the general election for the first time since 2003, with over 24,000 votes in the primary (17 percent of the total).

For such a public figure, Goodspaceguy is something of a mystery to most local voters. As his competitor in the general election, current Port Commissioner Courtney Gregoire, recently summarized him to us: “My understanding is that he does come from Earth. He has some thoughts on space colonization.”

So to get to know him a bit better, Crosscut and co-producer KCTS 9 are proud to present the most incisive interview to date with King County's most persistent candidate.

A transcript of the meeting is below, though we’d really recommend finding some time to watch the video instead. But to ensure some of the full experience comes across for all readers, we've also embedded GIFs throughout this article.

Please enjoy, vote by Nov. 3, and check out the response from Commissioner Gregoire.

Goodspaceguy: The Definitive Interview from Crosscut on Vimeo.

Mr. Nelson, thank you for having me to your office.

Oh, I don’t use my birth name any longer. I’ve gone to court, and I’ve added Goodspaceguy to my name. So I’m running as a candidate under Goodspaceguy, because Goodspaceguy explains my advocacy for a better U.S. space program.

So you prefer Mr. Spaceguy then?

So it’s one word.

Yes, Goodspaceguy is one word.

Why no space between “good” and “spaceguy”? Why no space, Goodspaceguy?

So…I searched for the names I preferred and they were all taken. And finally I got to Goodspaceguy, and no one had it.

Let’s get right down to it. Abolishing the minimum wage, cutting government spending – you’ve made these central platforms of your candidacy for port commissioner. Do you worry you’ve lost focus on your central issue of space exploration?

Uhh, no. So, my website says “colonize space," so anyone who goes to my blog will know I’m an advocate for the U.S. space program.

Well, I notice you haven’t mentioned space colonization in a voter’s pamphlet since 2012. What do you say to those who say "You’ve changed, Goodspaceguy?"

Okay, for U.S. Senate, House of Representatives, governor, King County executive and county council. When Commissioner Goodspaceguy starts at the Port of Seattle, do your colleagues need to worry about your commitment to the institution?

Um, no. You mean that’s the reason…

That you wouldn’t advocate for space launches from the Port of Seattle.

Right, the noise. Unless people said they really would like the noise. But I’m guessing people would say they don’t want the noise.

Yeah, I’m guessing that as well.

So you received over 23k votes in this past election.

A lot of friends…

In one word, what are people voting for when they vote for Goodspaceguy?

How does Commissioner Goodspaceguy plan to use the port to further the U.S. space program?

To get us towards orbital space colonies?

Right, to begin with colonies that orbit around the earth. And I want them around the earth because that’s the cheapest place to a build them for the people to learn how to colonize orbital space.

Cheaper than other planets, such as Mars.

Mars being more distant will be more expensive. And I’m an expert at keeping cost down.

You’ve been very critical of the US government on this issue. You’ve said, and I quote, “Our leaders are not educated in orbital space colonization, and so wasted billions of dollars of our space money and a bunch of our space material.” So let’s dream together. Stardate 2024. Goodspaceguy has just been sworn in as the President of the United States of America.

Wow, that is a promotion from commissioner!

You have the keys to our space program. What’s your first move to get us to the stars?

Okay! The stars are very far way. We’re not getting to the stars. This generation of people, it’s local, our solar system near the earth. So we want to begin our colony right in orbit around Earth. So that’s where I want to get us. I want to use a capitalistic system.

And I want to take away the torture that the astronauts have to currently go through. For example, right now they have a two astronauts at the International Space Station, they’re supposed to spend more than a year? Well, human beings are sexual creatures and for two Astronauts to be up in the International Space Station without female companions is a horrible way to torture them. So the colonies should be co-ed colonies.

Where do you think the big money can be found in outer space?

So I want to talk about the real Goodspaceguy. You’ve previously said “I’m from Phoebe, one of Saturn’s many moons.” What did you mean by that?

And a moon of Saturn really can’t support life. Because it’s so, so cold out there. You get that far away from the sun and earth life will just freeze.

So this is your home? (Gesturing toward giant digital facsimile of Earth)

This spaceship Earth, this is my home. So in politics there are dirty tricks, and one is to say that other candidates said this or that. So that is one of the lies that spread in a campaign to discredit me.

So we’re earthlings, Goodspaceguy. Shouldn’t we focus on earth things? Why the focus on space?

So on spaceship Earth, we are all space travelers. So we’re travelling on the Earth around the sun. And with the sun we’re traveling in the Milky Way galaxy. So this spaceship Earth of ours, that we refer to planet Earth, is one of the best spaceships ever.

I‘d like to get back at that sometime. But let’s travel back in time to 2006. You decide to change your name. Why?

Well when I Googled my birth name, I couldn’t find myself. There were so many thousands of thousands of thousands of people with my birth name that I was just lost in a haystack. So I did a search for space related names that I liked. And all the ones that I liked were already taken by other people. Then I got to the horrible name of Goodspaceguy, hard to pronounce, and no one had taken that name. So I became the first Goodspaceguy on our spaceship Earth. Since then others have taken my name, claiming to be me.

Was there family you needed to run this decision by? Was there a Goodspacegal?

No, I’m single. So it was just my decision alone.

What do you say to critics who say, “You’ve changed your name to further your political career?”

Well I did. Yes, that is correct. I thought with the name Goodspaceguy – which is hard to pronounce because it has three strong syllables – at least people will know I have a space program. Not only do I want to raise the living standards of the people on Earth and in King County. But I also want to begin the orbital space program.

Well, wouldn’t you miss it Goodspaceguy? Living on the earth? Just looking at it from a space colony?

Um, yes. I’d probably remain on earth because life on Earth is much better. The life of a pioneer is a life of hardship. Like two people spending the year up in space without women. That is tough!

So I know you’re a fan of sci-fi, so I want to show you something. (Leans forward. The giant digital facsimile of Earth changes)

The earth looks different! It looks like it did a long time ago!

Oh, he used the ancient Earth. Before the continents split.

The movie was about space colonization, and going to an Earth-like planet as you mentioned, to mine their minerals. What lessons do you think we can take from Avatar?

Do you look up at the stars and dream of Pandoras out there?

I think about it occasionally.

So when you look up at the stars in maybe a quiet dark place, you can see thousands of them, what do you feel?

When you look at those marvels, do you think of how small we are? What it all means? What does it all mean, Goodspaceguy?

Well, we ask ourselves, “Why is there stuff in the universe? Why isn’t the universe just one great emptiness?" So we turn to religion and philosophy.

Would you say you’re a philosopher?

A little bit. I’m influenced. I have many role models.

Isaac Asimov. Benjamin Franklin, um…Jesus. Um, there just so many. But my biggest, biggest…..the Libertarians.

Another of my other role models Mr. Spock from Star Trek. Such rationality.

Spock controlled his emotions, and he wanted a rational solution to problems. So he would study the problems and find the rational solution, which is, copying Mr. Spock, is what I’ve tried to do.

Do you believe you are our Mr. Spock? Spaceship Earth's Mr. Spock?

I believe I’m one of Mr. Spock's disciples. 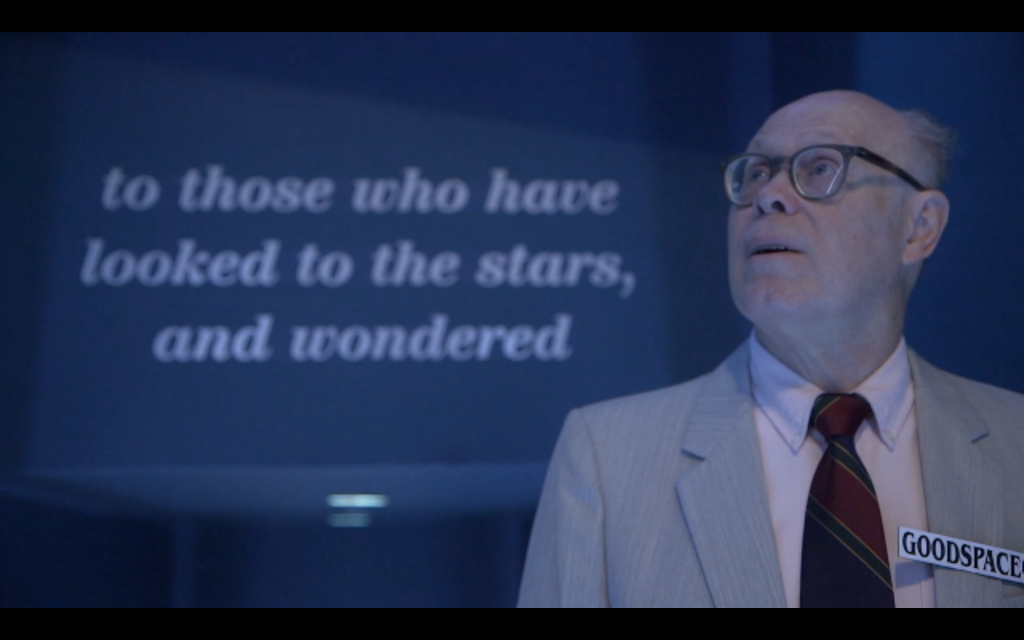 Opponent Courtney Gregoire responded to some of the issues raised by Goodspaceguy in the video below. A full transcript can be found here.