Best of 2015: Why we likely have more boats than air conditioners in Puget Sound 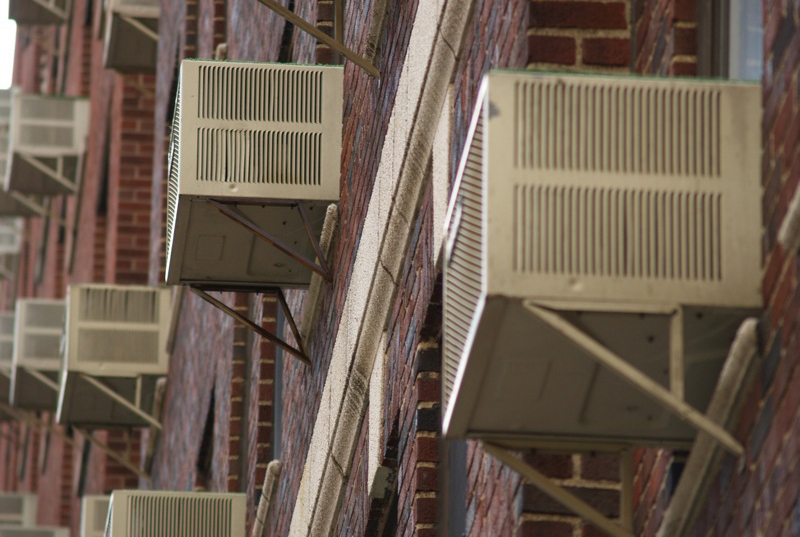 A sight you won't come across in Seattle -- a building full of air conditioning.

This week Crosscut is running some of our best stories of the year, as selected both by our writers and by popularity with readers. This story was originally published June 16. We will resume new content next week.

I grew up in North Tacoma, in a neighborhood of pre-war Craftsman houses. No one, regardless of their economic station, had air conditioning. In the fifth grade a kid transferred to my school – Ryan, I think – who overturned this established order. His mom was an Army wife out of North Carolina. Even on a modest officers’ salary, she insisted on a newly installed central air system for their home. The weather got hot, and Ryan enjoyed a brief, intense period of after-school popularity.

According to the U.S. Census Department, the Ryans of today are still enjoying their fifteen minutes. If you have A/C, chances are you may have been the go-to house this past week in Seattle. While the metro area only has one percent of the U.S. population, it accounts for nearly 10 percent of the households nationwide without A/C. That’s a staggering number. 85 percent of us have no central A/C, and 70 percent have no cooling system at all.

This isn’t just a regional quirk, a reflection of our mild Pacific Northwestern climate. Portland has roughly the same summer temperatures as Seattle, but is much more chilled, with only 62 percent of residences without central air. Nationally, only San Francisco can compete with us. There, 87 percent do without, but their average summer temperatures are about 10 degrees below ours.

Percentage of homes with no a/c

Create your own infographics

My friend and fellow data hound, Julie Anne, noted that the Seattle metro likely has more boats than it has air conditioners, if you extrapolate statewide figures and include unregistered rowboats and kayaks.

The thing is, this is a choice we make. In a lot of metros where central air is uncommon, like New York, single-room units are common. Not so Seattle, where we’re almost universally content to suffer through the hot days in lieu of purchasing a unit. On top of that, demand doesn’t seem to be rising that much. Nationwide, very few newly-constructed homes lack cooling. In Washington, a solid majority (58 percent) still do.

Look, Washingtonians are a hardy people. We endure the most overcast days, some of the worst traffic, and scattered flurries of dubious condescension from the Los Angeles Times. But heat? Unless you haven’t been on social media, or out of your house, you’re probably aware: our steely resolve melts at around 80 degrees.

I learned all the stats above one recent night, when it was 77 degrees in my apartment at four in the morning. Like many Washingtonians, I cope with mild discomfort by being a passive, complainy nerd about it. But it might be time to put up or shut up. And, if my social media feeds are any indication, we’re probably not going to shut up.

Part of me gets it. I grew up here. We have few opportunities for weather kvetching. Complaining about rain, needless to say, is off the table. No one kvetches about our light levels – they could, but it would be a full-time job in some seasons. Our weather may be gloomy at times, but it rarely tries to murder us or destroy our houses. The occasional snow flurry or heat wave represents our only opportunities for cathartic complaining.

Maybe our dysfunctional approach to heat is a little wimpy, but it’s the wimpiness we chose. Perhaps it’s because we need a source of collective commiseration. Perhaps it’s because we need a socially acceptable excuse to spend 20 minutes huddled within the walk-in beer cooler at Safeway. Whatever the case, I say we rebrand it into something more rugged. Seattleites reject both umbrellas and air conditioning. We proudly choose to be at the mercy of the elements.