How Seattle is feeding the hungry this winter

Food banks are facing long lines as they try to give clients healthy options for making it through the winter.
by / December 10, 2015 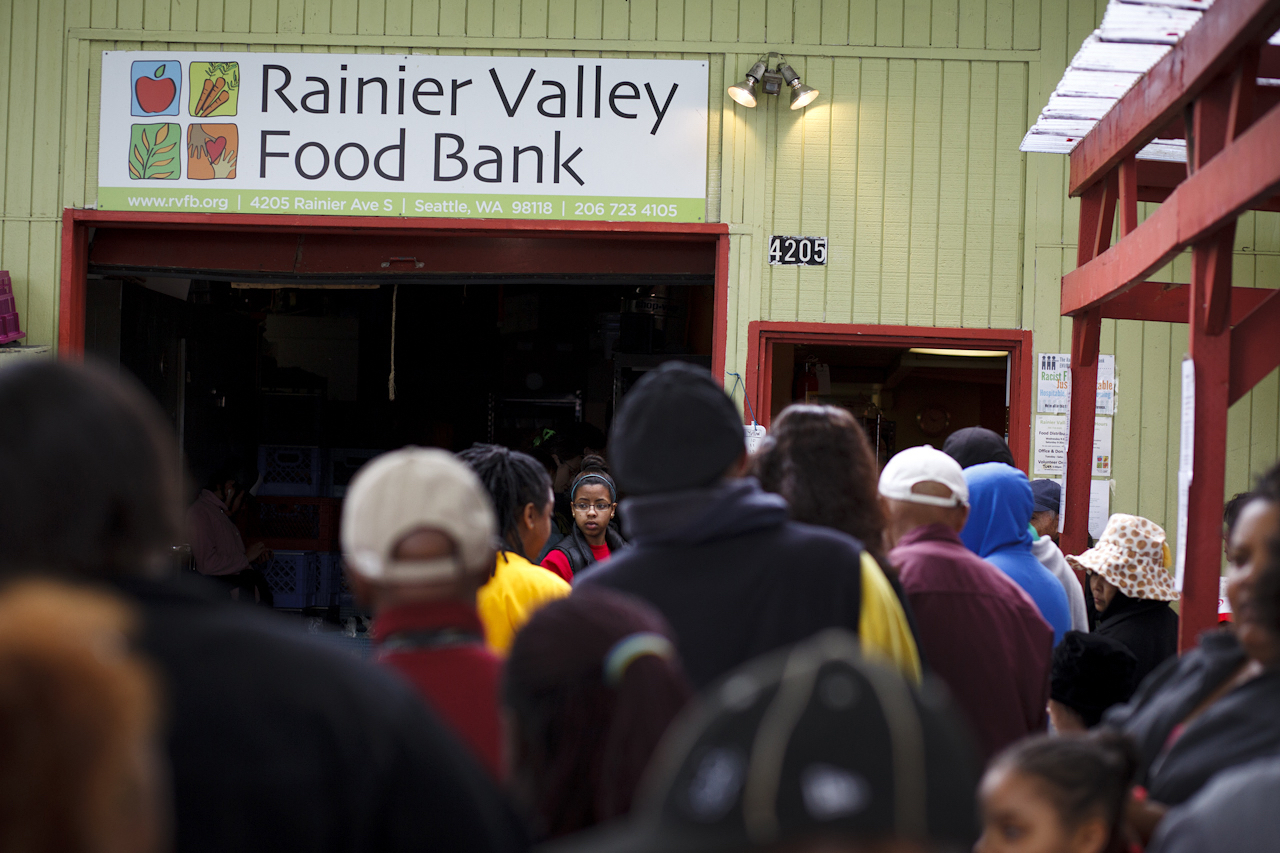 Food banks are facing long lines as they try to give clients healthy options for making it through the winter.

Take an easy stroll down Rainier Avenue just past Letitia and, depending on the hour, you'll hear the sounds of Big Band music, hip-hop, reggae or even European classical wafting from a store front. Pause and you'll hear laughter and animated chatter. The sounds aren't from a trendy restaurant or club. Something different is happening here. Teens and adult volunteers are unloading boxes of a critical treasure that's in surprisingly short supply for a city that prides itself on being progressive: food. This is the Rainier Valley Food Bank, a high-octane food distribution center whose mission is to provide healthy food for hungry neighbors.

Food insecurity and uncertainty about the next meal are all-too common, for those with and without a roof over their head. At an all-hands-on-deck operation like this, they're realities staff and volunteers are eager to make a dent in. Twenty-four/7, 365 days a year, they're sourcing and purchasing as much healthy food as they can lay their hands on. Last month this food bank saw the highest number of clients than any previous month since the Great Recession, which officially ended in the middle of 2009.

Recession over? Tell me about it, says Sam Osborne, executive director. A soft-spoken man whose biggest passion is “to feed people really good, healthy, delicious food," Osborne says client visits have tripled since 2008. Many are seniors who can't make it on a fixed income, children in families where food stamps have been cut or never existed, immigrants and those with deep family roots in the United States. Many come to supplement their food diet, often at the end of the month when money is tight after rent and medicine. Or when such costs as childcare and transportation have stretched economic resources to the limit. Others come as often as allowed, which at the Rainier Valley Food Bank is once a week.  To-go bag lunches for the homeless containing high protein sandwiches, fruits, juice and snacks are available five days a week.

“We give people hope for tomorrow,” says long time volunteer Wes Hall, the guy in charge of the music. When it comes to food, that means fundamentals like potatoes, onions, garlic, yams, tomatoes, greens, chicken and other protein, sweets and snacks, as well as specialty items clients request, such as bok choi and ginger.

Lili Fisher, food access coordinator, says there's a unifying power in providing healthy food to those who've been going without. She worked at several local organic and chemical-free farms, but once she learned how many people were going without such food, she concluded that the distribution side was critical.  There's plenty of really good food out there, she says, but it's not necessarily being distributed in the best way possible. “We try super hard," she says, "to close the food gap and provide quality food to hungry neighbors — food that's going to sustain and help improve their health.”

Many factors figure in the equation of why people to turn to food banks: cuts in food stamp benefits,  lack of living-wage jobs, Seattle's high cost of living, medical emergencies or the so-called food-deserts — neighborhoods that lack affordable, nutritious food because there's no grocery store. “Chief among them,” says the Rainier Valley Food Bank's Osborne “is that while the economy has recovered for some and there's development and cranes all over town, for many the economy never got better.” Their personal financial lives haven't improved at all, he says, and in fact have gotten worse because of rising rents and a steady increase in the cost of food. For a time, both rose gradually. But now, he says, “it's no secret, they're through the roof.”

Drop in on a food bank further north, the Ballard Food Bank, and you'll find another distribution hot spot operating at full capacity. People pack a waiting room, gathering there before they get a turn to shop in a separate brightly colored room with 40-foot high ceilings and crates and freezers full of food.  A little girl reaches for a bouquet of flowers. Jen Muzia, executive director, says they wanted to set it up like a regular grocery store, where “you grab a cart and pick up food and other items we have based on your choices and family size. It's really about giving people dignity, self-respect and worth, because they get to pick out what they want to feed their family.”

On average, 1,200 people come here a week from zip codes in Ballard, Magnolia and Queen Anne. Among the clients, 28 percent are seniors, 18 percent are children and 19 percent — nearly one-fifth — are homeless. “It kind of reflects what we see going on right now in terms of income disparities,” says Muzia, “and people really trying to make it work in communities they love and want to stay in, but are struggling to do that.”

There are all sorts of reasons as shoppers, preoccupied with making choices, made clear in quick chats. Only one shopper chose to identify herself and then only by her first name. A mother with two children said: “Sometimes we come every week. Sometimes once a month. It just depends. This place supplements, especially things we can't always afford like fruits and protein.” An older woman: “I took early retirement and let me tell you this sure does help, especially if you love to cook. Fancy potatoes and the biggest yams you've ever seen!”

A 30-something woman, Rachel: “My rent was raised $300 a month and I'm pregnant. I'm bringing my father home from the nursing home. So I came to the food bank because they're the only ones willing to help. They said when the baby was born, they'd also provide diapers and baby food.

“I'm going to bring my father home from the nursing home. But first I'm going to make apple pies for everyone at the home who don't have anyone looking in on them.”

Over a million and half visits were made to Seattle area food banks last year, according to Solid Ground, a social services non-profit that compiles statistics on 26 area food banks that receive state funding. On average, individuals made 11 visits per year. The 26 food banks, Rainier and Ballard among them, received $76,000 annually from the state last year, which they divvy up, depending on the number of clients they see. For Rainier that meant $6,000 a year and for Ballard it was $3,000. They also receive $153,000 a year from the state for bulk purchases, which all 26 food banks share.

On the homegrown side, Rainier Beach Urban Farm and Seattle Community Farm grow food for the Rainier Valley Food Bank in season. The Ballard Food Bank receives garden fresh veggies from nearby p-patches; 10,000 pounds alone last summer, says Ballard’s Muzia. But these sources aren't adequate for the volume of fruits and veggies both food banks like to provide, and that clients ask for.

Northwest Harvest purchases between 25 and 30 percent of all the food that it distributes, which gives them control in purchasing nutritious staples for the 380 partner agencies, including food banks, they work with, says Shelley Rotondo, executive director. The other 70 percent is donated from growers, farmers, packers and processors all over the state. Much of it is produce, says Rotondo, “highly nutritious and often expensive.” In addition, she says, they rely on food drive donations and donors for the many things they simply can't afford to buy, such as large quantities of tuna fish and nut butters.

Rotondo says Northwest Harvest has seen a small dent in the number of clients in Seattle and across the state since the recession, when it helped serve 740,000 people a month, compared to the current 700,000 a month. But, she says, “we have a pulse on all regions in the state and there is a great need.”

The link between cuts to food stamps, hunger, and long lines at food banks can't be underestimated, says Christina Wong, public policy adviser with Northwest Harvest. The food benefits under the federal Supplemental Nutrition Assistance Program or SNAP, have dropped dramatically since the 1990's. The biggest cut took place in November 2013, $5 billion dollars nationwide. "That cut alone," says Wong, "required us to double our efforts especially since Congress hasn't taken any action to restore SNAP benefits."

Back in 2008, Washington, was the first state in the country to allow a gross income of 200 percent of the federal poverty level to be eligible for food stamps, instead of the federal 130 percent. “It was essentially a way of opening the window a little bit further for working poor people,” says Claire Lane with the Anti-Hunger and Nutrition Coalition, a statewide non-profit.

In the complex saga that helps explain why so many rely on food banks and meal programs, there's another important thing to note. With welfare reform legislation in 1996, a requirement known as the Able-Bodied Adults Without Dependents or ABOD was enacted. If you're not working at least 20 hours a week or in some kind of job search or training, you're generally eligible for only three months worth of food stamps every three years. Under the bill agreed on by congressional Republicans and Democratic President Bill Clinton, says Lane, whole categories of people became ineligible for food stamps.

"So," she says, "if you were an immigrant to this country who was here legally but had been residing here less than five years, the feds cut you off." An immigrant had to reside in the US for five years to quality for food stamps. It explains some of the reasons for the long lines at food banks, especially those with notable immigrant populations like Rainier Valley.

Back at the Rainier Valley Food Bank, Sam Osborne makes sure he has ingredients for the main entree at this month's community lunch. He calls it his “Cure What Ails Ya” Soup. The Vietnamese-inspired recipe, popular with food bank clients, and rich in healthy vegetables, spices and protein, is one that anyone could appreciate at this time of year, especially those worried about feeding themselves and their families well.

This story has been updated since it first appeared to correct the spellings of two names.