Heritage Turkeys of the Year: Was 2015 a taste of things to come? 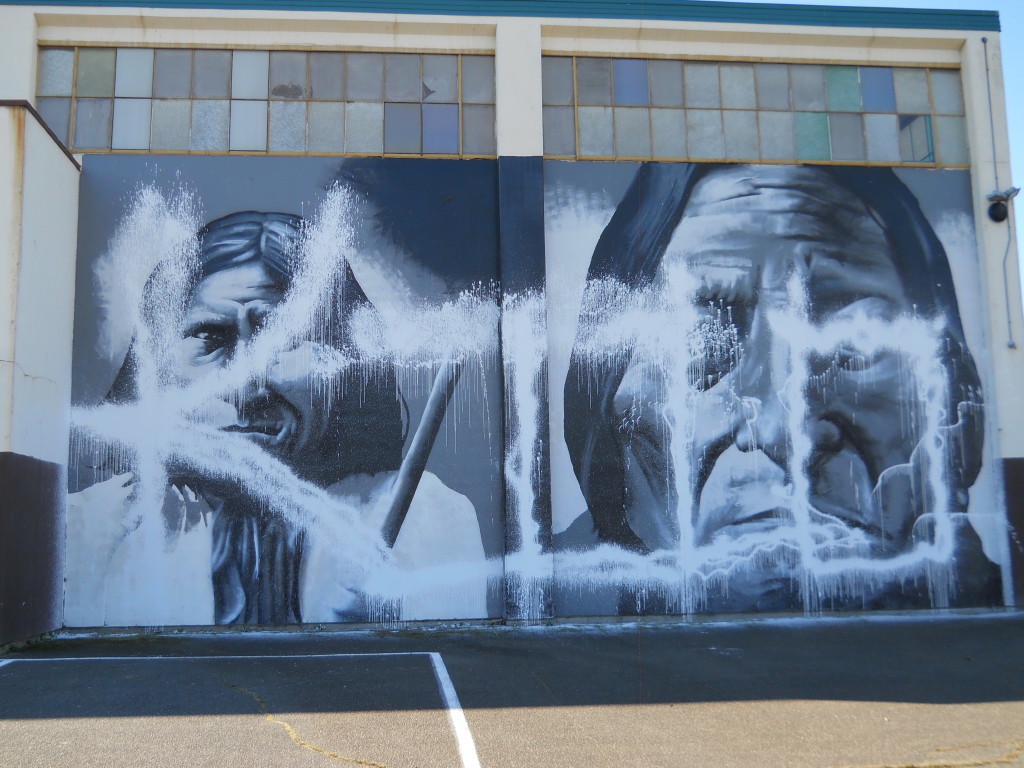 Vandalism at the Wilson-Pacific school in Seattle.

Another year, another Golden Age for Heritage Turkeys in the Pacific Northwest. For this seventh annual round-up, it’s time to reflect on some of the failures in historic and cultural preservation in the past year, some of them harbingers of the huge challenges ahead. There are the usual huge ongoing threats to heritage and development, with politics and greed among them. But as the climate changes, there are questions of whether this year brought a taste of what’s to come.

Land Rush Trumps Gold Rush: The Carmack House Demolition – George Carmack was the first Klondike millionaire. His gold discovery in Alaska kicked of the famed gold rush and put Seattle on the map. Carmack settled in Seattle and in 1902 moved into a lovely home in Squire Park. The city landmarks board voted to make the old home a landmark in 2009, but unfortunately it was vandalized and neglected. Worse, it was located on property adjacent to the expansion of Swedish Hospital’s Cherry Hill complex, raising its potential redevelopment value. For years, preservationists and neighborhood advocates tried to find an owner for the building who would restore it.  They even looked at moving it to a new site.

Many believed the house was one of very few Seattle structures that could help tell the story of the Gold Rush era outside of Pioneer Square. Unfortunately, before a savior could be found, it was quietly sold. In April it was razed before preservationists even knew what happened. At last check, the lot on E. Jefferson Street was still for sale. The property, which sold for $47,000 in 2007, is on the market now for over $1.4 million. That’s a lot of gold nuggets.

The Weather’s War on Heritage: Washington’s Wildfires & Climate Change – The impacts of drought and dry conditions have been devastating. Massive wildfires destroyed buildings and structures around the West. Nationally, heritage advocates worry about the impact of climate change on historic properties, parks, and archaeological sites by flood, fire and storm. Last spring was the driest in over 100 years on the Olympic Peninsula, and that spawned the Washington Post headline: “The West is so dry even a rain forest is on fire.” The Paradise fire in the Queets River drainage destroyed ancient old growth that cannot be replaced for centuries. Massive wildfires in Eastern Washington—the Okanogan Complex fire ravaged some 475 square miles— turned entire landscapes black. Lynda Mapes of the Seattle Times looked at the impact on the Colville Indian reservation where traditional hunting and gathering grounds burned:

“In a culture where the land is so much more than scenery, some of what was lost in this fire is beyond price. ‘It’s like your home, your spiritual church. You don’t just up and move to another church,’ said Lola Campbell, a cultural resources expert for the tribes. ‘Families have been going to these same places for generations.’” The impact on the Northwest is potentially huge, involving farms, ranches, fishing, maritime and logging industries, the supply or water and power. This year was possibly a dramatic sneak preview of challenges to come.

Mural Vandalism: An Inner Hate Crime? – The Seattle school district is building two new schools on the site of the old American Indian Heritage Middle College High School, an educational institution once devoted to the city’s Native American youth. It was decorated with beautiful, massive mural portraits of famed tribal leaders, including Chief Seattle, Sitting Bull and Chief Joseph rendered by Native American artist Andrew Morrison, art curator at Daybreak Star in Discovery Park. But earlier this year, the murals were vandalized with spray-painted graffiti. Morrison told the Seattle Times, “This is not an ordinary act of graffiti. It is an act of hatred and viciousness that has created heartbreak and confusion in a place where people are supposed to feel safe.”

No one has been prosecuted for the defacement, but Morrison told The Stranger’s Jen Graves that he has a suspect: a Native American student who formerly attended the school. Morrison said he still considered it a hate crime—“It's a lot of inner hate,” he told Graves. The good news is the graffiti was easily removed by pressure washing and the murals will be reinstalled when the new schools open in 2017.

The War on Preservation: Erosion of Iconic NW Historic Districts – Just because you have a great historic district doesn’t mean it’s “saved.” Ample evidence of the erosion of protections exists even for Northwest urban icons like Vancouver’s Gas Town, Portland’s downtown, and Seattle’s Pike Place Market and Pioneer Square. In Portland, citizens have been outraged over a “loophole” in a city statute that allows properties on its inventory of historic structures to be too easily removed for demolition. The folks at RestoreOregon are appealing a decision on two downtown buildings—the Hotel Albion and the Ancient Order of United Workmen Temple. These “saved” structures now face the wrecking ball. Heritage Vancouver has placed Vancouver’s Gas Town — a designated Historic Area since the ‘70s — on its 2015 Most Endangered list due to the city’s plan to eliminate preservation incentives that protect its historic character. Demolitions and negative impacts on the district’s historic roofline profile are also threatened.

In Seattle's Pioneer Square, the city overturned the rejection of a new building design by the district’s preservation board, arguing that zoned heights trump all other design concerns even in a historic district. Decisions like that could eventually lead to jeopardizing the district’s historic status. Mayor Ed Murray’s housing task force recommended this summer that the city require less design review in historic districts and the elimination of conservation districts. On top of that, the city council is considering new rules for the make-up of the Pike Place Market’s historic district oversight board, in ways that might well weaken protections. Though historic districts have played a key role in urban revitalization, the current growth boom is trumping foresight and stewardship.

You’re Busted, Indiana Jones: Illegal Artifacts Trade – In November, Washington voters overwhelmingly approved an initiative to outlaw trade in endangered species animal products and stiffen penalties for violators. The argument is that the trade in such things — like ivory — must be dismantled. Some could argue the same for the trade of Northwest native artifacts, which are often picked up illegally. Earlier this year, Oregon state police swooped in on a Klamath Falls dealer who was allegedly trafficking in funerary items from Indian graves. Meth paraphernalia was also reportedly recovered in the raid. Such connections are not uncommon: the link between meth dealers and illegal artifact hunting is well documented (see my 2008 story, “Indiana Jones, Meth Addict” for some background).

The morality of the artifacts trade was raised this year by Quentin Mackie, who blogs insightfully about Northwest Coast archaeology. He questioned First Nations artifacts for sale in a British Columbia antique shop, many of which were likely grave objects. “I don’t think it is right to offer these artifacts for sale. It encourages a market in these items, which encourages looting. The artifacts arguably belong legally to the Crown, and morally to the First Nations.” Another controversy arose this year over a planned auction of relics related to the Japanese internment camp at Manzanar in California. A spokesman for a group called the Ad Hoc Committee to Oppose the Sale of Japanese American Historical Artifacts denounced the trade saying it “is reminiscent of other auctions of belongings, whether they were relics from slavery, Native American cultural and religious artifacts, or items stolen during the Holocaust.” Most folks would likely agree, at least in theory, that grave robbing is bad, but it’s time for a larger discussion about the ethics of trade in antiquities.

No Nukes: The UW’s Demolition Obsession – In 2008, the University of Washington was on tracked to demolish More Hall Annex, a unique structure also known as the Nuclear Reactor Building. A marvelous cold war era relic, the 1961 structure was home to a small “teaching” reactor used to train future nuclear engineers. Long decommissioned, the Brutalist-style building remains and is a unique example of a remarkable collaboration of prominent UW architects who designed a structure with windows that made the once-secretive nuclear process transparent to the public. Advocates of the building pushed back against the university’s demolition plans for the building and successfully got it listed on the National Register of Historic Places. Building saved, end of story, right?

Nope. The UW is back with a new plan for expanding their computer science program and the preferred option is to take the building down. Alternative plans seem half-hearted at best, hostile to preservation at worst. Seattle preservation groups are opposed and pushing back during the Environmental Impact Statement process. A nomination for the structure had been submitted to the Seattle Landmarks Board, but the UW is reportedly going to resist that. What deserves a Turkey Award is the UW’s consistent refusal to commit to preserve the building and craft a plan that respects its architectural and historical importance. The fight isn’t over, but there shouldn’t be a fight at all.

A Cancer in Peace Valley: That Damned Dam Project – You’d think that massive new dam projects would be a thing of the past in the Pacific Northwest, but BC Hydro is pushing ahead with a third Peace River dam — at the so-called Site C. They claim the nearly $9 billion is a renewable energy project; critics say the British Columbia dam will power more fracking and natural gas extraction in northern Alberta. What it absolutely will do, according to Canada’s National Trust, is flood some 31,000 acres of gorgeous land featuring century-old family farms, 78 First Nations heritage sites and burial grounds, and more than 300 archaeological sites.

In other words, from a heritage standpoint, it’s a disaster, which is why it’s made Canada’s national Most Endangered list. Project opponents are hoping the new government in Canada will rethink the wisdom of moving ahead. A tribal association has built an observation platform to monitor preliminary construction work and document infractions related to construction. Already, forest lands are being stripped away. Tribes claim the project violates their treaty rights and Amnesty International has stepped in to oppose the project. Legal appeals are ongoing. One local opponent described the project in relation to BC’s premier who backs the plan: “Site C stands for Christy Clark cancer of the Peace Valley."

Saga of the Great White Worm: Rare Species Denied Protection, Again – The great white earthworm of the Palouse is a legend on its home turf in southeastern Washington and Idaho. The rare worm is long, pale, and possibly lily-scented. It's believed to be a rare survivor of prehistoric glacial scraping and, in more recent centuries, the plowing under of the rich prairie soils of the region. Decades passed without a single great white being found—the species is so rare that little is known about their populations, breeding patterns, behavior or range. They seem to survive mostly in the tiny remaining patches of native prairie and earlier this year three specimens were found on Paradise Ridge south of Moscow.

Scientists and biodiversity advocates have sought their federal protection under the Endangered Species Act. Development and agriculture are deemed a threat to their survival. The problem: uncommon though they are, there is no study that demonstrates that they are in fact endangered, though common sense suggests otherwise. Still, repeated efforts to get protection from the U.S. Fish and Wildlife Service and the courts has thus far failed, including an appeal at the 9th Circuit this year. The decisions put researchers in a bind: find and kill more rare earthworms to prove they are rare and dying out, or allow a unique species to have its habitat destroyed.