In today's headlines, echoes of our fascist past

The Northwest was once a bastion for fascism in America. What this period can tell us about modern times.
by / December 10, 2015 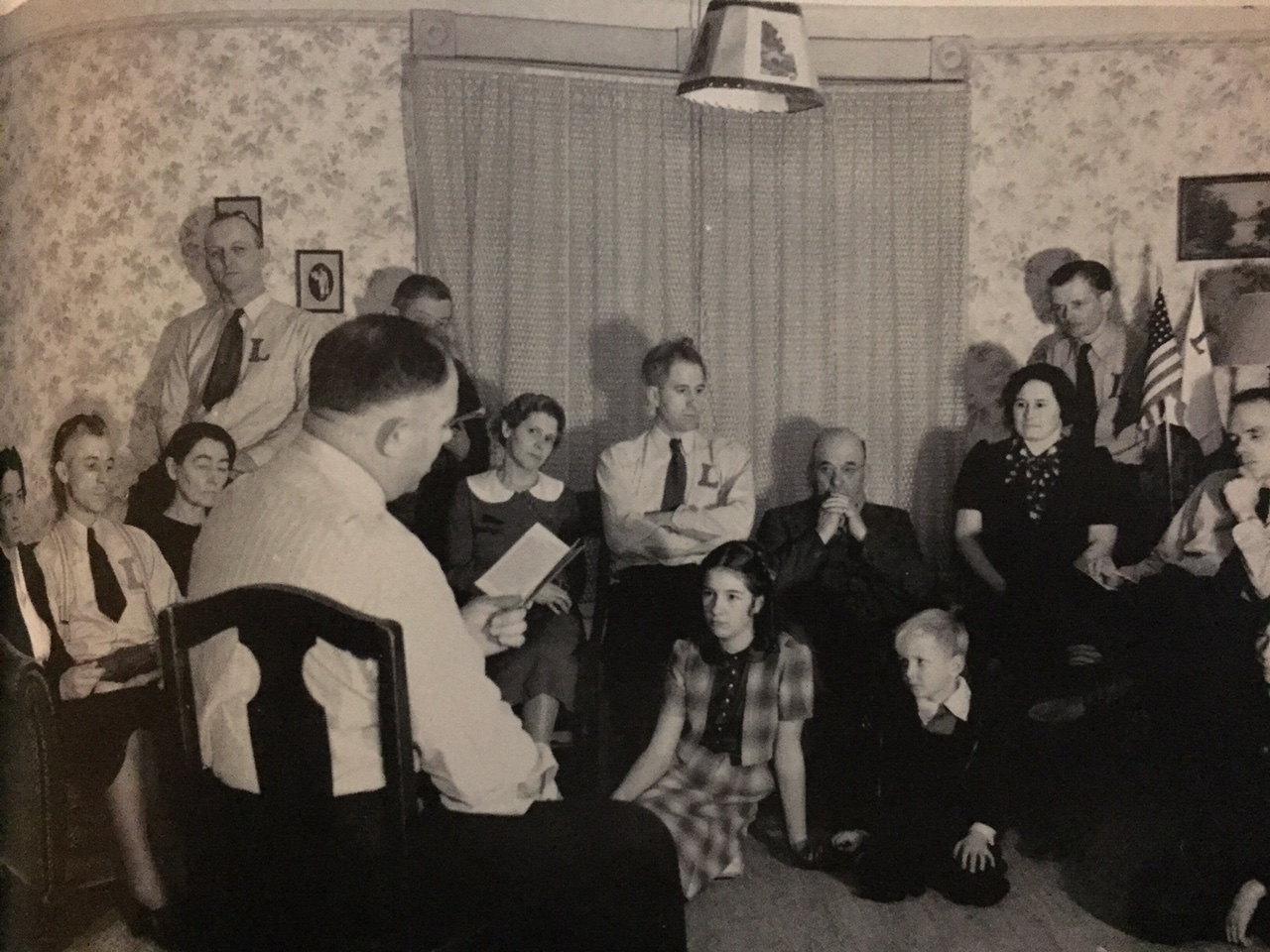 The Northwest was once a bastion for fascism in America. What this period can tell us about modern times.

This is the second of a two-part series about fascism in the Northwest during the 1920s and '30s. Read part 1 here.

In 1936,William Dudley Pelley, the head of the American fascist organization popularly known as the Silver Shirts, ran for president of the United States. He appeared on only one state ballot—in Washington. Pelley believed that he was destined by God to help bring about a “cataclysm” that would defeat the "world Jewish conspiracy," Communism, and the New Deal and turn American into a true Christian Commonwealth. He was soundly defeated in the Roosevelt landslide of that year, a setback to his plans to ascend to the presidency.

Despite the setback, the Washington State campaign paid off in other ways that gave Pelley new hope for his Hitler-inspired national Storm Trooper-style operation. The presidential campaign had surfaced supporters in the Evergreen State who would serve him very well in the next few years. They included Silver Shirt organizer Roy Zachary of Seattle, who was appointed as his national field marshal. Zachary traveled the country, spreading the message of hate, acting as troubleshooter and recruiting new members.

Pelley, also known as The Chief, found an attorney, Floyd Hatfield from Everett, to help him with some of a mounting number of lawsuits Pelley and the Silver Shirts were embroiled in, as well as Congressional investigations into his activities. The Chief appointed Orville Roundtree, the Christian Party’s Third Congressional district candidate, a businessman and member of the local Methodist church in Chehalis, to run the Washington State Silver Shirt organization. Roundtree spoke throughout the region and proved a solid fundraiser. For a group—some would say cult—beset with financial, legal and unfulfilled prophecy problems, Washington’s talent pool proved to be the group’s rock.

In 1939, LIFE magazine profiled American fascists and focused on the Silver Legion’s state headquarters in Chehalis. The magazine called the Chehalis group a “cell” and listed Pelley as one of the country’s “Voices of Hate.” They were pictured as misguided small-town Americans.

The Silver Shirts objected to their portrayal, but Northwest novelist Robert Cantwell, a progressive who had grown up in the timber country of rural Lewis County, wrote a letter to the magazine arguing that the Silver Shirts in Chehalis and Centralia flourished because of their past and conditions, not an inherent attraction to radicalism. “Fascism cannot be explained only in terms of fanaticism,” he said, "the history of the places where it gains a lodging must be taken into account."

The Depression hammered the middle class, the resource economy was hurting, real estate values for homes and farmland were down. The counties hardest hit by the Depression in the early ’30s were counties where the Silver Shirts were strongest, including Lewis County. Orville Roundtree recruited door-to-door there and noted that the business owners most impacted by the Depression were often willing to sign on.

Reactionary rage from conservative Protestants had been seen in that area before and was fresh in people's memory, as Cantwell pointed out. American Legionnaires perpetrated the Centralia Massacre against IWW union members in 1919. Three Wobblies were killed in a gunfight and one was dragged from jail and lynched. In other words, this was already fertile ground for fascism. A local newspaper, the Centralia Tribune, was the only openly pro-Silver Shirt newspaper in the state. Its publisher was a member.

The Silvers did make an impression on local Jewish residents. In an oral history on file at the University of Washington, Eva Goldberg, who lived in Centralia during the Depression, described a Silver Shirt encampment there as a “frightening experience.” She watched men in uniform pass out leaflets. “They were troubled times with the Silver Shirts,” she remembered. Goldberg moved to Olympia and found them there too, which was unnerving. “I suppose this is something that never leaves you.”

Another Jewish resident, Jerry Robinson, questioned how bright the Silver Shirts were. In another oral history interview, he recounts how, in the ’30s, they bought shoes at a Centralia shoe store where he worked that was managed by a Jew, then bought their silver shirts from the Jewish-owned Shandling’s clothing store across the street.

The Legion was less welcome elsewhere. In 1938, some 700 protesters, many members of the lefty League for Peace and Democracy, showed up at a Silver Shirt lecture in Spokane, roughly double the number of fascist attendees, and tried to block the hall. The police arrested 11 protesters, but the local judge said he was not inclined to prosecute, given reports of the Silver Shirt doctrine, according to Seattle’s Jewish Transcript newspaper. Another event in Chicago was more violent: field marshal Zachary received head injuries from a beating.

Some Washington unions also pushed back. The Timber Worker, published by the International Timber Workers Union, attacked Zachary after he spoke to a crowd of 300 at Manitou Hall in Tacoma. Zachary was in hot water for having allegedly threatened the life of FDR. “Rats like Zachary and other Silver Shirt leaders are would-be Hitlers,” read the Worker’s editorial, “and they would do away with democracy!”

Desperate for members and money, the Washington Silver Shirt recruiters began to draw on other groups. In Skagit and Whatcom counties, most of the Silvers were said to be former Klan members. The Klan had mostly died out in the region by then and the Silver Shirts were skeptical of the Klan’s aims and tactics. Pelley also outlined an approach to fund-raise from the local Japanese community. In the march up to the war, he found Imperial Japan sympathetic and thought they might steer money to the Silver Shirts via bulk subscription orders to their magazine (outright donations might raise the eyebrows of Congressional investigative committees). Washington organizer Roundtree was skeptical and wanted to make sure to keep the organization “Aryan.”

In reviewing of the correspondence of the Washington Silver Shirts, one gets the sense of increasing dissension and financial desperation as WWII nears and Congressional scrutiny of American right-wing and fascist groups intensifies. After Pearl Harbor, the Silver Legion was essentially kaput. In 1942, Pelley was convicted on multiple counts of sedition and sentenced to 15 years in prison. He spent the war years behind bars and wasn’t released until 1950. Some of his associates, including Seattle’s Roy Zachary, were banished from the West Coast under the same powers that allowed Japanese families to be sent to internment camps.

Pelley seems to have largely given up politics, if not the occult, after the war. New Age spiritualism and UFOs seem to have been of more concern, though he didn't give up his anti-Semitic views. But American fascists did not disappear. On the eve of war, hate groups had begun to re-brand and soften their image as America began to go to war against Hitler and the Axis. The Jewish Transcript was on to this trend. In a 1942 story titled “Camouflage Fascists,” the writer notes that followers of hate-groups like the Silver Shirts were adopting “harmless covers” with new names like the “Paul Revere Sentinels,” “We, the Mothers,” and the “American Society for the Preservation of Sacred and Patriotic Music.”

Openly Nazi groups didn’t reemerge strongly until after the war, but the influence of the Silvers on Northwest neo-Nazis, white power groups and far-right politics has been profound. A former Oregon leader for the Silver Shirts, Henry Beach, co-founded the Posse Comitatus. Richard Butler of Aryan Nations fame was a former member, as was Gerald L.K. Smith, founder of the Christian Identity movement. Another interesting connection: onetime conservative Republican Congressman Jack Metcalf’s father, John, a commercial fisherman on Whidbey Island, was a Silver Shirt—not a passive member but an active organizer and recruiter. Even today, white supremacists and separatists are active in the region, some promoting an all-white Northwest “homeland.”

While modern fascists have mostly been relegated to ultra fringe status, the echoes of the rhetoric currently being heard in the Republican presidential campaign should be a reminder of how extremism can be mainstreamed. As nutty as some of William Dudley Pelley’s political and theological ideas were, many of his themes—ultra patriotism, paranoia, race and ethnic hatred, rage at Wall Street’s bankers, belief that the U.S. government is illegitimate, etc.—are in the daily headlines. Many of the people mouthing them, or cheering on those who do, are not marginal figures who hole up in compounds in Idaho, but are the same kind of white, middle-class Christians that once formed the bulk of the Silver Shirts.

One of the most unsettling aspects of the movement was its sense of normalcy, and its self-certainty. As Ruth Bauer, a former Washington Silver Shirt, said during an interview with scholar Karen Hoppes in 1980, the Silver Shirts were “just like everybody else. We had the same background, the same perspective. The only thing that separated us from the rest of the state, was that we knew what to do.”