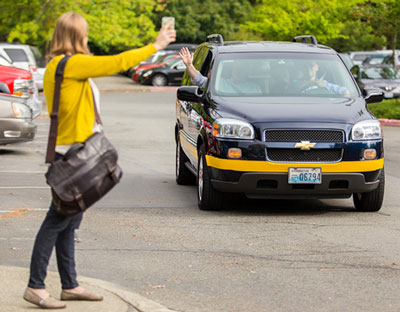 Metro TripPool vans will give riders a lift to or from a nearby park-and-ride lot.

In much the same way that people call for an Uber, some local transit riders will soon be able to request a carpool to their nearest park and ride. King County Metro is partnering with real-time carpooling app iCarpool to allow riders in select areas to catch rides with volunteers to a park and ride, where they can catch a bus.

It's one way that Metro can meet the heavy demand for park-and-ride spots without expanding lots or building parking garages.

The TripPool pilot program is planned to be rolled out later this year, or early 2016. The service will be available in Mercer Island and southeast King County.

For the program, Metro will provide vans to volunteer drivers. At any time, riders can log in to the iCarpool app and see rides near them. The rider makes their way to the pickup spot, where they will be picked up by the driver. The rider pays through the app and is charged 26 cents per mile.

In addition to providing the marked van, Metro also pays for gas, maintenance and insurance. Unlike with Uber, the driver makes no profit.

TripPool users have reason to take advantage of the service. Riders and drivers receive a guaranteed spot at the park and ride, and they can access any high-occupancy vehicle lanes along their routes.

iCarpool President Amol Brahme stresses the differences between services like Uber and the ridesharing app iCarpool. “We are a transportation platform that is peer-to peer, not involving a paid or ride-for-hire driver. The driver is not going to come to you,” Brahme said. “The only similarity that’s there is transportation.”

It was designed so that it would work for transit programs, as well as independent drivers who simply want to share their commute with others and be reimbursed mostly by riders for their costs. The app is available on Google, Apple and Microsoft phone operating systems. For drivers and riders who want to connect independently of a transit system program, the application is rolling out city-by-city. It started in Redmond on Nov. 2, and will later roll out in Downtown Bellevue.

Metro started looking into app-based solutions to track the routes and schedules of its commuter van programs in 2013. The partnership with iCarpool sprung up from this search.

One of the TripPool program’s greatest assets is the lack of commitment required for passengers. According to King County Metro Market Development Supervisor Carol Cooper, riders don’t have to go at the same time every day to get a ride or pay monthly, as is common with many carpool programs. A different group of riders can travel together every day. Even drivers get some leeway: Each TripPool van will have two people assigned as drivers to ensure reliability. Drivers are responsible for coordinating with each other to make sure at least one of them is available to handle the driving each day.

According to King County Metro Supervisor of Rideshare Operations Syd Pawlowski, Mercer Island was chosen because it is a fairly isolated community with a well-defined pool of users. The island also has a problem that isn’t unique to their park and ride: there are more cars than there are parking spots. (According to Sound Transit Public Information Officer Bruce Gray, most regional park and rides are full before 8 a.m. in the morning.)

“If we can get more people in one vehicle to access the park and ride and guarantee the parking space for them, we can increase capacity and improve access to transit,” Cooper said.

Use of the Mercer Island Park and Ride has increased in the past year. According to Cooper, when King County Metro cut its services in September 2014, many of the routes providing service to the park and ride were cut. As a result, more people had to drive to the park and ride to catch their bus.

While it's far too early to know how well it will work out, TripPool is being tried as a way to tackle one important part of Metro’s entire service.

“This is our option for what’s called the ‘first mile solution,” Pawlowski said. “That’s how you get from your residence to your public transit service.”

Matt Spaw, a former intern at Crosscut, is a journalism student and a writer at The Daily of the University of Washington.