Policing as a force for human rights: A talk with India's first female police officer 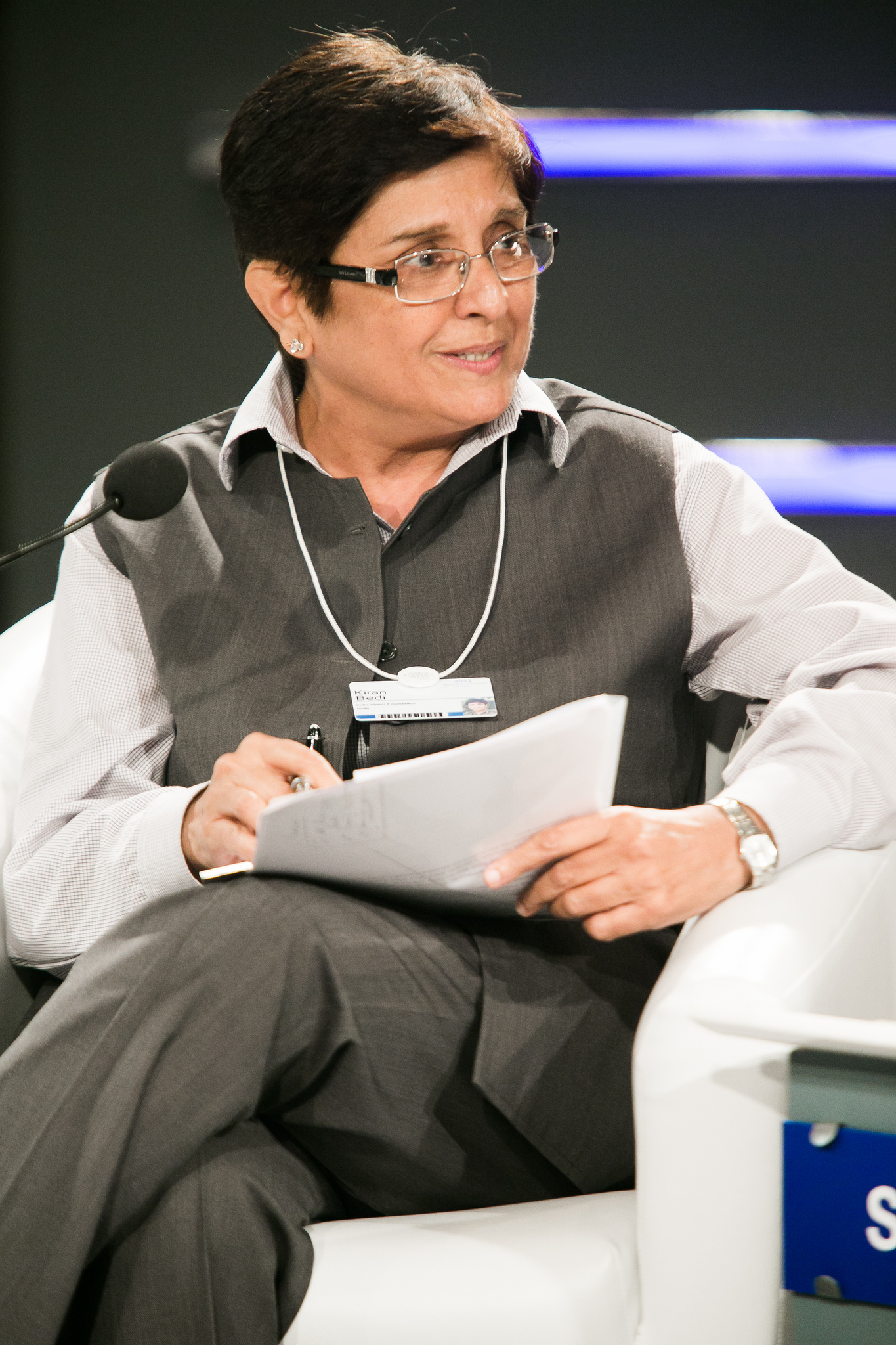 Dr. Kiran Bedi was the first woman to join the officer ranks of the India's Police Services. Thirty-five years later, she has built herself a staggering resume of creative policing, social activism, prison reform and women's advocacy.

She was in town last week for the 7th annual Global Washington Conference. With the cloud of the Department of Justice settlement hanging over the Seattle Police Department, it's a bit of a surprise to hear Bedi describe policing as the greatest force for protecting human rights. But her point is that police are some of the most powerful figures in society, a power that can be harnessed for immense good.

In India, Bedi disrupted and reorganized policing at every post she held. As a result, she was constantly moved around, often because of the efforts of higher-ups to bury her. But she always managed to bring change along with her.

This was never more obvious than in the work she did in prisons, bringing education and meditation to their sterile halls. As a result of her work, she was appointed as the Police Advisor to the Secretary General of the U.N. and in 1994 was awarded the Ramon Magsaysay Award, a prestigious prize sometimes referred to as the Asian version of the Nobels.

Crosscut caught up with her at the Four Seasons downtown. Our interview has been edited for length and clarity.

I understand you were the first woman in the Indian Police Force.

Was being the first woman in the officer ranks challenging? Can you talk about that experience?

So it was difficult for others, not for me.

The normal policing is always a reactive policing. It’s all punitive – it believes in punishing. It is, obviously, supposed to get people punished for breaking the law. It also is reactive because it is supposed to respond to situations. It’s bound to be punishing because people like to see the wrongdoers be punished.

But that’s part of policing. That’s not the whole of policing. I believe in the power of prevention. Policing should prevent as much as possible and then detect what is not preventable. And then certainly punish people for what they did.

In a lot of the United States, police make that initial contact and then we have other systems — social workers, foster families — that deal with the latter half. Why is that problematic?

It’s not problematic. All it has to be is integrated as a criminal justice system. The key is it has to be collaborative. Because if you work with very water tight compartments and the right hand does not know what the left hand is doing, who is the sufferer? The sufferer is the common man who is going to be the victim of crime and the sufferer is the taxpayer who is paying for the policing.

Therefore, yes, you need social workers and foster families, but someone has to integrate.

So when you entered the police force, what steps did you do take?

We need a justice system which, in the end, if it gets a criminal in the net, has an exit door where a man can leave with a dry-cleaned mind, a dry-cleaned soul, so the whole system who has paid for him, sees the benefit. That, for me, is right policing.

And then I created a new system called the beat box system where the beat officer would sit in the heart of his beat for some hours in the day so people could connect with him. I had no money, but people donated money so the beat officer could have an office. I had about 160 beat boxes.

What was the beat officer doing? Walking the beat, picking up information and finding out who were the past criminals in the beat. They’d call on them and say, ‘How are you doing, friend?’ He says, ‘I’m fine, I’m going to school.’ Great. So [the beat cop] knew the good, the bad and the ugly, but his duty was to help the ugly get out of the ugliness and be in a normal system.

It won the trust of the people. And once you win the trust of the people, the amount of information that flows is unbelievable. People became the eyes and ears. I had so much information that the people in my district who had committed crimes either left or settled themselves. Did I spend anything extra? Nothing. I just reorganized the resources, involved the community and did my duty in the right way — to listen and reward those people who deserve to be rewarded.

We found murder cases where some people had murdered their daughter or daughter-in-law and people would call and say that’s a murder, not a suicide! We would reach out, take the dead body and find it was murder. Even mothers whose boys and girls — mostly boys — were dropping out of school. They would inform the police and say, 'My son is dropping out of school getting into a drug habit, I need your help.' The beat officer would go and find out, ‘Why didn’t you go to school, son?’ and help him go back to school. It’s early prevention.

How much of a drop in crime did you see?

So I understand you have a nickname, Crane Bedi.

And I understand that is the result of you moving a higher official’s car — with a crane?

I wonder if you can talk about what I believe you called ‘Equitable Policing’ and how difficult that was to administer policing on high-ranking people?

It was the simplest thing to do. I became the deputy commissioner handling traffic for the entire city of Delhi, taking care of unruly car drivers who weren’t in the habit of parking in lots. At that time, only the rich could afford a car. The rich didn’t care about policemen because [the policeman] didn’t have proper prosecuting powers.

So when I took over, we were heading for the ninth Asian Games [the largest regular multi-sport event after the Olympics]. And I wondered, ‘How do you run the Asian Games?’ if people don’t have a respectable role in traffic management?

I realized about half of the roads were clogged because of parked vehicles. They wouldn’t go because they wouldn’t respect the police. So I told [the police officers] ‘Go for the VIP because that will send a larger message.’ Don’t go for the small fish, go straight to the big fish.

One day, the big fish [for towing] was the Prime Minister’s car. The Asian Games were a great success because everyone was falling in line and going to parking lots.

Did you see backlash from people who were higher up?

Backlash is bound to come. But you can’t be afraid of a backlash while doing your duty. You have to take backlash as it comes. The backlash came as a result of this high-level enforcement and they transferred me out soon after it was over. I was of no use anymore.

At every posting of mine, as I did my time, as soon as I reached my very highest peak, somebody came to take it away.

Eventually you moved into working in prisons, which is where you’ve received most of your accolades.

The prison assignment also came out of saying, ‘Let’s push her into the backyard.’ Because a prison assignment at that time was a backyard posting. Today it isn’t. It turned out to move into the foreground, because so much reform happened that it brought me the Asian Nobel Peace Prize. It came in the middle of my posting.

When you came into the prison post, what did you find and what steps did you take?

My whole objective of coming here today is to offer to the international community, particularly to the developing world: We have a solution. Just because it’s coming from India does not mean it should take you very long to understand it. Suppose it had come from one of the elite universities: It would have already been implemented.

Every prison is a city! You go into city management there: What currency do you have inside the prison? You’ve got hand skills and you’ve got minds. All you have to do is channel them differently. My whole approach is you’ve got to work on everybody inside. There are retired professionals all over the country. They will volunteer time. [The prisoners] all have a skill. Why can’t we tap that skill?

I ran a school for 10,000 prisoners at zero cost to the government, from nine to eleven daily. When many prisoners came they were illiterate. When they were leaving, they signed their name!

We even had meditation programs. It was non-religious. It’s called mind management. It cost me nothing. Again, volunteer time. The world is full of people who want to give. Watch the film Doing Time, Doing Vipassana. It’s all about understanding the way the mind functions, the way the mind drives you to crime, the way the mind takes you back to correction.

I’ve heard you talk about the importance of connecting police and prisons. Can you expand on that?

Prison and police must work together. I’ve never seen these two departments working together. They didn’t work with me also. The criminal justice system, if it all works together, people get a safer society.

What is the worst consequence of those two not working together?

They repeat crime. Recidivism. Gangsterism. Bigger threat. When they live in the prison unattended, left to themselves and not restored to society, who suffers? It could be anybody. Anybody could be a victim.

Gang formations happen in prison if you do not manage the time inside the prisons. What I did was, the prisoners and the whole system was run like a boot camp. You get up, you do your yoga, you do your vipassana, you do your cleaning and everybody comes to class. I didn’t give people any option to come to class, but the fact is, they all came. Because they said, why should we waste time? Why can’t we learn something? But through the learning process, the negative is getting pushed out and replaced. A better thought means less crime. So as those good thoughts settle down, the negativity goes.

Here you have so many government departments and even volunteers. I’m sure Microsoft and others, they could say, We’ll run major computer programs gratis.

Universities in India runs graduation programs, masters programs, free in all prisons. They said, 'This is what we would do for a cause.' Why can’t this happen anywhere else? India’s not the richest country.

What advice do you have for the Seattle Police Department?

Send them over to Delhi. They’ll get training in Delhi. Nobody’s coming from here to Delhi. Because they think there’s better technology, better training programs here. But I have better human technology back there.