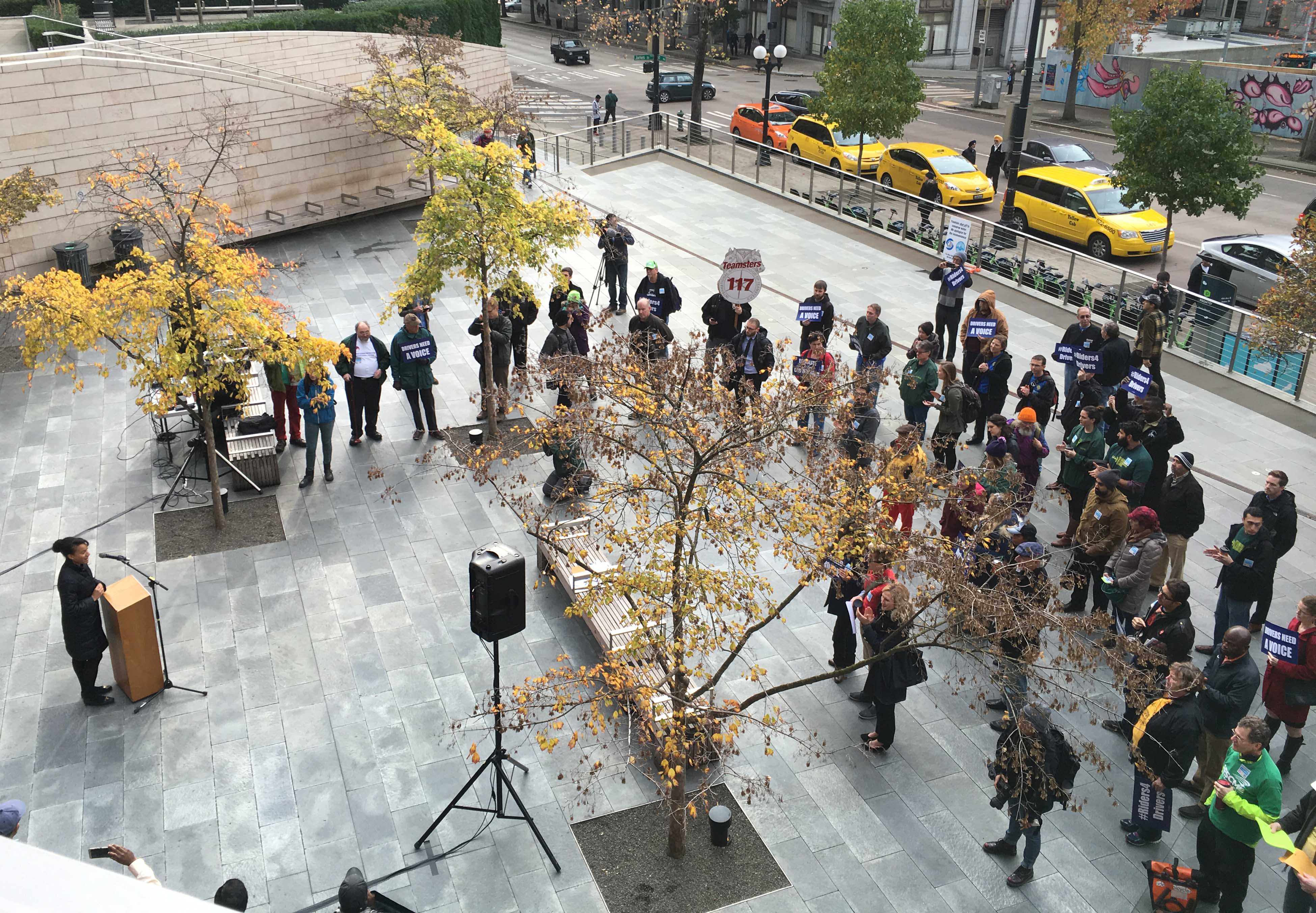 The Seattle City Council stuck its neck out into new territory Monday as it unanimously approved legislation to allow drivers with app-based, ride-hailing companies to collectively bargain. The effort, led by Councilmember Mike O’Brien, is the first of its kind.

Mayor Ed Murray had been largely silent on the matter until Monday, when he voiced his concerns in a letter to the Council. He said in a statement Monday evening that he would not sign the bill. However, he also said he would not veto, an apparent recognition that the Council has enough votes to override it.

Now, the Council will sit back and wait as its questions are answered: Will other cities follow suite? Will it withstand inevitable lawsuits from companies like Uber?

Even with the measure headed to final enactment without the mayor's signature, Uber will certainly try to head off unionization.

Since their creation, ride-hailing services have happily existed on the edge of regulation. The industry's strongest and most consistent argument on behalf of its model — “partnering,” as Uber says, with drivers one ride at a time — is that it allows for flexible work schedules and can supplement other work. In the background of a Central Area bar last Friday, on a TV mounted high on the wall, a PR campaign against Monday’s effort flickered between scenes of the TV edition of Terminator 2. One by one, a diverse cast of Uber drivers spoke of the freedom and flexibility that comes with working for a ride-hailing service.

Not everyone thinks that flexibility benefits the right people. And the blanket coverage from companies like Uber and Lyft — placing ads on TV, the Seattle Times and Stranger websites, and the radio — in the weeks leading up to Monday’s vote is surely a reaction to the fear of losing that space carved out for the technology driven gig-economy of hiring one job at a time.

As it stands now, the City’s legislation would certify non-profit organizations as eligible to represent drivers. These organizations would receive a list of all the drivers in the city that have performed a minimum number of trips and will have 120 days to show that a majority of these employees want to be represented. When the employees desire for representation is verified, the non-profit will speak on behalf of those drivers, in theory giving the gig-drivers more of a voice in Olympia and beyond as well as an agent to bargain with the company for better pay and working conditions.

For O'Brien, that voice should be a given. “Companies like Uber and Lyft are innovating in terms of their technology and how they deliver services,” he said prior to Monday’s full council meeting. “They are also innovating in how workers are being treated. Some of that, frankly, is not innovation. A company making billions of dollars while their company is making minimum wage — that race to the bottom is something that’s the oldest trick in the book.”

The recent ads are a part of the famed lobbying efforts of TNCs, especially Uber. Uber’s strategy advisor David Plouffe, once the architect of President Barack Obama’s immensely successful 2008 campaign, spent time in Seattle recently to speak against O'Brien's efforts. Uber representatives reportedly made their rounds lobbying council members ahead of Monday's session to vote against the measure.

Some of the debate is about expectations, such as whether driving for a TNC should be full-time work that people can rely on for a good living or something that is more about creating options. "Uber is creating new opportunities for many people to earn a better living on their own time and their own terms,” said an Uber spokesperson in an e-mail Monday. The spokesperson linked to a survey of drivers. The main takeaways of that survey were that drivers are diverse and that “Uber fits around drivers’ lives, not the other way around.”

"Drivers say that with flexible and independent work with Uber," continued the spokesperson, "50 percent of them drive fewer than 10 hours a week, 70 percent have full-time or part-time work outside of Uber and 65 percent choose to vary the hours they drive 25 percent week-to-week."

That is surely the case for many drivers. But for those who do see it as full-time work, the story is not always so happy.

Peter Kuel turned in his taxi license in order to drive for Uber a year ago. “As a driver, we have our issues: price, tips, insurance and deactivation,” he said. He said he often fears deactivation by the company from unfair poor ratings – he told a story of refusing to drive five people in his car that only fit four and being given a zero. He also doesn’t believe that tips are included in the overall fare. “They say its included,” he said, “but I don’t get it.”

After the measure passed City Council, he said it was “very good.” He added, “We all collectively want to work together,” he said of TNC drivers. He believes O’Brien’s bill will allow them to do that.

No representatives from Uber or Lyft spoke to the Council on Monday, but several drivers, all of them from the company Eastside For Hire, asked that the council to wait to pass the measure. Abdul Yusef said this legislation will negatively impact for-hire cars – the kind one might book in advance for a ride to the airport – and feels for-hire drivers were excluded from the conversation. “I’m not saying it’s good or bad,” he said, “but don’t decide for us.”

Both Seattle and the broader Washington State already understand the headaches associated with wrapping legislative arms around what is a new and emerging form of business. In 2014, the City tried to cap the number of TNC drivers on the road, but capitulated and removed the limit. Last May, Gov. Jay Inslee signed a bill that created a stricter insurance framework for app-based drivers, requiring liability minimums and per-passenger insurance coverage. That bill still stands

But O’Brien’s most recent legislation has particularly caught the attention of the hugely successful TNC industry. Representatives have all but guaranteed a lawsuit. At issue is whether the National Labor Relations Act affords the right to bargain to gig-based employees. When he introduced the bill last August, O’Brien said his interpretation was that the city is within its legal authority to pass this ordinance. TNC representatives, however, have called it obviously illegal. (Crosscut recently published an in-depth piece on the challenges ahead, including the difficulties of tracking employees in an industry known for its churn.)

Dawn Gearhart of Teamsters 117 contends that the city's proposal is based on a bargaining approach that has worked elsewhere. Benaroya Hall, she says, must sit down with its musicians. Likewise, agriculture workers are often allowed the right to bargain.

Leading up to Monday’s vote, a number of council members expressed concerns about walking into complicated litigation. The Council communicated extensively with the City Attorney’s Office and the Office of Finance and Administration, revising the original legislation on the recommendation of the law department to make it more legally waterproof.

But with its unanimous vote, the Council put aside caution in favor of action on behalf of the workers. Councilmember Tom Rasmussen acknowledged that the city may end up fighting in court for some time to come, but added, “That’s the price of innovation.”

In his letter to the Council, Murray's concerned seemed to have more to do with logistics than legality. “I remain concerned that this ordinance…includes several flaws,” he wrote. “Most notably, City costs of administering the collective bargaining process remain unknown and the Council has placed the burden of significant rulemaking on City staff.”

He ended his letter with, “I request you further amend the bill to address these concerns,” foreshadowing his decision not to sign the bill. Murray said in his statement Monday evening that he hopes to work with the council to smooth out his concerns.

Although this bill is specific to TNC drivers in the Seattle city limits, the hope for advocates is that it builds momentum beyond Seattle and even beyond the ride-hailing business. Executive Director of Puget Sound Sage Rebecca Soldana hopes that “this actually becomes a stepping stone and really sets a precedent for what you see happening across the country.”

It seems unlikely that a judge would be so concerned with the bill that he or she would put a stay on it immediately. In that case, its fate will likely be stretched for many months as each piece is rolled out, challenged, then decided in court.

So while the optimism in Council Chambers on Monday overflowed onto the street, and even though the councilmembers made eloquent speeches about Seattle’s commitment to workers’ rights, the celebration is on hold for now, if it comes at all.