What voters can do about PACs 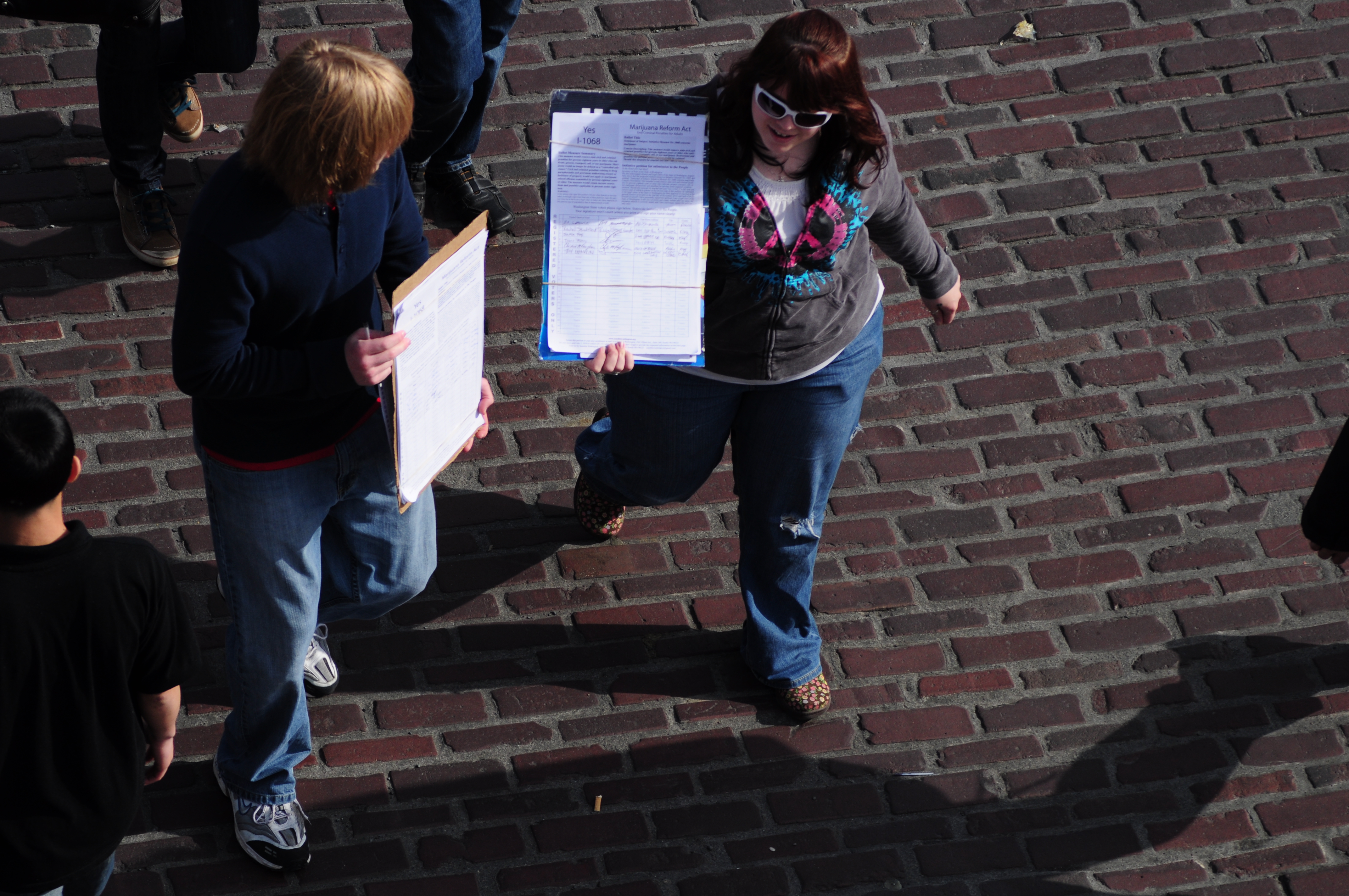 Signature gatherers for an initiative at work in Seattle's Westlake Park.

Since 2010 expenditures on political campaigns by independent political action committees have exploded at every level of American democracy, including the local level. This is the direct result of the 2010 Supreme Court Decision in Citizens United v. Federal Election Commission, which held that contributions to and expenditures by independent PACs cannot be limited.  Supreme Court Justice Breyer did not exaggerate when he wrote for the four judge minority that “Citizens United v. FEC, … eviscerates our Nation’s campaign finance laws, leaving a remnant incapable of dealing with the grave problems of democratic legitimacy that those laws were intended to resolve….Where enough money calls the tune, the general public will not be heard.”

In the 2016 presidential campaign, 158 families have contributed $186 million — almost half of all the money contributed to all the candidates, according to a New York Times report in October. In Washington State in the single special election contest this year for House of Representatives District 30 in south King County, independent PACs spent $1,230,000! Total spending in the campaign was $90 per voter. At stake in such swing districts is control of the closely divided State House and Senate.

In Seattle in the 2015 City Council elections, $790,210 was spent by independent PACs. This compares to not a single dollar just four years ago. The limit for direct contributions to candidates in Seattle was $700 in 2015. The individuals and other entities that supported independent committees contributed $70,097 directly to candidates under that rule, but the $790,210 they were able to contribute through independent committees increased their overall impact 11fold.  Most of the independent PAC money — $451,000 — supported just two candidates, Tim Burgess, now representing the city at-large, and Shannon Braddock who lost a bid to represent West Seattle.

In response to the increasing influence of PACs in all U.S. elections, Washingtonians are trying to get a new measure, Initiative 735, onto next November’s ballot. This measure will urge Washington State’s congressional delegation to propose a federal constitutional amendment to overturn Citizens United. But, the measure still needs 25,000 more signatures. Signature gathering ends this month.

The sources of PAC funds depend on the issues that matter most to the interests involved.  According to The New York Times, of the 158 families trying to influence the 2016 presidential election, the largest numbers are from financial services (64 families), energy/oil & gas (17), real estate (15), and health care (12).  Financial services, energy and health care top the federal regulatory agenda.  In Washigton's 3oth Legislative District over 50 percent of the money being spent to support the Republican candidate came from business interests, with real estate topping the list, and over 50 percent  of the dollars supporting the Democratic candidate came from labor unions.

In Seattle council elections, by far the largest expenditure — $339,000 — came from one PAC, CASE or the Civic Alliance for a Sound Economy, which is sponsored by the Chamber of Commerce. The hospitality PAC spent $100,000. Independent labor union PACs, mostly representing city employees, contributed $83,000 to independent committees and contributed an additional $51,000 directly to candidates. Of the eight contributors who gave $10,000 or more to independent PACs in the 2015 elections, six were commercial development interests: R.C. Hedreen & Co. ($60,000); Vulcan Corp. ($40,500); Patrick Callahan, Urban Renaissance Group ($11,000); Sabey Corp ($10,400); Wright Runstad & Co. ($10,000); and Matt Griffin, Pine Street Group ($10,000). In addition, Amazon, with its enormous real estate interests in South Lake Union, contributed $25,500 to independent PACs. Unlike banking, health care or energy industries, and taxation issues, the power to regulate land use and development lies mainly in the hands of local governments, and it is the local power that has the greatest impact on private economic interests.

Developers know that maintaining the current system, particularly as Citizens United has drastically reshaped it, is very much in their interest. Note that in this November’s election, while 63 percent of Seattle voters were deciding to establish public finding for future Seattle campaigns, four of the developers cited above, Vulcan Corp., Hedreen & Co., Sabey Corp. and Wright Runstad & Co., contributed to the campaign against public funding.

The Supreme Court majority based their Citizens United decision primarily on the First Amendment right to free speech. But the dollars spent by independent PACs go mostly to negative attack ads directed at the favored candidate’s opponent. Over 80 percent of the TV ads paid for by all independent groups in the 2014 federal elections were negative attack ads. Over 60 percent of the $1,204,737 that independent PACs spent in the 30th District race in 2015 were for negative ads. Is that really what the founders had in mind? While emphasizing free speech, the Citizens United majority found “no appearance of corruption” in the idea of unlimited contributions by billionaires, corporations and other special interests, and they found nothing in the constitution that calls for “a level playing field.”  Polls show that a supermajority of American citizens — Republicans as well as Democrats — disagree with the Court on both these points.

Independent committees can be quite creative in what they choose to call themselves, making it difficult for voters to know where the money is coming from. In the 30th District race this year, the largest PAC supporting the Democratic candidate was New Directions and the largest for the Republican candidate was Community Progress. Only by going deeper into the Public Disclosure Commission reports does one learn that the largest contributor to New Directions was The Harry Truman PAC, and the only contributor to Community Progress was The Reagan Fund. PACs contribute to PACs, which contribute to PACs, which contribute to PACs…

In the 2015 Seattle council race in West Seattle, donors to the Neighbors for Shannon committee consisted of the Chamber of Commerce PAC, the Commercial Real Estate Development Association PAC, the hospitality PAC and the Seattle Firefighters PAC. So PACs give to other PACs and call themselves “neighbors.”

At the federal level an even bigger disclosure problem is the enormous amount of “dark money,” which cannot be traced to its sources. In addition to overturning Citizens United, the constitutional amendment supported by Initiative 735 would require full disclosure of all sources of all contributions — no dark money.

What Can Be Done

In the 2016 election, when we are electing a new president, every voter in the State of Washington can have the chance to say to our Congressional representatives, “Enough! Enough billionaire, corporate and other special interest money dominating our elections. We want a constitutional amendment to overturn the Supreme Court’s Citizen United decision.” That will happen only if Initiative 735, which calls for such an amendment, gets on the state ballot. If it is on the ballot, it will pass. Similar initiatives were approved in Montana and Colorado with over 70 percent of the votes — supermajorities of Democrats and Republicans.

But Initiative 735 needs your help right now if it is going to collect the needed signatures by the December 31 deadline.  To date 260,000 have been collected, but 25,000 more are needed. It could go either way. The wamend.org website can tell you how to get petitions, link up with partners, identify good locations and help with do-it-at-home phone banks. And it will also tell you the places and events where you can find someone with a petition to sign. Right now citizens are in the streets and visiting Star Wars ticket lines to gather signatures. Your signature matters.

At Gettysburg Abraham Lincoln said, “We here highly resolve … that government of the people, by the people, for the people, shall not perish from the earth.” America’s legacy of government of, by and for the people is clearly at risk.  Never in the history of our country has big money had such power in our elections. Your help for Initiative 735 will make a difference and can preserve our country’s legacy.

Jim Street was a Seattle City Council member from 1983 to 1995 and later a Superior Court judge. The first bill that he sponsored as a council member was for public funding of city campaigns.