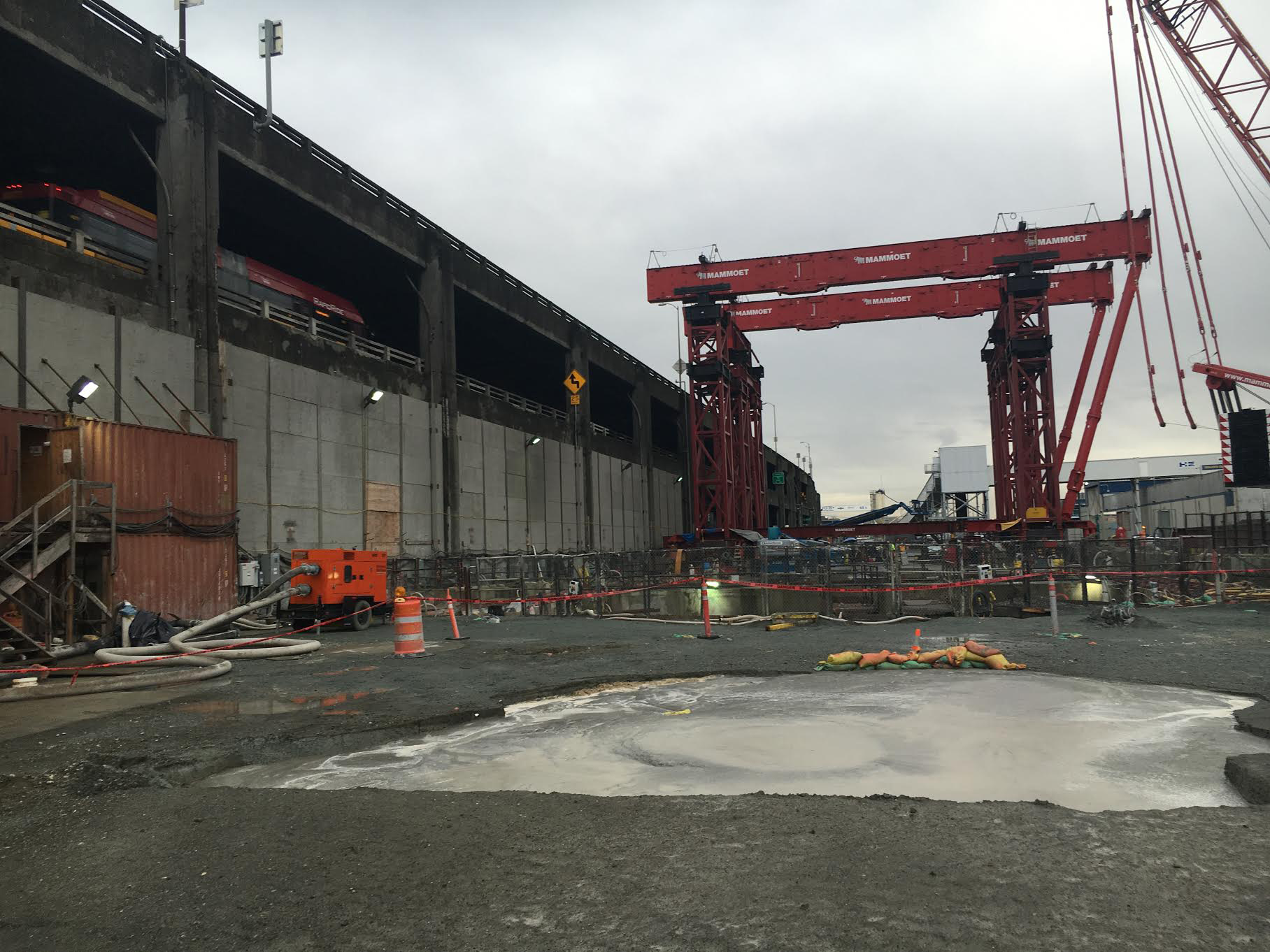 A sinkhole, now filled with concrete and sand, opened up on the tunnel worksite downtown.

In light of recent incidents on the SR 99 Tunnel Project, WSDOT is notifying the contractor that they must suspend tunneling work for cause. I share the Governor’s concern for public safety and we want to ensure that the contractor has the right protocols in place to proceed with their work safely.

We are asking that the contractor complete root cause analysis and take the appropriate steps to ensure that incidents, such as the sinkhole near the repair pit, do not occur again. STP will not be allowed to resume tunneling until their analysis and work plans meet the satisfaction of our experts.

Crosscut will update as more details are made available.

Jan. 13, 6 p.m.: A 35-foot wide and 15-foot deep sinkhole opened up on Seattle’s waterfront Tuesday night, about 100 feet south of the beleaguered and newly repaired tunnel-boring machine Bertha. The gaping hole, which could be seen from the surface, is about 20 feet from the viaduct. Head of contracting group Seattle Tunnel Partners Chris Dixon says it’s not a big deal, and the result of a crew too preoccupied with the progress of the machine to keep its eye on the soil behind it.

When the machine ducks under the viaduct in the future, he promised something like this would not occur.

After just over a week and 190 feet of tunneling, Bertha had to put on the brakes Monday, but for a problem totally unrelated to the newly formed sinkhole: the barge on which excavated material was being loaded started to tip. To avoid damage to the conveyor system, crews unmoored the barge, damaging Pier 48 adjacent to where it was parked. Crews now have to do something of a jigsaw puzzle effort to offload dirt from the damaged barge before they can begin tunneling again. Dixon said it would be a matter of days.

Considering the dramatic news of a sinkhole, the barge felt like an afterthought Wednesday as Dixon addressed the media. Indeed, hearing that a sinkhole has opened in downtown Seattle as a result of tunneling could very well be what normal Seattle citizens imagine in their worst nightmares.

There’s a special frustration that’s borne out of the gap in knowledge between engineers and everyone else, especially regarding mishaps in the course of $3 billion projects. This was seen in members of the Seattle City Council who, after WSDOT reported settlement in the viaduct, couldn’t quite believe the highway was as safe as engineers said it was. And we’ll almost certainly see it with this news of a sinkhole. For as much as Dixon promised that this was “not unique,” his assurances rely on trust. After two years of delay, there’s not a lot of that to go around in Seattle.

After the sinkhole was discovered Tuesday night, crews immediately filled it with about 250 cubic yards, or more than 50,000 gallons, of a mixture of sand and concrete. The soils of downtown Seattle – a soggy mix of fill and garbage from the city's early days – are notoriously difficult to manage. Knowing this in advance, STP built underground concrete walls to contain the soil in the event this very thing happened. Dixon called it a “tunnel in a box.” Apparently, the box did its job and Dixon said the sinkhole wouldn’t cause further delay or endanger the viaduct in any way.

The logical follow up question, though, was what happens when Bertha has to take a right turn under the elevated Highway 99? Could the public be confident it won’t happen again?

“With the program we’re putting in place, yes,” said Dixon, “because we’ll be able to detect if anything could lead to something like this and we’ll be in a position to take immediate corrective action.”

So why wasn’t that program in place already? Leading up Bertha’s stall, Dixon said that crews were using sensors to keep a close eye out for any voids in the soil that could lead to settlement. But since Bertha busted through her repair pit, “We placed a tremendous amount of focus on how the machine was functioning.” Soil monitoring, in other words, took a back seat.

When asked if this was an oversight, Dixon said, “Some might consider it.”

As Bertha moves forward, she leaves a trail of bentonite clay behind her which serves to stabilize the soil. If crews are actively monitoring the state of the soil around them – as was done before and promised to be done again in the future – they should be able to quickly catch sinkhole traps. When they do, grout will be immediately injected into them, theoretically eliminating the risk.

As has been said before, Dixon also said soils will improve as the machine goes deeper, making management easier.

The plan for Bertha in the coming weeks is it will move forward another 250 feet before reaching “Safe Haven 3” near Yesler. There, crews will do a top-to-bottom inspection of the machine before it heads toward downtown and, by January 2017, South Lake Union. The highway is slated to open April 2018.

If it’s any comfort, Dixon is a man with many years of tunnel experience, and said he’s seen quite a few sinkholes in his days. He didn’t appear particularly worried when announcing this one. But, again, there’s a certain amount of trust required that this will work out. The word "sinkhole" – innocuous or not – doesn't exactly inspire confidence.