Inside the conservative plan to take over city politics 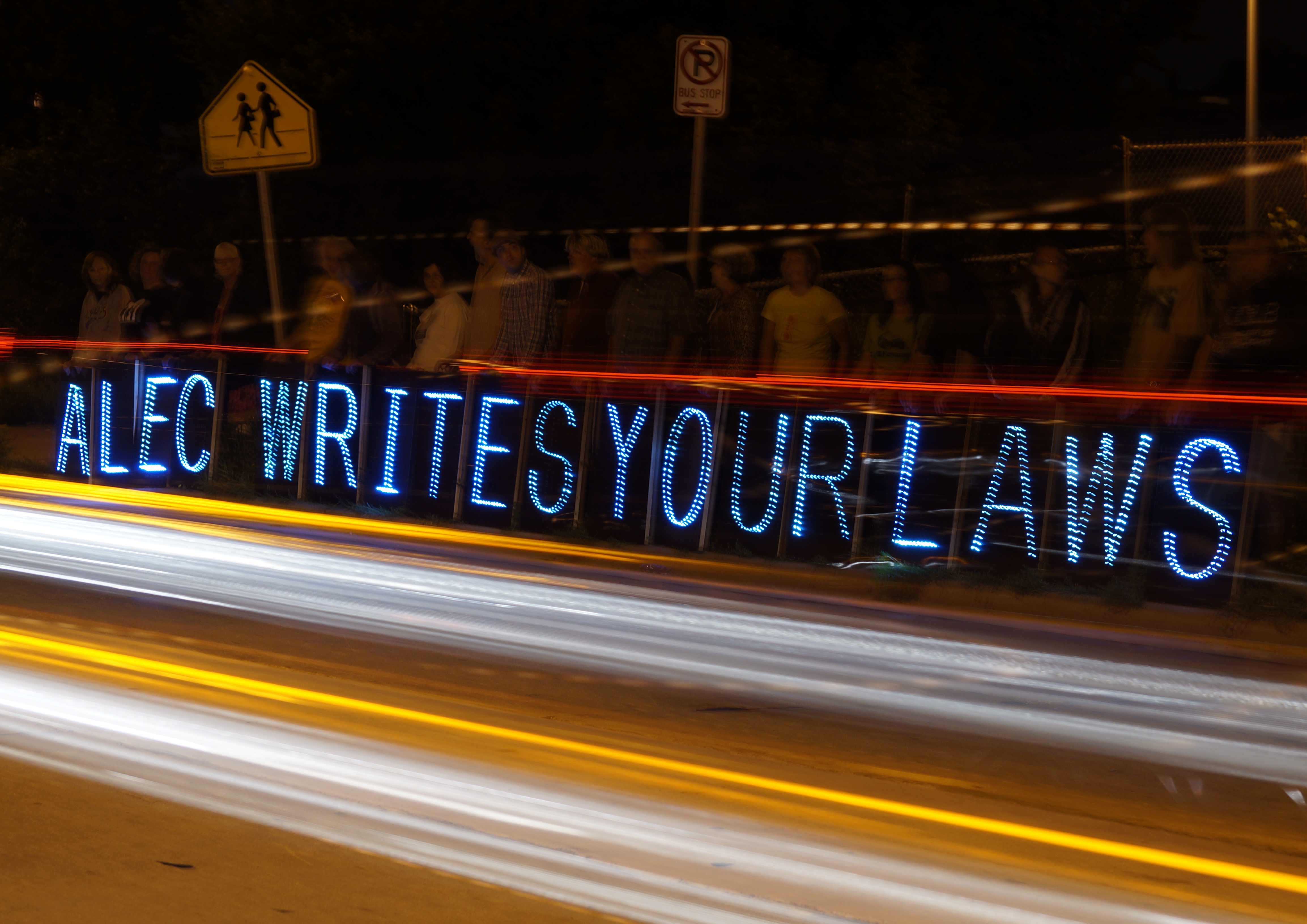 Liberals complain that ALEC (the American Legislative Exchange Council) has too much influence in writing laws.

The conservative American Legislative Exchange Council is the most successful political force, left or right, producing state legislation in the country. A bar chart produced by Quorum, a third party data research firm, proudly displayed at ALEC’s annual Policy Conference early last month in Scottsdale, coldly revealed their power. Under their motto of “limited government, free markets and federalism,” ALEC members introduced and enacted more than half of all state legislation around the nation. But what most caught my attention was the 2-to-1 ratio that ALEC's mostly Republican members held over Democrats in legislative successes.

Two years ago, ALEC started a municipal division called the American City and County Exchange to duplicate this conservative juggernaut’s success at the municipal level. They now claim to have over 300 members, although only a couple dozen showed up for last month’s meeting. Some of the members are business representatives, referred to as “private sector partners.” Business members have voting rights and hold one of ACCE’s co-chair positions, and no policy positions are taken without both groups approving, along with ALEC’s board.

This was the second ACCE meeting that I — a Seattle City Council member until last week — have attended. They certainly knew my progressive politics from my extensive blogging about the first visit that I posted on the Center for Media and Democracy’s PR Watch. I returned, in part, to see if, as their founder and director Jon Russell had told me, that some day his group will be bigger than ALEC.

When I asked Russell if he was disappointed with the turnout of only a couple dozen, he pointed out that most of their members pay their own way and, unlike ALEC, no scholarships are provided for ACCE attendees. Even so, he said, he is on track to double attendance every year.

Strangely, ALEC seems to have taken a lackadaisical attitude toward ACCE. Although the Legislative Exchange hired Russell to run the organization, Russell has no staff beyond an intern he’s been promised for next summer. Perhaps they were purposely playing poor for my benefit but ACCE's event was relegated to a single side room, with faulty audio-visual equipment and a slap-dash feel to their panels with no placards or even projected titles and names of their speakers.

Nevertheless, if ALEC’s billionaire right-wing/libertarian backers decide to spread the gospel of federalism to cities, ACCE could become a national player in foiling any number of progressive municipal measures. Or it could initiate its own regressive ones. It's a prospect that progressives, perhaps even in Seattle, should be wary of.

The federalist playbook —ALEC likes to emphasize the power of states and the limits, as it sees it, that should be placed on the federal government — was on display when two private sector partners spoke on an ACCE panel. Their pitch, warmly received by the audience, was that their members had to protect the free market from municipal governments arbitrarily passing environmental protection laws. They said local environmental measures should only be allowed where cities and counties had received authority to act on an issue, such as the use of plastic shopping bags, from their state government. It's an approach we've seen in the Northwest, where, for instance, the Washington Legislature considered (but didn't pass) measures that would have prohibited Seattle and other cities from implementing their bans on the giveaway of plastic shopping bags by most retailers.

Jacki Pick, executive vice president of the National Center for Policy Analysis, zeroed in on stopping cities from banning fracking. As the host of The Jacki Daily Show, she is a national figure promoting oil drilling, oil pipelines and fracking. She made no mention of the corporations benefiting from fracking. Instead, her point was how liberals were destroying job opportunities while they were increasing government payrolls. Her paranoia is in line with Republican Presidential Candidate Ted Cruz’s message that man-made climate change is a liberal plot to increase government power at the expense of working people.

A spokesman for the plastic industry on the panel attacked municipal plastic bag bans as harmful to local businesses. He said studies showed that communities lose up to 10 percent of their retail trade and the jobs that went with them. No data was shown to back up that claim.

At the heart of both panelists’ presentations was the loss of individual liberties through these intrusive government policies. This belief was echoed repeatedly throughout the conference as speaker after speaker reminded the audience of the Federalist Papers and how they formed the backbone of this nation’s constitution: a vastly overstated importance attributed to the writings of primarily two men, Alexander Hamilton and James Madison. It was never mentioned that these “papers” were never adopted by any national gathering of the founders.

Given the panelists' insistence on curbing local decision makers, I asked how ALEC/ACCE could promote federalism but not allow municipal governments to protect their residents. Trent England, of the Oklahoma Council for Public Affairs, said that liberals use a kind of jujitsu by arguing that conservatives were abandoning their belief in federalism in favor of individual business interests. England said local governments are creations of the state. And, under his view of constitutional federalism, it’s the states that are enshrined with real powers, as well as responsibilities for protection of liberties.

However when it came to workers rights, the attendees made a sharp exemption to states being the ultimate decider on individual rights. A model Local Right to Work Ordinance from ACCE was specifically pursued to allow counties in states with no such law to pass their own laws hindering the establishment of unions and preventing any requirement that workers join or pay dues for union representation.

Real social and economic problems expose how limited the federalist solutions would actually be in addressing urban issues. For instance, there was widespread recognition among even the most conservative attendees that this nation is in the grip of a drug and mental health crisis. I was surprised how many said that just jailing those taking drugs would not solve this tremendous problem. There were repeated calls for greater support for mental health facilities and drug treatment centers, including needle exchanges. Diversion from jail to treatment was a mantra. This approach is in total alignment with liberals wanting to halt the criminalization of many youth of color.

The second area was the strong cautionary note expressed by ACCE members during informal conversations about using TIF’s (tax incremental financing) to promote economic development. Under a TIF, a new business is attracted to a neighborhood that lacks jobs in exchange for receiving a tax benefit commensurate with the new taxes that they generate. ACCE members pointed out that TIF’s were shrinking their city’s tax base making it difficult to provide basic services to the new businesses and workers. One councilmember was aghast how the boundary of a TIF had been applied to an entire town in a desperate attempt to attract businesses. In the pursuit of cutting taxes they were financially strangling their own governments — the exact point made by progressives on the general use of business tax breaks, including the many enacted by Washington state.

Despite these few instances of alignment with the concerns of progressives in cities across the country, the greater push by the participants was to promote free market solutions by eliminating public regulations. That's something that the Koch brothers, and other billionaires like them, have embraced as a way to keep their profits growing ever higher. But I wasn’t surrounded by billionaires, or even millionaires.

These were middle class, mostly white people, who were on a mission to save this nation from their own government, regardless of what corporations were doing. I could not grasp how they could rationalize ignoring the effects of policies serving billionaires rather than their communities or how they could miss that their policies were weakening democracy not saving it. I asked Russell, the founder of ACCE,  “Doesn’t the concentration of wealth negatively effect the functioning of a free market economy? Shouldn’t a democracy protect its people from a distorted market place through government regulations?”

His answer was straightforward. “It’s not the government’s business. It shouldn’t be in the business of managing wealth.” Furthermore, he went on to say, it is a value judgment to say that concentrating wealth is a detriment to a free market.

And this logic leads back to their main tenet, which is the belief that federalism is the answer to what is wrong with this nation. As Russell explained it, the left doesn’t talk about federalism because progressives basically believe that government is good, and to accomplish greater good, government should grow. This is the antithesis of federalism, which, as he sees it, is based on individual responsibility.

“Government is not everything to all people,” he assured me with a smile. “If people don’t take care of themselves, well that’s a role for non-profits to address, not government.”

Much has been written how ALEC is a tool of a corporate strategy to protect their wealth and political influence. While that characterization can be documented, it overlooks the ideology that binds their membership together. And that belief system makes ALEC a formidable political force in this country; a belief that, at its most basic level, is a distrust of government and by extension distrust in democracy as a guarantor of individual liberties.

The right wing seeks to limit government because its followers fear government; it is the enemy. We need to address this dogma head on by reclaiming government as the voice of the people. If we do not, corporations will continue to blind voters to the corrupting power that companies exert over government, in part by funding ALEC — and now ACCE — to pursue their objectives at the municipal level. The only effective countervailing force will be electing leaders who will stand up to this

When I asked Oklahoma-based panelist England who he believes is the final arbitrator of which individual liberties should be protected, he had to admit, “The decider is ultimately the ballot box. The people decide through the democratic process.” Elections are critical because they decide who controls the most important institution in our democracy: the government.

We have seen how successful the billionaires and corporations can be in states. ACCE and its agenda must be confronted on the playing field of municipal elections. Otherwise, the right wing will ultimately head off the attempts in Seattle and other city governments to deal with the way those with money and power are controlling our democracy.

Nick Licata was a five-term Seattle City Council member and is author of “Becoming A Citizen Activist."