From the spotlights to feeding Seattle's hungry 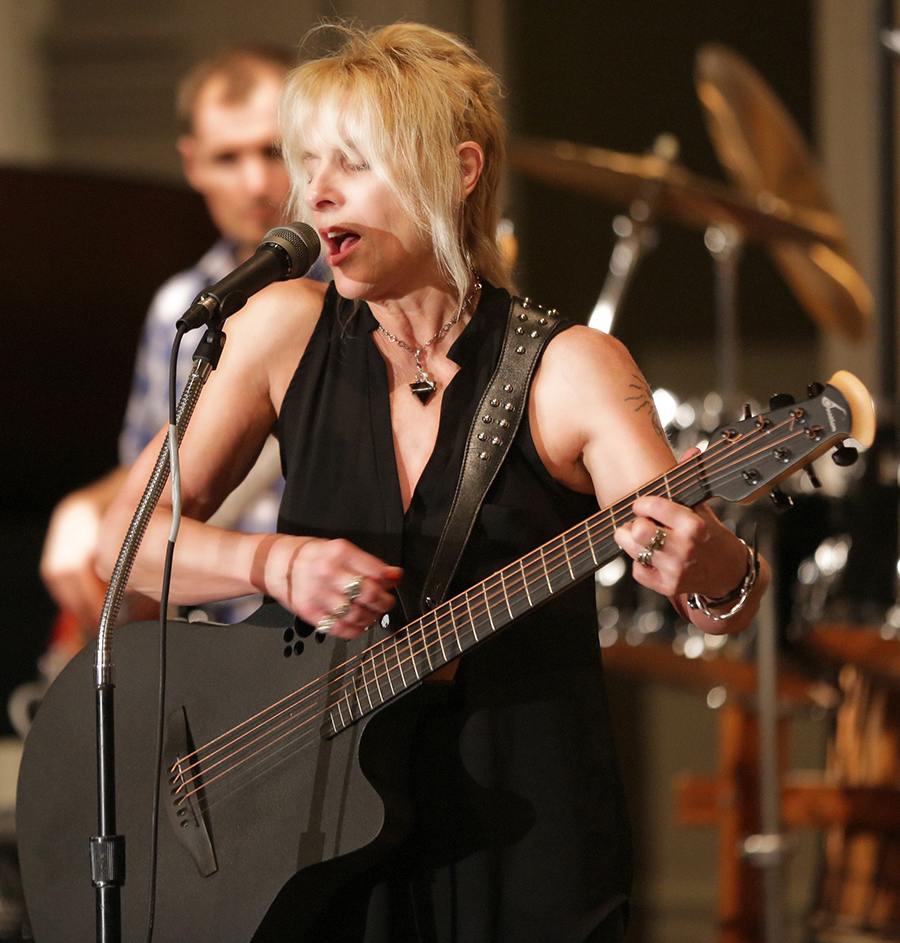 Beverly Graham performs at a benefit concert in 2014

At the end of a gig at the Top of the Hilton on the waterfront or the 5th Avenue Theatre, singer-songwriter Beverly Graham, would walk into the night and see people digging out of garbage cans, little children with no shoes on their feet and older people sitting on grates for warmth. She would ask herself, “Why is nobody taking care of them?” She'd always sung about social justice, but had never really done anything.

Then – this is back in 1989 – she had a life-and-death experience and was briefly paralyzed, blind and unable to speak. After she came through the ordeal, she packed up 30 organic lunches and took them downtown. She and a friend handed them out to people.

Graham thought it would make her feel better for the day. Instead, the experience was galvanizing and forced her to ask what it was like to be so desperate for food that you'd take it from somebody standing on the street. She couldn't answer the question from direct experience, but Graham, who has gone to record eight CDs, vowed to start feeding as many people as she could who were living without shelter, on benches, in doorways or in cars.

Today the program serves even more and consists primarily of hot meals. The need shows no sign of diminishing. Indeed, in a city that has declared a housing emergency, Graham and others wonder whether equal attention shouldn't be directed toward providing healthy food to those without — and with — homes. They suggest it should be provided at or near shelters, or if that's not possible, through a network of community kitchens.

At first, the preparation of all the lunches took place in Graham's kitchen. She recalls taking out a second mortgage to keep going.

Along with her vow to keep serving people, she had made another promise: The food would be nutritionally dense, safe and, as often as possible, organic and sourced locally.

While she struggled with financing her growing operation, city officials threw up barriers, questioning the safety and legality of her distribution of food in public places.

“I got fined," she says, referring to experiences with Seattle officials. "I got cited because I encouraged people to loiter, because I created a nuisance, because I created garbage.” But she stayed with it, educating herself on health department compliance and the importance of food safety. Graham knows food safety is critical for everyone, but it's particularly important for those living with the high stress of no permanent shelter, when each day is a battle for survival.

Fast forward to 1994 and the City of Seattle agrees to allow OSL to serve meals outside the old public health and safety building across from City Hall (a site that is currently vacant and under development). Graham attributes that forward-looking action to the fact that she had a microphone — she never stopped singing — and was giving names and faces to people living on the streets, to people who might work every single day but make minimum wage, and as a result, are always on the lookout for a decent meal. By then she'd secured kitchens in churches and other non-profits to work out of.

Eventually she formed a partnership with Compass Housing Alliance, whose kitchen she's been using for the last 10 years. In exchange she makes breakfast and lunch for Compass residents.

Over the next few years, Graham sets up more kitchens and employs 17 chefs and 7 staff members — many who'd been without shelter. The six kitchens turn out three hot meals a day for food insecure populations all over the city. Today, 38,000 hot meals are made a month, to be served at no cost, no questions asked. The meals go to, among others, artists, welders, college graduates and foster care children cut loose on their 18th birthday.

Some, says Graham, “are damaged physically, some emotionally, some mentally. Some aren't damaged at all, they simply lost their job, got too old to work, got kicked out and cut loose, got beat up by an abusive partner.” Some contribute to their own difficulties, she says, but many do not. The meals are served at shelters, outdoor meal sites, hygiene centers, a woman's resource center and organizations that provide services to the economically challenged.

A significant portion of the food, 750,000 pounds annually, is rescued by OSL before it hits the waste stream in an eco-friendly program called Food in Motion. (In the U.S. as a whole, it's estimated that 40 percent of all edible food is tossed. The environmental cost is staggering, according to the Natural Resources Defense Council, which points to the waste of energy, water and fuels in growing and marketing the foods as well as the release of methane, a particularly potent greenhouse gas, as most of the food decomposes in landfills.)

Food in Motion is economical as well, says Graham. She estimates the value of the food her organization rescues at more than $2 million annually. It includes high quality salmon, halibut, poultry, beef, veggies and fruit from 52 partners such as food distributors, grocers, restaurants, caterers and major corporations. Often perfectly safe food has been ordered in advance for parties where 200 were expected but only 100 show up. Or there's food that's past its sell date or is lightly bruised, but perfectly edible.

What OSL doesn't serve of the 38,000 meals it makes each month goes to other human service providers like the Union Gospel Mission, Bread of Life, the Millionair Club and the Pike Senior Center. The meals are always transferred with a “chain of temperature custody,” i.e. the food is kept warm and safe.

The goal now is to expand the Food in Motion fleet beyond the downtown core to needy populations in food deserts in White Center and Tukwila and in neighborhoods and small towns all over the state that don't have access to nutritious food. But they'll need to raise more money to do that.

One in seven Washingtonians, or 14.1 percent, lives below the poverty line, according to the Anti-Hunger and Nutrition Coalition. The state is one of only three in the nation in which the total number of people in poverty increased in 2014.

It's a few hours before lunch. I've been speaking with Graham in her pint size office in Pioneer Square. She has calls to return and a grant to finish. Before heading out to see one of her kitchens, she shows me an end-of-year fundraising letter: "The sky is dark with sheets of pounding rain. ... On the streets of Seattle people are walking through buffeting winds, coat collars pulled up. ... It's not easy to navigate this type of weather for anyone. But for those, who, for whatever reason, live without shelter, safety and warmth, it's frightening and life threatening." The letter closes with, "We are committed to Only Serving Love to those in need." Operation Sack Lunch has acquired a new phrase, one that seems to go with the territory.

On a day not unlike the one Graham described in her letter, the kitchen at Compass Housing Alliance is warm and cozy, a place you want to be. Seven chefs work side by side, preparing grilled cheese sandwiches and tomato soup, a fresh veggie salad and fresh fruit salad with Greek yogurt. Jokes fly as nimble fingers slice and dice. “We work together and take turns being boss,” is a refrain.

A chef named Nate reaches for tomatoes, scallions, radicchio and baby spring lettuce. He's a young man Graham had mentioned, one who'd been sleeping outside by a school in West Seattle. He'd walk into downtown everyday to use the hygiene center, wash his clothes, and look for work. “He found us,” she says. “OSL hired him and we changed his life.”

“Homelessness implies we don't have a home on the planet," Nate says. "It might not be the salient feature of this organization, but I think OSL treats people with the dignity that comes from a common ancestry and from living on the same planet.” It serves people who might not have a conventional shelter or might work two or three jobs. "But that doesn't mean they deserve food that's going to give them a stomach bomb. Instead they can eat very well because of organizations like this.”

Another chef, Nicole, mother of two, wishes she'd known about OSL's hot meal program back in the days when she couldn't always afford nutritious food.

Residents of the men's shelter at Compass Housing Alliance start to arrive for the midday meal. They may view it differently, depending on circumstance, but in key ways they're among the luckier ones when it comes to living without housing. Here, there's a marriage of shelter and food; and specifically a marriage with nutritionally dense food, as Graham always defines the kind she and her team serve.

At last count in January of this year, there were 10,047 people in King County without shelter for the night. There's a lot of movement and talk about homelessness, says Graham, “and there should be."

"But food is also a basic necessity," she says. "If somebody doesn't have shelter, they also don't have food.”

Graham and the Rev. Bill Kirlin-Hackett with the Interfaith Task Force on Homelessness have been meeting with Seattle Mayor Ed Murray and his staff, encouraging them to think about the two as a package. The city recently declared a State of Emergency on Homelessness, notes Kirlin-Hackett, but there's nothing in it about food. “It seems to have escaped people's attention about the need to pair food with shelter.” Instead, “we get shelter here and food over here, maybe.” They need to be coupled. Providers often assume that it's not in their capacity to link the two, he suggests. “But the result is that people on the streets are forced to live with lists in their head of where they can stay and where they can find food.”

Instead, says Graham, “let's start with a response to emergency housing and link it with creating an emergent, equitable food system.” It shouldn't be too tall an order in a city as resource-rich as Seattle. The ante would have to be raised on the food side, however. Currently, the city's Human Services Department gives $306,441 annually to OSL, and the department's Community Support and Assistance division awards 26 agencies a total of $3.1 million to provide food and meals to low income food insecure families and individuals. In contrast the city has allocated $5 million  for the State of Emergency on Homelessness. This year the city invested $40 million in a range of homeless related programs from rental assistance to transitional housing and emergency housing; to permanent housing.

If you're going to tackle homelessness, you need to tackle nutrition, says Graham. Nutritional excellence, she says, like housing is a right we're born to, not a privilege we earn.

This story has been updated to correct an incorrect reference to one of the chefs, Nicole, as having been homeless.