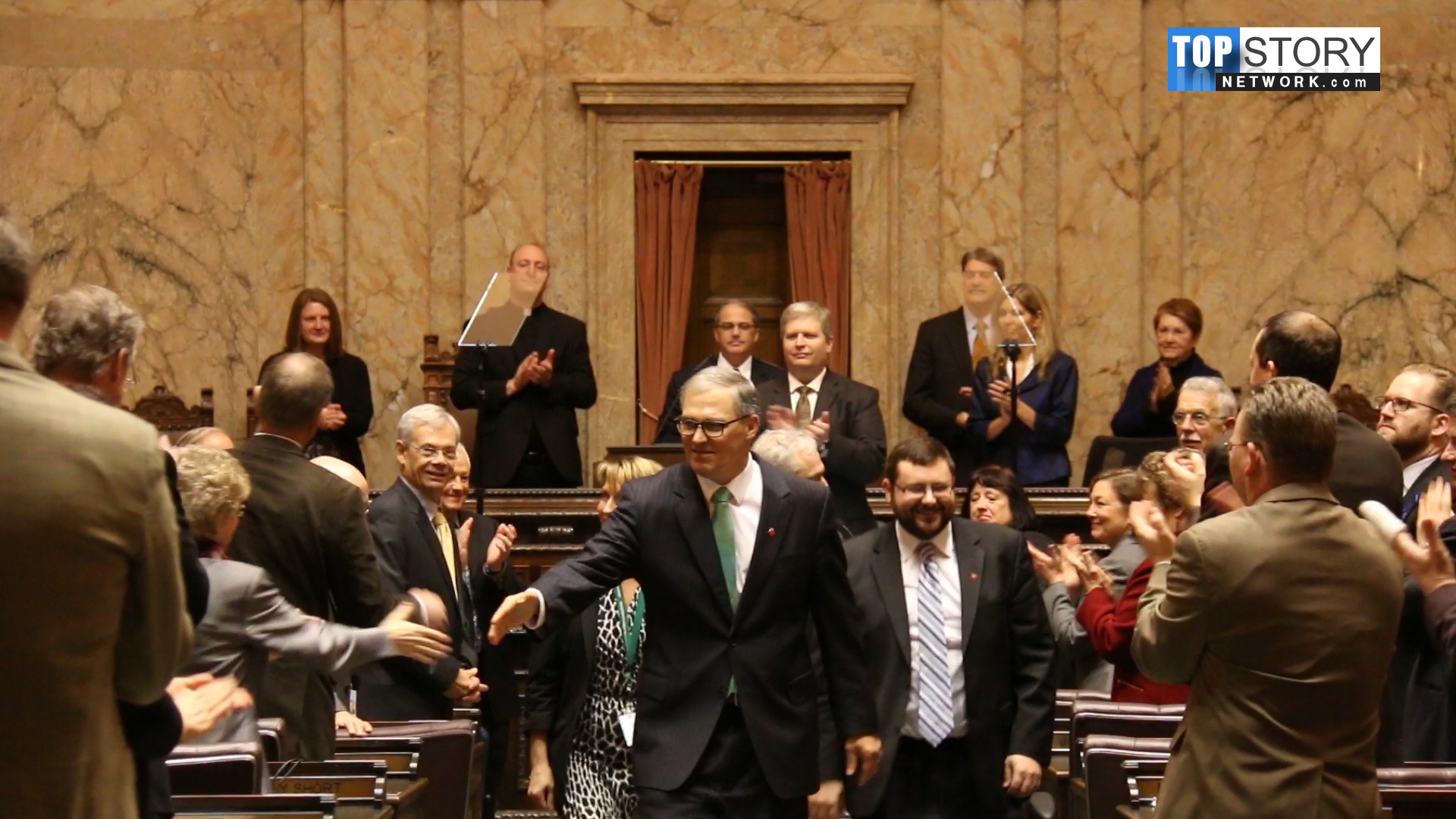 Gov. Jay Inslee leaves after giving his State of the State speech in 2016.

Having danced – and squabbled -- together for six months before reaching a budget deal, Gov. Jay Inslee and lawmakers from both parties have been talking up their work as fine examples of bipartisanship. Of course, as House Republican leader Dan Kristiansen was saying the other day, they will have disagreements.

That's what politicians do. And, with the new session under way, they are ready to get back to squabbling over the control of carbon emissions, the mistaken early releases of prisoners, and raising the minimum wage. They are also positioning themselves for at least a bit of jousting on education and mental health, two areas where they have been congratulating themselves for working together.

In his State of the State speech yesterday, Inslee generally — though not entirely — avoided the kind of implicitly, pointed partisan language that President Barack Obama used in his State of the Union speech later in the day. That was a notable departure for the Democratic governor who had once, as a member of Congress, always seemed ready with a well-placed shot at Republicans.

But Inslee pushed for additional pay for all teachers as part of his proposals to address an emerging teacher shortage, as well as a $4,000 a year raise for new teachers and more money to provide mentors. Young teachers, he said, are more likely to stay in the profession if they have the guidance of a  mentor. To pay for it, though, the governor proposed eliminating several tax breaks.

Republicans in the Legislature stopped short of ruling out raising more money that way, but they were quick to express deep reservations. "It is totally predictable that every budget, the governor starts with taxes," said Senate Majority Leader Mark Schoesler. "For the governor, it is a first resort. For us, it is the last resort. And we mean it."

Republicans also warned against the governor's plans to take executive action to limit carbon emissions by the largest emitters of greenhouse gases, saying that such limits could risk the improving job picture he bragged about. Sen. Jan Angel said the regulations could be "a gut punch" to small communities where employers in food processing and other industries would be under pressure to reduce emissions. She said the state is already making progress on greenhouse gases through innovation and technological advances.

Inslee told lawmakers that the draft rules from the state Department of Ecology have drawn significant interest, including from businesses. "People are robustly participating in the process," he said. "They’re looking for solutions."

As he has recently, Inslee tackled the state Department of Corrections' mistaken early releases of prisoners directly and forcefully, promising "absolute accountability." He, in effect, called on public employees to become whistleblowers if they know of a long-simmering problem such as the 13-year series of software issues that led to the early releases. Addressing state workers directly, he said, "You are often the first ones to see when something is not working right. That’s why you should feel empowered to bring these things to management’s attention and know that you will be heard."

Kristiansen questioned whether Inslee was putting too much on rank-and-file employees when there was so long for the issue to have reached some higher-ups. He and other Republicans have also questioned why answers from an investigation by two attorneys, former federal prosecutors, won't be ready during the legislative session.

A newly unveiled initiative to raise the statewide minimum wage to $13.50 per hour (from the current $9.47) set the stage for some of the sharpest disagreements, and for Inslee to engage in at least a bit of progressive crusading. He said he supports the measure: "I stand on this rock-solid belief: If you work 40 hours a week, you deserve a wage that puts a roof over your head and food on the table. Period. And you shouldn’t have to give up a day’s pay if you or your kids get sick."

Republicans said the minimum wage isn't even a point of discussion in smaller communities. Schoesler said that it would damage farm products' competitiveness with crops from California and other states; he pointed specifically to sweet cherries and asparagus. Kristiansen questioned how the governor could be so explicit in his support of the initiative when legislators are generally warned against using state facilities to oppose or support a ballot measure.

Inslee, having warmed to the subject of workers' needs, also suggested that state investments of pension money should be used to fight the high levels of compensation for CEOs, who sometimes get paid 200 times as much as their employees. He suggested that the State Investment Board could become a national leader by adopting policies to invest in companies with smaller ratios of CEO pay. Kristiansen brought that up with reporters, saying, "I have not seen a governor politicize the State Investment Board before."

While the governor and the Republican leadership traded shots respectfully, there was a rather puzzling political protest reported by The News Tribune. State Superintendent of Public Instruction Randy Dorn, who is not seeking re-election, came in before the speech with several other statewide elected officials, but then quietly left before Inslee took the podium in the House chambers. He left a note on his seat that reportedly said, "Reserved for kids and students." He told the paper that the governor and Legislature aren't making enough progress on education.