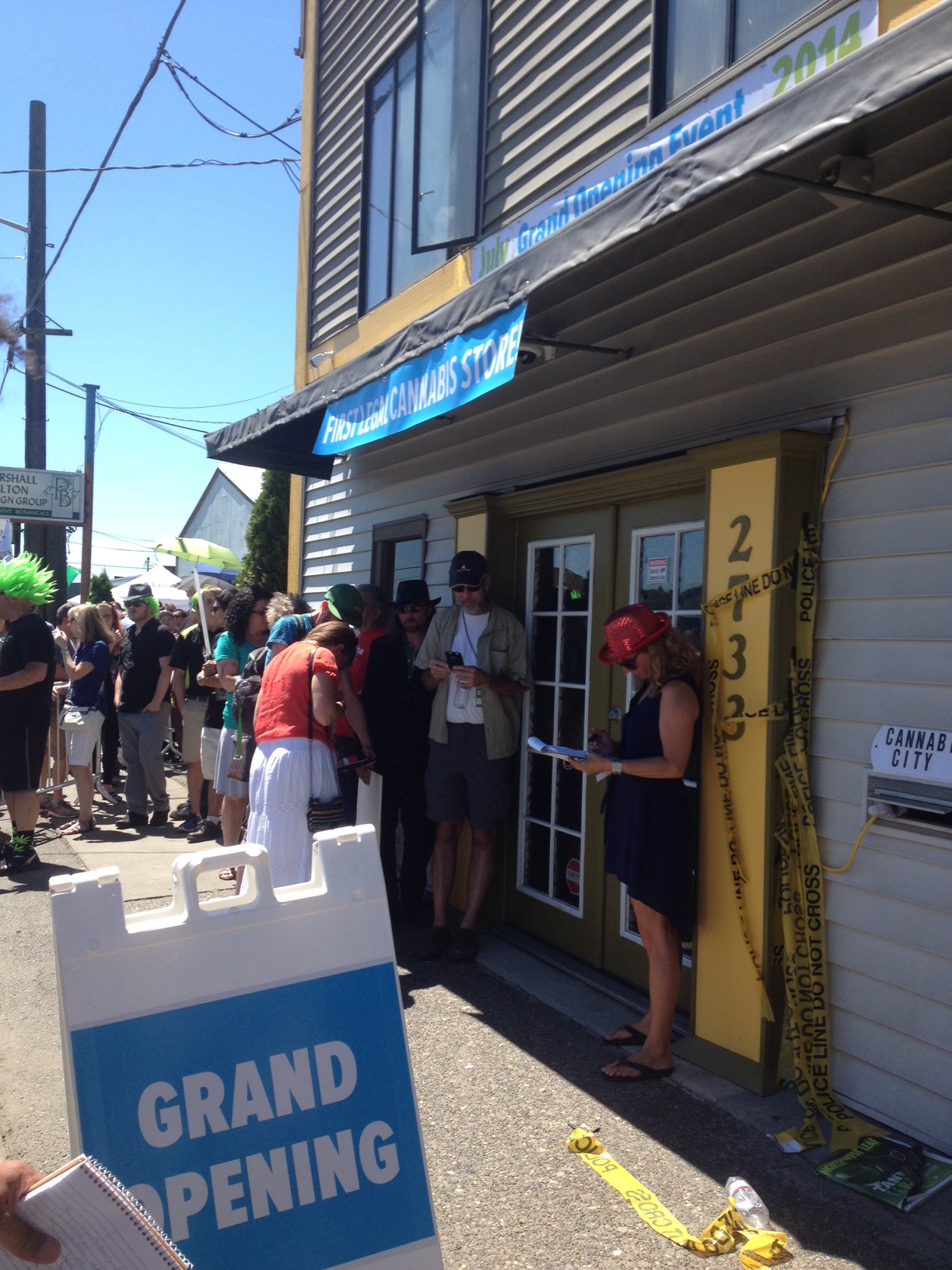 Reporters and pot-enthusiasts created a circus in front of Cannabis City, Seatle's first recreational pot store, on the day it opened. Pot clubs could be coming soon.

Before heading home for the weekend Friday, state lawmakers had time to squeeze in a public hearing for one more bill — and it had a curious aroma.

It wasn't entirely that earthy, punky smell associated with pot shops and certain corners downtown. This proposal also included notes of cherry, vanilla, even hints of watermelon, more reminiscent of long tubes leading from gently bubbling cauldrons to deep, plush couches. Altogether, it amounted to the smell of irony.

The irony comes from a prime source of the bill – the city of Seattle. The measure was specifically requested by the Seattle City Attorney's Office, the same office that was ready last summer to support Mayor Ed Murray's push to shut down the 11 local hookah bars. (The mayor eventually backed down on the plan, but not before owners and patrons of the city's hookah bars — many of which are deeply connected to the East African community — took deep offense.)

City officials at the time largely lined up behind the mayor's narrative that the hookah bars not only posed health risks to workers and operated in contravention of the Washington State Indoor Clean Air Act, but also were dens of dubious, even nefarious or criminal behavior.

Marijuana clubs, presumably, would not attract such a noxious element — although testimony at the hearing stopped shy of shedding any light on exactly why no one is worried.

In fact, the type of establishment proposed would be materially different from a hookah club but mainly in a way that amounts to a smaller irony of its own: Smoking would not be allowed in pot clubs, in accordance with the Indoor Clean Air Act. Instead, only vaping and the consumption of edibles would take place.

John Schochet of the Seattle City Attorney's Office said the bill would address a real issue: Some people have no safe, comfortable place to use the state's newest legal recreational substance. So, some Washington residents use the drug in public, itself a misdemeanor. Others, including marijuana tourists and other visitors, may end up breaking hotel or apartment rules by smoking in their rooms.

Committee members initially greeted the bill with some skepticism. Seattle Democratic Sen. Bob Hasegawa, after first bringing up the contrast with the city's hookah bar stance, expressed hope that the siting of marijuana clubs would not blight low-income or historically minority-dominated neighborhoods the way some claim marijuana shops have. Sen. Steve Conway, D-Tacoma, expressed minor indignation that marijuana clubs were being considered while cigar bars remain illegal, although his concerns appeared to be resolved by the prohibition of actual smoking.

A representative from the Washington State Liquor and Cannabis Board expressed reservations about the potential for a club to hold both liquor and marijuana licenses. Supporters of the bill, including its prime sponsor, Republican Sen. Ann Rivers of La Center, quickly clarified that they would be fine with an amendment prohibiting the mixing of pot edibles and alcoholic beverages.

Rivers, the bill's prime sponsor, explained that the bill came about in the wake of an outright ban on marijuana clubs last year. That was part of the larger move to combine the state's medical and recreational marijuana markets to crack down on commercial activity in a gray area between the two.

"This was one area where we may have gone a bit too far," said Rivers. "We want to give back some measure of local control."

That makes the bill an example of conscious, incremental reform, pushed forward by representatives of a liberal city and a legislator from a conservative district working together to create freedoms and business opportunities for law-abiding Washingtonians. Especially in a legislature known — fairly or unfairly — in recent years for gridlock over education and the budget, it's hard to laugh at that.