A venture capitalist and a socialist are exporting Seattle's progressivism 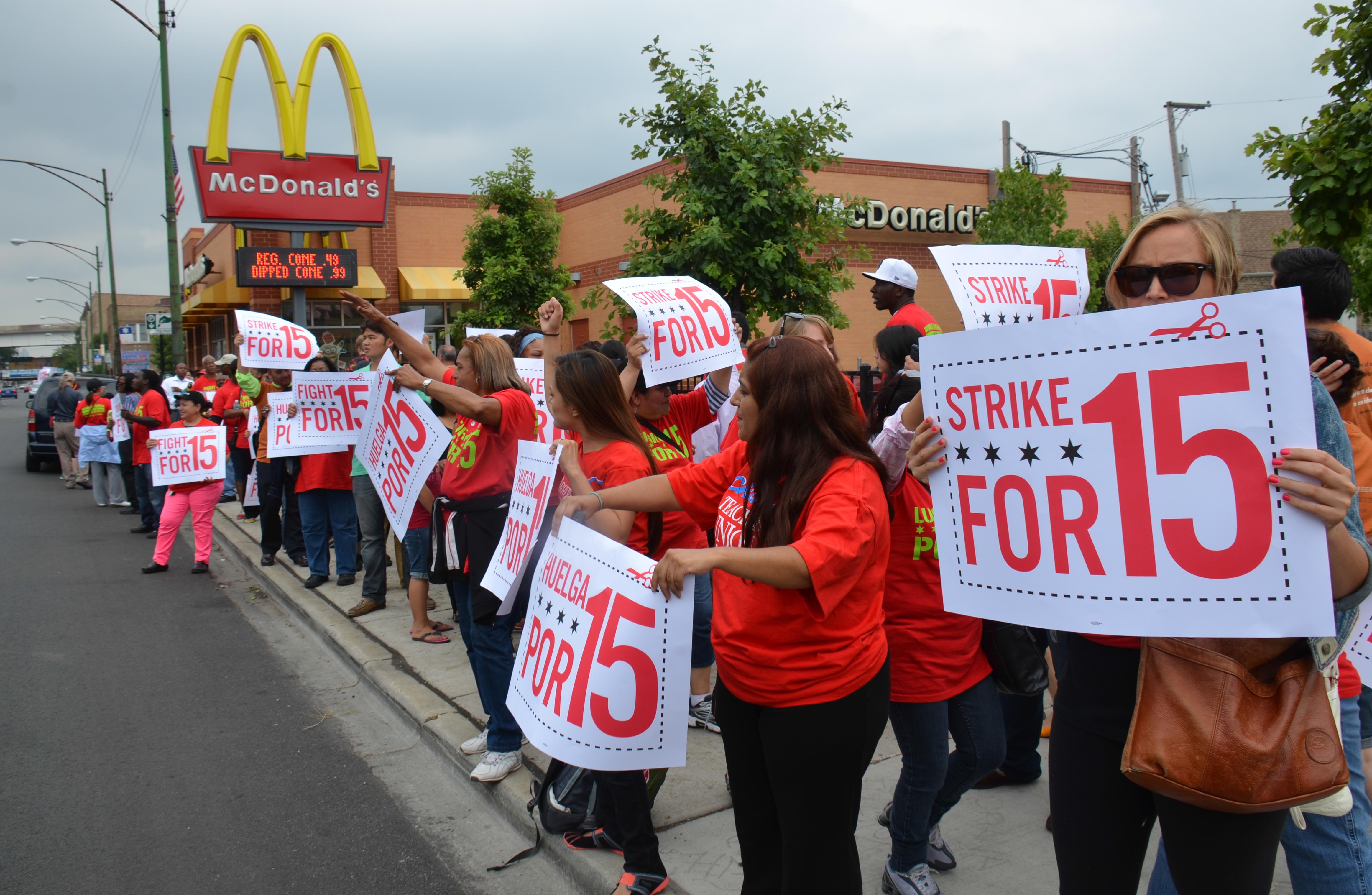 A minimum wage protest in Chicago.

Seattle has long exported jets, software, music and Kindles. Now the city is in a new phase of exporting: pushing its progressive politics.

We’ve aspired to be a national role model of liberalism — from Greg Nickels’ influential embrace of the Kyoto climate accords to Ed Murray’s claim that his election in 2013 “was energized by the belief that Seattle can show the nation that government can work once again.” We’ve also been known as a crockpot for lefty radicalism (think the General Strike of 1919, or the WTO demos of 1999). In recent years, our politicians have yearned for recognition, but more importantly to make Seattle a role model of modern progressivism.

Fueled by the tech economy with its money, innovation and commitment to disruption, Seattle is a Ground Zero for political experimentation and scaling-up our initiatives to the national level. In an era of urban growth, Seattle is a city open to experiment — a flat political hierarchy, a tradition of grassroots activism, willingness to break with conventions.

As a result, local, high-profile evangelists are going forth and preaching the reshaping of civic life to the rest of America, city by city, state by state. Examples include Seattle venture capitalist Nick Hanauer, who helped make $15 an hour a reality and got Washington’s background check gun law passed in 2014. He is now using his millions to push for similar laws in other states, and promoting a broader agenda to address income inequality. Another is Kshama Sawant, newly re-elected to the city council, who has become the standard bearer for the Socialist Alternative movement and is using her growing profile beyond Seattle to help elect socialists elsewhere, expand worker wages and rights, and even influence the 2016 presidential election.

Hanauer and Sawant are interesting studies with their conscious embrace of national influence, their sometimes complementary politics, their tech backgrounds (Hanauer an early investor in Amazon, Sawant a former programmer), and their radically different points of view on the end game. Together they reflect the spectrum of Seattle’s lefty politics, part of which embraces reform-minded corporate capitalism and the other that sees capitalism as the ultimate barrier to social justice.

Seattle has become a two-party city of Democrats and unaffiliated socialists. Hanauer wants a smarter, more compassionate capitalism — he wants to save the plutocrats from themselves and restore a vital middle class. Sawant wants to eliminate capitalism and the “Billionaire Class” that she, Bernie Sanders and others rail against. Together, the two activists are engaging in efforts to reinvigorate the left nationally while promoting incremental progress locally. They are speaking broadly, but organizing from the bottom up.

President Barack Obama’s State of the Union speech on Jan. 12 offered an interesting contrast of their respective influence and different approaches.

Sawant was tapped to give her party’s official response to the speech, placing her as their national spokesperson. In the response, she said that she agreed with Obama’s optimistic view of America’s future, but offered a savage critique of his administration’s relations with Wall Street “gangsters” and his administration’s “legacy” of increased income inequality, and she attacked Hillary Clinton as a “warmonger and Walmart” candidate. Like many Seattleites, she prefers Bernie Sanders.

Sanders' nomination, she says, “would be a major blow to the political establishment and to corporate politics.” Sawant would like to build a national movement around the Sanders campaign — one that could help re-brand socialism in a post Cold War light. If Sanders doesn’t win the Democratic nomination, his loss could present an opportunity for the Socialist Alternative movement and Sawant to carve off a chunk of the Democratic left — a “massive new grassroots force capable of waging a fierce battle against the Democratic Party machine at every level of American politics.” That force could challenge the Democratic nominee, but more importantly be steered into local campaigns to elect more socialists to city councils and the like. It’s part of a much longer game.

Hanauer is less revolutionary, though he’s got a large, ambitious agenda. He and his political advisors listened to Obama’s SOTU speech for signs that policies that they support and are thinking about making headway at the top — policies they have discussed with folks in the White House, the Labor department, and elsewhere inside the Beltway.

Last summer, Hanauer and David Rolf, a Seattle union leader of the Service Employees International Union, wrote a position paper about their concept to attack income inequality with a new idea: a Shared Security System designed to provide benefits — retirement, health, vacation, family leave — for all workers including part-time and contract workers no matter for whom they worked. These benefits would follow workers wherever they go. Thus, a millennial worker in the new economy, for example, who was part-time at Starbucks, drove for Uber, and rented their room out occasionally via Airbnb would still be able — through their Shared Security Account — to get paid vacation or look forward to a pension. Workers in the growing gig economy would gain security. Hanuer says their concept was “staggeringly well-received” in progressive policy circles.

Obama said in the SOTU, “Basic benefits should be just as mobile as everything else today. … Even if he’s going from job to job, a [worker] should still be able to take his savings with him. That’s the way we make the new economy work better for everyone.” So, Hanauer could be heartened that the president is on the same page with reinventing the social contract between individuals and employers, which Hanauer sees as essential with the profound economic changes brought about by technology. Hanauer is working within the system, and has lobbied hard and successfully for the Obama administration to change the pay threshold of workers eligible for overtime pay, a potentially huge boost to the middle class. Still, he’s also working outside the system by finding means of making change without having to rely on trying to get a gridlocked Congress to act. At the state and local levels, initiatives are one way to do that.

One area where Sawant and Hanauer are both pressing is raising the minimum wage. The $15-an-hour movement that was launched in Sea-Tac and Seattle is spreading across the country. The Socialist Alternative’s 15Now campaign is organizing in all 50 states — “15 in 50” echoes the 19th-century passion of “54-40 or Fight.” In 2016, at least eight states (California, Florida, Maine, Nevada, Oregon, South Carolina, South Dakota and Washington) could well have minimum wage increases on the ballot. The issue is making headway in cities too, including Minneapolis and Philadelphia. Sawant is organizing the grassroots, and Hanauer is backing some of these wage efforts with his checkbook and his “it’s good for business” analysis.

Hanauer says that since the sky hasn’t fallen with a minimum wage boost, as many business leaders had predicted, efforts are gaining ground. Even former GOP presidential candidate Mitt Romney now wants to raise the minimum wage. Zack Silk, who heads up Hanauer’s think-tank and policy operation, Civic Ventures — self-described as “a small group of political troublemakers devoted to ideas, policies, and actions that catalyze significant social change” — says the early argument for raising the minimum wage to $15 was, “support it because you feel sorry for people.” The argument now is: it’s an economic boon; “If you go big, it leads to big benefits,” Silk says. A Forbes analysis this month found that food worker jobs had “soared” since the Seattle minimum wage rose last year. That should make both socialists and capitalists happy.

Another area of Hanauer’s national and local emphasis is guns. He’d like to replicate the success he had here in Washington with I-594, the gun background check initiative that passed handily in 2014 (triumphing over another initiative backed by the pro-gun lobby). Hanauer sees that success as template for future gun control initiatives that he is supporting and encouraging. At least four states look to have such measures on the ballot in 2016, including Nevada, Arizona, Maine and California. Hanauer says he might also run a follow-up initiative in Washington. He senses that the national turn-around in awareness of gun violence will give these efforts some momentum.

The strategy is to treat gun violence as a public health issue and pass laws that don’t ban guns, but institute common-sense regulations: stronger background checks, for example, and keeping guns out of the hands of people who shouldn’t have them, like the mentally ill, domestic abusers, potential suicides. Hanauer says there are plenty of common-sense provisions that poll well with the public with 70 or 80 percent support, and he likens these laws to successful efforts to reduce highway deaths. Put these on the ballot with substantial funding behind them — funding that outstrips the NRA’s capacity to respond in kind — and you can make progress. “You stand up and fight where they have a massive disadvantage,” he says.

As to the presidential campaign, Hanauer is not backing any particular candidate at this point and won’t until later in the process. He prefers, he ways, to stay out of the “shit show” of presidential politics, but he has good things to say about Clinton, Sanders and Martin O’Malley. Sawant is prepared to jump right in with active support of Sanders and organizing her own party around that effort. In February, she plans to participate in a public debate with supporters of the Clinton campaign, and there is talk about another event in New York that would feature Sawant and Cornell West for Sanders against a Clinton-backer like Sen. Kirsten Gillibrand. Still, if Sanders doesn’t win the nomination or choose to run as a third party, it’ll be interesting to see if the Socialist Alternative party plans to fill the presidential void.

Both activists are planning to get their political philosophies wider circulation with working manifestos. Hanauer is co-authoring a book with Eric Beinhocker, the executive director of Oxford University’s Institute for New Economic Thinking, due sometime this year. The working title: “Capitalism Redefined.” Sawant is at work on an autobiography, slated for mid-year, with the working title “American Socialist."

Both want to prove that what has happened in Seattle is not a fluke, but part of fundamental shifts in the political landscape. Seattle activist Jonathan Rosenblum, writing for Alternet, suggests the lessons of Sawant’s Seattle success are potentially a harbinger. “[P]olitical activists frequently underestimate popular alienation from capitalism and openness to alternative politics. Seattle is not Topeka or Albuquerque or Birmingham, and independent politics will manifest differently based on local circumstances. But Sawant’s re-election signals that an independent politics grounded in working-class interests can resonate with politically disengaged people.” As Sawant aide Philip Locker says, the socialists are out to prove that their movement is not “some freak Seattle sideshow” without wider application.

In a recent political profile, Molly Ball of The Atlantic concluded that “Plenty of rich guys set out to change the world; Hanauer is faring better than most.” Hanauer says, “Seattle is a great place to be interested in these ideas. Right place at the right time.”

For both, 2016 offers a bigger, multi-platform opportunity to expand the market for the classic range of Seattle-style progressive politics, from serious reform to radicalism. By year’s end, we’ll know if there are many buyers.

As Crosscut explores Seattle and the state's influence elsewhere Knute Berger will write about Rick Steves and the marijuana legalization movement in an upcoming article.