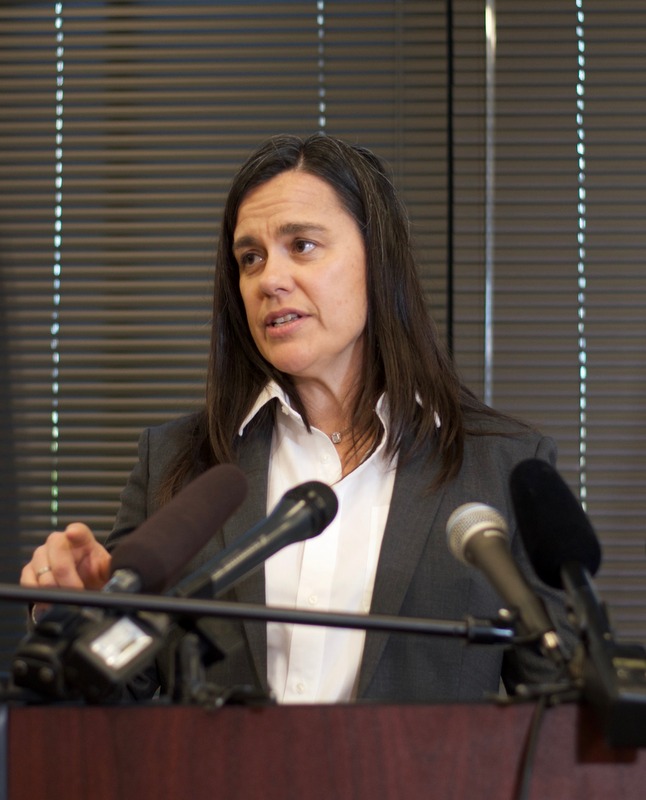 Amid the hustle and bustle of afternoon meetings at the state Legislature the other day, four people walked across the capitol campus, converging from different directions and, perhaps, different ends of the ideological spectrum.

One was Jennifer Stuber, a University of Washington professor of social work and head of a suicide prevention group called Forefront. Another was the director of the state pharmacy association. The third was an ordinary citizen and gun owner, and the fourth was the lobbyist for the National Rifle Association in the western United States.

Together, they walked to a small table set up at the front of a hearing room and sat down, side by side, to testify in favor of a bill. As they pulled out chairs, sat down, and introduced themselves in turn to the House Judiciary Committee, it was the culmination of a year-long effort. Among them, and 14 others signed in to testify that day, the committee chair noted, not a single one had come to oppose the measure.

Of the four, three shared, in addition to opinions on the bill, their own stories of how suicide had touched their lives.

Aimed at suicide prevention, the measure builds a figurative beachhead of education by creating and incentivizing suicide prevention training for pharmacists and gun shop owners - who between them dispense the means of about 70 percent of suicides. The proposal would also create the Safer Homes Task Force, which would work with groups ranging from the Department of Fish and Wildlife to the veteran's community to integrate suicide prevention education into activities already being performed, like hunter safety training.

For pharmacists, the bill would add a required six-hour training course to their accreditation process. Gun store owners would be eligible for a tax credit after completing an online training course. Both trainings would focus on how to spot people who might be suicidal, how to talk about suicide, and how to encourage people to store both medications and firearms safely.

The bill as whole, Stuber said, and the proposed task force respond to the fact that easy access to lethal means is a major factor in suicide deaths. While the perception is that a suicidal person is unstoppable, she added, suicide attempts are actually often impulsive -- often, she said, what makes the difference in whether an attempt succeeds is whether there are deadly means at hand. And between them, guns and medication are not only reliably deadly, but often close at hand.

While groups from the Seattle Police Department to the National Alliance on Mental Illness and the Washington Gun alliance participated in conversations leading to the creation of the bill, three main groups were responsible for hashing out the language in the initiative, and figuring out exactly how it could work: Forefront, the suicide prevention initiative run out of the University of Washington; the NRA; and the Second Amendment Foundation, a Washington gun rights group.

Stuber is the co-founder of Forefront. Her organization came up with the idea for the collaboration, she said, and reached out to the other two.

"What was pretty amazing," Stuber said about the hearing a day after it took place, "was that those groups ... historically have not gotten along well." But because the bill stayed focused on encouraging education -- and steered well clear of restrictions -- discussions weren't contentious at all, she added.

"That was just a very cool thing to see some of the barriers that have been in the way come down."

Both Brian Judy, the NRA lobbyist, and Alan Gottlieb, head of the Second Amendment Foundation, said the same: that because the bill focused on a common interest, supporting it had been a natural decision.

Gottlieb said, that when he was approached with the bill, Stuber's explanation of why it mattered "immediately rang a bell for me." As head of a gun rights group, he said, he has often been approached by people with questions about suicide, and even in the aftermath of suicides with questions of how a family could have known.

"I didn't have any answers for them," Gottlieb said, adding that he didn't feel alone in his confusion about the subject, either. So when Stuber approached him, he said, "I was ecstatic."

Gottlieb also added that supporting the bill had a strategic element: Suicides in which a gun are used are sometimes counted as part of gun violence statistics. That makes the amount of deaths from gun crime seem higher than it is, he said.

"If we could lower that," Gottlieb added, "it would be good for us as far as our argument against gun control."

Where the bill will go after the hearing is, of course, an open question. In a legislature sharply divided along partisan lines, and during an off-year (and thus shorter) lawmaking session, even widely supported bills face a sprint to the finish. But the NRA’s Judy also said that he had been working behind the scenes with lawmakers to move the bill forward.