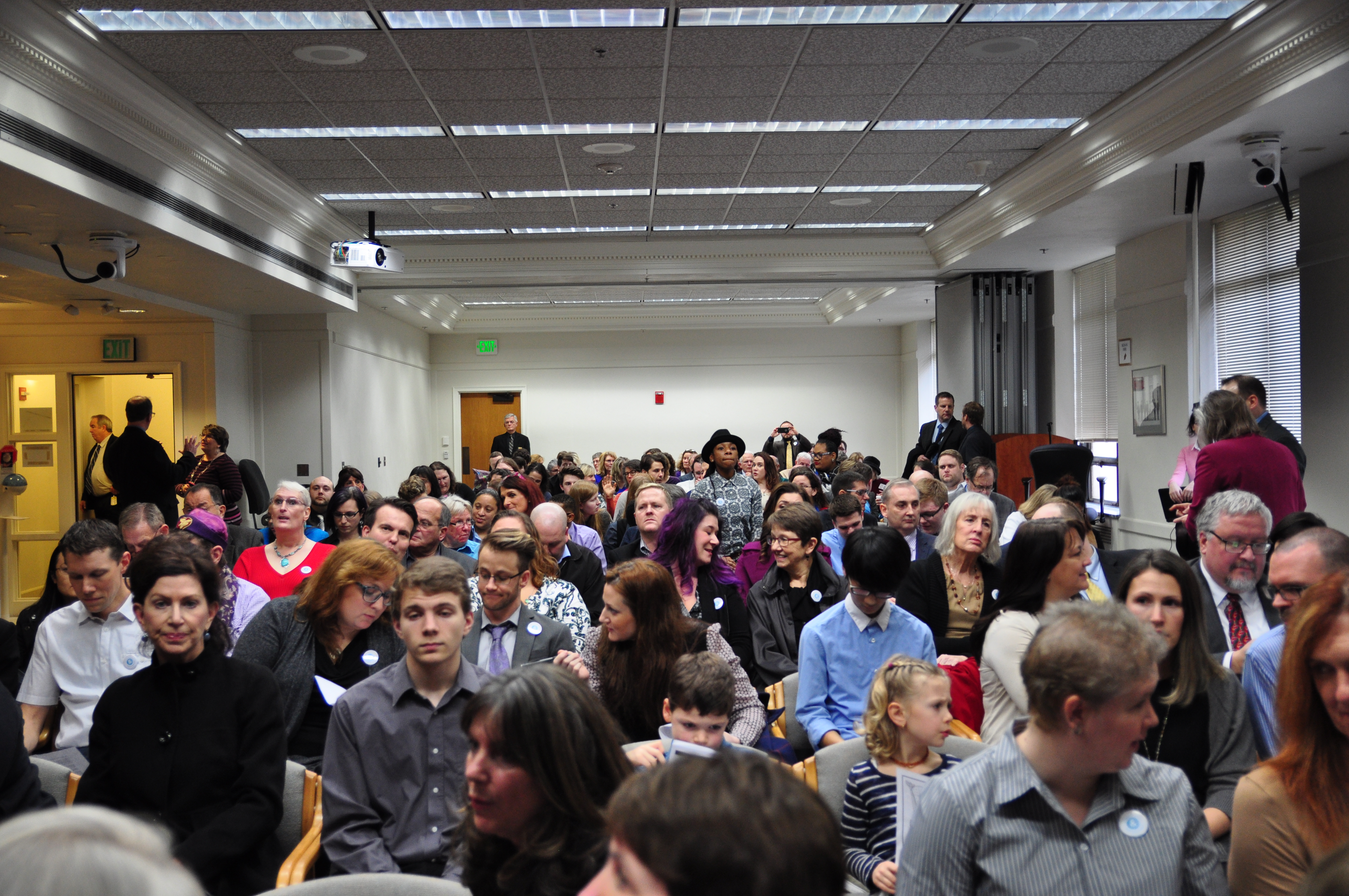 A crowd came to hear and give testimony about transgender rights.

Supporters and foes packed a hearing room to capacity in Olympia today, hoping to get a chance to let the Senate Commerce and Labor committee how they felt about a Christmastime ruling that affirmed the right of transgender people to use bathrooms of their choice.

So many showed up to watch and speak that the Legislature had to open a second hearing room. Before beginning to accept testimony, committee chair Sen. Michael Baumgartner, R-Spokane, remarked that the volume of those signing up to testify — over 300 — had frozen his his computer.

"There are more people signed in than I have seen in my six years in the Legislature," Baumgartner said.

Testimony quickly turned passionate, with Baumgartner frequently having to cut off speakers after their allotted minute-and-a-half was up, and with the audience occasionally clapping and cheering despite instructions from Baumgartner to remain silent.

The bill in question, only four lines long, is a Republican effort to repeal a December ruling by the state Human Rights Commission which required public entities in the state — including all businesses that offer bathrooms to customers coming from the public — to allow transgender people to use the bathrooms consistent with their gender identity.

After the ruling came out in December, a furor erupted when an Olympia YMCA branch moved to comply with the rule, and notified its members of its intentions. Members responded with statements of fear and concern generally focusing on what they perceived as the erosion of privacy rules in bathrooms, especially those rules keeping men out of women's restrooms and changing and shower facilities. Legislators responded, quickly announcing the bill heard Wednesday.

Kat Mahan, a transgender woman with long flowing red hair, and mother of nine, including adopted children, told the committee bluntly that the bill put her in the position of being unwelcome in restrooms of either gender - or potentially even having to prove she belonged in a women's facility.

"I can't use the men's restroom," Mahan told the legislators, because she lives as a woman. If the bill goes through, however, she asked: "How do I prove that I have female genitals?"

Dmitri Keating put it in more personal terms. Identifying himself as a business owner and father of four, he explained to the committee the predicament in which the bill could place his 11-year-old transgender daughter, who has always identified as a girl. If business owners or public officials were suddenly put in the position of policing who uses which bathroom, Keating said, he also saw it possibly even leading to a situation where his daughter might be forced to prove that she was anatomically female.

"The idea that my daughter would be inspected by an owner of a business or a public official, in order to be forced to use a men's bathroom," Keating said, "is unconscionable."

Testimony in favor of repealing the agency's ruling followed along much the same lines, with most of those testifying in favor of the repeal bill citing concern for women, children, and the developmentally disabled. Allowing transgender people to use bathrooms reserved for the gender they have adopted, several proponents of the bill said, would as a side effect allow predators — "deviants" was a term used repeatedly — to gain access to women's restrooms by posing as transgender.

“Parents have a right to expect that when their children go to school, the boys will use the boys’ locker room and the girls will use the girls’ locker room,” Ericksen said in a statement before the start of the legislative session. “This case offers a powerful example of a state agency overstepping its executive rulemaking power."

Yet opponents of the bill — those in favor of preserving the Human Rights Commission's ruling — said the public understanding on the bill left out a key fact: that transgender Washingtonians have been generally protected from discrimination, including in bathroom facilities, for a decade, since the passage of Washington's 2006 Anderson-Murray Anti-Discrimination Act, which enacted protections not only for gays and lesbians, but also for transgender people. The new ruling, several opponents of the bill asserted, just re-enforces the protections included in that act.

The sheer volume of testimony also belied the fact that the bill is unlikely to go anywhere this session. Rep. Laurie Jinkins, who chairs the House Judiciary committee, has said she won't give any bill related to the issue a hearing. Any such bill would likely pass through Jinkins' committee, and as chair, she has the power to keep bills off the docket, effectively blocking them from going to the House floor for a vote.

Reached Tuesday, Jinkins, a Tacoma Democrat, explained her logic: Since the bill would almost certainly not have sufficient votes to pass in a Democratic-dominated house, she said, it doesn't make sense to give it time in an already-short off-year session. Asked if that didn't deny the public a chance to comment, Jinkins said that would be provided by the Senate committee hearing Wednesday, adding that the same logic applies to many bills every year. Even though she doesn't personally agree with the bill, Jinkins said, she drew a line between her personal feelings and simple efficiency, and that the latter had been her main motivation.

Danni Askini, executive director of the Gender Justice League, a Seattle organization that advocates for the rights of transgender people, said afterward that the hearing had followed what she had come to expect from public arguments over transgender issues: mostly misunderstanding, with a healthy dose of fear thrown in, and a steady conflation of transgender people with people who commit sex crimes.