Why a blue state elects a purple government 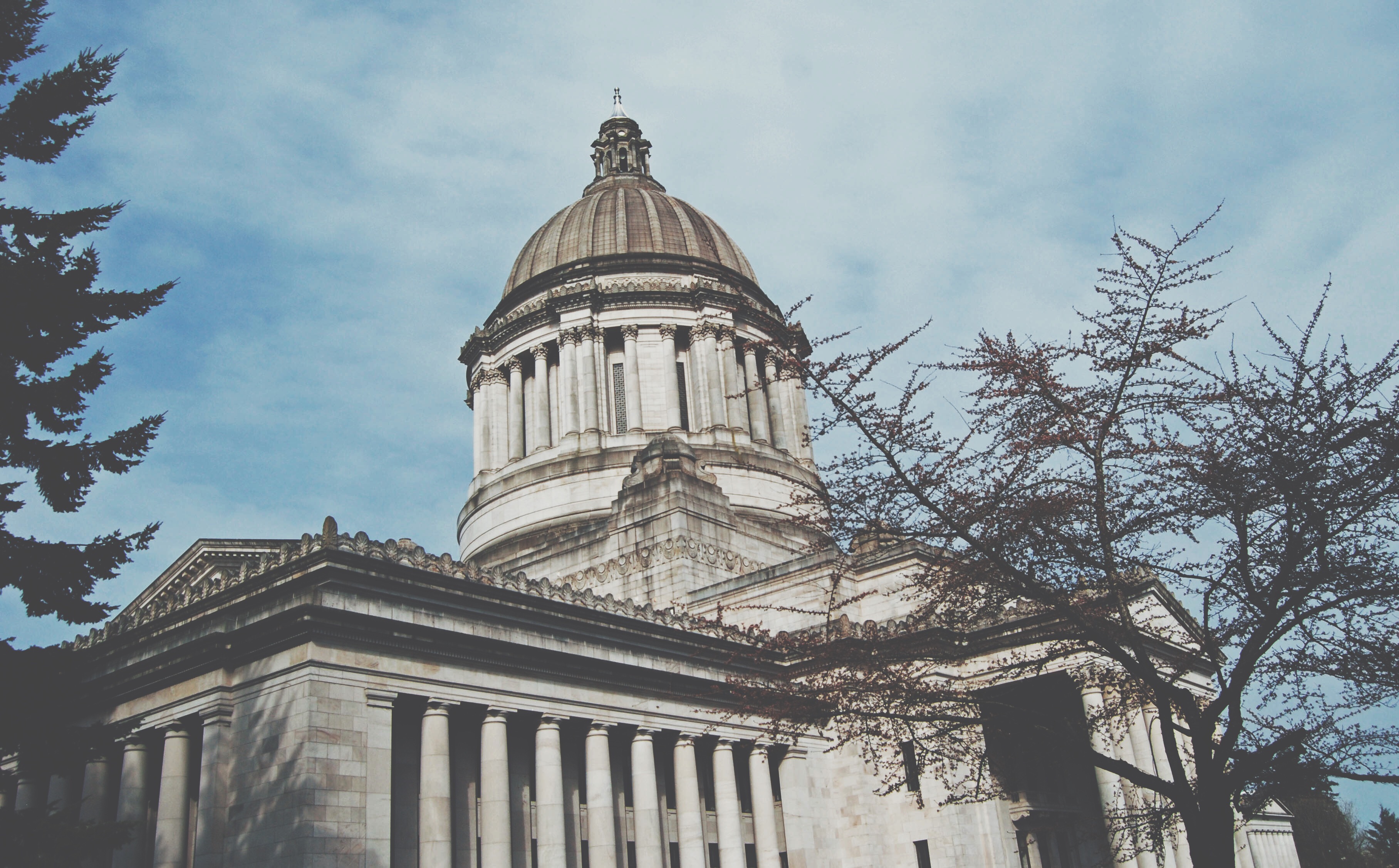 The state capitol in Olympia, WA.

Seattle residents, even the newest ones, know it in their hearts: Washington is a blue state. A lot of those newcomers, in fact, may have found the state's Democratic, even progressive reputation to be part of the allure of moving to the Greater Seattle area, along with the sweet job prospects dangled in their faces.

The state votes so consistently Democratic in presidential elections – whether the candidate is Barack Obama or Bill Clinton, John Kerry or Al Gore – that presidential campaigns generally don't even bother advertising in Washington, says University of Washington political science Professor Mark A. Smith. Even back in 1988, the state was one of the Dukakis 10 – the states that voted for ineffectual Democratic candidate Michael Dukakis, whose campaign against George H.W. Bush never really got off the ground.

Washingtonians haven't elected a Republican as governor since 1980.

As a new session of the Legislature begins, though, there is another reality. In Olympia, Washington looks more purple than blue, and depending where you focus your gaze, the red tinge may be pretty clear. Republicans have such a big role in the government of the Evergreen State that not much will happen without them. They have almost half the seats in the House of Representatives, where the Democrats' margin is down to 50-48.

Republicans control the Senate, and Republican chairs of Senate committees have used their power to stop action on everything from death penalty elimination to measures designed to make it easier for minority ethnic group members to win places on city councils and school boards. More importantly, the Senate's Republican control means that the House Democrats and Gov. Jay Inslee have to work with Republicans in both houses to pass budgets or enact any major legislation.

Members of both parties express optimism about working collaboratively during this year's 60-day legislative session, which opens today in Olympia, even while engaging in the inevitable party disputes that will set the stage for tough elections in the fall.

The elections later this year offer Republicans a chance to take over the House of Representatives, while preserving their control of the Senate. The trend in the House elections has been steadily upward for them. A House victory would put all the legislative controls in Republican hands, potentially reshaping the state's generous spending patterns for social services.

And – dare the Republicans hope? – the governor's office is up for grabs. Despite the three decades-plus since John Spellman, the last Republican governor, left office, the party has had several close runs, including an all-but-tied loss in 2004 that took months of legal wrangling to confirm. Just last week, a survey by highly regarded pollster Stuart Elway pointed to serious weaknesses in Gov. Jay Inslee's standing with the public.

Like a lot of states, Washington has a serious divide between its urban centers and the more far-flung suburbs, exurbs, small towns and rural communities. The crest of the Cascade mountains, the so-called Cascade Curtain, has loomed large for generations, a natural geographic divide that could well serve as the state line dividing Washington into two.

Yet the House Republicans' bright Minority Leader Dan Kristiansen has a point when he argues that the urban areas right along Puget Sound are the ones that are really different not only from almost solidly Republican Eastern Washington but from many of the other areas in Western Washington that elect both Democratic and Republican legislators. Kristiansen knows the pattern well: He represents eastern parts of Snohomish and Skagit counties, where the jobs are much much harder to find than just a short distance away in areas closer to Seattle and the rest of the Pugetopolis. The voters in some of these areas, particularly on the Olympic Peninsula and southwestern Washington, are quite likely to vote Democratic in the presidential elections even as they split their ballots on state contests.

As much as there may be two Washingtons, House Speaker Frank Chopp, the Legislature's most powerful Democrat, has made a career – a very successful one – around a simple premise: One Washington. That's been his motto for more than a decade, since the Democrats gained control of the House in late 2001 after three years of 49-49 ties.

The concept of One Washington has all along been that the government can operate for the common good, which has an appeal to Democrats' orientation to help wide sectors of society. But it also has been a way to appeal to the middle class. And it probably helped Democrats in outlying areas, protecting them from attacks that the party is the tool of Seattle liberals.

In practice, One Washington has meant a rather middle-of-the-road form of leadership in the House. Even in the mid-2000s, the Democrats' progressive wing was complaining that Chopp was so eager to protect the party's incumbents in more rural areas that farm or business interests could dictate policy or win tax favors. And some of their favorite causes get more lip service than leadership support, as may have happened last year when Gov. Inslee's push for a carbon tax never even came to a vote by the full House.

Given the narrowing of the Democratic majority in the House, the One Washington idea may have run its course as a campaign tactic. At times it has seemed a relic of a less-divisive past. There were times in the extended budget talks last year when it seemed like the state was about to fall prey to D.C.-style gridlock, yet lawmakers and the governor managed to avoid any government shutdown. And all sides in Olympia continue to point to the budget, additional investment in education and passage of oil trains safety legislation and other bills as examples of what can be accomplished in divided government.

In the 2016 legislative session, both Democrats and Republicans are likely to put most of their attention on fairly practical matters. They will add money to catch up with the costs of last year's extensive wildfires. They will continue work on meeting the demands of the state Supreme Court (and the public) for improving public schools, adding to the steady but could-have-been-faster progress. (Inslee's likely opponent, Bill Bryant, is quick to say that bipartisan work on education that took place in a legislative task force in recent months could have happened two years ago if Inslee had shown more leadership.)

During press briefings last week, the Republican and Democratic legislative leaders and Inslee all said that, under the necessity of divided power, they have been working well together. It's hard to argue otherwise, even though it's in everyone's interests to say that kind of thing: Gov. Inslee is going to be attacked as impractical and ideological, poor at making government work. And Republicans are on a mission: to convince voters to trust them with full control of Olympia, including the governor's office.

Even to win the House, where they last held the majority in 1998, though, Republicans face some realities, including the state's very real tilt toward the Democrats. The presidential election will bring out the Democrats' less affluent and minority voters, who tend not to turn out so much in years when only state or local offices are up for grabs. And then there's that elusive governor's office. The UW's Professor Smith says the Republicans are up against a a very particular structural problem: Washington is one of just a dozen states that elect governors during presidential years. So that high Democratic turnout is a factor every time the governorship comes up.

As he notes, though, a party can seek to overcome such factors with something like the recruitment of better candidates. Republicans argue they have, indeed, become good at that. Democrats, though, point to the possible effects in this state of a presidential ticket that might include or even be headed by Donald Trump or Ted Cruz. They also can see about using issues like women's rights, access to reproductive health services and emergency services to the homeless as issues to make Republicans look obstructionist and get out their own base this year.

No matter how blue the vote this presidential year, the Democrats can expect to face challenges in getting out their supporters in the off-year elections the next few years. Evergreen State residents and their leaders in Olympia will likely face the reality of one divided Washington, and the need to make it work.