Bertha permitted to move 150 feet forward – will she make it? 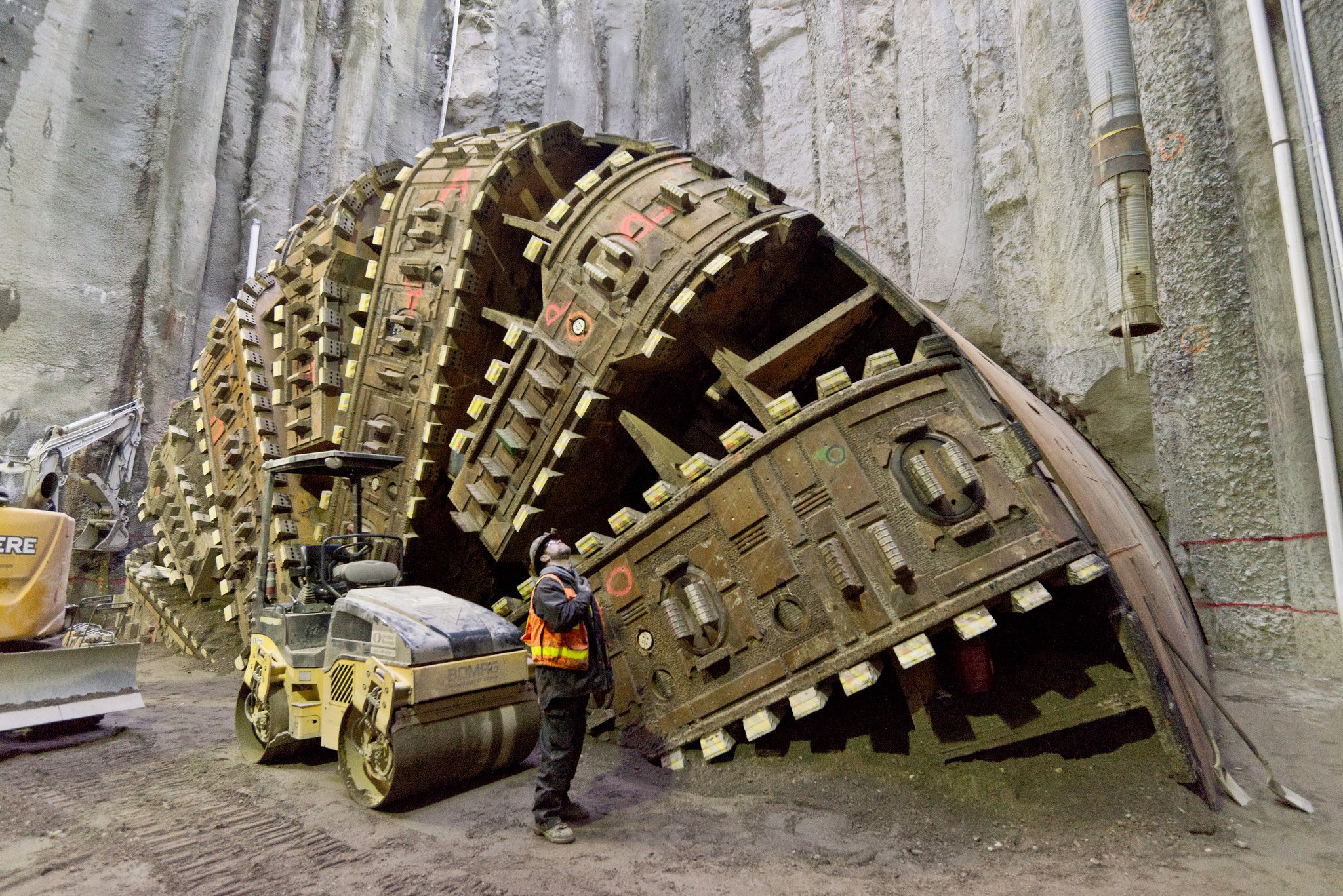 A worker in front of part of Bertha's repaired cutter head while a pit was being refilled shortly before tunneling resumed.

After over two years of halted progress, operations began anew on the tunnel late last December. But after a 15-foot-deep sinkhole opened up downtown on January 13, Inslee and the Washington State Department of Transportation pulled the plug. An official with Seattle Tunnel Partners, the contractor group responsible for the project’s operations, admitted that tunnel operators had been focused on the success of the machine when operations resumed, giving less attention to monitoring soil conditions.

In the conference call, WSDOT tunnel administrator Todd Trepanier confirmed the department's view that a management lapse had occurred. “We came to the conclusion that it did have something to do with the management oversight,” he said, adding that calculations showed STP was removing too much soil, resulting in the sinkhole.

There was no immediate comment from Seattle Tunnel Partners. Chris Dixon, who heads the group, was on vacation and unavailable Tuesday.

The larger question everyone asks, and will likely ask for many years to come, is, who pays for these delays and overruns? The state’s answer to that question is that the contract with STP was written in a way that puts responsibility largely on the contractor, therefore protecting taxpayers from cost overruns. (STP will surely challenge its level of responsibility in courts.)

But the flip side to that contract is that the “means and methods,” as Trepanier refers to operations, are solely on the shoulders of STP. In fact, too much intervention on the part of WSDOT could hurt the department’s chances in lawsuits down the road.

As such, WSDOT has little grounds to critique or oversee management within STP except when issues of safety — like, for example, a sinkhole — cannot be ignored. “That’s how the contract is set up,” said Trepanier, “for STP to watch themselves. … It’s only when it’s apparent that it was resulting in a safety issue that we have contractual responsibility to act.”

The governor said Tuesday he had been prepared to delay work until he and his office was satisfied with the changes and the level of oversight. Inslee said he was. “It’s fair to say this contractor has a new machine, new management and new quality assurance system. … I see it as them changing the quarterback out, or at least the tight ends.”

Still, the new oversight will be housed under the STP umbrella.

The entire tunnel project — functioning highway and all— was originally scheduled to be completed at the end of 2015. But the boring machine ground to an overheated halt after dirt and grit penetrated the machine’s seals. STP blames an improperly identified steel pipe; WSDOT hasn’t weighed in on what it believes caused the problem. The machine began operations again only after two years of excavation, repair and testing. The latest timeline calls for opening the tunnel and rebuilt highway to traffic in April 2018.

Under the new approval, Bertha will be allowed to move forward about 150 feet. If operations function to the state’s liking, the machine will be allowed to proceed another 100 feet to “Safe Haven 3.” There, Bertha will get to rest for a couple weeks while crews do a top-to-bottom inspection. If it passes muster, the machine will get clearance to dive below the viaduct. That's regarded as an especially challenging part of the project.

STP's Dixon has assured the public numerous times that a sinkhole will not open under the viaduct. The reason? Because the tunnel’s project managers will pay attention.