City ponies up $650k for businesses impacted by construction 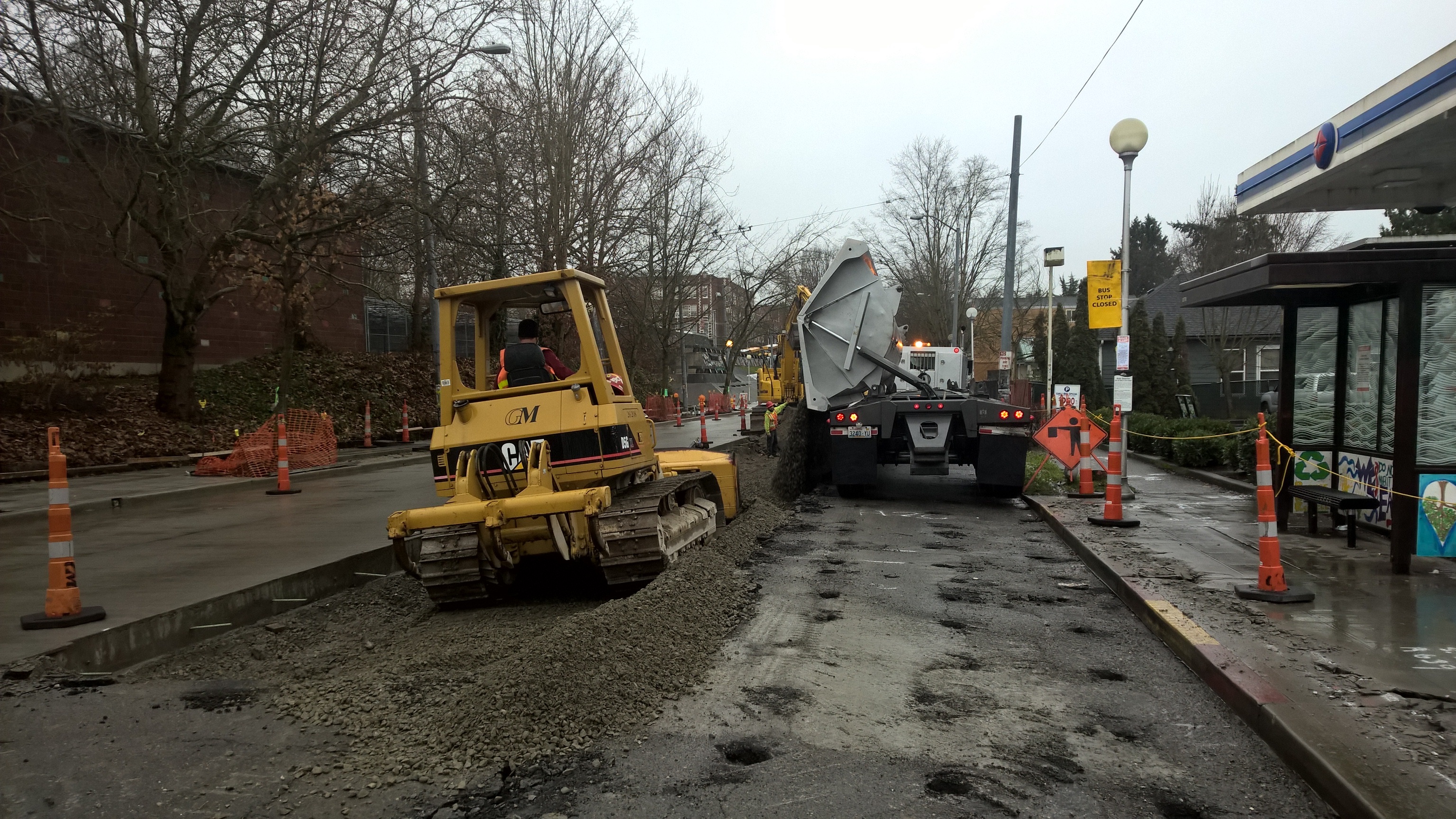 A portion of the 23rd Avenue corridor project last month.

Responding to intense complaints, Mayor Ed Murray said Monday he would make $650,000 in federal grant money and tax credits available to small businesses along 23rd Avenue, which are bending under the weight of road construction. Many of the business are minority owned and the mayor painted the decision — which goes against general city policy forbidding mitigation funds to private businesses — as largely a question of race and equity.

“Is this project intrinsically racist?” he wondered aloud.

If it turns out the answer is yes, Murray said, he would pull the plug on the whole thing.

Navigating the Central District has become, frankly, a nightmare. The redevelopment of 23rd, one of two main corridors through the heart of the historically diverse neighborhood, was rolled out in the McGinn administration, but Mayor Murray has gone on the record saying he supports the project. A water main needs replacing, the sidewalks are outdated, the streets are narrow and the entire stretch is unsafe to anything but cars (and sometimes not even then).

But the project was approved just as Seattle was poised to explode out of the gates of the Great Recession. And as the population has grown and housing prices jumped, the more affordable Central District has become ground zero for gentrification. Already, minority-owned businesses have been on the decline, and the massively disruptive 23rd project threw gasoline on the fire.

Currently, all northbound traffic between Jackson and Union is redirected to Martin Luther King Way (which, as a result, has its own congestion issues). The southbound route on 23rd is open, but slow and tricky to navigate.

It was never supposed to be this bad. Originally, the project was to be completed in stages until John Street. But delays on the first stretch starting at Jackson meant the second leg to Union started simultaneously.  Not surprisingly, small businesses up and down the corridor – 701 Coffee, Central Barber, Flowers Just 4 U, among them – have been complaining of devastated business and calling for help from the city.

The Washington state constitution complicates what help looks like. It prohibits local government from giving local tax dollars to private businesses. By that standard, the businesses are out of luck.

But there was a big to-do about reimbursing waterfront businesses — to the tune of about $15 million — for the disruption caused by the seawall replacement. Wasn’t that a tax subsidy? Murray repeated an argument Monday that representatives of his office have been making over the previous couple weeks: Those businesses had to be totally closed and if the city didn’t offer some mitigation, they would sue.

Despite initial resistance to providing mitigation to the 23rd Avenue businesses, a few things appeared to push the mayor toward the $650,000. First, an acknowledgment that communication of the project could have been better. “We did not do a good job communicating with businesses,” he said. The Seattle Department of Transportation is said to have performed extensive outreach leading up to the project — Councilmember Mike O’Brien described it in an interview Monday as “SDOT on a new level” — but didn’t follow-up as well as the department could have, especially when it became clear that there would be delays. “The waterfront [project] also went sideways,” said O’Brien, “but the businesses were at the table.”

The second spur was an attack from Gerald Hankerson, head of Seattle’s NAACP, that struck at the heart of Murray’s administration. “‘It’s all a part of an overall strategy to push black and minority businesses out of Seattle … because they don’t want us there,” he said to the City Council in a meeting last week. Murray referred to Hankerson’s remarks Monday, calling them “very serious allegations.”

Although O’Brien doubted anyone in the city harbored this motive alleged by critics, he said, “Intent aside, they make a very good point.” Development is changing the Central District rapidly. Boxy apartments replace older and more affordable homes daily, routinely selling for over $500,000. Paul Allen’s real-estate company Vulcan recently purchase a huge swath of property on 23rd and Jackson. And the population of African Americans, once the majority, plummets each year. “A lot of that development doesn’t feel like it’s community centered,” said O’Brien.

Because of these questions of city fault and racial inequity, Murray dug up $400,000 from a federal Community Development Block Grant, already allocated to Seattle, and “up to $250,000” in tax credits. Both these sources are exempt from Washington’s constitutional restraints because they are not local tax dollars. The funding will only be available to small businesses, of which there are between 20 and 30 along 23rd. Brian Surratt, head of the Office of Economic Development, said businesses could use the money for either improvements or operations.

Murray took the response to Hankerson’s evisceration one step further: “Given those allegations,” he said in a statement, “the City will make a new assessment of the project to examine carefully its race and social justice impacts, to ensure the project actually benefits the community. If it does not, we will end it.”

Whether or how Murray would follow through on this is unclear, but it raises a hard question of how to deliver equitable but not overwhelming infrastructure investment. O’Brien was not quite on board with the mayor. “I can appreciate the frustration of how we do this,” he said, “but the question is not a choice between investment and gentrification or not investing. We need to find how to [invest] without massive negative impacts on businesses.”

Complaints from businesses about development — from the waterfront, to South Lake Union, to Capitol Hill, to now the Central District — are nothing new. Should the city provide mitigation there as well? The waterfront and Murray's response here could easily provoke other requests — and slippery-slope concerns.

Murray all but said Monday that the Central District businesses are only getting this help because they are so many are minority owned; he pointed to “particularly high-risk of displacement factors.” Businesses in Madison Valley, he said, would likely be denied.

When construction strikes at other minority owned businesses in places like Rainier Valley, the pledge from SDOT, Murray and O’Brien, though, is that the city will do better with the overall projects. It better, because Murray promised this $650,000 was a one-time deal.