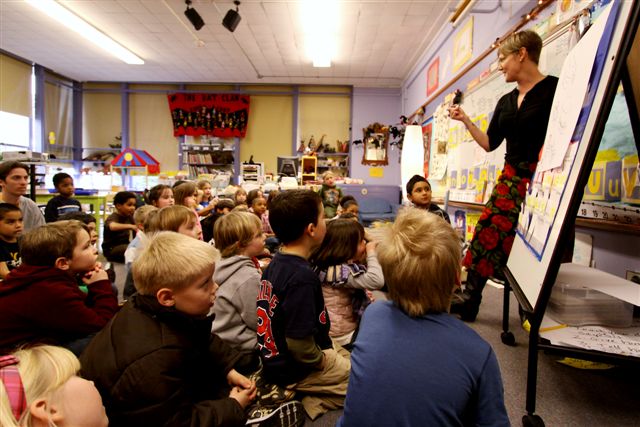 A teacher with her students

A plan to study solutions to Washington's education funding gap seems all but sure of enactment after its approval by the state Senate.

The bill came out of a bipartisan task force put together by Gov. Jay Inslee, and it has been the main hope for maintaining progress on educational improvements this year. But the proposal's future seemed to darken dramatically last month when a key Republican senator made a last-minute statement about blocking the measure if a key clause wasn't removed.

The issue for Sen. Steve Litzow, the Senate education committee's chair, was a deadline, specifying that the Legislature would allocate enough money to end the dependence of public schools on local property tax levies by 2017. The version of the bill supported by the committee dropped the 2017 deadline.

But Tuesday afternoon the Republican who sponsored the bill, Sen. Ann Rivers, R-La Center, offered a version of the measure that stuck with the original 2017 deadline and lined up with a similar bill in the House of Representatives. Shortly after, the Republican-controlled Senate voted 26-23 for her bill with the deadline restored.

Getting schools off of local funding is a key requirement of the McCleary decision handed down by the state Supreme Court during the 2012 legislative session. In that decision, the court said funding education was the state's most important constitutional obligation. Because of the state’s slowness to carry out changes, the court has imposed fines of $100,000 for every day that goes by without a fix.

Passage in the Senate all but guarantees the bill will be signed into law. A companion bill with nearly identical language passed out of the House early in the session 64-34, meaning that unless the Democrats who control the House have had a major change of heart, the Senate version will have more than enough votes to pass. After that, it would only need the signature of  the governor - and Inslee has been a loud supporter for the legislation came from a task force Inslee himself established.

But with passage seemingly a safe bet, criticism of the bill arose from some Democrats in the Senate that the bill doesn't go far enough.

"This is a bill that proposes to address the problem without actually addressing the problem," said Sen. Maralyn Chase, D-Shoreline, in a release after the vote. Calling the measure "an empty promise," Chase pointed to the fact that the bill lacks any funding for education — the central requirement of the McCleary obligation. Supporters of the measure have said the Legislature will respond to the self-imposed deadline for a state takeover of all funding for basic education, but would need until next year to come up with solid funding solutions.

Besides setting the 2017 deadline, the bill formally extends the work of Inslee’s education task force and provides a quarter million dollars to analyze the funding requirements of local schools, including breaking down teacher compensation by region. Figuring out how to work teacher compensation into a new statewide system will be a major task in fulfilling the McCleary obligations.

Inslee praised the Senate’s passage of the measure, as well as the House’s work on its version of the bill.  “I appreciate all the work of prime sponsors Rep. Kristine Lytton and Sen. Ann Rivers and others who continue to work collaboratively on behalf of our state’s one million school children,” he said in a statement. “Legislators can get this done, and I remain confident they will send this bill to my desk.”