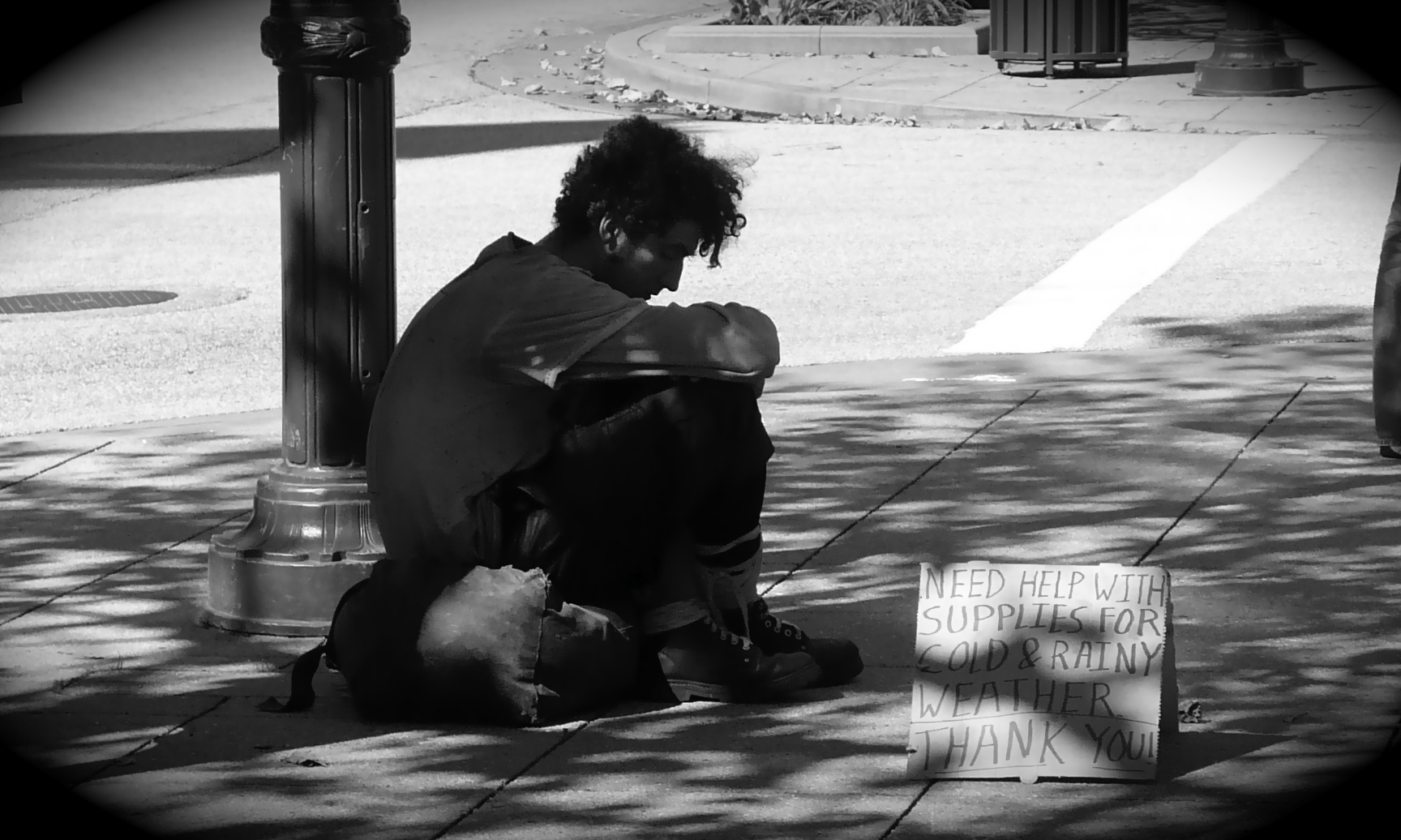 It wasn’t until Nick Lintz had swallowed 24 sleeping pills with a bottle of Vitamin Water, passed out in the parking lot of a Safeway and woke up in an Issaquah hospital that he ever considered entering an adult shelter.

At 23, Lintz is a man of God now, and a week away from finishing Union Gospel Mission’s clean and sober program. He wears a ball cap low enough to hide his eyes as he talks, burning through the details of a battering life: Foster care at 8, drug addicted at 13, in and out of jail since 16.

But even when he was addicted to heroin and meth, even as he fled foster and group homes and slept on the streets, Lintz thought he was above the older people who slept in downtown shelters. “I’d never walk on this side of the street,” he says in an office at the Mission near Pioneer Square. “I’d always cross the street up the block because I just thought this was the scum of the earth. I looked at these people like, ‘I’m never going to be one of those guys.’”

Nick is not alone. Even as homeless young adults age out of youth-focused services – losing a breakfast here, a bed there – and approach the day they only qualify for adult services, many maintain they will figure it out when it gets to that point, a not surprising reaction for any early twenty-year-old. But in Crosscut’s conversations with a number of young people, one option was consistently off the table, well before ruling out sleeping on the streets. That option was entering an emergency shelter or seeking adult services.

Phrases like “sketchy” and “end of the road” are thrown around loosely. “I felt like if I didn’t go to a shelter I hadn’t hit rock bottom,” says Lintz. “I could pretend that everything was okay as long as I wasn’t in a shelter.”

Homeless is something of an umbrella term. However, as the number of people on the streets rise even amid massive investments into services, there’s a growing understanding that treating the homeless as a uniform group is far less effective than treating individuals. It’s why data on the demographics and needs of people in shelters and on the streets is so sought after.

If there’s any group that breaks that standard "homeless" label, it’s young people. As hard as it is to gather good data on the adult population, it’s even harder to paint a solid picture of how many youth and young adults don’t have a consistent place to sleep. King County’s survey of homeless people, called the One Night Count, garners significant press, and policy makers lean on its results all year. But young people do not necessarily struggle with homelessness in the same way – they don’t always sleep on the street or in a shelter, but may stay with a relative one night, a friend another; they may be in a foster home for months before leaving or being kicked out; they may travel up and down the coast and across the country, often on the run from a broken family life. On a given night, these youth and young adults may have a roof over their head or a couch to sleep on, but neither are guaranteed the next night. This is a kind of homelessness in its own right.

In recognition that One Night Count doesn’t properly capture young people, King County has a parallel survey called Count Us In. This survey is almost an inverse of the One Night Count: as opposed to volunteers going out and tallying tents and RVs, youth and young adults must come forward to participate. And rather than answer homeless or not homeless, the survey asks more subtle questions, like “Where did you live in the last 3 months?” A lot of young people would not describe themselves as homeless, even if their housing is unstable.

The difficult transition was detailed by four individuals who shared their stories over coffee, shortly after waking up from a night at ROOTS youth shelter in the University District – Dean Williams, Demetrius Sullivan, John Heath, and Dion Johnson. Their stories run the gamut, from Dean who has no parents and has struggled with homelessness for years, to Demetrius who only recently lost his apartment after a breakup with his girlfriend. They come from different places – Wenatchee, Monroe, Memphis, California – and none of them look the same.

What they do share is their age, all either 24 or 25 – about as old you can be and still stay at ROOTS. By this point, they’ve already begun to age out of programs. Places to stay and meals to eat are harder to come by. “If you’re younger, you’ve got more shelters,” says John. “Once you reach 22, 23, you start aging out of facilities and you’re kind of screwed. Once you reach 25, there’s like two facilities.” The weekends are especially hard.

Some, like Dion, stay in friends’ homes or just stay up all night reading. Dean says he’ll go to Share facilities occasionally.

Although they don’t say it as bluntly as Nick, the sense is that as long as they’re not one of the people at a downtown shelter, they’re still okay. In fact, no one is harder on the downtown homeless than some of the young people. When asked if they see themselves in the older crowd, Dean says, “It’s not even the same thing. It’s a lifestyle for them. They have a career being homeless. They’re not even trying anymore…. [Shelter’s] a depressing place to go. Everyone there has given up.”

Dean’s refrain is a similar one – the people downtown are there because they stopped trying, an avoidable scenario with the right mindset.

“I was born and raised to survive so I’m not worried,” says John.

“The main thing, is I just need to figure it out,” says Dion.

“Hopefully before then I’ll save up enough money to have a place,” says Demetrius.

Megan Gibbard coordinates youth homeless efforts with King County’s All Home committee to combat homelessness. Before that, she was a case worker with plenty experience working with young people. “That is a really common thing they say: 'no, no I’ll be fine,'” she says. As young people age out, she says, “one of two things happen: Kids, when pressed, realize that they have other resources like family because it is better than going to an adult shelter.

But that's not always an option.“Or," she says, "we lose kids and we have not caught them early enough and they are going to the streets and stay in shelter and their prospects are grim.”

In a perfect world, this moment of facing down the adult system should never come. “Week one [of staying in a youth shelter] we’d say 'great, our plan is to get you out of here,'” says Gibbard. But in reality, the resources to do that aren’t there. “So ROOTS becomes a housing program, which it’s not.”

That’s not to say there is no help. King County operates what is called the Youth Housing Connection, a coordinated entry point for young people seeking permanent, affordable housing. The idea is that, instead of going place to place looking for housing, a young person completes one application with the help of a case worker. They are then entered into a system and ranked based on their “vulnerability” – essentially those who need and could benefit the most from help are likely to receive housing first.

Gibbard is intensely committed to coordinated entry, but seems to acknowledge that the resources don’t match the need. “What do people do on a waiting list?” she says. “They wait…  There is a risk of harm when they are placed on a waiting list and they think ‘Great, I’m good.’” But in reality, many of them will never get off that waiting list. Director of ROOTS Kristine Cunningham says she’ll hear from some of her clients that they’re on the list and that they believe they're on the way to housing. Some even bid her premature goodbyes. But then time will pass and they won’t ever be contacted again.

A good case manager should warn his or her clients of this possibility, says Gibbard. But some don’t.

The fact that Nick Lintz is still alive at Union Gospel Mission is a testament that adult shelters do good. He smiles, speaks thoughtfully of his relatively new relationship with religion, and tells about finding purpose. He plans on going to Seattle Central Community College for human services, specifically chemical dependency.

But making the transition from the world of youth homelessness – where at least there’s a community and independence – to a place like Mission is to admit something. “Being on the streets is all about sticking it to the man, don’t be part of the system,” says Nick. “And the Mission was part of the system.”

The answer to this scenario, one of many in the complicated world of homelessness, is more affordable housing for young people, earlier contact in shelters and more upstream work. But those need money and consensus on the best way to deploy, both of which are hard to find. Until then, there’s a gap in the system that will continue to grow the population of people living on the streets.