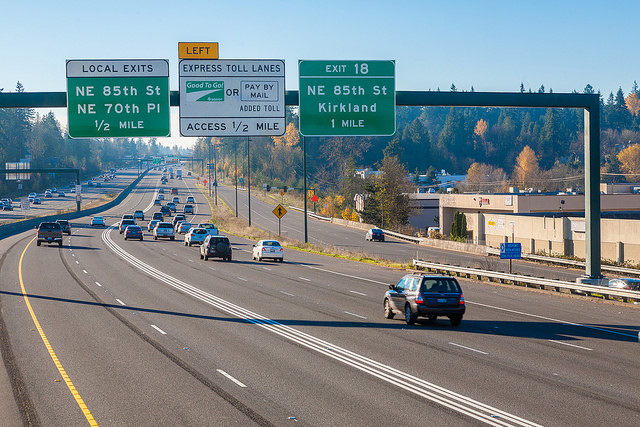 Standing in a control room with nearly a hundred screens showing traffic conditions around metro Seattle, Gov. Jay Inslee on Tuesday unveiled a package of changes underway and already completed to address Eastside congestion on I-405, as well as repairs to the state’s aging main arterial.

“We’re almost six months into the two-year launch of these lanes and the results are mixed,” Inslee said of new toll and express lanes on I-405. “I’m directing WSDOT to move on short- and long-term solutions to address these chokepoints.”

While Inslee unveiled upgrades to state accident response capacity as well as repairs to expansion joints up and down I-5, he spent the bulk of his time talking about fixes to I-405. Reporters also devoted the bulk of their questions to 405.

Of 14 changes to I-405 listed in materials distributed by the Governor’s office, eight involved changes to lane access striping and signage, including five such changes already completed. Three more of the listed improvements consisted of plans to monitor choke points and think up options for improving them.

The state has phased in a series of upgrades to the route, including a 10-mile carpool lane and a variable-rate tolling lane. Traffic since has caused an uproar, however, especially over congestion at the route’s northern end. Some commuters have called on the state to shut down the toll-lane program, gathering tens of thousands of online signatures to a petition.

A study released earlier this month by INRIX, a traffic analysis firm, found that trip times hadn’t been improved by the project, and that in some cases they had gotten worse.

Yet Inslee seemed unfazed by the recent history of the project. In optimistic terms, he portrayed his proposal as a package of incremental fixes to make the toll lanes more efficient. And when reporters asked him about motorists dissatisfied with the plan as a whole, he answered brusquely that those drivers could “talk to their legislators” to express complaints.

Calling the results “mixed,” Inslee emphasized that the project has improved trip times for bus commuters, and that 600,000 trips have been recorded in the toll lanes since they opened.

Inslee also portrayed the Legislature as still supporting the I-405 plan in general.

“There has not been a bill introduced in the legislature to abandon what the legislators created in 2011,” Inslee said. “Legislators understand that what they created, they want to see if it can have positive results.”

The remarks were Inslee's own reading of recent events, which have been highlighted by Senate Republicans essentially firing the head of the Washington State Department of Transportation late last month, Lynn Peterson. They cited the performance of the toll lanes as a factor.

And while no bill seeks to cancel the toll lanes completely, Sen. Andy Hill, R-Redmond, has introduced a bill that would switch one toll lane back to a free, general-use lane, and other prominent Republican senators have also been loudly skeptical of the toll lane scheme in general.

After Inslee's statements today, Republican Rep. Mark Harmsworth, R-Mill Creek, issued a statement praising parts of the governor's action, especially the lifting of tolls on weekends and other quieter commuting periods, but saying that Inslee’s package amounted to “a Band-Aid” on the problem. Harmsworth sponsored a bill identical to Hill’s this year.

One additional improvement is to modify the computer programs used to adjust tolls in the lanes, said Patty Rubstello, who heads Toll Operations at WSDOT. The overall theory behind the system is that it will monitor traffic in the lanes and increase prices as the lanes begin to fill. The ideal is for the system to have just enough cars in the lane to to keep traffic moving at 45 miles an hour. Since the toll lanes opened, the agency has been updating the system so that it will change prices faster to keep the lane from blocking up, Rubstello said.

The governor also called for additional lanes on I-405 — but just the study of them. WSDOT staff explained after the event that the governor had requested funding to study adding lanes in short sections on the northernmost and southernmost portions of the highway.

Other changes Inslee unveiled included funding for upgrading old expansion joints on I-5 over the next three years, and a proposal to increase funding to the agency’s Incident Response Teams by $10 million. Those teams include special trucks that can push or pull stalled vehicles, including buses, and respond to other blockages. Part of the Incident Response funding request is already before the Legislature.