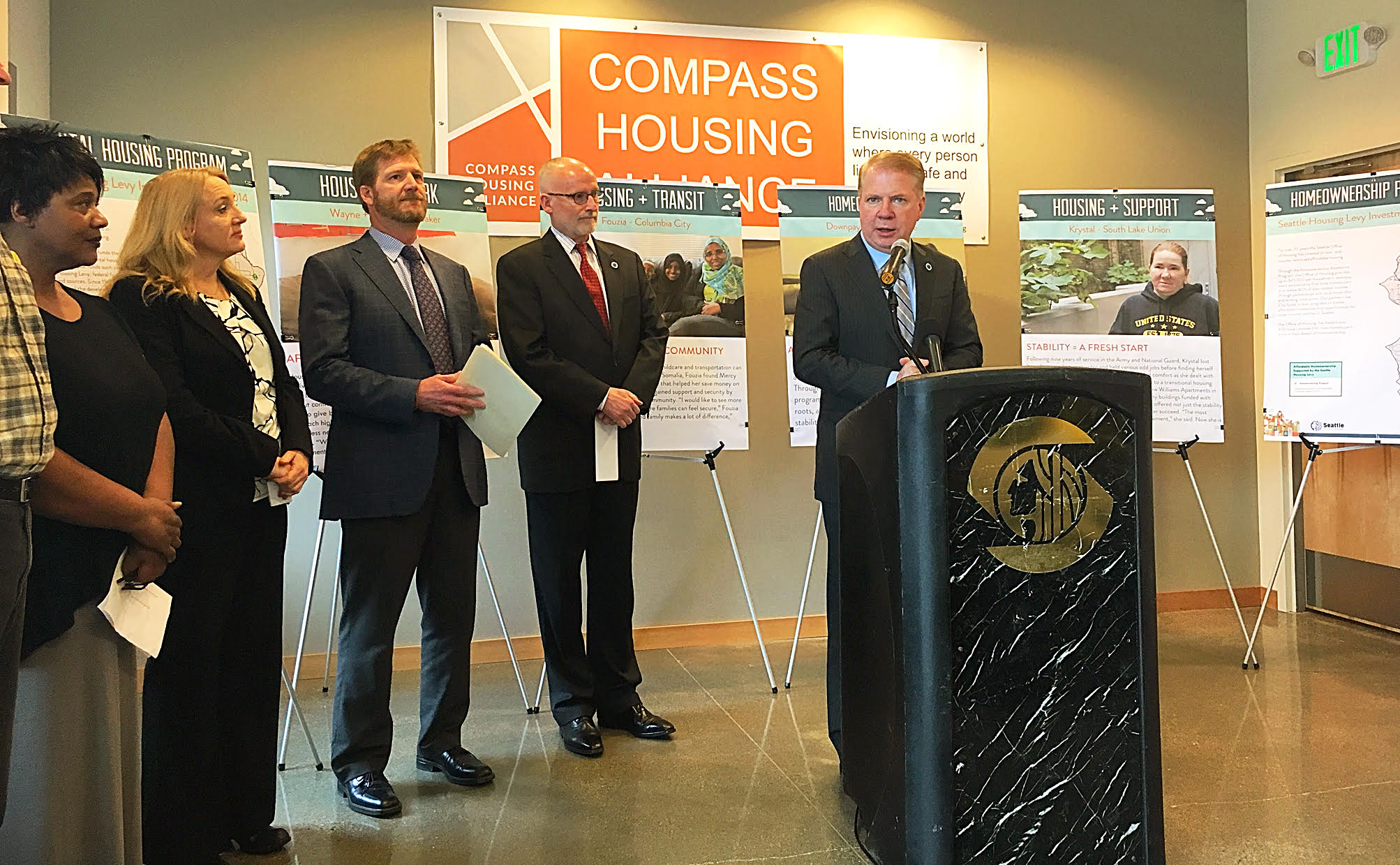 For a developer of low-income housing wanting to add, say, 74 units in uptown or 16 units in Columbia City or 84 units in Mount Baker, the financing is likely to be built on a bar-stool of state, federal, local and private funding. By the end of next year, one of those legs could be gone: That's when Seattle’s $145 million housing levy is set to expire.

Mayor Ed Murray announced his replacement proposal Wednesday, twice the former levy’s size at $290 million. That number could change over the course of the next several months as the City hosts five public meetings to discuss the proposal. The Seattle City Council will also have its say.

But while the exact number could vary, the levy will almost certainly be significantly larger than the one preceding, a sign of how huge the issue of housing affordability and homelessness has become in Seattle. “There’s nothing more important this year,” said Murray.

Much of Murray’s first-term agenda has been built around passing levies, a strategy that has yet to fail him, or even come close for that matter. Despite running the largest levy in the City’s history last fall, the $930 million Move Seattle transportation package, Seattle voters hardly blinked, passing it by more than 10 percentage points.

As important as Move Seattle was to Murray’s transportation agenda, renewing the housing levy is perhaps even a higher stakes matter politically for the first-term mayor, despite its smaller price tag. No conversation has dominated Seattle like its growth and affordability, a debate that shows no sign of quieting. The success of Murray’s Housing Affordability and Livability Agenda — a list of more than 60 recommendations for making Seattle more affordable — is arguably his single largest political priority in advance of the 2017 mayoral election. And central to HALA's success is the passage of a larger housing levy.

The majority of the newest levy — about $200 million — would go toward the production and preservation of more affordable units. This is the money most relevant to developers of low-income housing, including non-profits. The Office of Housing is bombarded with proposals from organizations like Compass or Catholic Community Services to add more affordable units. But, says Beth Boram with Compass, “It’s always very competitive [for funding]. They get more projects than they can fund.” Compass’s Janet Pope says that the agency finishes one development every 18 months. If the newest levy passes, says Boram, they could do one a year.

And if it doesn’t pass? “We’d be dead in the water,” says Pope. Not only would it jeopardize future projects, but because non-profit housing developments take three or more years from conception to reality, it could kill projects in the works right now.

On the preservation side, the Seattle City Council passed an ordinance last summer to give the City advance notice of when an affordable apartment building was to be sold. At Murray's announcement, Al Korpela, a wiry man with a voice that carries, told a story of finding a cheap apartment geared towards seniors, ecstatic over his luck. But shortly thereafter, the apartment went up for sale. Through funding from the feds, the state, private donations and the housing levy, Capitol Hill Housing, another non-profit housing developer, bought the building and Korpela could stay.

The rest of the levy would go toward homelessness prevention programs, homeownership assistance and operating costs for service providers.

Murray’s reveal comes as the City is still in a homelessness State of Emergency, declared by Murray and other West Coast municipal executives in November. Much of the motivation for that declaration was to catch the ear of the federal government to recruit more financial help. But Murray showed little confidence that any help is on its way anytime soon. “As a former legislator,” he said, referring to his time in the Washington Legislature, “I can’t think of a single thing I began work on in one year to have it happen in that same year… . I want to be clear, these things do not happen at once and they do not happen quickly.”

With every new levy come complaints of higher property taxes. Although Seattle’s rate is lower than surrounding cities, Seattleites have seen increases over the last year. And there is a small amount of irony in increasing the price of a house to fund affordable housing. Murray himself admitted running levies “is not the most progressive approach.”

But the specter of levy fatigue — which in the coming months will surely became a topic of conversation once again — has never materialized into reality so far. If housing passes in November, more are sure to follow.