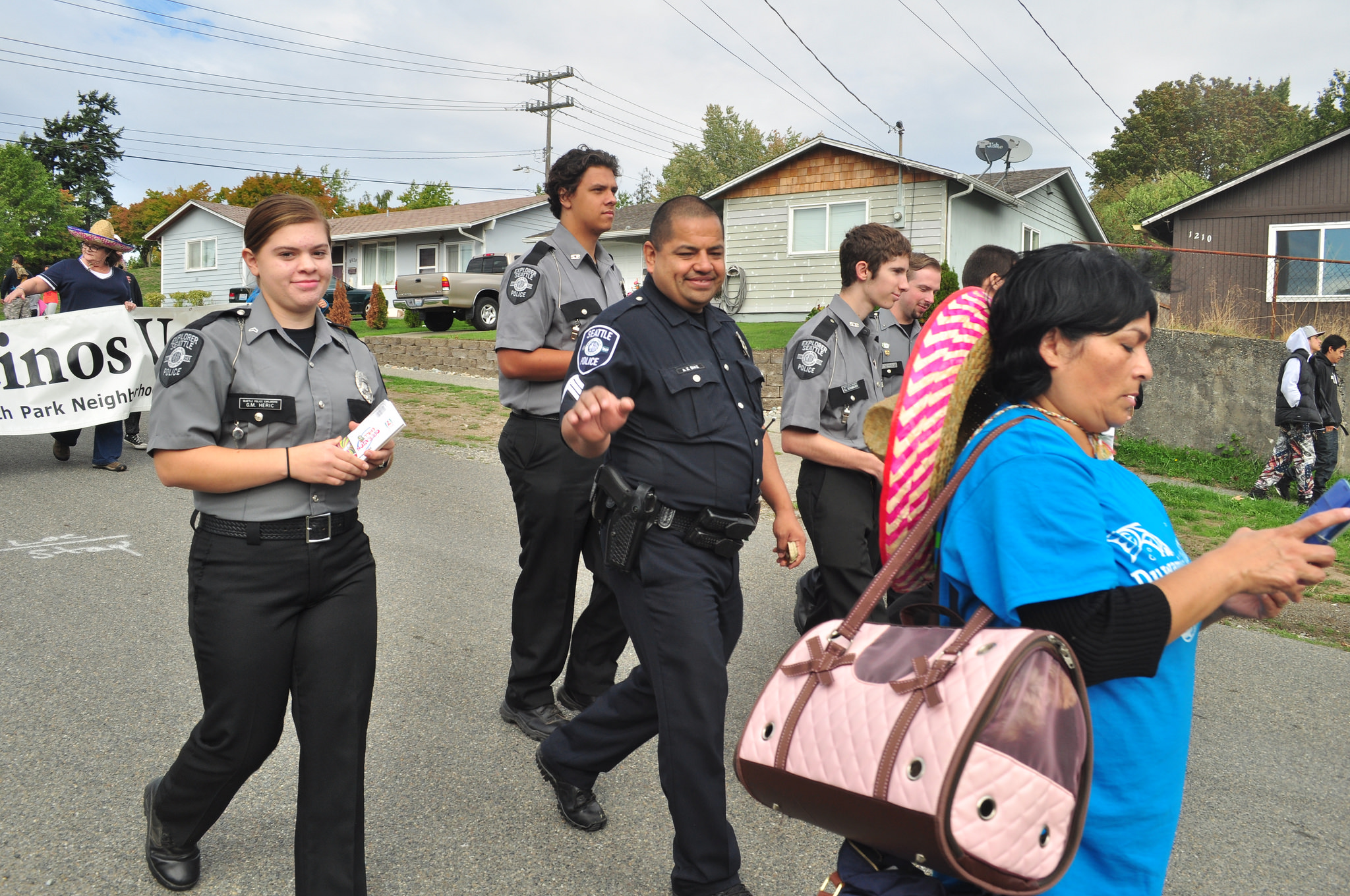 A Seattle Police delegation at a South Park parade in September: Sometimes police and community get along well.

In the posturing that is Seattle’s federally mandated police reform effort, the relationship between the innovative Community Police Commission and the well-established officers and leadership of the Seattle Police Department is among the healthiest between any two parties in the process. In fact, when the federal judge overseeing reforms, James Robart, recently suggested that aspects of collective bargaining needed his approval, the CPC found itself defending the famously conservative Seattle Police Officers Guild.

It is all the more remarkable given the long-time resistance of police unions, here and elsewhere, to citizen oversight. And SPOG, the police union, has at times been the object of impatience if not hair-tearing frustration by activists and even reform-minded politicians, particularly in the lead up to the launching of the federal process.

The CPC was created during the negotiations between the City of Seattle and the Department of Justice after the U.S. Department of Justice found the Seattle Police Department used excessive force and showed patterns of bias. For all intents and purposes, the commission was a more permanent outlet for the community voices — from the ACLU, NAACP and others — that pleaded with the DOJ to open an investigation in the first place. Former Mayor Mike McGinn pointed to the creation of the commission as a major step forward.

Indeed, the commission's creation has attracted attention elsewhere, with local versions popping up in some other recently announced reform agreements around the country.

But the good relationship between police and the grassroots commission here pops out even more when you compare it to Cleveland, the second city to create a Community Police Commission after Seattle’s. Several Cleveland commissioners have accused the president of Cleveland's police union, Detective Steve Loomis, of intentionally sabotaging the commission’s work from the inside out.

Amid all the tension over the progress of reform in Seattle, in fact, community advocates and cops have managed to sit and stay at the same table, despite their disagreements and sometimes conflicting philosophies on policing. Heck, they may even like each other.

The combination could very well be an awkward one. After all, it seats community representatives who were friends of John T. Williams, the Native American woodcarver almost inexplicably killed at the hands of an officer, next to people who worked with that very officer.

But with the exception of one CPC meeting, in which Stuckey threatened to quit the committee, the relationship has been cordial. “They don’t marginalize Kevin,” says SPOG President Ron Smith. “They treat him like a commissioner.”

The respect Kevin is afforded spreads to the broader SPOG force. Smith says that the commission has "their charge underneath the consent decree. We’re not always going to agree, but we can talk to each other. I have a really good relationship with [CPC co-chair] Lisa [Daugaard].”

The goodwill built between the unions and the commission  is highlighted in the reaction to the recent comments from U.S. District Judge Robart. In a court filing last month, Robart wrote that any new appeal process for police discipline cases created through ongoing collective bargaining negotiations must get approval from the court. That poses an interesting question, not yet encountered in the City's reform process: What is the relationship of a federal judge to state-defined collective bargaining rules?

Regardless of the answer, it’s no surprise SPOG recoiled. “I don’t understand why he needs to make that statement,” says Smith. “We’ve been collaborative in helping this settlement agreement along. I don’t know what he means by that and it’s concerning.”

The CPC was a little unsure of what the judge meant as well, but regardless submitted an amicus filing— essentially the opinion of an outside person or group — opposing doing anything that could disrupt collective bargaining. “There is no evidence that the collective bargaining negotiations currently underway in Seattle are being used in a way that violates the civil rights of any person or group of people, which might make such a step necessary,” read the amicus.

One might expect that community advocates would jump at any chance to sidestep the collective bargaining process with SPOG; even minor changes to the work of a police officer requires heavy lifts at the negotiating table, potentially slowing the reform process. But that they've put their faith into the negotiating table is an impressive show of respect for what can be accomplished with SPOG, frequently maligned by reformers in the past.

Beyond the relationship with SPOG, the CPC has also maintained warm communications with SPD leadership. Again, that’s not to say they agree with everything SPD does; to a certain extent, the CPC exists because they don’t. But the group’s members have remained consistently positive about Police Chief Kathleen O’Toole and SPD’s Chief Operating Officer Brian Maxey. In fact, just last month the group wrote something of a love letter to the department, with an almost Victorian-era title: Commendation Letter to SPD. “In the midst of various debates about the police reform process,” it reads, “including how to strengthen civilian oversight mechanisms, we wanted to pause and sincerely acknowledge that the Seattle Police Department has been exemplary in recent months in embracing a genuine partnership with community representatives.”

Cleveland, so far, is a different story and to a certain extent the story a pessimist might have expected for Seattle.

The spur to push Cleveland into a settlement agreement was much more highly publicized than the shooting of John T. Williams in Seattle: the death of 12-year-old Tamir Rice while he played with a toy gun in a park. Taking inspiration from Seattle, Cleveland also established a CPC. “I know in our initial work, we used the Seattle Police Commission model because they’re the first of their kind,” says Cleveland CPC co-chair Mario Clopton.

Clopton is a teacher at Shaker Heights High School on the edge of Cleveland. He was born and raised in the city. “I’m 100 percent Cleveland,” he says over the phone. “As a teacher, I saw my students in Tamir Rice. For a life to be ended that way with so many questions unanswered, that was the last straw for me. When the commission came up, I thought ‘I can’t not do this.’ ”

Loomis is the president of Cleveland’s rank-and-file union. But rather than send a representative, as SPOG's Smith did here, he appointed himself to the commission. Then, on Jan. 26, Loomis publicly denounced an investigation into 13 Cleveland officers that resulted in the firing of six of them over their action in a 2012 chase where 137 shots were fired.Loomis called the investigation a “kangaroo court,” and promised to get the officers' jobs back, reports the Cleveland Scene.

That led some of his fellow commission members to question whether Loomis' roles conflicted with each other. “We all understand we have different roles,” says Clopton. “The issue is that his role as the head of the police union seems contrary to the work we’re trying to do.”

After Loomis’ comments, commissioner Michael Nelson of the Cleveland NAACP asked him to resign in a letter, writing, “You do recognize that the reform of the Cleveland Division of Police, the Consent Decree and the commission on which you serve are all a direct result of the conduct of the police on that night? ... You also realize that one of the goals of reform is to improve the relationship between the community and the Division of Police, not destroy it?"

Loomis responded that he wouldn’t resign until three other members, including Nelson, do so as well. He did not respond to multiple requests to talk to Crosscut.

In Seattle, most of the real tension has been between the CPC and other parties to the consent decree, namely the Mayor’s Office and the independent monitor team. While everyone has struck a detente in recent months, getting to the point of collaboration was a slog.

As President Obama looks toward the end of his presidency, he has hung his hat on Department of Justice-led police reform; they have been his answer in Ferguson, Cleveland, Baltimore, Chicago and other cities.

Success in Seattle, the furthest along the DOJ path, would give hope for big accomplishments elsewhere. While not everyone agrees Seattle is an example of success yet, police and the CPC have maintained a cordial relationship that could serve as a symbol of hope — although whether it can be replicated is another question.