Rick Steves knows how to push pot to voters 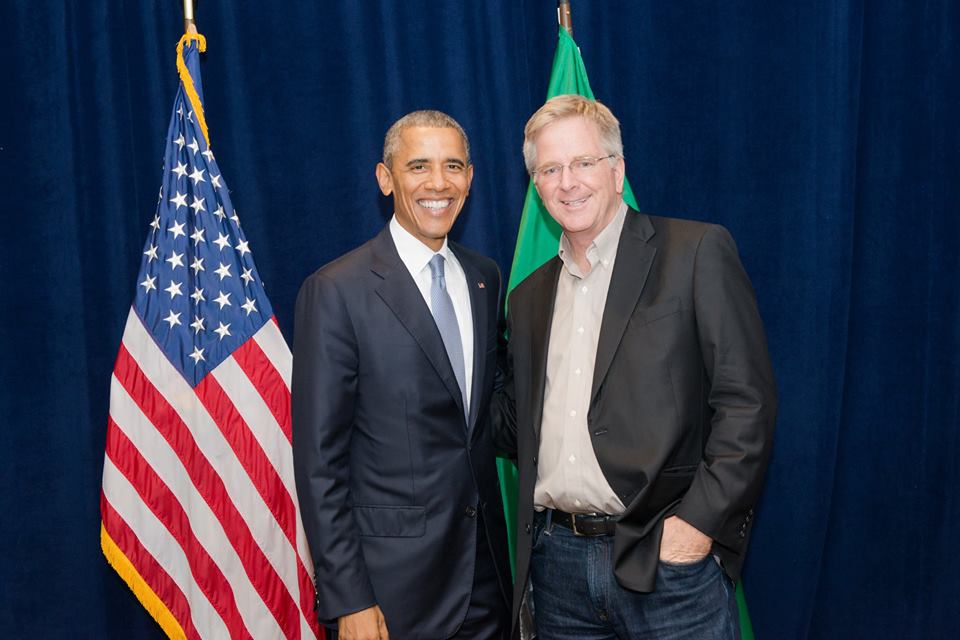 After making what he described as a large campaign donation, Rick Steves got to meet President Obama last year

Rick Steves has changed the way middle America sees the world through his European guidebooks, tours, columns, PBS television and public radio shows. He’s a successful entrepreneur with a teacher’s mien and an everyman persona that can steer curious Americans into foreign travel — not so easy in a country where the majority of residents don’t have passports. But like a good teacher, he makes taking the steps toward broadening one’s horizon easy.

New York Times columnist Timothy Egan captured Steves’ public image in a story a few years back. The travel guru, he wrote, is “benignly suburban to the core, with a bit of a paunch and the ever-quizzical look of someone who would try raw squid for breakfast and not complain about it.” But these days, Steves is about much more than raw squid. He’s become the pied piper of legalized marijuana, not just in the Pacific Northwest, but nationally.

Steves says 2016 is a big year with the potential to tip the balance on marijuana laws in this country. And he intends to be out there, committing his reputation, time and money to make it happen.

He’s already done that. Steves was a driving force behind Washington’s I-502 in 2012 which, along with Colorado’s, broke the barrier for states legalizing recreational pot, also regulating and taxing it. Oregon, also with Steves backing, did the same in 2014. This year, marijuana legalization laws are percolating in many states. A roundup on the Leafly website lists four states where legalization is “almost a sure thing” this year (California, Nevada, Maine and Arizona) and 10 more where there’s activity and reason for hope. If enough states legalize pot, advocates predict, the federal government will eventually follow.

Steves is perhaps the biggest mainstream celebrity speaking out on behalf of legalization, but he is by no means in the fight alone. His commitment to the issue is deeply personal, but he’s also a team player with a role to play. Steves has been on the board of the National Organization for the Reform of Marijuana Laws (NORML) for years and he has worked closely with Washington pot initiative author Alison Holcomb, who now heads the American Civil Liberties Union’s Campaign for Smart Justice with its focus on ending the War on Drugs. He’s also closely associated with Ethan Nadelmann, head of the George Soros-supported Drug Policy Alliance. Rolling Stone has called Nadelmann “the driving force for the legalization of marijuana in America.”

That may be true, but Nadelmann himself has nothing but admiration and respect for Steves, who he calls “a godsend” for legalized marijuana. “I think Rick is incredible,” he says. “I think he’s an exceptional human being,” as he goes on to give the definition of mensch. What makes Steves influential, he says, is not simply that he is well known and seen as an honorable human being by millions of Americans, but that his commitment is broad. Steves often writes about drug policy in his travel books — it is integrated with his work and the way he sees the world. He’s deeply informed on drug policy and its consequences in society. He’s not a celebrity going out with a few memorized talking points, but as a real student with principled beliefs.

And Steves can reach an important constituency: the swing voter. “He raises the right eyebrows,” says Nadelmann. Think of this travel audience: largely white, middle class, middle American, not potheads nor people interested in making a buck in the marijuana business, not even current users but folks who probably haven’t given the issue much thought. Steves, the knowledgeable travel guide, is there to get them to think about it.

First, Steves says, he is not “pro pot.” Steves says, “I am anti-prohibition and pro-civil liberties.” He believes adults should have the right to smoke marijuana. A proposal he didn’t like: a recent Ohio law, defeated last year, that would have established what was essentially a marijuana cartel of approved suppliers. The idea of Big Weed does not appeal to him.

He also doesn’t think legal marijuana means a free-for-all. Steves is for “legalize, tax and regulate.” He supports public safety, cracking down on DUIs, keeping marijuana away from kids. “I don’t want to endorse something that doesn’t address fears and legitimate concerns,” he insists. That doesn’t mean every concern, such as overblown worries that pot will lead to the downfall of civilization. Sitting in his office in downtown Edmonds, Steves gestures out his corner office window. “Marijuana’s legal — you can’t tell!” he exclaims. The suburban village outside has hardly become a perpetual Hempfest. Washington state has taken things in stride.

On the other hand, marijuana laws have a terrible consequence for people of color, the poor, those who are already marginalized in society and incarcerated for something that shouldn’t be a crime, let alone a lifelong mark on one’s record. The Europeans have the right attitude, says Steves. “Tolerate alternative lifestyles or build more prisons,” he says. In Europe, countries have taken different approaches. The Netherlands has its famous hash houses. In Spain, you can obtain plants for personal use from a gardening co-op. In Europe they’ve generally done a better job of mitigating the problems of drugs such as addiction and HIV. Done right, legalization can reduce crime (gangs, the illegal drug trade) and the negative consequences of imprisoning so many people, he says.

The Europeans are now learning something from the Americans, he says. The laws passed in Washington and Colorado, for example, are ahead of the European curve and their policy makers are coming here to study how we’re changing the legalization and regulation landscape. That might help soften attitudes of those Americans who bristle at importing “foreign” ideas but love the idea of “exporting” American ones.

Steves says that his years of taking people abroad on tours have prepared him for spreading a message to a curious but sometimes nervous audience. He’s used to talking to folks who are out of their comfort zones in foreign countries, often for the first time. He also has little to lose if people hate his message. His business remains largely unaffected by his marijuana activism. He can’t be fired, nor is he running for anything. If he loses a travel customer over his marijuana stand, he has said he thinks to himself “Good. Europe’s going to be more fun without you.”

Steves says he relishes speaking to skeptical audiences in such places as Oklahoma or Spokane. You don’t abuse the bully pulpit, he advises, but he tries to make the message palatable, and pragmatic. He reassures audiences by telling them America is great, as is our freedom and the military that protects us. He tells them he’s thankful that he runs his business in America, not Europe. Being a Christian helps too, he says. Steves is active in his local Lutheran church.

With his pro-American bone fides established, conservative audiences are often ready to listen to his views on marijuana. A Rick Steves travel talk might segue from where to stay in Tuscany to the issue of legalizing pot. Steves is comfortable with introducing uncomfortable ideas to the comfortable. Travel has taught the value of this and he quotes Thomas Jefferson, “Travel makes a person wiser, if less happy.” He gets people to think about or rethink the issue. A little discomfort is what travel, and stretching one’s mind, is all about.

His campaign clout in Washington and Oregon has shown that he can move the middle, and that the issue doesn’t have to break down along strict Red-Blue lines. I-502 passed with 57 percent of the statewide vote and captured several rural Republican-leaning counties in Eastern Washington. Oregon’s Measure 91 took 56 percent of the vote in 2014 and also passed in some rural areas.

In 2016, Steves has committed to nine or ten days of campaigning in October for legalization laws in Maine and Massachusetts. He says he’ll go wherever the experts think he can be most effective. To date he estimates he has spent approximately $500,000 of his own money on the legalization fight and thinks he’ll spend another $200,000 or so this year. “It’s more money than I’ve spent on anything than a house.” But if it contributes to national momentum toward legalizing marijuana for adults, he thinks it’s worth the investment.