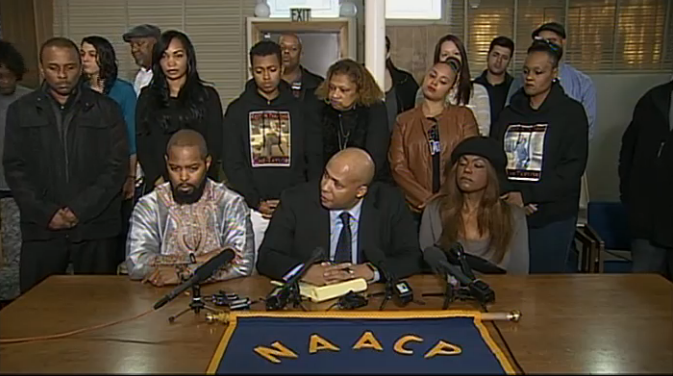 The crowd-sourced verdicts on whether police misconduct caused the deaths of Eric Garner, Walter Scott or Sandra Bland – all subject to harsh or deadly interactions with police – were a resounding “guilty.” But in the case of Che Taylor, who was shot to death by Seattle police officers last Sunday, the footage released of his fatal incident isn't so clear. And because of its ambiguity, the video has become something of a Rorschach test for where someone stands on the Seattle Police Department.

The video of Taylor’s death was taken from the dashboard of a patrol car. Nearby officers in an unmarked car had apparently recognized Taylor from past interactions and, according to the police, seen a handgun at his hip. They then witnessed what they interpreted to be a drug exchange, but waited to coordinate an arrest with backup officers. At the words “move in,” the patrol car whips around a corner, where we see plainclothes officers jump from their car, simultaneously shouting for Taylor to put his hands up and get on the ground.

Nine seconds later, Taylor is shot seven times. In the lead up, we see him bending down, toward the inside of his car. Police say he was reaching for a gun. Seattle Police Officers Guild President Ron Smith says he believes officers Michael Spaulding and Scott Miller behaved appropriately. The NAACP, in an impassioned press conference Tuesday, says Taylor was following officers’ orders and called it “cold-blooded,” “a system failure on behalf of the Seattle PD,” and a “cover-up.”

The video neither confirms nor denies that Taylor was reaching for a gun. SPD has since released photos of confiscated firearms and narcotics, but they’ve done little to convince Taylor’s family, friends and advocates that his death was justified.

Seattle is almost four years into a consent decree with the Department of Justice to reform the police department. But in nine seconds of video, the tenor of the conversation suddenly feels like 2012 all over again.

Moving forward, these are the three key dynamics to consider as the City holds its breath, waiting to see the fallout of Taylor's death.

1. Department of Justice reforms have changed how the shooting will be investigated. That doesn’t mean much for some.

In coming weeks, officers Miller and Spaulding will be investigated on whether their use of force was appropriate. These investigations have been a huge point of emphasis under DOJ-led reforms.

New policies have created a whole team of officers, the Force Investigation Team, to investigate high-level uses-of-force. The new Force Review Board recently received praise for being a more robust version of what was there before, as did the Office of Professional Accountability, the semi-independent accountability office tasked with investigating police misconduct.

But while the monitor, the Mayor, and even President Obama have praised the progress made in Seattle, the death of Taylor lends a human voice to data that show, while trust for police among white Seattleites has been on the rise, it has hardly budged for the African American community.

“Anyone who believed the DOJ could change anything here is silly,” said NAACP's Attorney James Bible. “This is not a model of reform. This is a model of how to perpetuate wrongdoings.”

The system is incapable of investigating itself, he seems to argue. Use of force investigations within SPD have become more stringent, to be sure, but Tuesday’s press conference showed just how little that means to people who don’t have trust in the system at all. “We do not have significant separation between the investigators and the investigated,” said Bible.

NAACP representatives announced Tuesday they would hire a private investigator -- a civilian -- to examine Taylor's death. Although the Office of Professional Accountability's director and auditor are civilians, the office is housed inside the police department and is largely composed of sworn officers. Many believe that this semi-independent office is not independent enough.

2. Police likely followed their training. To some, that's a big part of the problem.

The impression among groups like the NAACP is that use-of-force should go tit-for-tat with the civilian subjects. Even while NAACP head Gerald Hankerson accused SPD of a cover-up, suggesting they planted evidence, he nevertheless said reaching for a gun should not be grounds to shoot.

“Within reach?” he said. “Not good enough for us. I have yet to see any proof that this man actually had a gun.”

But the truth is, officers Miller and Spaulding likely did what they were trained to do. Despite heightened emphasis on de-escalation and crisis intervention, officers are still taught to never lose the upper hand. “Police officers are not required to wait until he picks up the gun and does something with it,” says the police union's Smith.

You’ll hear the same thing outside of Seattle. At the Washington Criminal Justice Training Commission (WSCJTC), the statewide training academy run by one of the more progressive voices on policing, Sue Rahr, officers are taught to stay one level of force higher than the subject. “While the intent and goal is to de-escalate and resolve the situation without use of significant force," Deputy Director of the WSCJTC Commander David Bales told Crosscut last year, "the officer must also be prepared for the worst-case scenario.”

In one mock scenario, for example, a recruit played the part of a man with a knife. The moment the officers in training were within 25 feet, they had their guns out. Proportional? Perhaps not to a civilian. But the recruits were lauded for doing so. “Action always trumps reaction,” said Bales.

Seattle’s use-of-force policies reflects this reality. While it calls for “proportional” response, proportional is not defined as one would expect. “The level of force applied must reflect the totality of circumstances surrounding the situation,” it reads, “including the presence of imminent danger to officers or others. Proportional force does not require officers to use the same type or amount of force as the subject.”

Regarding Taylor, the "totality of circumstances" included the officers' belief he had a gun, thereby creating a perceived "imminent danger."

In an interview last year, Seattle University Professor of Criminal Justice Mathew Hickman touched on this point. “I can certainly appreciate the public view of proportionality,” said Hickman. “Proportionality is intuitive. It makes sense that the public should think force should be matching. But it’s also natural that, to gain control of the scene, [police officers] should have to use a superior level of force.”

It is this gap in the definition of proportionality that’s at the heart of the shooting of Antonio Zambrano-Montes in Pasco who was throwing rocks at police: In the follow up investigation, all three officers said they feared for their lives. It's also at the heart of the confrontation between Olympia police and brothers Bryson Chaplin and Andre Thompson: Their skateboards, some argued, were enough to knock an officer unconscious and steal his gun. And now Che Taylor in Seattle. Don’t expect the gap to disappear without a massive fight with police unions and a serious change in legal interpretations across the country.

3. Ed Murray and the NAACP, despite agreement on body cameras, are in a rough patch.

For many, there’s a sense this investigation would already be over if officers were wearing body cameras. Watching the dash-cam video, one officer was looking directly into the car where there was apparently a handgun. With a body-worn camera, the assumption is he would've had a perfect view of what Taylor was doing.

Murray has adopted the same support for body-worn cameras as President Obama and both of his attorneys general, Eric Holder and Loretta Lynch. Last fall, he announced full funding for body cameras for all SPD officers. Even amid complaints from the ACLU and Community Police Commission that state laws weren’t strong enough to guarantee privacy and transparency, he has repeatedly promised the city would get it right.

The NAACP Tuesday re-stated its longstanding support for body cameras as well, which puts Murray and the organization in the same camp.

But Murray’s relationship with the NAACP has been shaky over the last couple weeks. It started with NAACP's Hankerson accusing the city of using construction on 23rd Avenue to push minority-owned businesses, and black people in general, out of the Central District. Murray called his statements “very serious allegations” in a press conference Tuesday.

In that same press conference, when asked about the Taylor shooting, Murray said he believed the officers had behaved appropriately, although he hadn’t seen the video. The NAACP skewered him for this, with Bible shaking his in disbelief “that he thinks this was an appropriate shooting but he hadn’t actually seen the video.”

It’s an interesting position for the Mayor. The City is in the middle of contract negotiations with SPOG, which could very well determine his legacy on permanent police reforms. Angering the police unions is not what he wants right now. So far he hasn’t, at least not too badly. “I would like stronger statements,” said Smith, “but I understand where we’re at. I understand where we’re at nationally… The Mayor’s got a tough job.”

But he’s also painted himself as the mayor of social and racial equity, especially in his recent State of the City address. “The health of black men is essential to the health of society,” he said in that speech. “In fact, I believe that when young black men are at their best, Seattle is at its best.”

Just a week later, the head of the NAACP is calling on members to turn out on election day and not, apparently, in favor of Murray.

Che Taylor had a checkered past, and Smith says he was under active investigation by the Seattle Police Department. The police knew him well enough to recognize him on the street.

But for an entire community, he was a family man with a “million dollar smile.”

Those two personas are far from one another, a truth seen in the defense of the police and the anger of his family. And with his death, it’s hard not to wonder if the canyon between these two perceptions is perhaps as wide as the split between Seattle’s African-Americans and the police.