Target Boeing: A new push for conditions on tax breaks 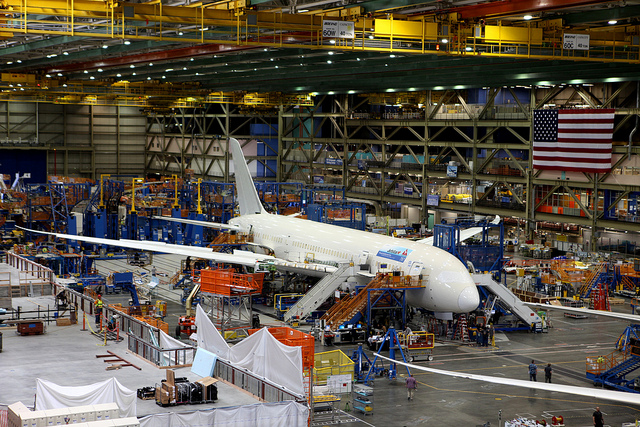 Construction of a Boeing 787 plane.

After lobbying from Boeing last month killed a proposal that would have tied tax breaks for the company to job creation, a group of lawmakers has brought the idea back to life, along with four other bills aimed at accountability.

Farrell spoke at a Thursday press conference with other House Democrats unveiling a handful of bills tied to tax breaks.

The bills in the package focus on attaching accountability measures to a broad range of industries in the state, from the banking sector to oil refineries. Four of the five focus on excluding large corporations from tax credits originally intended to benefit smaller firms. But the centerpiece is one that focuses on Boeing, and would fine the company $2,500 for every job it removes from the state under a set level.

In 2013, the company used the threat of Washington losing out on the 777X's manufacturing to force Gov. Jay Inslee to call a special session. Three days later, state legislators had expanded a deal from 2003 to give Boeing the largest single corporate tax break in the nation, worth $8.7 billion through 2040. The company’s employment numbers in the state have — with the exception of two small upticks — been dropping ever since. By the end of last year, the company was employing just under 5,000 fewer people in the state than when the tax break was signed.

Boeing has pointed out that the state's share of its overall workforce has risen, with job cuts in other areas being more severe.

The Boeing-focused bill introduced Thursday, sponsored by Rep. June Robinson, D-Everett, is a version of a bill Robinson introduced earlier earlier in the year. That bill had bipartisan support, including a Republican co-sponsor, Rep. Cary Condotta, R-East Wenatchee. But intense lobbying from Boeing killed that bill, Robinson said. Condotta and another member who had supported it changed their tune just before a committee vote, and stopped the measure from ever reaching a full vote on the House floor.

Now legislators are bringing the bill back, using a rule that allows late introduction of bills that create revenue for the state. Together, the package of bills is projected to raise about $60 million.

The current version of the Boeing bill goes easier on the company than the original. The earlier version set a required number of jobs that increased each year, and tied Boeing’s tax break to it. The new bill, however, uses the number of Boeing jobs in the state in 2013 as a baseline. Then, Boeing jobs in the state would be counted every year, and for every job less than the 2013 number the company would have to pay $2,500 into an account benefiting state schools.

In 2013, the year the most recent tax breaks were signed into law, Boeing employed just over 83,000 people in the state, the highest number in a decade. By the end of last year, that number was down to just over 78,000, a loss of 5,000 jobs. If the bill were approved, that would cost Boeing around $12 million dollars. The $2,500 fine per lost job is supposed to match the tax break Boeing receives for each employee.

At the Thursday press conference, Robinson said that conversations she had had with Republican senators made her think her measure could find some bipartisan support there.

But the Senate Majority Leader Mark Schoesler told Associated Press that he doesn't support the package. And at least one Republican senator who frequently collaborates with Democrats on bills, Sen. Mark Miloscia, R-Federal Way, said he didn't like the Boeing bill. Although he is open to tax accountability measures in general, Miloscia found the idea of trying to hold Boeing accountable after the fact to be morally repugnant.

Miloscia said he thought the draining of jobs from the state was clearly the fault of the Democrats — including the governor — who orchestrated the tax breaks and failed to force Boeing to agree to specific job numbers at the time. As painful as it might be, Miloscia said, the morally right thing to do is for Washingtonians to honor the deal and take the job losses on the chin through the life of the tax break package. Asked if he thought that would hold true even if Boeing pulled every single job from the state, Miloscia said it would.

“What’s Boeing going to do, pack up their plant? They’ve already built it here, they’ve already spent money and done their part of the deal,” Miloscia said. “I just think it’s morally wrong, once you shake on a deal.”

Miloscia is the chair of the Senate Government Accountability and Oversight Committee. That committee likely wouldn’t hear the bill. But Miloscia, the assistant majority whip in the Senate, has long been known for his advocacy on accountability issues, and is running for state auditor in upcoming elections.

Democratic legislators sponsoring the accountability measures, however, seemed to feel differently about the moral calculous of the deal.

“The purpose of [the tax break] was to maintain and grow jobs in the state,” Robinson said. In interviews about Robinson’s earlier bill, other lawmakers said the deal was predicated on job growth — that was the whole point.

In retrospect, not having hard numbers written into the deal was “a mistake,” Robinson said. “But hindsight is 20-20."