The 'Battle in Seattle' revisited 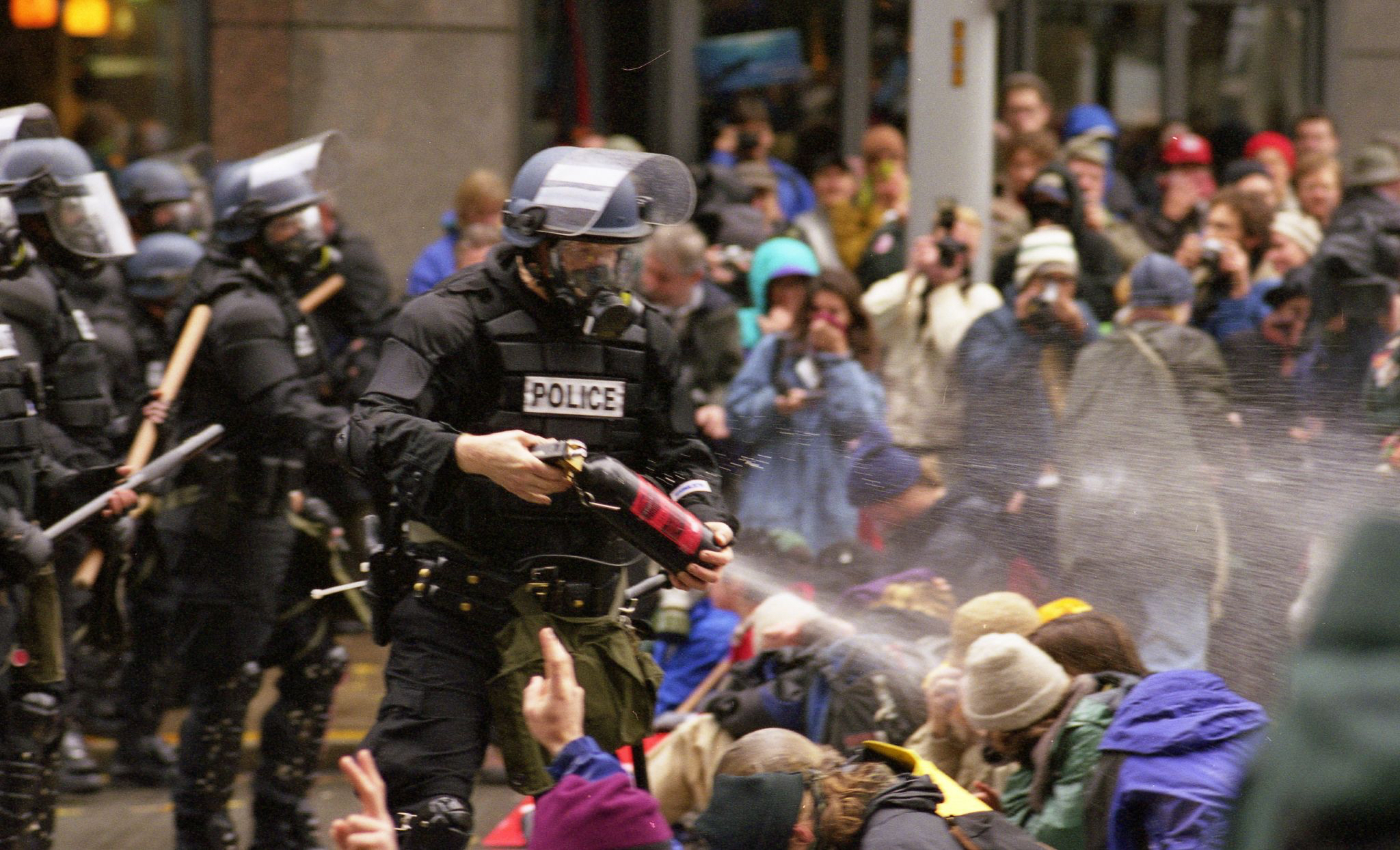 Police use tear gas on a group of WTO protesters sitting in Seattle.

I recently wrote a story for another publication in which I passingly referred to WTO and got an editor’s note back. Young and new to town, this editor didn’t know what the WTO demonstrations were and had to look it up. Editing suggestion: help the newbies know what you’re talking about and explain.

OK, that made me feel old. Oh, shit, I am old. But the olden days are not as old as they used to be. The World Trade Organization anti-globalization demonstrations of 1999 were more than 16 years ago, but for a city entering the 21st century, they were a mass cultural event and touchstone for many of us, including the millennials. The tear gas, the anarchists, the dancing sea turtles: They were part of one of the city’s biggest CNN moments, a rebellion that shut down a global conference, embarrassed the president, cost a mayor and police chief their jobs, and sent a shudder around the world. If a trade-dependent, trade-hungry city like Seattle could blow up over trade, maybe something’s out of whack.

Arguably, the WTO moment was as ephemeral as a whiff of pepper spray, though opposition to massive “free trade” agreements is back after a Great Recessional hiatus. Bernie Sanders and Donald Trump represent two ideological bookends of trade skepticism on the left and right. And Barack Obama with his proposed Trans-Pacific Partnership is the new Bill Clinton, criticized by nativists and labor for selling out the American worker. Many of the arguments are stuck where they were in ’99.

As far as WTO in Seattle, there are a few books and films that dig into — but please avoid that dreadful 2007 Battle in Seattle film with Woody Harrelson and, bizarrely, Ray Liotta as Paul Schell. But I think it’s fair to say that the event was big, complex and worthy of literary exploration, and that brings me to the new novel Your Heart is a Muscle the Size of a Fist by Sunil Yapa (Lee Boudreaux Books: Little Brown $26). Published this month, it makes WTO the novel’s fist-sized heart.

This is a first-time novel, much ballyhooed by critics and jacket-blurbers, the kind of overhyped literary debut that makes me suspicious. Is it really a “literary Molotov cocktail” as described on the jacket by Colum McCann? I’d probably say it was less Molotov cocktail than, say a Harvey Wallbanger — palatable, but why add Galliano?

I salute Yapa for picking such a complicated day in the life of the city — indeed, the world — as November 30, 1999 as his stage for exploring living in our globalized, confused and confusing world. It is a bit like setting a novel at Gettysburg without trying to tell the blow-by-blow of the battle. A cast of interconnected characters are followed chapter by chapter including the estranged, mixed-race teenage son of the police chief (not the actual chief, Norm Stamper, but a character based a little on the real chief), the chief, a couple of activists, a couple of cops and a trade minister from Sri Lanka who appears to be based on the author’s Sri Lankan father. For the most part, the book takes place not only on a single day, but much of it at a single place, 6th and Union near the downtown Sheraton Hotel, the WTO’s equivalent to Little Round Top. This is where the demonstrations erupted into a riot as the police moved to clear the streets of some 50,000 demonstrators from around the world.

Yapa tells the backstories of the characters as events unfold and we follow their inner thoughts, interactions, idealism, and the violence that ensues and how it impacts both victims and perpetrators. Those looking for exacting history should look elsewhere — these events are fictionalized and some of them absolutely never happened. But for someone who wasn’t there, Yapa does a good job of capturing some of the spirit, idealism and cynicism that was so much a part of the event and the kind of generational howl that it represented. Even so, some pretty major stuff is also left out, like the anarchist Black Blocs. Still, the event was complex enough that given Yapa’s micro-focus, it generally works, though I wish the anarchist marching band could have made at least one appearance.

A strong thread throughout the book is how people are trying to live in a world more complicated than slogans and chants. And while Yapa leaves out some of the budding social media aspects that emerged during WTO — demonstrators with cell phones documenting events and going online with stories and images in order to circumvent the mainstream media — it does capture the globalization of our lives: some of the characters are racially mixed, world-traveled, coping with old prejudices and personal problems in an age when right and wrong are tough to figure out (does buying a shirt made in Sri Lanka help or hurt the people and the planet?). The author’s jacket bio says he’s lived in Greece, Chile, Argentina, China, India, Montreal, London and New York. In other words, he is globalized, and so are some of his characters who are chaffed by the impacts of experiencing a wider world. The novel seems to surge into that complexity as the demonstrations and backstories intensify, then reach for redemption amid the personal and cultural chaos.

Your Heart is a Muscle the Size of a Fist often feels like a long journal-dump produced by a young person who spent time abroad after college trying to make sense of it all. Still, as far as WTO goes, I might recommend the story for tone, but not for depth. You won’t come away with a greater or lesser sense of the meaning of the politics, insight on cultural clashes, or an understanding of why all this happened here.

The reader who wasn’t there might also think that WTO was a clash of cardboard characters — which it kind of was, what with the costumes and giant puppets. But Yapa’s protagonists all have inner lives that too neatly reflect stock generational roles and angst: The homeless black kid who rebels against his white cop dad, the angry cop who can’t wait to bust heads, the tree-sitter and protest veteran with an iron will and blonde dreads. The most sympathetic character is the Sri Lankan trade minister who is battered by both sides while seeking improvement for his people. There’s probably a whole novel in his story.

How does Seattle fare in the book? The city isn’t much of a character, though the author has spent some time here and occasionally his descriptions are powerful, like this passage of the moody late wet November view of the city from a helicopter: “In the southern section of downtown the towers of black glass reflecting gray sky like a city rising directly from the water. Like a city climbing hand over hand from the dark depths of the Sound. The tallest towers of a labyrinthine city whose work was buried deep beneath the waves, a society too complicated and brutal to exist in the light.” While his book doesn’t really explore Seattle’s dark side, the trade-happy “world class city” we celebrate has prosperity rooted in global complexities that are not all sweetness and light. The book is a reminder of that, not unlike the cognitive dissonance of WTO that shook Seattle.