When the tsunami hits, coastal defenders could be first to go 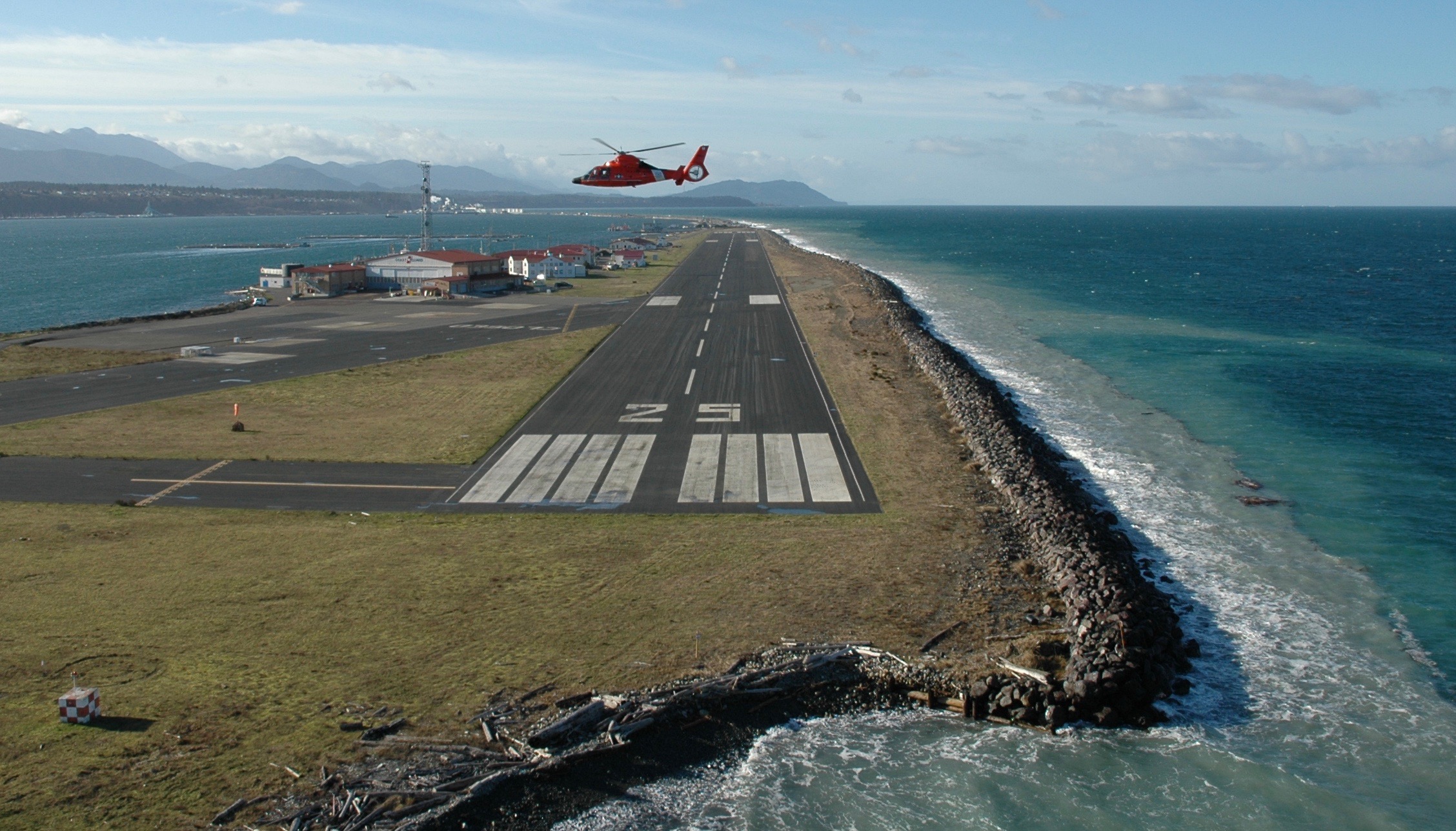 When trouble strikes on Washington’s stormy shores, the U.S. Coast Guard’s Air Station/Sector Field Office Port Angeles is the front line of defense. Its three H-65 Dolphin helicopters provide air rescue along the state’s entire shoreline, Point Roberts to Ilwaco; its patrol boats protect everyone who sails the Strait of Juan de Fuca, from fishing skiffs to oil tankers and cruise ships, and its larger cutters may deploy all the way down to California.

But no one and nothing protects the protectors.

Their base sits at the tip of Ediz Hook, a three-and-a-half-mile sand spit that loops around Port Angeles’s harbor. The Coast Guard station isn’t the only safety facility on Ediz Hook. Three-quarters of a mile down the road sits the base of the Puget Sound Pilots, 52 elite mariners who guide those tankers and other big ships as they negotiate the Sound’s twists and turns. Both might play critical roles after a disaster -- the Coasties as first responders and the pilots in restoring commerce and guiding relief ships.

That is, unless that disaster is the worst catastrophe due to strike the Northwest one of these days or years: the “really big one,” a massive quake along the offshore Cascadia Subduction Zone, triggering a tsunami up to 100 feet high. In that case, all those caught on the Hook will be sitting ducks.

“We’re probably one of the worst-exposed sites on the entire West Coast,” says Lieutenant Kyle Cuttie, the station’s communications officer, as he surveys the 360-degree sweep of sea and distant mountains surrounding Ediz Hook. For scenery, it’s a dream. As an escape route, it’s a nightmare.

In an emergency, the pilots and Coasties always expected to flee the same way they come to work each morning: via the spit’s single narrow road. Then, one year ago, a local oceanographer and geomorphologist named Ian Miller told them what they might face in an earthquake and tsunami.

Miller is the Port Angeles-based field agent for Washington Sea Grant, a UW-based program that I also work for. Among other duties, he scours the Olympic Peninsula for evidence of past tsunamis and talks to local groups about the prospective effects of future megawaves. Last January and February, he spoke first to the pilots, then to the staff at the Coast Guard station. He showed slides of the geological layering left by past tsunamis and explained the periodic nature of subduction-zone megaquakes (which have occurred every 200 to 900 years over the last three millennia; it’s been 316 years since the last). Then he delivered the stinger: Don’t count on driving away before the tsunami hits.

Girdling the base of Ediz Hook is a 96-year-old paper mill, currently operated by Nippon Paper. Its masonry walls, powerlines, and nine large fuel tanks line the roadway like a gauntlet. A steel causeway hangs above. In the event of a megaquake, the loose sand and gravel below will turn to something like jelly. Even if the narrow road doesn’t buckle or sink in the quake, it will likely be buried in rubble or ablaze with spilled fuel ignited by downed powerlines.

“The road off the hook might” — Miller phrased it gently — "be impassable. The way to survive might be a little counterintuitive. It might be going out to deeper water.” If they can get out to 50 fathoms (300 feet) deep, the mighty wave should roll harmlessly under them.

The first to take this message to heart was Eric vonBrandenfels, the Puget Sound Pilots’ vice president. VonBrandenfels’ laid-back surfer-dude affect conceals a dogged concern with hazards like tsunamis that no one else seems to worry much about. Miller provided the ammunition he needed.

“I’m just a pilot,” says vonBrandenfells. “When I talk about this stuff, people look at each other and think, ‘Is this guy crazy?’ But when Ian tells them, they listen. He’s got the science, and the science is irrefutable.”

Goaded by vonBrandenfels, the pilots undertook their own seaborne evacuation trial in March of last year. In this they have the advantage over the Coasties, whose big cutters can take hours to crew up and launch. (Coast Guard helicopters can take off in minutes, but it takes up to hour to ramp them out of hangars where they're stored to prevent corrosion.) By contrast, the pilots’ two 70-foot boats are kept ready 24-7 to meet passing ships. Nevertheless, says vonBrandenfels, “it took us two hours to get loaded and off. At that point we’d be under 30 feet of water.”

Meanwhile, vonBrandenfels nudged his Coast Guard neighbors to consider the threat and join the pilots in a trial evacuation. The first attempt fell through. Then, he says, the publication of Kathryn Schultz’s article “The Really Big One” last July in The New Yorker brought the threat home on Ediz Hook — as it did throughout the region, old news though it mostly was. By September, the Coasties and pilots were ready to undertake their first small-scale evacuation drill.

If a tsunami hits, the Coasties, as well as workers at a nearby salmon farm and any sightseers on the Hook, would likely have to rely for rescue on the pilots. VonBrandenfels figures they might be able to pack 50 people on each of their two boats’ decks, plus 25 to 50 below. That falls short of the 250-plus people who might be on the Hook at a given moment, and makes no allowance for water or food. In a pinch, says vonBrandenfels, another hundred might hunker inside the pilots’ floating dock, which is actually a watertight naval barge that doubles as storage, and hope it survives the battering.

After Miller spoke, a small contingent trekked down to the pilots’ base, boarded and cast off. Someone joked that the Coast Guard would never allow an evacuation because there weren’t enough life jackets. The boat rounded the Hook and reached 50 fathoms in 16 minutes — promising, but still no assurance that hundreds of desperate souls could flee fast enough amid post-earthquake chaos. “If the roads are bad, moving all the people down to the pilot station three-quarters of a mile away would be pretty problematic,” noted Lieutenant Erin Roberts, a contingency and force readiness planner from the Coast Guard’s district headquarters who came out to observe the trial.

The safest solution would be to relocate all the operations that don’t need to be on the water — including even a PX — to safe ground near the Port Angeles Airport, nearly 300 feet above sea level. But that would mean afflicting neighbors with helicopter noise and abandoning a 1935-vintage base with a hallowed tradition. “This is the oldest continuously operating air station in the Coast Guard,” says Cuttie. Abraham Lincoln commissioned the original U.S. Revenue Service facility there.

Far from being vacated, the facility is slated to grow. The U.S. Navy proposes to build a pier for nine vessels up to 250 feet long to escort Trident nuclear submarines stationed at Bangor. It’s intended as a safety and efficiency measure, to reduce sailing time and crew fatigue. Will that mean more boats at the ready or more personnel stranded?

The project’s environmental assessment contains no reference to “earthquake” or “tsunami”; Miller has submitted comments explaining the tsunami risk. Naval Base Kitsap public affairs officer Silvia Klatman confirms that those threats lie outside the assessment’s purview. Instead, she says, the Navy relies on the Coast Guard’s tsunami and earthquake plan, based on predictors that “best address safety of personnel, property and critical missions.”

Good luck, says vonBrandenfels. He worries that the Navy is “adding dozens of personnel to a dangerous location with no exit strategy for a tsunami.” Even the Coast Guard’s Cuttie doesn’t sound terribly confident. “It’s one of those problems that doesn’t seem to have an easy solution,” he says.

Cuttie doesn’t know whether he and his comrades will get to rehearse evacuations in the near future; they’ll be busy with a multi-facility Coast Guard communications stress test in March and an even bigger regionwide “Cascadia Rising” exercise in June. That’s also when the search-and-rescue season heats up. Once again, the Coasties will probably be too busy saving others to worry about how they’ll save themselves.

Cuttie does offer this grim consolation: The station’s full complement is on duty only about a quarter of the time. Evenings, nights and weekends “just a handful” of personnel would be on the Hook.

And so the consummate protectors of public safety are waiting for the Really Big One just like the rest of us: playing the odds and hoping for the best.

Eric Scigliano's reporting on social and environmental issues for The Weekly (later Seattle Weekly) won Livingston, Kennedy, American Association for the Advancement of Science, and other honors. He has also written for Harper's, New Scientist, and many other publications. One of his books, Michelangelo's Mountain, was a finalist for the Washington Book Award. His other books include Puget Sound; Love, War, and Circuses (aka Seeing the Elephant); and, with Curtis E. Ebbesmeyer, Flotsametrics.