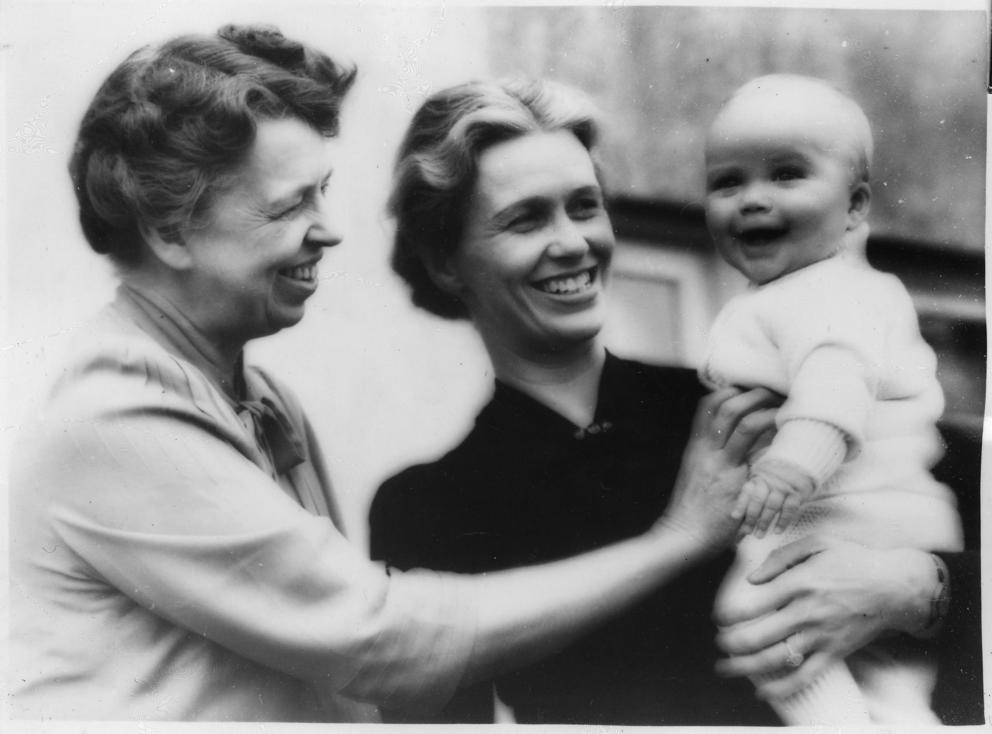 Eleanor Roosevelt, left, with daughter Anna and grandson John Boettiger in 1939, the year John was born in Seattle.

Her only daughter Anna and son-in-law John Boettiger lived and worked here, apparently for most of a decade, after he was appointed publisher of the Seattle Post-Intelligencer in the mid-1930s. With her husband sent here to lead the paper in the wake of a bitter 1936 newspaper strike, Anna served as the paper’s Women’s Page editor. A son, John, was born here in 1939.

Whenever in Seattle, Eleanor used the P-I’s offices to write “My Day,” her daily newspaper column, distributed to newspapers across the country. She also worked here, as she did around the nation, to further the work of the American Association for the United Nations.

Eleanor’s surprising connections to Seattle were the highlight of a recent evening at the Ruins supper club.  The feature was a showing of a documentary, Remembering Eleanor Roosevelt, an hour-long interview with Seattleite Pat Baillargeon. Herself a fascinating story, Baillargeon served as Eleanor’s secretary and special assistant for seven and a half years (1953-60) when the First Lady was on her own, following the death of President Roosevelt.

Interviewed in the documentary by the Discovery Institute’s Bruce Chapman, Baillargeon told how she had graduated college with a political science degree in the 1950s. She then went looking for work in Washington, D.C., only to find the job she sought frozen. Instead she was offered a temporary job (soon made permanent) as Eleanor’s special assistant. The former First Lady, a United Nations delegate, lost that post under the Republican administration of Dwight Eisenhower, who took office in ’53. But Eleanor, never daunted, became an unpaid volunteer for the American Association for the United Nations, promoting human rights and world peace.

Pat recalls, “We had a small office in New York City with two desks pulled together. Each day Mrs. Roosevelt fielded great stacks of mail.” Every piece of mail was answered. Eleanor usually jotted one or two words across each letter and passed it along to a younger secretary. On occasion, Eleanor would dictate a more detailed response directly to Pat.

The two traveled extensively, visiting every state, some more than once, and often to Seattle. Pat told the story of how, when headed to her hometown, she would carry portable typewriter along with her tennis racket. There were also international trips. Sometimes Eleanor went totally alone, sometimes with Pat, always without security, to Europe, Asia and Israel.  The former First Lady refused any special benefits, aside from a franking privilege for official correspondence. However, she paid postage when she handwrote many letters to her family, including “the boys,” as she called her sons into their 50s.

Pat remembers one occasion when the two had just checked into a Midwestern hotel. Pat responded to a knock at the door. There loomed a tall man who filled the doorway and identified himself as “security.” Completely unimpressed by the concern for her, Roosevelt said, “Tell him to go away.”

Wherever they went, Eleanor gave speeches, interviews and met local leaders. Each weekday, she somehow found time to write “My Day,” filled with news of her travels and comments on current issues.

“She wrote about everything,” Pat says. “She would dictate the column and, afterwards, check it for errors.” Pat’s job then was to call the column into Western Union for distribution across the nation. Eleanor received no pay for speeches or columns, but proudly accepted membership in the American Newspaper Guild.

“Mrs. Roosevelt was ahead of her contemporaries on civil rights, human rights and the rights of African-Americans,” recalls Pat. “She flatly refused to speak to segregated audiences even in the South, insisting her speeches be open to all.”

There were times when Mrs. Roosevelt was treated harshly by the press, but she shrugged aside insults saying, “Oh, that happens.” In their years together, Pat never once heard Eleanor raise her voice. Pat says, “She was clear and outspoken but never petty.” When they began work in 1953, there were 30 American Association for the United Nations chapters. When Pat left to return home, there were 200, a remarkable testament to Mrs. Roosevelt’s work.

Following the documentary showing, Pat, now in her late 80s, stood for almost an hour, ramrod straight and elegantly dressed, answering questions from the audience at the Ruins.  She was asked about her later years. She said she had first done consulting work, then served as protocol director for the 1962 World Fair and ran the city’s Open Housing Campaign to ban racial discrimination in real estate sales and rentals. (The measure failed but was later passed by the Seattle City Council.) Pat’s later career involved work with the Port of Seattle and the state promoting trade. She was a founding member of the Wing Luke Museum and served on the board of he Burke Museum.

Pat Baillargeon’s mostly untold history, now recorded during the hour-long interview with Chapman, is a rare opportunity to once again celebrate First Lady Eleanor Roosevelt, one of this nation’s most extraordinary women, and her links to Seattle — as well as the nation and the world.

This story has been updated to correct an editing error in the description of the Open Housing Campaign.