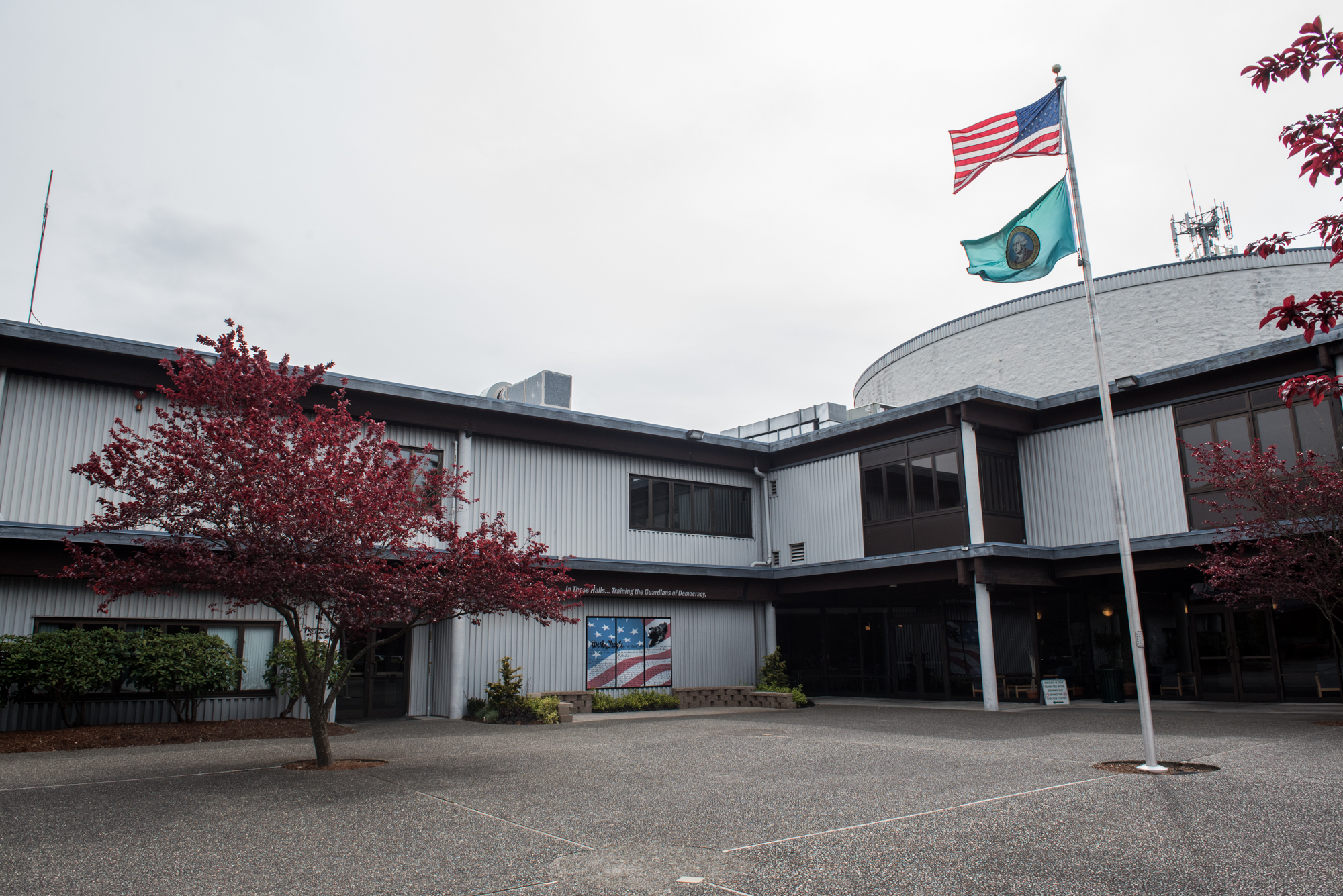 Space is in short supply at the Washington State Criminal Justice Training Commission.

A long delayed audit of the Seattle Police Department has confirmed what many in the city already suspected: The department is understaffed. In this, Seattle is not alone. Departments across Washington State — both rural and urban — are scrambling to fill the ranks of their forces. It’s a game of catch-up decades in the making.

And as the staffing epidemic is a statewide issue, so is the bottleneck at the Washington State Criminal Justice Training Commission (“the Academy”) in Burien, where every recruit in the state must train before moving onto his or her department. Just in the last two years, the number of recruits cycling through its doors has doubled, filling its cramped halls and dorm rooms to capacity and pushing the wait time to enter the Academy to between four and six months.

That bottleneck could get worse if the State Legislature doesn’t approve supplemental funding in the coming days or weeks. As a general rule, the Academy receives state funding for nine classes of 30 recruits a year. But in the face of mass hiring, that number won’t cut it. “The Budget was based on previous years where the rate of hiring was a lot lower,” says Executive Director of the Academy Sue Rahr last week over the phone.

Last year, the Legislature approved enough funding for 14 classes between July 2015 and July 2016. But Rahr has spent long hours on the phone and in Olympia recently in an effort to secure funds for two more classes. She’s depending on it. If her efforts aren’t successful, the Academy will have to tell two classes worth of recruits to wait longer.

The House has included the funding; the Senate has not.

More daunting is what’s coming around the corner. “What we’re facing next year is, we’ve only been funded for about half the number of classes we need to host in order to keep up with demand,” says Rahr. Without that additional funding, the wait time could stretch to as much as ten months.

Combined with the nine months of training, recruits would be looking at more than a year and a half from hiring to working.

Rahr says she can’t think of a single agency that is not struggling with hiring. How did so many departments get here? Broadly, the reasons are twofold.

Police and fire departments hired a ton of people coming back from WWII. But people who are hired together tend to retire together. So when the class of the ‘50s began retiring in the ‘80s, departments went on another mass hiring spree.

Unfortunately, as those officers and firefighters began retiring in the years prior to  2010, the country was hit with the Great Recession. As department budgets were cut, vacancies went unfilled. Now, as cities’ coffers are re-filled, everyone wants to hire at the same time.

The Seattle Police Department has suspected it’s understaffed since as early as 2000. But between the tech bubble popping and then the housing bubble, it never got the chance to grow.

The issue of staffing has been thrust into the spotlight lately thanks in large part to the city’s exploding population. Just about every neighborhood – from White Center to Northgate – has complained of slow response times and a lack of patrol. Those perceptions were amplified tenfold by the very vocal neighborhood groups in Magnolia and Queen Anne, who are reacting in part to the city’s growing homeless population and slow response times to low-priority crimes.

The audit of the police department — which came in about six months late — recommended hiring between 143 and 175 officers to get response times down to their proper level. Conveniently, Mayor Ed Murray last month revised his hiring goal to 200 officers by 2020, up from 100 by the end of his first term. Murray spokesperson Viet Shelton said the revision was not in reaction to the audit, although the city received early drafts last November, which suggested nearly 170 new officers.

Every year, between 50 and 60 officers leave the department. In order to grow the department, SPD needs to hire between 75 and 80 recruits a year. As the largest police department in the state, SPD has an agreement with the Academy to reserve seven spots in every class. But if the Academy is only funded for nine classes in coming years, that’s only 63 officers a year — well below what the department needs to meet Mayor Murray’s goal.

Lurking in the background of this conversation is another, equally important question: With such demand, will the quality of officers drop? Over e-mail, King County Sheriff John Urquhart says no, he hasn’t seen a drop in standards. But Rahr doesn’t rule it out: “I certainly think that possibility is there…. It’s kind of a pragmatic thing: You’ve got 20 vacancies in the field and you’ve got to fill them. So there is tremendous pressure to hire people.”

“On the other side of that, recruits do have to get through the academy,” Rahr says. “They still have to go through all the processes before they’re actually hired.” On that front, she hasn’t seen tremendous difference.

The real long-term solution would be to hire steadily, even through economic downturns, to eliminate the ebbs and flow of hiring and attrition. But, in the meantime, mayors across the state are phoning into Olympia, begging for a shot of adrenaline to the restricted airwaves of the academy.