Behind Jay Inslee's most radical move 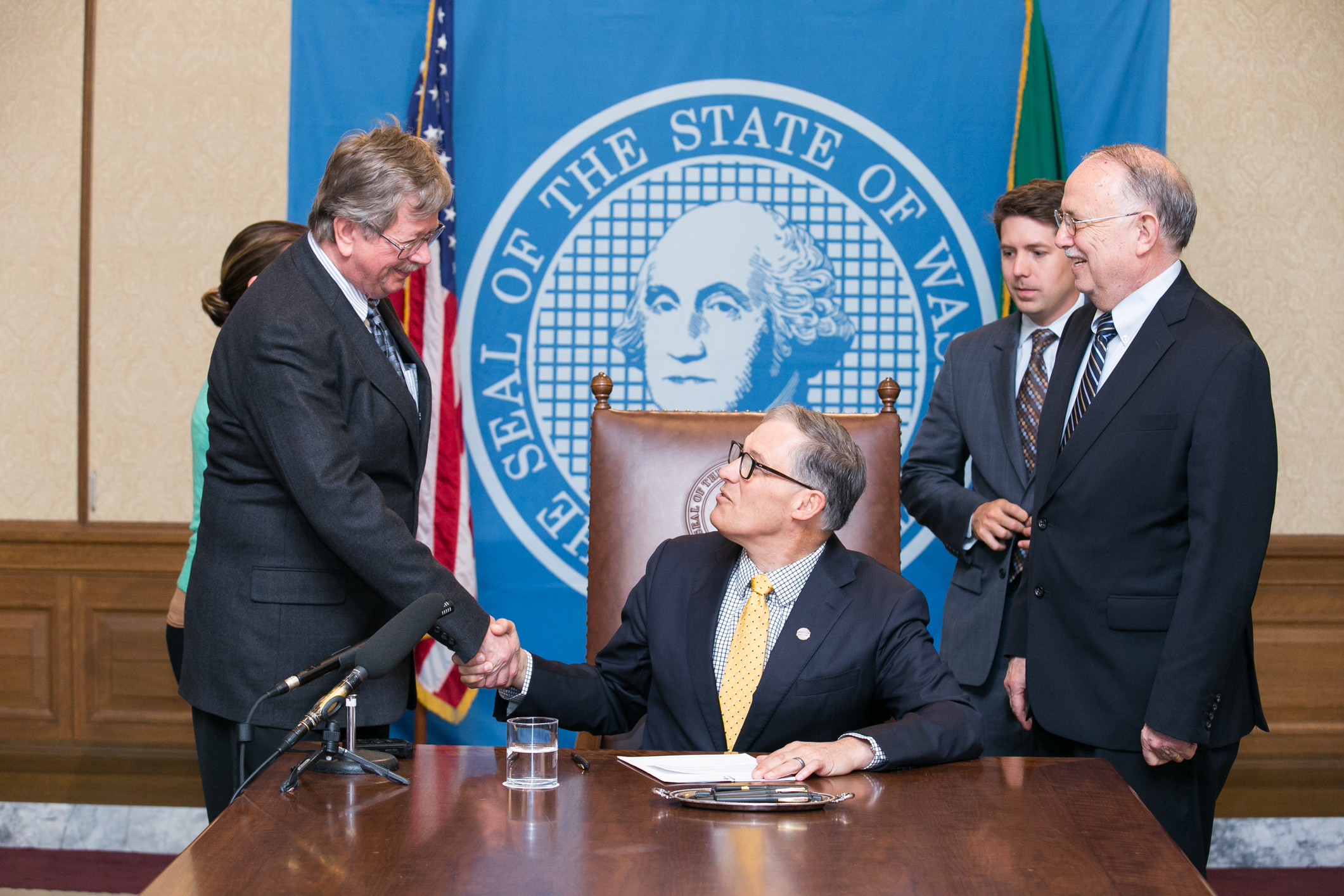 Gov. Jay Inslee signs a bill into law in 2015. After his mass veto, he'll be doing significantly less of that this year.

When Gov. Jay Inslee vetoed 27 bills last week, he partially made good on his threat to hold up the entire legislative process until lawmakers sent him a budget. But in so doing, he may have brought fresh attention to questions about his own leadership.

As legislators return to Olympia Monday to work on writing a budget in what they hope will be a brief special session, the governor's action will echo through the state Capitol.

In a dramatic 10:30 p.m. press conference on Thursday, the last day of the regular 2016 session, Inslee cited legislative inaction on the budget as his motivation for vetoing 27 of 37 bills that had been sent to him earlier in the session. The bills included measures on hemp production, affordable housing and health care. Inslee said he had only let the other 10 get by because they related to law enforcement and public health and safety.

The point of the move, Inslee said, was to break the Legislature of what is becoming a habit of going into drawn-out special sessions over budget issues.

Brenda Erickson, a senior research analyst with the National Conference of State Legislatures, said that using a blanket veto to force legislative action is uncommon, but not unheard of.

Erickson said she knew of only two other recent instances when governors had used similar blanket veto threats to force action by state legislatures. In one West Coast incidence six years ago, then-Gov. Arnold Schwarzenegger threatened to veto hundreds of bills passed by the California legislature but relented after winning some concessions.

Inslee in his Thursday night announcement said he thought the move was probably unprecedented in state history. The veto strategy inevitably presents a certain appeal to governors, Erickson said, because it provides one of the few ways governors can have an immediate and definite effect on legislatures from which they are otherwise relatively insulated. But using vetoes as a blunt instrument comes with its own risks, too, she said.

"It's like any type of pressure that you put on, you have to be very careful how much and where," Erickson said. "Too much pressure can be counterproductive."

Trying to put out a budget, Erickson said, legislators are inevitably trying to balance the demand for services that governments have historically provided with the an equally universal demand for minimizing taxation. "They're weighing the core values of a state against each other," she said. "That's difficult and it takes time."

In Washington's case, lawmakers have needed special sessions to work out their differences in six of the past seven years. And this year, when they only have to update the two-year budget passed last year, there was optimism at the start about finishing on time.

Most of the bills Inslee vetoed seem likely to be re-passed after lawmakers settle the budget, and Inslee said he was open to that — but Republicans nonetheless accused the Democratic governor of having ulterior motives.

Calling the vetoed measures "worthy bills," Inslee said that when legislators finally send him a budget this year, he'd be open to signing the bills if they were put before him again.

At the end of the week, the working assumption at the Legislature seemed to be that re-passing the bills would be a relatively straightforward matter. Echoing statements they made the day before, when the vetoes were still just a threat, leaders of the Democratic-controlled House said that they weren't concerned about re-passing the bills.

Since the vetoes, some legislators have also complained that the actions showed a lack of faith in the Legislature, and will be counterproductive in the long run.

In an emailed statement Friday, Sen. Mark Miloscia, R-Federal Way, called the vetoes "a vain effort to punish legislators," and said they would hurt people who were waiting for changes to be enacted by the Legislature, or for funding to be delivered to programs they depend on. One of the bills Inslee vetoed was a Miloscia-sponsored measure, SB6342, to direct $72 million in unused funds from a state bond program to affordable housing. The bill had received strong bipartisan support in both the House and the Senate.

Another question is how Inslee's move plays into upcoming elections. Throughout the legislative session, Republicans in the state Senate have been steadily building a narrative portraying Inslee as an ineffective manager, regularly taking time during weekly press conferences to sharply criticize his oversight of the state transportation and corrections agencies. When Senate Republicans abruptly and dramatically fired the head of the former agency, some capital-watchers even questioned whether the maneuver might not be at least partly a gambit to reinforce the image of a governor so bumbling as to require intervention.

As one of the most dramatically confrontational moves his tenure so far, and coming just as election-year politics are beginning to heat up, Inslee's veto move could contradict that portrayal of him as ineffective. Whatever the motives, the veto will likely be used in the governor's campaign this fall for a second term.

Bill Bryant, a Republican running for governor, said he thought the moves amounted to a "political stunt."

"The governor has introduced a very hyperpartisan, divisive style at a time when he ought to be pulling people together," Bryant said.

Chopp also said he saw the governor's move as a sincere attempt to push the Legislature toward action. "I don't think it was gamesmanship at all," he said.

Asked why he thought Inslee chose to make such a dramatic stand over a supplemental budget in an election year — but not last year, when the Legislature was trying to make progress on the McCleary schools-funding mandate — Chopp said that the move wasn't necessary then because the Legislature did make real progress on school funding without it.

Asked at the end of the week whether the governor was concerned about the move souring his relationship with the Legislature, staff in Inslee's press office gave no ground.

"As frustrated or unhappy as legislators might be," a spokesperson wrote in an email, "the people they serve are equally frustrated and unhappy at legislators' perpetual inability to finish their most basic task on time."