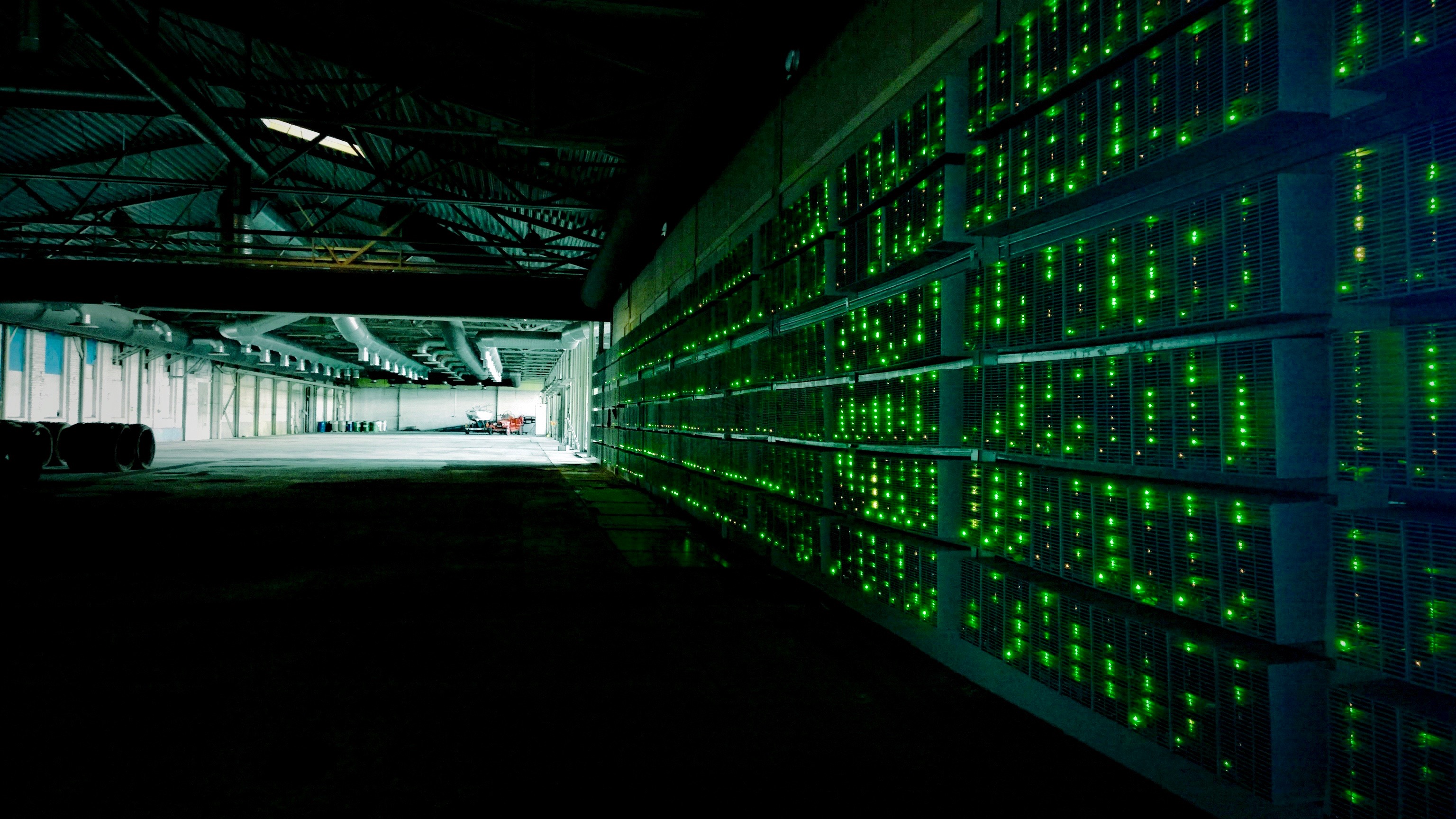 Bitcoin mining can be done at home but large servers have increasing advantages.

Most of the Pacific Northwest’s power comes from hydroelectricity. Central Washington counties like Chelan –well-positioned to tap the powerful Columbia River cutting through it – enjoy some of the cheapest power in the nation. While that has been quietly celebrated by locals and occasionally criticized by private power enthusiasts, it has gained new attention from a part of the tech world.

The bitcoin industry, which uses lots of power, has noticed.

Chelan County, which includes Wenatchee, has become a bit of a magnet for bitcoin miners, who are a key element in the cybercurrency system. Mostly outsiders, they see an opportunity to maximize profits by powering their massive, algorithm-busting server farms at a low cost — potentially creating jobs locally, the entrepreneurs say.

Still, the prospect has provoked concern. Fearing damage to the economics of a low-cost power system built on the operation of three dams, the Chelan County Public Utility District is looking at raising prices on power for the miners.

Bitcoin is a decentralized, digital-only currency created by a network of miners who maintain the essential records of transactions and can issue new units of currency  bitcoins — by solving complex, ever-more-difficult equations that require huge amounts of computing power. The currency can be sold for cash or used in online transactions; this month, the value of one bitcoin has fluctuated between about $360 and $400.

“It becomes a race essentially for computing power,” said Daniel Conover, a bitcoin miner from Seattle who operates a mining facility in Chelan County. “Recently, because the market’s got so big, it’s become a race for energy efficiency.”

Conover is founder and chief operating officer of Hash the Planet, a Kirkland-based company that provides space and software to bitcoin miners and set up operations in a warehouse in the Chelan County town of Cashmere to take advantage of central Washington’s cheap power.

The PUD boasts that Chelan County’s average electrical rates for residential users are the fourth lowest in the country, which is in large part because the sale of power from its dams to other utilities in the state and the West has allowed cheap sales at home. Over a year ago, the Chelan County Public Utilities District (PUD) started receiving unexpected applications for huge amounts of power. In December 2014, the PUD preemptively put a freeze on any new requests that would go over one average megawatt of power — enough electricity to power 417 homes, according to the PUD.

“We were seeing requests for anything from two to 50 megawatts,” said John Stoll, managing director of customer utilities for Chelan County. “We wanted to understand what was going on.”

Doing research during the moratorium, officials determined bitcoin miners were behind some of the requests. Bitcoin mining doesn’t just require large amounts of power; it also uses an unusually high intensity of energy per square foot of building space. This is part of what gave the miners away. According to Stoll, the average house in Chelan County uses 10 kilowatts hours of electricity per square foot. The PUD was receiving requests for 250 kilowatt hours and above.

“Once you get up into 250, you can visualize that’s a lot of power,” said Stoll. “Anything above 250 kilowatt hours, that was a pretty unique characteristic.”

Six months into the freeze on requests, the PUD proposed raising the prices on electricity for high density power users, such as bitcoin miners, from around 3 cents per kilowatt hour to 5 cents. Otherwise, they believed, they would have to raise power for other users. Then last December, the PUD lifted the moratorium on energy requests for everyone except these high-density power users.

The PUD has decided to keep the high-density moratorium in place until Oct. 3 this year. On March 21, the PUD commissioners will look at different options for power rate structures. They plan to make a decision on whether to raise the power on high density power users in June.

“With the rate increase, we couldn’t survive,” said Conover.

“That’s very heavy weighing on me,” said Sean Cooper, CEO of Hash the Planet. “I have three kids, I can’t afford to go bankrupt.”

According to Conover, it’s possible to mine bitcoins almost anywhere in the country — at least, on a small scale. But running a hosting facility for other bitcoin miners, as Hash the Planet does, is a different matter. “For a hosting facility you need the ultra low rates because you have the overhead.”

Conover and Cooper’s business provides free installation, cooling, constant monitoring and CCTV access, and detailed monthly reports to its bitcoin mining customers. This is in addition to the rent, costs of hardware and maintenance. And of course, power costs.

Though Conover and Cooper are bitcoin enthusiasts themselves — Conover said he buys $100 of bitcoin every month — they are investors in a business, and a high-risk business at that. Conover and Cooper have considered moving to Moses Lake in Grant County, or even farther afield.

“Iceland, Greenland, they’re begging us to come,” said Cooper. Iceland offers similar power rates, along with tax breaks and incentives, he said. Plus, the usually low temperatures there hold down the costs of cooling high-powered computers.

But they don’t want to move, and they believe they’re contributing to Chelan County. “I’m pouring money into the community, hand over fist,” said Conover. “We’re productive members of the community out here.”

Cooper and Conover feel blindsided by the PUD’s actions. They had successfully applied for 1.99 megawatts and set up their servers for mining, only to see a proposed raising of price.

They have concluded the PUD must just not like the bitcoin industry.

This isn’t true, according to Stoll, who said the PUD is “agnostic” about bitcoins. “It’s nothing against this type of industry. This type of energy usage is unique to what we’ve seen in the past,” he said. “We want to meet the power requirements, but we want to meet it for everyone in the county.”

Stoll points out that even a rate increase of 5 cents per kilowatt hour would be fairly low, nationally. “It would be pretty tough to find a lower rate than that,” he said. “It’s still a relatively attractive rate, but that’s just my perspective.”

Bitcoin miners have advocated for a solution in which they would pay a slightly lower rate of 3.99 cents per kilowatt hour in exchange for bearing the brunt of upfront costs of setting up electricity. The PUD says it is trying to strike a delicate balance between power production, delivery and customer costs.

Malachi Salcido occupies a unique position in the debate. He owns the Salcido Connection, which like Hash the Planet is a business that provides space for bitcoin mining. He’s also a longtime community member and businessman in Wenatchee.

Salcido thinks the PUD overreacted with its moratorium on new power requests, perhaps based on fear of the unknown — and, despite Japan's thinking of recognizing bitcoin as a legal currency, it remains a bit mysterious to most people. “There are some bad actors in the bitcoin world. We don’t smear the technology.”

At a Feb. 3 public hearing in Wenatchee, Salcido gave a presentation arguing that high-density power users like bitcoin miners could help regional economic growth. How? Bitcoin miners are just one example of intellectual capital that he believes the region needs to attract.

“You need people with brains and innovative juices flowing, young entrepreneurs who are going to figure out the next big thing,” he said. “We can become one of the successful emerging technology hubs of the United States. It’s already happening. It just doesn’t look quite like you think it would. It’s a little messy. It’s emerging technology.”

Salcido believes it’s up to the PUD to come up with a solution that works for everyone — though he doesn’t know exactly what it would be. He himself hopes that even if power rates are raised, existing businesses like his can be exempt. Otherwise, he fears he will be forced to liquidate the two Chelan County data centers his company has invested millions of dollars into, and enter into a legal battle with the utility over their actions, which he sees as discriminatory.

Even with the 5 cents per kilowatt hour rate, the PUD's Stoll believes, the county’s economic growth would not be stalled.

The PUD and the bitcoin advocates all say they want what’s best for Chelan County. The problem is, what the PUD believes is best for protecting existing residents — the rate increase for high-density power users — just might drive away the bitcoin miners. And if Salcido is right, it could also drive away the region’s shot at technology-driven economic growth.