City picks up, clears out Nickelsville 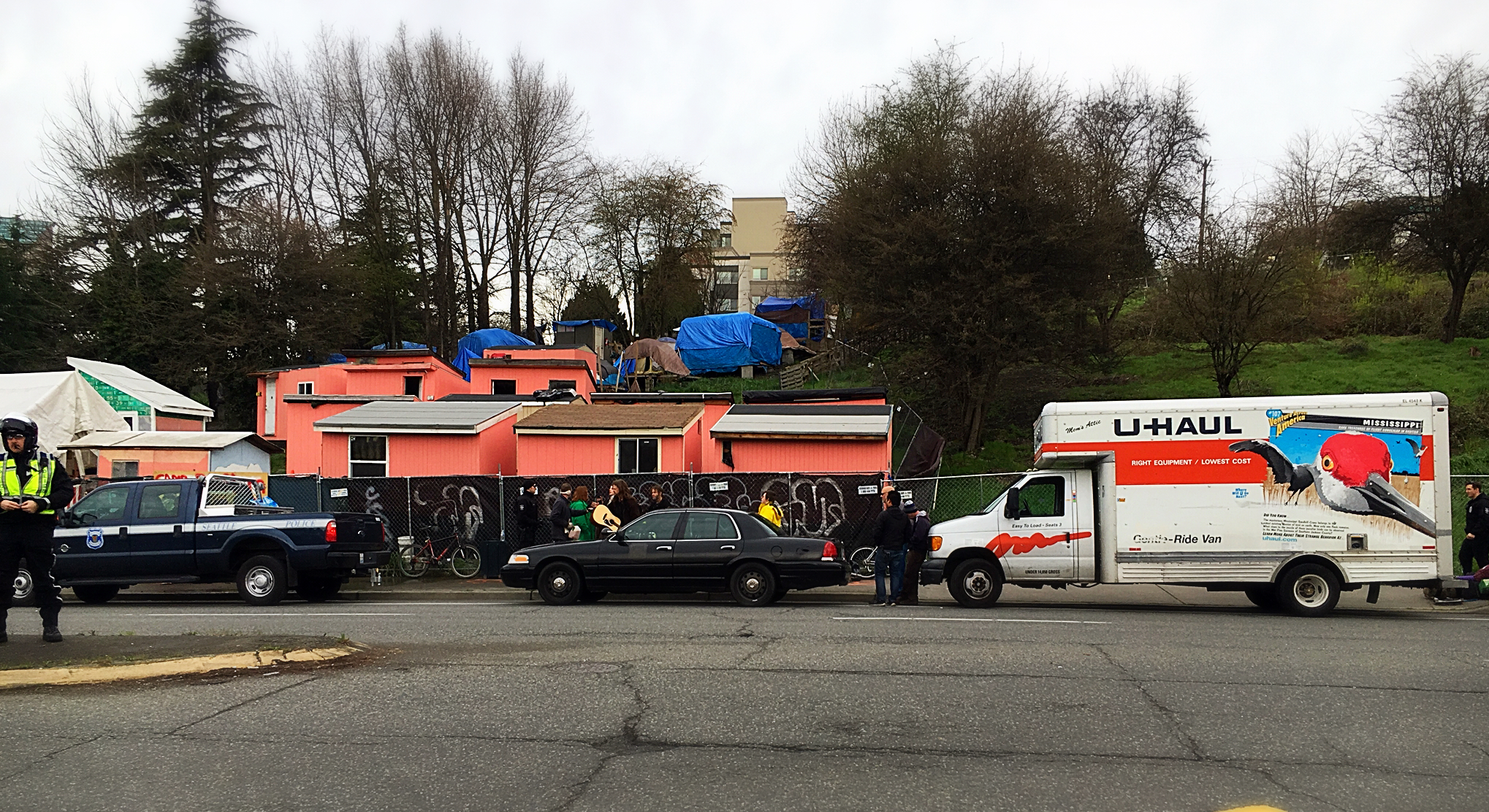 The City cleared out Nickelsville, the long sanctioned homeless encampment off Dearborn, Friday

“Everything’s a little messy,” says Sharon Lee of the Low Income Housing Institute (LIHI). Feet from where she stands on Dearborn Street, in the shadow of I-5 which rumbles overhead, a swarm of police and U-Hauls clear out the homeless encampment known as Nickelsville. It is indeed a messy situation, pitting those either obligated or motivated to clear the lot –making good on the promise of a month ago – and those shouting over rush hour traffic that the city and LIHI are cracking the wrong whip to solve homelessness. Lee calls it “progress”; others, inhumane.

The Nickelsville encampment housed roughly 50 people in a series of tiny pink homes and tents, on the slopes of a hill just south of the International District. It became a staple image for anyone driving on and off the interstate. The city has allowed the encampment to exist by way of a law passed in 2011, allowing religious entities to host encampments without permits or time limits.

After roaming from place to place in Seattle for a time, Nickelsville settled into its current location in September 2014, thanks to a partnership with Coho Real Estate, which donated the vacant lot to Good Shepherd Lutheran church. LIHI, a non-profit, has provided financial backing as well as case management.

The hitch was that Good Shepherd and LIHI made a deep commitment to Scott Morrow, the controversial manager of Nickelsville. On Friday, Lee described Morrow as the “enforcer,” the man who made sure residents followed the rules of sobriety and other codes of conduct.

But in early February, Nickelsville residents voted to sever ties with Morrow and operate independently, the second time they’ve done so in the last two years. The decision rattled Good Shepherd and subsequently Coho Real Estate. On Feb. 13, residents of Nickelsville were told to reconsider their partnership with Morrow or move out by Feb. 20. Unlike the first vote in February 2015, the residents stuck to their decision.

The oppositional vote was organized by a disgruntled employee, Lee said, who was hired by Morrow to run security in Nickelsville and other encampments. Lee said this employee was recently fired “for cause" and retaliated by rallying residents against Morrow. When asked if she thought Morrow would still be in power if not for this one employee, Lee said yes.

But among residents at Nickelsville, tensions have long run high with Morrow. In 2013, a Seattle Times article revealed accusations that he forced residents to gather signatures outside City Hall, with punishment if people declined.

Additionally, last year’s vote to ditch Morrow was not organized by the disgruntled employee. On Friday, a number of people expressed negative views toward Morrow.

“A lot of people didn’t like him,” said one man in a black hooded sweatshirt, sitting against a column supporting I-5 overhead. He declined to have his name published, but said he’d come up to Seattle from California in 2014, and had been living in his car until moving into Nickelsville three months ago. He said that he didn’t know Morrow well, but described a sentiment within the encampment that he was greedy, even profiting off the encampments. As if on cue, another man shouted “Scott Morrow’s a poverty pimp!”

None of these allegations of embezzlement have been verified, but the rift between Morrow and Nickelsville residents is real.

The model of Nickelsville is one of self-governance and self-regulation. While the City has shown a willingness to open encampments – such as new ones in Ballard and, most recently, Othello – it is not interested in bearing the sole burden of managing them. In an interview with Crosscut last month, Councilmember Sally Bagshaw said she wanted to launch an all-out effort to add 1,000 beds for the homeless in Seattle, many of them in tiny-homes like at Nickelsville. She used Nickelsville as an example for how some may be run.

But with Morrow’s ouster, the result of a democratic vote, the definition of self-governance at encampments is less clear. LIHI and Good Shepherd have pegged Morrow as their guy. “I’ll just tell you, the church and LIHI, we both have confidence (in him),” says Lee. “That’s why Nickelsville is still our partner in Othello and Ballard.”

Lee argues that encampments must show they can exist under a strong central governing structure, or future religious and real estate partners will get spooked. “I think it’s important that when the property owner and the church say it’s time to close, that’s respected,” she said. “Otherwise other churches won’t do the same thing and other property owners won’t offer if they think that the city’s not going to enforce trespassing.”

Meanwhile, the Nickelsville residents said they found a new non-profit other than LIHI they hoped to partner with, but weren’t given enough time to work out a deal.

By Friday, only about 16 people were left in Nickelsville, down from 50 at its fullest. Most had already left when the notice to vacate came. Some, like the man from California, simply ignored the notice, hoping to stay longer. Other, like Josh Elms of Arkansas, showed up in the last week, after most of the drama had simmered down.

Of those left, all were offered space in the newest Othello encampment. According to Lee, that space can hold up to 80 people. Only 20 live there currently. An adviser to Mayor Ed Murray, Scott Lindsay, said the U-Hauls would take people’s possessions to Othello. Elms, who got a knock on the door a half hour before the clearing began, said he’ll “go with the herd” and take them up on the offer. “In the sea of chaos, they threw me a life-preserver."

It's unclear where the people who left over the last month have gone. Lee said some have moved to the tiny-house village on 22nd and Union, but was unsure of the majority. According to Lindsay, outreach workers have been visiting Nickelsville nearly every work day since the notice to vacate was issued.

The man sitting beneath I-5, however, doesn’t remember that.

The sweep comes at a time of bitter divisions over what to do with the city's rising homeless population. The Mayor's office has scaled up encampment cleanups – or sweeps – arguing that the encampments are unsafe and the cleanups provide opportunities to connect people with services. His opponents say the sweeps ignore the reality of services available and people's willingness to accept them.