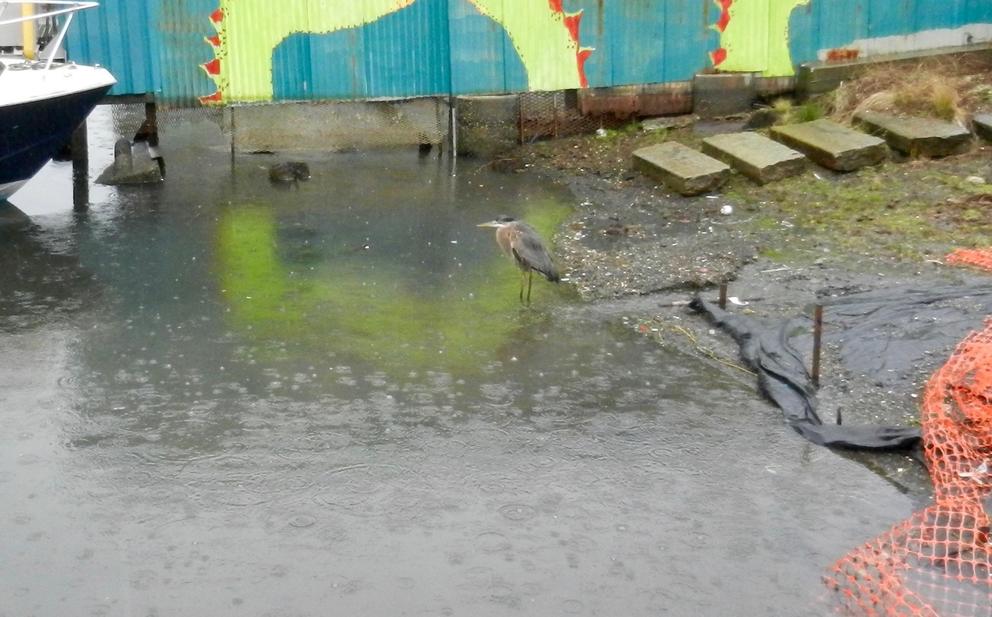 Urban areas around the Puget Sound region can be tough neighborhoods for wildlife like this heron.

A blue heron wades on the shores of Seattle's Ship Canal in the pounding rain. Head lowered, eyes focused, it's ready to snag a fish. The bird's wild beauty stands out in this industrial landscape at the edge of the Ballard district, a hair's breath from a busy Seattle arterial.

Look more closely at the water, as Sue Joerger of the Puget Soundkeeper Alliance does in the course of her work, and you'll find what she calls “a classic dilemma” playing out for wild and marine creatures in Puget Sound waters everywhere: sporadic but at times uncontrolled pollution. The levels are generally low enough to allow wildlife to survive but high enough to pose real threats to others and keep the ecosystem from truly thriving.

Indeed, 44 years after the nation enacted the Clean Water Act — states and cities followed with their own anti-pollution laws — illegal levels of pollution are easy to observe. In fact, part of Joerger’s job as the Alliance’s field director is to look for the pollution that continues to hurt the Sound and its wildlife.

Peering through windshield wipers in pounding rain, she hops out of her truck when she senses something isn't right on the Ship Canal, the body of water that links Seattle's Lake Union with Elliott Bay. “There's a little oil sheen along the shore,” Joerger remarks, “a lot of turbid water, cigarette butts, plastic.”

Along with the oil sheen lapping on the shoreline, Joerger sees a trickle of raw sewage that seems to have seeped into the Ship Canal from combined sewer overflow.

A third of Seattle, like many U.S. cities, has old “combined” sewer pipes that carry both waste and storm water. Add storm run off, which washes oil, chemicals and contaminants of all kinds down streets into nearby waters, and you have Puget Sound's twin albatross and biggest water quality challenge. King County, along with cities and municipalities throughout Puget Sound, are responsible for correcting it under state and federal law.

For Joerger, the next stop on this rainy day is South Lake Union, a construction hot-spot. Kayak patrols reported “muddy waters.” Muddy water is considered a contaminant and is regulated under the Clean Water Act with municipal storm water permits and industry permits, which require the water to be managed or contained on site. Toxic metals bind to mud and sandy sediment and can suffocate invertebrate organisms that marine life rely on.

“So here's the outfall and there's a significant plume,” Joerger says, looking at a storm water pipe that empties into Lake Union. “I'm going to take photos of it and when we get back into the car I'll report it to the Seattle Public Utilities surface water complaint line.”

The South Lake Union basin has a “a bit of history,” says the utility's Eric Autry during a later interview. Finding the source is usually fairly simple, he says, you just go up the system and see where it leads. The utility's Spill Response Team traced the problem to WSDOT's North Access Project that will eventually connect Highway 99 tunnel's north entrance at Harrison Street to the existing roadway north of the Mercer Street bridge.

In 2015, Seattle Public Utilities Spill Response Team responded to 450 spills, up from 200 five years ago. Autry says spill reports vary widely, from “hey, my neighbor just dumped oil into the drain at the end of the street” to “I work for this company and every night at midnight we dump this material into the drain and I don't think we should be doing that.” The reports have intensified, in part, he says, because people know the utility will respond so they call.

They've also intensified because of the magnitude of the storm water problem, a huge spike in vehicles (many dripping oil), a growing population and inherent challenge in dealing with old combined sewer pipes that can overwhelm the system's ability to contain flows. The cell phone of King County's self-proclaimed “sewer queen,” Pam Elardo — aka director of the Wastewater Treatment Division — is telemetrically connected to all CSO potential overflow points. When an overflow happens she's the first to know. “At some point the flow of the sewage gets too high for the capacity of the combined pipes and it goes to relief points which discharge directly to receiving waters. You have to understand," says Elardo, "first of all we have a plan to reduce and eliminate those to the extent that we can, but they're still necessary. We can't just plug 'em up. If we did they'd back up into people's homes and businesses." In 2014, the most recent year data is available, weather conditions resulted in 388 untreated events discharging 1.1 billion gallons of waste into receiving waters and 60 treated events discharging 776 million gallons.

King County is under a federal consent decree to manage the problem and will have spent over $1 billion by 2030, the year the problem is expected to be under control. No federal money was made available, said Elardo.

Cities and counties are making headway, says Sandy Howard, water quality communications manager for the Department of Ecology, but “storm water is like the poster child for non-point source pollution. It's very difficult to put your finger on.”

In the field this particular day, Puget Soundkeeper's Joerger will inspect water bodies and sites from Seattle to Kent and back to Harbor Island, the artificial island south of downtown Seattle on the Duwamish River where it empties into Elliott Bay. Ecology is responsible for monitoring industrial storm water permits and pollution prevention plans from industries here, which include several petroleum tank farms. Last month, Soundkeeper, however, settled a citizen Clean Water Act against Rainier Petroleum. In a consent decree the company, which fuels the Washington State ferries, agreed to control previously errant runoff from its fueling pier and install a filtration system to treat all storm water from its Pier 15 facility.

Vacancies and an insufficient number of inspectors appear to be the reason why the Department of Ecology failed to cite Rainier Petroleum. But the Clean Water Act has, for a number of years, allowed for citizen complaints, like the one Puget Soundkeeper brought against Rainier. The non-profit does not gain financially from settlements of the Clean Water Act actions. In Rainier Petroleum's case, the company will pay $280,000 in lieu of penalty to third-party mitigation and restoration projects in Puget Sound.

Katelynn Kinn, staff attorney with Soundkeeper says the settlement is a “critical step towards reducing toxic industrial stormwater and preventing a major oil spill to Puget Sound addressing chief concerns for the recovery of endangered salmon and orca whales.” Rainier Petroleum will also be forced to comply with oil spill protection measures required by its state-issued permit including containment for its lube-oil tank farm on the Elliott Bay shoreline.

It’s a victory, but the long fight to create clean waters needs many more wins and  more support from the feds, say those struggling to address the problem, for the mandate of the Clean Water Act to be honored.