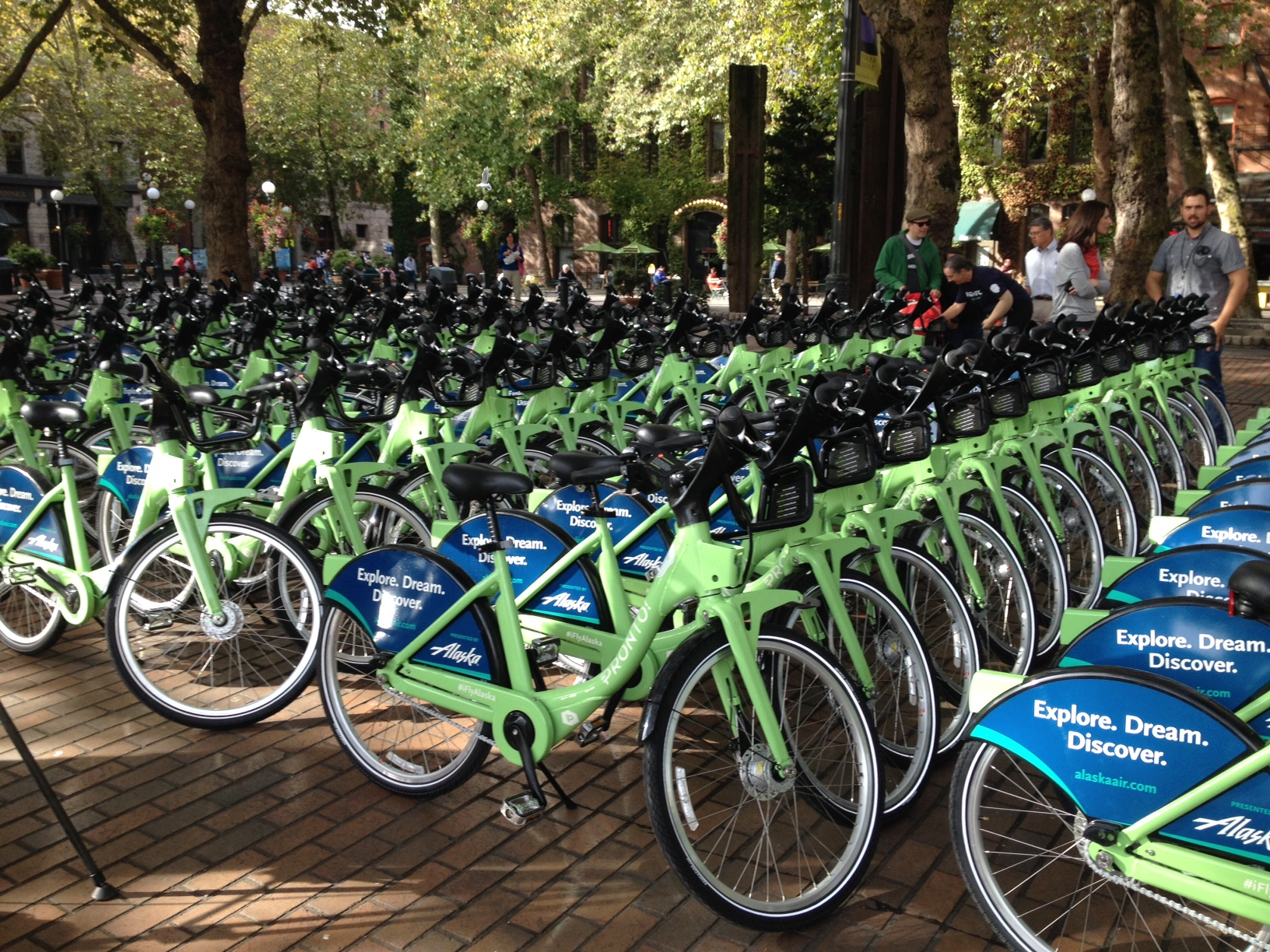 The money will come out of a $5 million pot already dedicated to Pronto in the 2016 budget. But that money was there to expand the program, not to provide stilts. So while support for Pronto as an idea persists in City Hall, there was little enthusiasm  to spend the money at all.

With the 7-2 vote to release $1.4 million, Pronto's ubiquitous green bikes of today – positioned in stations around the city – will continue to be the green bikes of tomorrow. The city will replace nonprofit Puget Sound Bike Share in overseeing the program's operations. In the meantime, the city will put out a request for proposal to other bike share providers to head-up a 2017 expansion. Motivate – the parent company that provides equipment and operations now – could be replaced. However, Councilmember Lisa Herbold, one of two council members opposed Monday, has argued Motivate will have an advantage in any bidding war, given it's already set up in Seattle.

Why the city needed to bail out the program is subject of some debate. For bike advocates in favor of Pronto, it’s that the city promised a takeover and expansion of the program back in May. As a result, Pronto board members and staff eased off searching for sponsorships and grants. But when the city delayed, the organization fell behind.

For the Seattle Department of Transportation, it's because city officials, like the department's Chief of Active Transportation Nicole Freedman, argued that initial ridership projections were too high. Therefore, the initial loan to get the program running was too high.

Further, the nature of the agreement with parent company Motivate leads the program to outsource most of its operations, rather than running them in-house like a small business. Freedman and others have argued that the program's monthly price tag became too much of a burden and Pronto never got out from under its loan.

SDOT and the bike world do generally agree, however, that ridership and revenue are actually not bad, and that without the $1.4 million debt over Pronto’s heads, it could break even.

But there is significant worry that the problem is not with the loan, but with the program's model itself. Councilmember Tim Burgess said Monday that trying to make Pronto work in its current form reflected an “optimism bias” — the city wants it to work so badly, it convinced itself this is a good idea.

Others, like former Washington Transportation Secretary Doug McDonald, have argued that the city should put the resources elsewhere.

“To me the issue is on prioritization,” McDonald said in public testimony. “The issue the council should be spending its time on is pedestrian safety, not bike share.”

Near universal though, is annoyance. SDOT Director Scott Kubly admitted in a committee meeting two weeks ago that his department caught whiffs of financial trouble as far back as May, but the council was not made aware of the depths of those troubles until January. “I really wish we weren’t in this position,” said Councilmember Mike O’Brien in that committee meeting.

The council members also chafed at the revelation, first reported by Publicola, that SDOT had already given Pronto $305,000 without the council’s knowledge.

While most of the council members got past the program's obvious financial issues, council members Herbold and Burgess teamed up on a proposal that would have let Pronto die. After paying back $1 million in grant money to the Federal Transit Administration, the remaining $4 million would have been used to start a new public-private partnership between the city and a bike share provider. The idea was that future failures would fall on the private company, not the city.

But that proposal failed and the council voted to write the check. That money comes with a few conditions: that protected bike lanes are expanded, that SDOT report on the program more regularly, and that the Mayor consult with the council before authorizing the rest of the money tagged for expansion.

No council members spoke too prosaically on Monday’s vote, perhaps a reflection of the uncertainty surrounding bike share in Seattle. Seattle’s supposed to be the city leading the pack on such programs. But in this case, it’s doing mop-up duty behind the other cities that didn't have such false starts.