How Inslee can change the script on climate issues 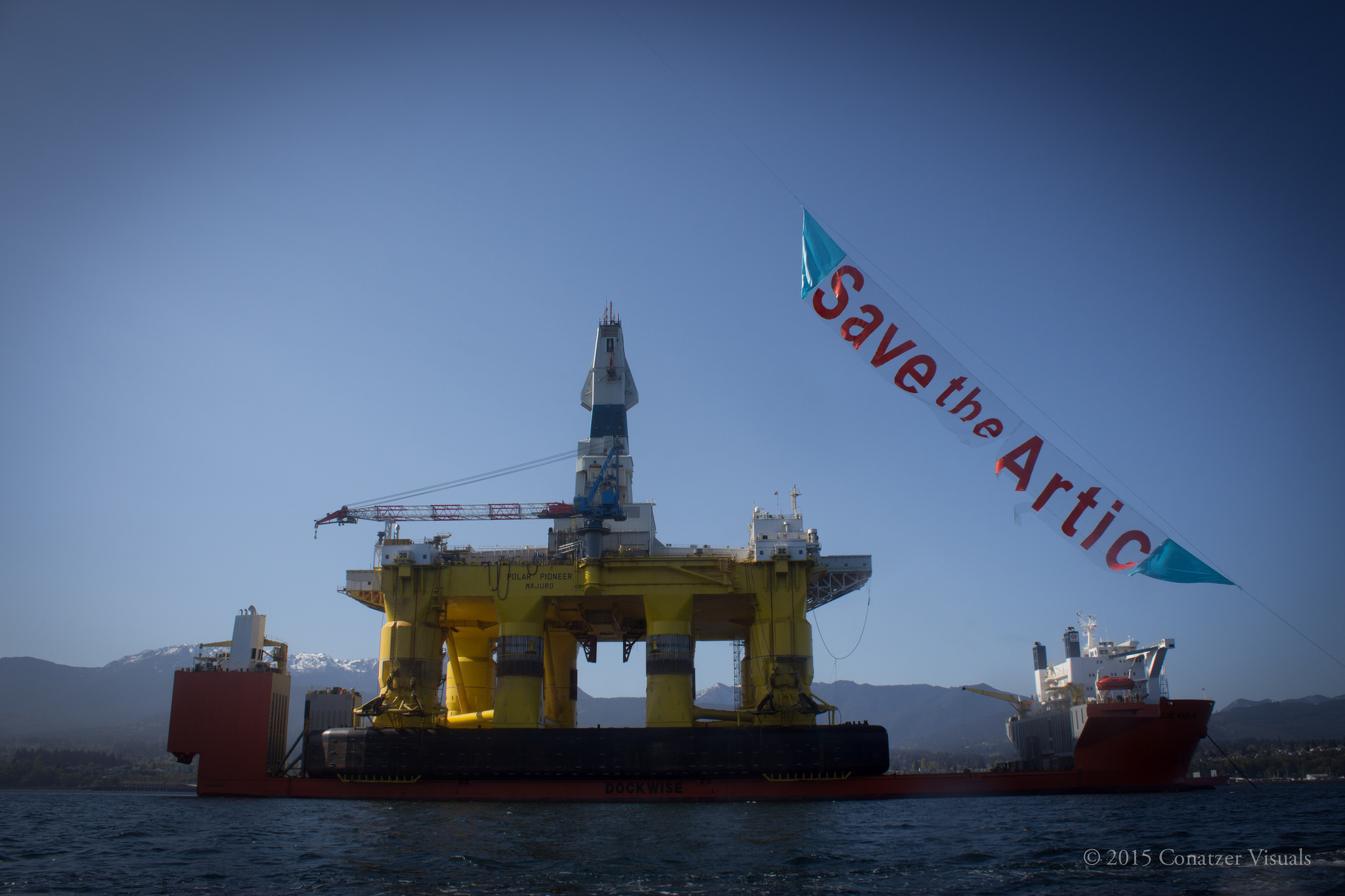 Activists protest offshore oil exploration in the Arctic beside a Shell drilling rig.

Governor Inslee came into office determined to make climate a priority. Instead he has faced a series of tough losses and retreats.

The Republican state Senate rebuffed his proposed cap and trade system. To get a highway bill (itself a loss for climate) he was forced to accept a ban on carbon fuel standards that could have reduced pollution from cars. And just two weeks ago he withdrew his Plan B, which was executive action to regulate carbon emissions. Business was putting on the pressure and apparently uncovering flaws in the proposal. He’ll bring it back, but it’s a worrisome development.

Republicans are now getting a two-fer on climate. They’re not just winning the policy fights. They’re also building the case that Inslee can’t get things done. It’s not fair, but that’s how obstructionism works.

There is, however, a way for Inslee to shift back to offense on climate, and it’s a way that reflects how the climate movement itself has evolved.

Inslee’s 2007 book “Apollo’s Fire” marked him as a serious thinker on climate. He pointed to advances in renewable energy technology and clean cars that could revolutionize our economy. To a great degree, history is bearing him out.

As reported in the Guardian: “The falling prices of renewables-generated electricity are pulling the rug out from under fossil fuels, which are getting priced out of the market.”  Similarly, analysts predict that electric cars will reach a tipping point in the next decade where they will out-compete gasoline driven cars.

But there is another side to the equation - not just promoting clean energy, but stopping dirty energy at the source. Bill McKibben’s influential 2012 article in Rolling Stone, “Global Warming’s Terrifying New Math” pointed to the necessity of leaving approximately 80% of known oil reserves in the ground to avoid the worst impacts of rising temperatures.  That article has revitalized climate activism.

As we’ve learned, technocratic solutions and glossy “climate action plans” have not been sufficient to stop the ongoing juggernaut of fossil fuel extraction. We see it right here in Washington with coal trains and oil trains heading to export facilities, and with a host of new ones proposed.  Even in deep green Seattle, politicians stood aside to facilitate Shell Oil’s Arctic drilling rigs.

If government continues to support fossil fuel infrastructure, we’re continuing de-facto subsidies for dumping carbon pollution into the atmosphere and delaying the alternatives we need. The activists understand exactly what we are up against. That’s why we saw hundreds kayaking against Shell’s drilling rig, protestors blocking oil trains, and Keystone pipeline opponents getting arrested at the White House.

And it’s not just activists. Philanthropies, universities, cities and individuals have divested over $3.4 trillion in assets from fossil fuel companies. In the Northwest, cities, counties and tribes have united to stop coal and oil trains. The “Keep it in the Ground” movement is the new face of climate advocacy.

So here are two simple ideas for Jay Inslee to reassert leadership and put himself at the forefront of the climate movement nationally, just as he once did with “Apollo’s Fire.” And the beauty is that he needs the legislature for neither.

This isn’t just moral leadership - it would also save us dollars in the short and long term. Coal is in a financial free fall, with consumption declining rapidly and major companies declaring bankruptcy.  Oil and gas companies have underperformed the market, and the recent drop in oil prices is hammering their balance sheets. The double whammy of increased regulation and cheaper alternatives puts their future performance at risk as well. Put simply, investing in fossil fuel companies and supporting their new infrastructure is a bad financial bet, not just terrible environmental policy.

Now these are not silver bullets to solve the climate crisis. Nothing is. It will take concerted action on multiple fronts to bring about the greenhouse gas reductions we need. But this is a front on which Inslee has been uncharacteristically reticent.

Some will say Inslee does not need to burnish his environmental credentials to win progressive voters.  His opponent Bill Bryant pushed through a backroom deal to facilitate Shell’s oil drilling rigs, was a major cheerleader for the deep bore tunnel fiasco, and jokes about dead polar bears. The environmental choice is clear to anyone who looks closely.

And that’s the issue in an election year, whether voters will look closely at climate issues. February was 29 degrees warmer than normal in parts of the Arctic. As Western Washington faces the warmest, rainiest winter in history, climate issues are a great way to draw attention to the dramatic contrast with his opponent. Inslee can help make the race about his priorities, not about the Republicans’ message.

By firmly aligning himself with the “Keep it in the Ground” movement, Inslee can assert the same leadership he demonstrated with his forward-thinking book. The kind of leadership that excites volunteers and activists to stump for him.  Most important, the kind of leadership we need in the face of the monumental challenge of runaway global warming.