How the Nazis charmed Seattle 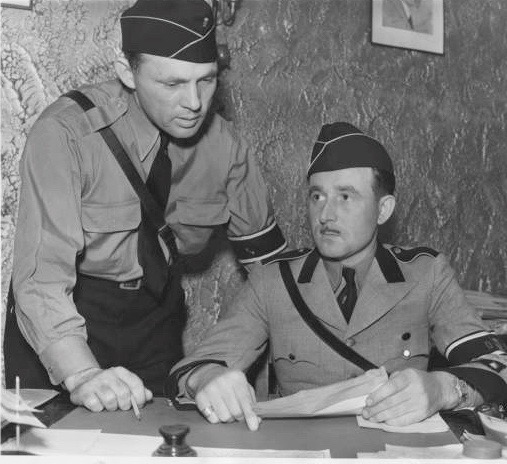 This is the second in a special series about the forgotten history of Nazis in the Northwest. Read Part 1 here.

“[B]e proud, all of you as before, of the beautiful old German flag of black-white-red and also the swastika of the Third Reich.”

-- from a speech welcoming German sailors on Capitol Hill, 1934

In 1933 and ’34, Seattle activists were taking notice of German consul Walther Reinhardt’s quiet PR campaign on Hitler’s behalf. Labor unions and leftwing groups, including Communists, had long been critical of Hitler and Mussolini’s fascism. Union and Jewish publications were pushing back against German propaganda, trying to correct impressions that the Nazis were somehow a benign force. Worries were going mainstream.

A prominent Protestant missionary, Sherwood Eddy, came to town to give a firsthand account of Jewish persecution that countered the German government’s narrative. Local clergy were also alarmed and speaking out

Early in 1934, Samuel R. Stern, a King County judge and former president of the Washington Bar Association, challenged Reinhardt to an open debate on German anti-Semitism, which Reinhardt denied existed. Some local Jews were afraid of speaking out for fear of stirring a local anti-Semitic backlash. Stern was not among them. Of German Jewish ancestry, he visited Germany later that year and described what he found there as “a real hell on earth.”

Reinhardt refused the judge’s proposal, however, saying he was “no Aimee [Semple] McPherson,” referring to the celebrity evangelist of the era. He said he “could not submit to being made a target” and that while he would personally like to debate, his government wouldn’t allow it. Reinhardt’s quiet approach and unchallenged lectures were considered more effective than direct public engagement.

In fact, the Nazi charm campaign was international in scope and began before Hitler came to power, as Germany sought to mend its international image after WWI. In Seattle, it seemed to work.

In 1932, the German Navy’s light cruiser Karlsruhe visited Seattle as part of a world tour and was greeted enthusiastically. The vessel returned to Puget Sound in 1934 on a second world tour, its first voyage under the Nazi flag, sailing into Tacoma in March. This time, there was some controversy over the visit. Activists passed out anti-German leaflets and argued that “Hitler’s ship” should not be allowed to land.

Yet the Germans did come into port and were generally well received. Reinhardt advised the crew to ignore the “communist” demonstrations. The captain of the Karlsruhe believed that Jewish agitators were stirring things up. And when one of the cruiser’s sailors, machinist’s mate Karl Lischke, died of food poisoning, he received a funeral with full military honors at Mt. View cemetery in Lakewood, led by Reinhardt in his diplomat’s formal top hat and swallow-tail coat, and attended by U.S. military personnel from Fort Lewis and the Puget Sound Navy Yard.

Later, about 110 sailors, officers and musicians from the ship were invited up to Seattle for speeches — their captain gave one at City Hall — and to put on a concert and dance at the Masonic Temple, now the Egyptian Theater, on Capitol Hill at Pine and Harvard.

One of the speakers at this so-called Marine Ball was a local attorney and prominent skier and sailor, Hans Otto Giese, a naturalized German immigrant who did legal work for the consulate and was a founder of the local chapter of Friends of New Germany, a group that opposed a Jewish-backed boycott of German commerce. (A few years later, the group changed its name and became known as the German American Bund.)

Giese gave a speech in German to the assembled audience in which he said, “The true face of the new Germany: They embody its athletically steeled youth. Now show yourselves to be worthy of your finally united German fatherland, support it whenever you can through word and deed, and be proud, all of you as before, of the beautiful old German flag of black-white-red and also the swastika of the Third Reich.”

Just as the orchestra began to play, a group of women protesters dropped anti-German leaflets on the crowd. It was reported that some of the angered sailors threw the women out of the Temple. Outside, several hundred “Communist” protesters had gathered. A squad of 30 police broke up the crowd and arrested three protesters, including a high school student and an African-American man allegedly carrying brass knuckles.

Reinhardt chose to downplay the incident. A Seattle Times story was headlined, “German Consul Not Perturbed By Red ‘Fuss.’” Reinhardt’s assessment, designed clearly to reduce the embarrassment, was to say the whole brouhaha was “more amusing and interesting than serious. It isn’t worth while to take official notice of it.”

Avoiding public “fusses” was important. In order to gain support from the German American community, the Reich was promoting German culture, staging talks and events showcasing the home country, cultivating business community ties and connections with decision-makers, and gathering intelligence.

By the end of 1934, Reinhardt had been transferred (he was later recalled from a station in Liverpool, England, when he was caught using his position to facilitate German espionage) and a new Reich representative, Dr. Gustav Reichel, another experienced diplomat, had arrived in Seattle to take his place.

Members of the Bund were deeply connected to Nazi Germany, in some cases taking direction from Berlin. They formed paramilitary groups—storm troopers—and attempted to “Americanize” the Nazi message by adopting an aggressive anti-Communist stance and pairing the swastika with the American flag. They were virulently anti-Semitic and at times useful tools of the Nazi government’s efforts in this country, though official connections with diplomats were commonly denied.

As a result of his subsequent activities, Schwinn later lost his citizenship, and was interned as an enemy alien during WWII and tried for treason. In 1934, however, his appearance was modestly introduced in a newspaper squib. Schwinn, it was said, “will bring a message from the younger generation.”

It would not be Schwinn’s last visit to Seattle. His presence was a sign that representatives of the Third Reich would soon have American supporters openly advocating its cause, arguing that Nazism was as American as apple pie.

And worse was yet to come. Reichel would soon have a new boss, a San Francisco consul general who was the very embodiment of the Nazi movement, a man infamous for thuggery and sadism before Hitler’s rise, a former Brown Shirt, an assassin, and later the implementer of the Final Solution in Romania. His name was Manfred von Killinger, and his arrival signaled a new, rougher phase of the Third Reich’s activities on the West Coast.

Next: Swastikas, thugs and spies