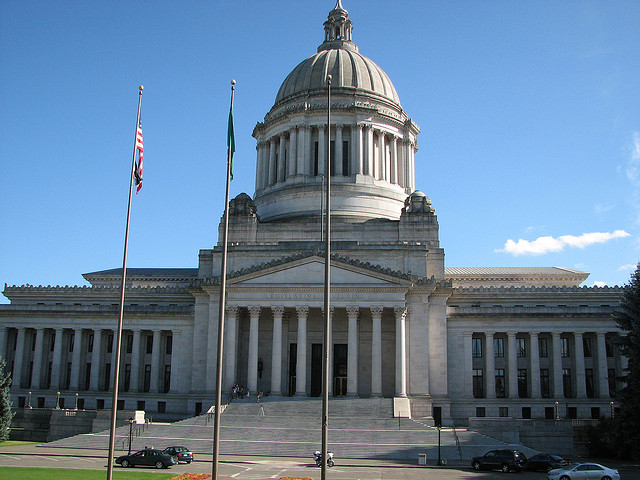 In the wings of the state Senate on Friday evening, a whisper came around: A long-stalled education bill would be brought to a vote.

A few minutes later, the Republican majority in the more-powerful of the state's two houses of government did just that, bringing HB 1541, widely known as the Opportunity Gap Act, to a vote and swift passage.  When news reached its sponsors in the Democrat-controlled House of Representatives, they visited the Senate to hug staff and fellow legislators. The bill had been stalled in the Senate for four years, and passing the body all but assured it would be signed into law by Gov. Jay Inslee.

But the development came in a day of mixed results for Democrats in the Legislature. With the passage of a key deadline at 5 p.m. Friday, getting policy bills to a vote will be significantly harder for the rest of the session. Of three bills that represented significant priorities for Democrats, one was passed with its central provision removed, and one was not even brought to a vote. Only the Opportunity Gap bill passed in anything near its original form, demonstrating that even with control of the House and the Governor’s Office, Democratic efforts can easily be blocked by Senate Republicans in Olympia.

1) The Opportunity Gap is a collection of proposals aimed at closing the academic achievement gap for minority students in the state. The proposals came from a bipartisan committee the Legislature itself established in 2012. One of those proposals — that schools be barred from expelling students for more than an academic term — had been a point of contention. Republicans repeatedly tried to strip the proviso from the bill, and stalled versions of the bill that contained the rule. The committee that authored the bill rejected that change, and so Republicans refused to bring the bill to a vote four years in a row. That changed Friday, when Republicans abruptly passed the measure.

2) A proposal to give the Department of Health authority to ban toxic chemicals used as flame retardants (HB 2545) didn't see the same success. Democrats in the House and Senate leadership have taken turns sponsoring this measure for five years now. Republicans brought it to a vote this year, but not before cutting out the Health Department’s rule making authority, which the bill's sponsor Rep. Kevin Van De Wege, D-Sequim, called the heart of the measure. Because chemical companies can get around bans on harmful chemicals by simply tweaking their formulas slightly without reducing the overall danger of a substance, sponsors argue the authority is necessary to let Health get ahead of the cycle, known as “the toxic treadmill,” without having to come back to the Legislature for new laws. With the rulemaking authority removed, the act consisted only of a list of five chemicals to be banned, and six more to be studied for harmful effects, for potential addition to a warning list.

3) And the Voting Rights Act, a measure the governor made a priority, has simply died — again. Versions of the bill sponsored this year by Rep. Luis Moscoso, D-Mountlake Terrace, and spearheaded by Sen. Pramila Jayapal, D-Seattle, had passed the House for four years in a row. The measure aims to ensure better representation of minorities in local governments, such as city councils and school boards. This year it made it further than it ever had, clearing Senate committees that often scuttle proposals to reach the floor, but Republicans ultimately didn't bring it to a vote, instead allowing it to expire with the 5 p.m. cutoff. Conservatives disagreed over a clause in the bill which would have created an avenue to get state courts involved if local jurisdictions refused to rectify voting districts that had been shown to be racially polarized. In a statement immediately after the vote, Inslee said he was "incredibly disappointed" the measure had failed.

Speculation had grown around the three bills in preceding weeks.

All had reputations as measures which, despite being important to Democrats, neither liberals in the House or the Senate could move, year after year. But as the legislative process moved forward last week and early this week, one by one the bills passed out of Republican-controlled committees where they had previously languished, until all were further than they had ever gotten before.

Republicans gave little explanation for what at the time appeared to be a change in attitude. Sen. Steve Litzow, R-Mercer Island, killed the Opportunity Gap bill in his committee last year, but this year moved it along without major changes. When asked about it, Litzow at first refused to comment, then would only say it was “a good bill.”

Republican leadership also seemed to send signals on Tuesday that their caucus had changed its position on the bills. Senate Majority Leader Sen. Mark Schoesler, R-Ritzville, told reporters that it had taken time to educate Republican legislators on the bills, and pledged that he wouldn’t “play games” by refusing to bring them to a vote.

As the end of the week neared, sponsors of the bills voiced cautious optimism, pointing to what seemed to be fresh progress on them — only to see two of the three effectively fail yet again.

Other Democratic policy proposals did move forward as the week wrapped up. Bills to provide funding for homeless students, to establish new oversight for Western State mental hospital, and take steps to address surging heroin abuse all had passed both houses Friday.

But the failure of the Voting Rights Act and the weakening of the Toxics measure seemed a repeat of what has become a familiar pattern in Olympia, where Republicans, thanks to disciplined leadership and a stalwart refusal to blink, use their Senate majority to effectively control what bills pass in the state.

The passage of Friday’s deadline, while symbolic, doesn’t entirely close off the potential for bills to become law. If legislators can muster enough support, nearly any measure can be brought to a vote almost until this coming Thursday, the day the Legislature adjourns.