Ride the Ducks just struck an elderly driver outside our office 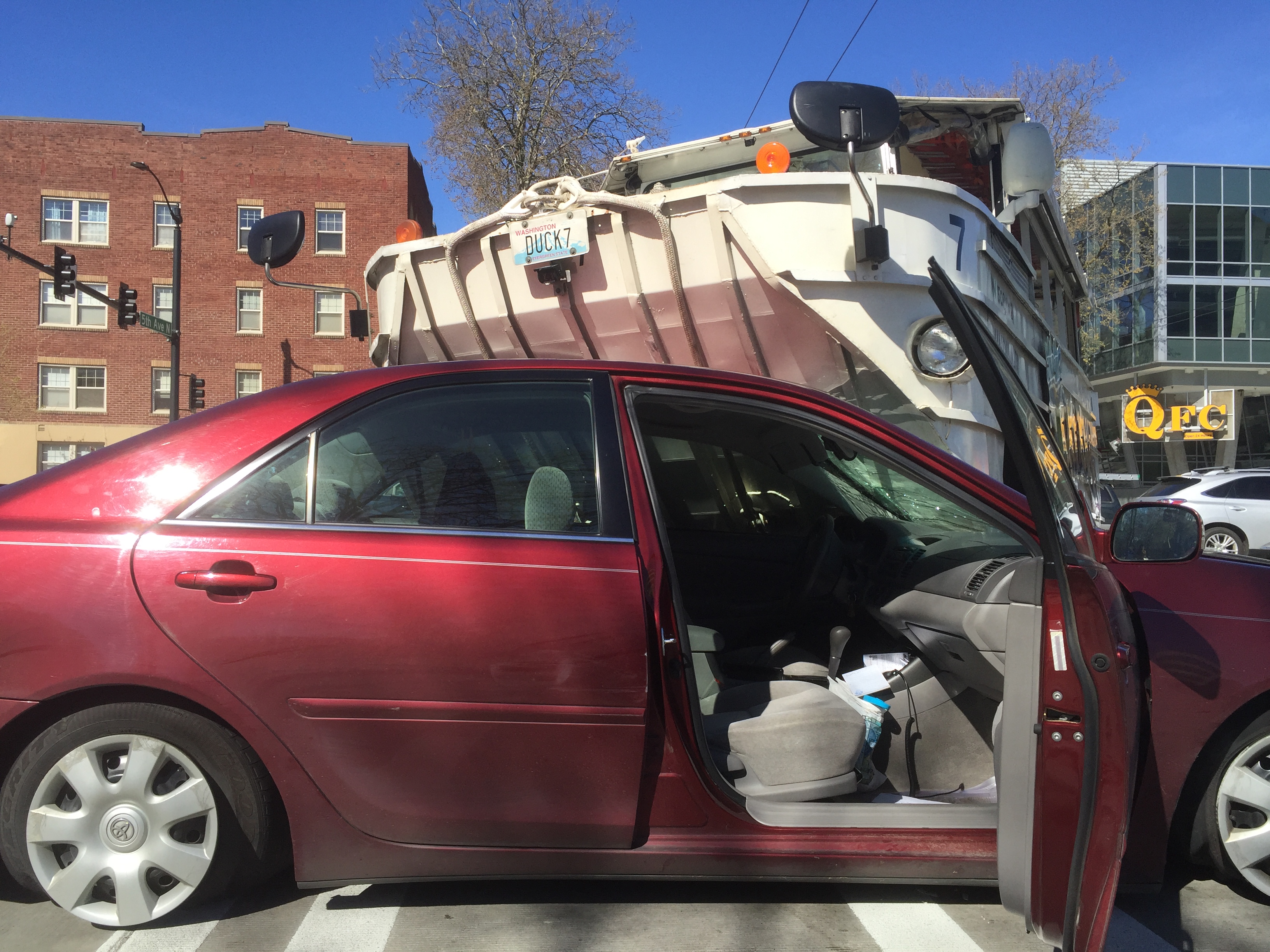 The amphibious tour company known as Ride the Ducks may, yet again, find itself as the focus of controversy. Months after being allowed to operate again after a fatal crash last September, a duck forcefully collided with a red Toyota on Fifth and Mercer. According to witnesses, the vehicle was dragged for several feet by the Duck, whose driver seemed initially unaware that he hit a vehicle.

The Toyota was driven by an elderly man from Sequim, on his way to visit his wife in the hospital. He was alone in the vehicle. Immediately after the collision, he was able to exit the car from the passenger side door on his own – the Duck had impacted the driver side, and was square against its door when it started. Although dazed, he eventually left the scene under his own power. No one aboard the duck was injured. A Ride the Ducks spokesperson has claimed the elderly driver was at fault. 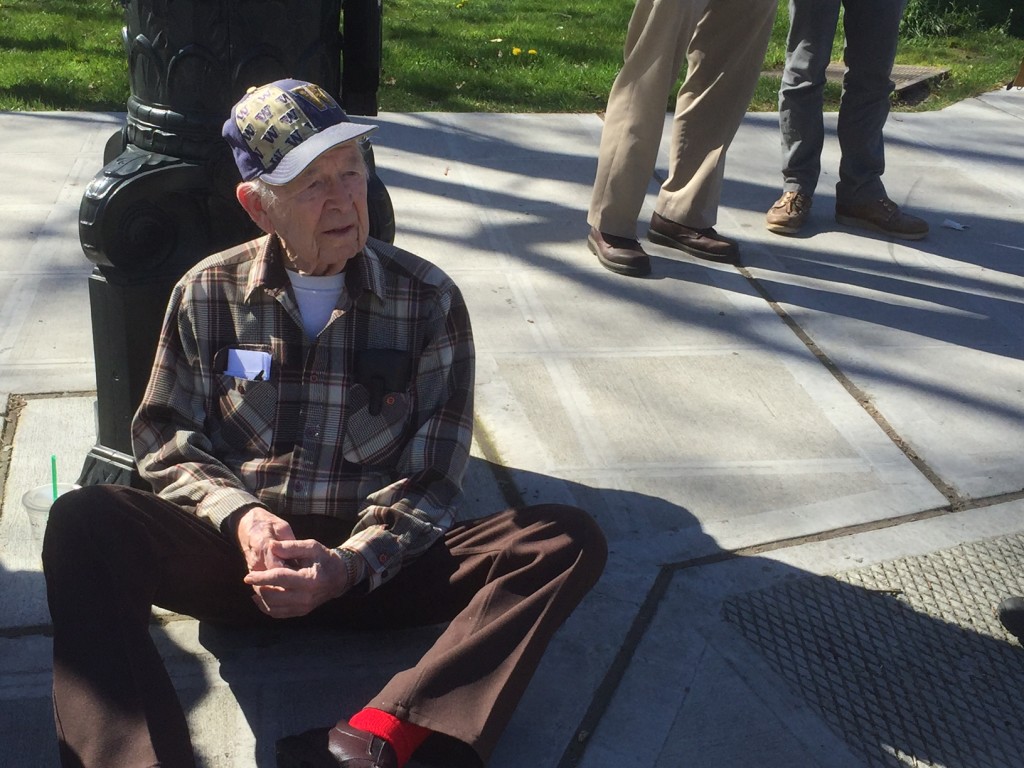 Ride the Ducks has only recently been allowed back on the roads after a September 24 crash that killed 5 North Seattle students riding in a charter bus on Aurora Bridge. The company was required to create a safety plan to address the 442 violations found by the Washington Utilities and Transportation Commission. The company also added a second crew of tour guides so that the drivers can focus on the road, and added cameras to – in theory – give drivers a 360 degree view. 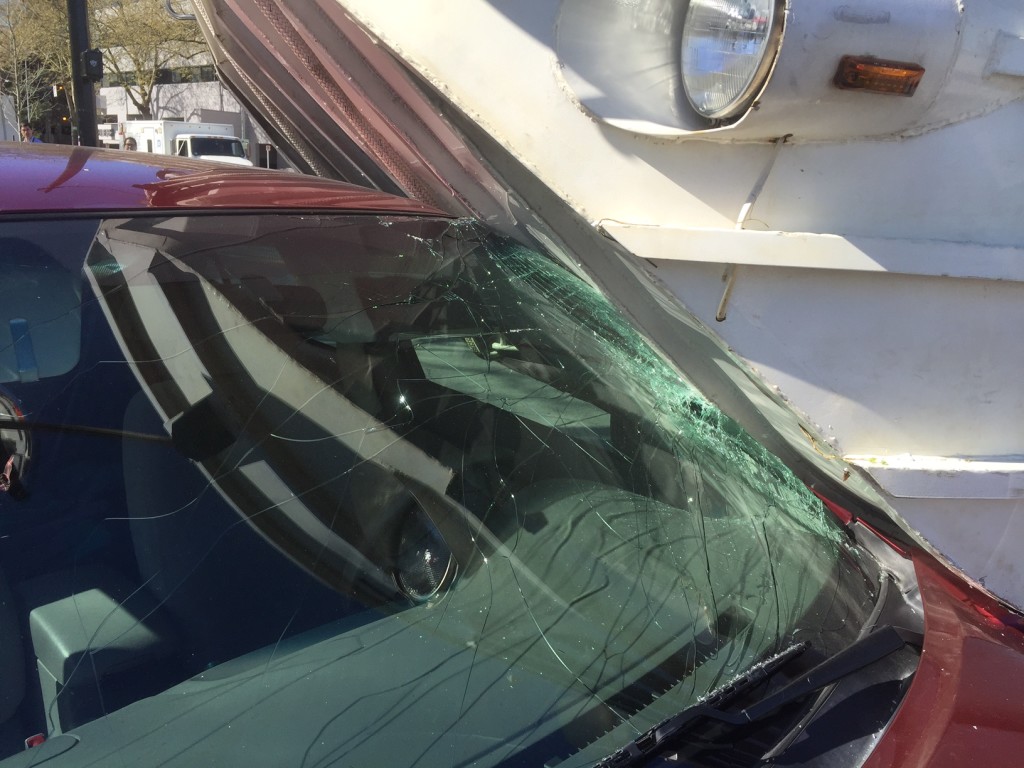 The Fullarton/Goodfriend family – in town from San Francisco on a college visit for their daughter Sadie –saw most of the crash. According to Lisa Goodfriend, mother of Sadie, both the Toyota and the duck were turning left in parallel lanes from the eastern edge of the intersection. She wasn't sure exactly what happened next, but saw the Toyota get pinned on its broadside in front of the Duck and then dragged for a number of feet. The front and back tires on the passenger side of the Toyota were stripped from the wheels.

"We're bike commuters and that scares me, that you can't see that there was a car coming on the outside of you," said Goodfriend. "That seems like a bad situation. So whether the older man crossed out of his lane or whatever, the fact that [the duck driver] couldn't see anything seems bad."

According to a statement from Ride the Duck's spokesperson Annie Alley, the Duck driver was not cited for the crash. "The Duck vehicle was making a left turn from Mercer onto 5th Avenue, with a green arrow and had the right-of-way," said the statement. "Eyewitness accounts indicate the other driver was attempting to make an illegal left turn. All mechanical systems on the Duck operated normally, allowing it to stop quickly and avoid injury."

Seattle Fire and Police crews arrived at the scene about ten minutes after the accident. The scene was mostly cleared within the hour.