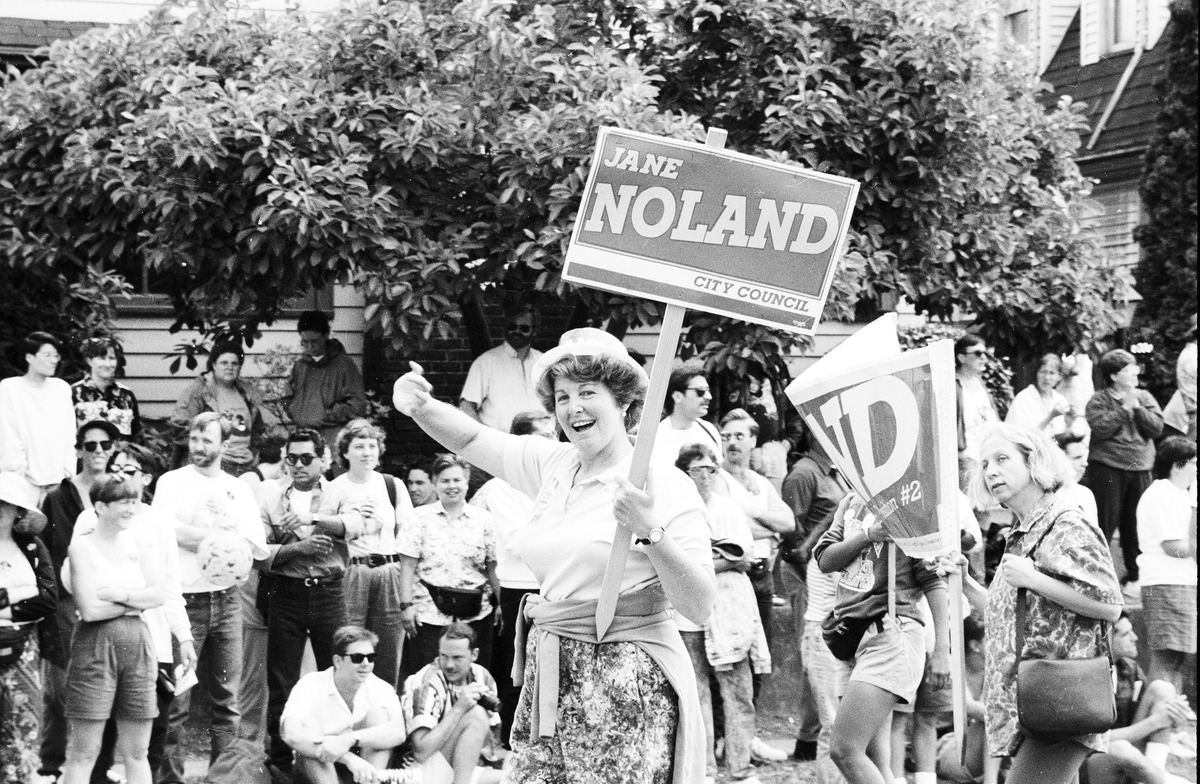 “That was probably the only time I know where the men got together, and after that the council was on its way to changing,” Rice says.

By 1992, the council’s gender balance had flipped. There were six women and three men. In 1994, it was a super majority of seven women to only two men.

Women had taken over the men’s bathroom, literally. Councilmember Tina Podlodowski recalls that her colleague Cheryl Chow led the coup. “The men still used their bathroom, but they would have to knock to see if a woman was in it,” Podlodowski says.

Meanwhile, the real business was getting done across the hall. “If Cheryl wanted to talk to you about something, but didn’t want one of the male councilmembers to hear, she would say, ‘Let’s go to the ladies’ room,’” Podlodowski says, “and she would take you to the actual ladies’ room.”

Today, the ladies have taken over City Hall again. For only the second time in Seattle’s history, we have a female majority on the council, which raises the questions: Did a female majority make a difference in the ’90s? And are there any lessons for what this could mean today?

When women ran the council in the 1990s, Seattle was a rarity in this country. A delegate from one of Seattle’s sister cities, Kobe, Japan, once visited and brought gifts for Seattle’s councilmembers: nine neckties, all nicely wrapped.

“He was mortified, but it’s quite a statement about how unusual that was,” Choe says. “He couldn’t have imagined seven women.”

Jane Noland, who was on the male-majority council from 1986-1991, and then served as part of the female majority from 1992 to 1997, says the gender balance was not inconsequential. “When there was a seven-women majority, issues related to women and children weren’t just issues — they happened,” Noland says. “That was a major difference.”

Some remember them as the “golden years.” The city enacted legislation to help domestic violence victims. Chow and Choe focused on Asian at-risk youth and getting them off the streets by investing in community centers.The Public Safety Committee brought together the Seattle Police Department, Harborview emergency room doctors and educators to fight an epidemic around teen gun violence deaths. There were big wins for the Families and Education Levy which provided support for children and families in and out of school. Seattle became one of the first cities to introduce legislation around LGBT civil rights.

“[Women] look at quality of life issues in a different way, and we always consider women in legislation and men don’t always do that,” Podlodowski says. “We thought about the impact of legislation on a diverse community and I don’t necessarily think that happens in an all-male environment.”

The council wasn’t particularly compassionate toward the homeless, however. They passed a slew of controversial ordinances known as the “Sidran Laws,” which upped public urination to a misdemeanor, banned panhandling and sidewalk sitting and excluded people from parks. It was part of a broader effort to sanitize the city.

(This was during the era of “broken windows” when New York City Mayor Rudolf Giuliani championed cleaning up graffiti and other petty property crimes as a way of addressing a much larger crime epidemic.)

George Howland, news editor at the Stranger at the time, remembers Noland sponsoring the infamous ban on posters on telephone poles. “Her daughter put up a poster for her lost cat, which would have been illegal under legislation,” he says.

The council didn’t just stick with so-called women’s issues, however. Many of the women on the council at the time now point back to the revitalization of downtown as their single greatest accomplishment.

In 1992, the historic Frederick & Nelson department store had closed, followed two years later by its neighbor I. Magnin. National retailers weren’t looking at downtown. They were looking away from it.

“Downtown was deteriorating, and we were concerned about what would happen,” says former councilwoman Sue Donaldson.

In response, the council led the effort to re-open Pine Street to cars. (It had been closed between Fourth and Fifth avenues since 1990, and Nordstrom was going to walk away from a $100 million investment if it wasn’t re-opened.) Their efforts helped to bring more than 1 million square feet of retail space to downtown Seattle between 1996 and 1998. More development ensued, including the building of Benaroya Hall and Key Arena.

“I think downtown was a major victory,” Choe says. “Downtown was dying.”

Just as notable as what the council accomplished was how they went about doing it. This was a group of individuals that liked to have a 9-0 vote on most things. Its nickname was the "consensus council."

“We talked with one another, found out what ideas each had, what they were thinking and what their opinions were,” recalls former councilwoman Jan Drago. “If you’re asking for their vote on legislation, and if they don’t like it, well what ideas do they have to change it? What would it take to get their vote? But that’s one-on-one. It’s called walking the halls.”

This way of doing things was made easier because the old city council chambers (demolished in 2003) had a unique bullpen-like construction, with the offices of councilmember offices centered around a single, long hallway. “If anybody was going to visit a council office, they had to walk past most of the other council offices, so you knew who was on the floor, what was going on and who was having a conversation,” Podlodowski says.

Choe says there was tremendous work being done that the public didn’t see. This was a special council. Members took a meaningful look at which viewpoints were represented by which councilmembers and constituencies. They walked the halls. They attempted to get buy-in.

“There is an art and science of compromise, and I think it takes listening and understanding perspectives and attempting to get support so the end product is stronger,” Choe says.

(Consensus wasn’t the only way they supported eachother, Podlodowski remembers sitting at the Council Dias with fellow councilmembers Charlie Chong and Richard McIver, who had the habit of falling asleep. Back then she says they used bill books with legislation, so she’d constantly be elbowing them or helping to switch pages in their bill books.)

Having Rice at the helm also made a difference. A former councilmember himself, Rice knew how to work with a council, says Michael Brown, who was a legislative aide to Councilmember Richard McIver from 1997 to 2000.

“The council moves in reaction to who is in the mayor’s office, and Norm Rice was a consensus mayor,” says Brown, now Vice President of Community Leadership at the Seattle Foundation. “He wasn’t heavy-handed or ruling with a stick. There was a strong relationship between the council and the mayor.”

Whether the council’s consensus-oriented nature had anything to do with the female majority is the subject of some debate. Former councilwoman Margaret Pageler suggests that the women on the council had less ego invested compared to male counterparts. “Women of my generation were well aware that if you focus on grabbing the credit, you won’t accomplish anything,” she says. “We were motivated to make a difference rather than thinking ahead to the next rung on the ladder.”

Many of the women on the council did have political aspirations, however. Chow and Noland went on to run for Mayor. Podlodowski is now running for Secretary of State.

“It’s not that there wasn’t competition, it’s not there wasn’t vying for this or that — we had our good days and our not good days,” Choe says, adding that a female majority “is certainly not a panacea… I think we had a lot of work to do and tended to focus on the work.”

And not everyone looked upon the council’s efforts with admiration. James Bush, who covered City Hall for Seattle Weekly in 1996, says the 9-0 votes ended up working against the council. “People saw it as an establishment, and it made them more likely to vote against them,” Bush says.

In December of 1997, the Seattle Times reported that the city overpaid Pine Street Development by $23 million to build a parking garage under Pacific Place. The city was accused of cutting the deal in order to guarantee that Nordstrom would move into the old F&N building.

After an investigation by the State Auditor and the Seattle Ethics and Elections Commission, the city was cleared of any wrongdoing. But public perception seemed to persist that the council was too cozy with developers.

By 1999, the council was again dominated by men — some of whom brought more transparency in government. “That (female-majority) council had very little open debate and it seemed like that was a political choice they made,” says Howland. “New politicians like Nick Licata and Peter Steinbrueck opened up the council for more dissent and dialogue. They improved the discourse that was happening at City Hall.”

The days of men making decisions in the City Hall restrooms are a thing of the past, first, because there is a female majority back on the council, and second, because of the way the new City Hall was built in 2003. There are more bathrooms, offices aren’t as close together, and councilmembers are less likely to run into their colleagues.

“At the end of our first week, Debora Juarez was feeling blue and I asked what was up,” Councilmember Sally Bagshaw says today. “She said, ‘I’m just so surprised at how little we see one another.’”

Not only does the new space play a role, but Bagshaw says they are working longer hours. The new district system could also keep councilmembers more focused on their neighborhood constituents, leaving them even less time to work with one another.

While it’s too early to really tell whether this council will be inclined toward consensus, a look at the individual members doesn’t suggest there will be much Kumbaya. Still, Bagshaw says there is already more conversation around paid family leave for Seattle workers, partly because many of the women on the council have juggled a career while raising a family.

“As women, we have different experiences and that will make a difference,” Bagshaw says. “We all worked through high school, college — law school for some of us — and I’m sure [Councilmember Bruce Harrell] did that too. I don’t want to say life was harder, it was just different. I wasn’t a football star.”