War games coming to a park near you 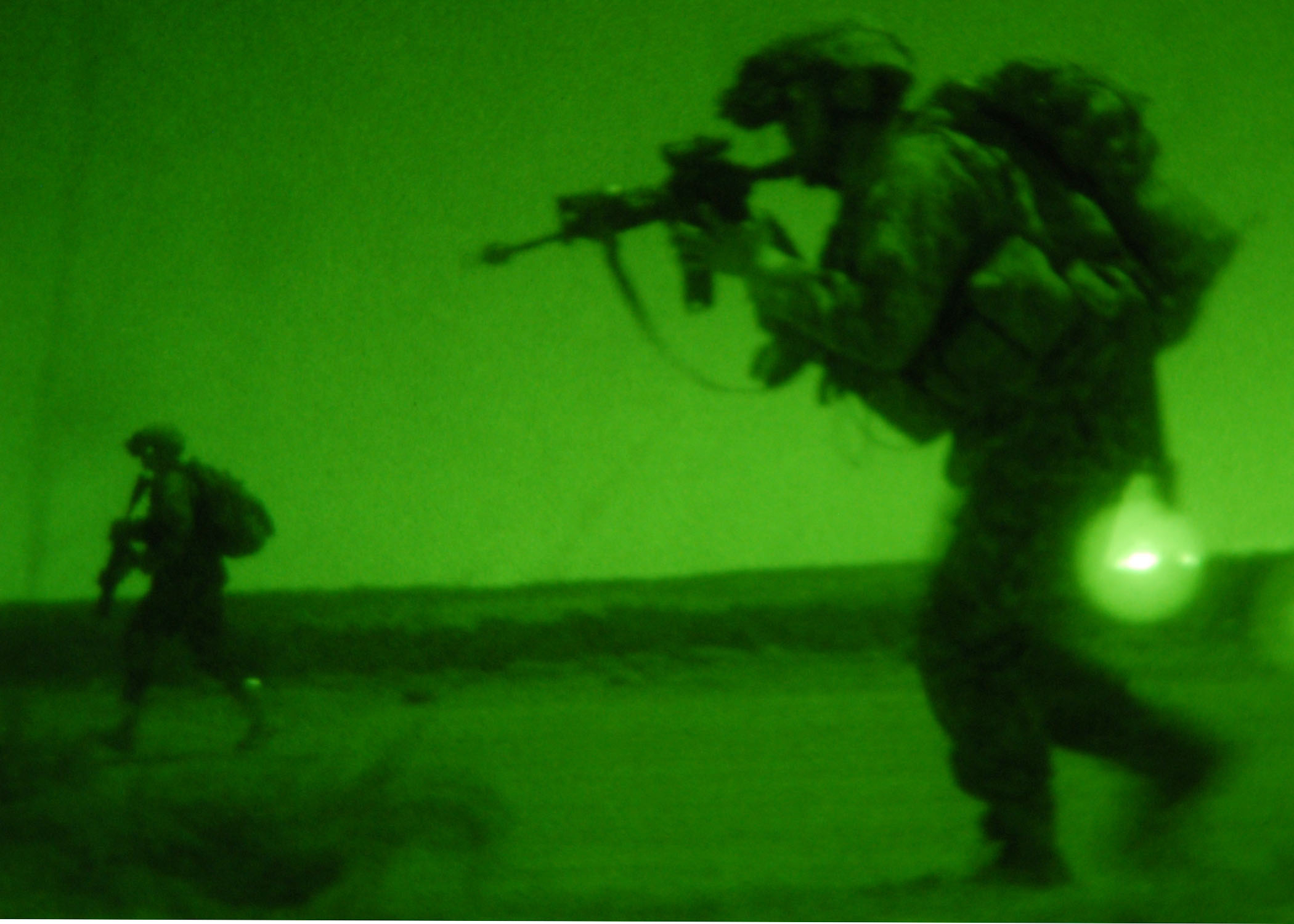 Imagine one of Washington state’s public parks at night. It could be a remote place or the Olympic Peninsula, or Discovery Park, Seattle’s wildest place. Unless there happens to be a park official or after-hours visitor, there may be no human presence. The only sounds are crashing waves, the wind, rustling from predators in the inland forest. But there’s something in the water. A sleek boat is gliding silently to shore.

Three black-clad figures jump off the boat and hurry up the beach into the trees, where nothing but the crunching of twigs betrays their presence — and even this they take pains to silence. The figures search for a dense thicket or bush, and shelter themselves inside, still and silent. Hours may pass, perhaps long enough for the park to reopen. Still, anyone passing by could be fooled that the park was as empty of human presence as before. Or maybe shocked by stumbling into the middle of a group of menacing-looking individuals.

The figures in this scenario might be Navy SEALS practicing. Indeed, these scenarios already occur in several parks and public lands across Washington’s coast. And the military training exercises will continue and potentially expand, almost all of it without the public’s knowledge.

The Navy has pinpointed 68 locations in Washington to use for combat training exercises that began in mid-January, the non-profit news organization Truthout reported early this year. Truthout obtained a leaked Navy slideshow showing the scope of the Navy’s interest in Washington lands as training grounds.

According to the documents Truthout received, some of these sites will be used for an average of two to eight times per year, and trainings will last from two to 72 hours. Locations stretch around Puget Sound, the San Juan Islands, the Olympic Peninsula and the Pacific Coast, and they include many locations within the vicinity of cities, including Gig Harbor and Port Townsend, where both Fort Worden State Park and the Port Townsend Marina are listed.

In Seattle, Discovery Park is on the wish list as a possible location. The Truthout report suggests that the use of parks in Seattle and other populated areas likely relates to the growing probability of U.S. military forces being called upon to operate in urban areas around the world.

The leaked documents describe a variety of Navy exercises. They may range from beach landings for practicing infiltration and reconnaissance, to simulated battle with an enemy using paint ball bullets, to arriving on shore and sneaking inland to practice hiding.

As for how many of these sites are actually going to be used and how often, it’s hard to know. And forget about getting any sort of fixed schedule.

Sheila Murray, Navy Region Northwest spokeswoman, told the Kitsap Sun that the documents uncovered by Truthout are only for preliminary planning. The Navy would ultimately use only a handful of the 68 sites listed, according to the Sun.

In an email responding to Crosscut questions, Murray said, “Naval Special Warfare has conducted training in the Pacific Northwest for many years. We have a longstanding relationship with local officials and coordinate routinely with military and civilian authorities to gain approval.”

Although Navy training is nothing new in Washington, there have been significant concerns about jet noise and the impact on wildlife, including the effect of sonar exercises on marine mammals.

The extent of the training on parks, recreational and other public lands has drawn opposition from the West Coast Action Alliance. Karen Sullivan, a co-founder of the group and a retired biologist for the U.S. Fish and Wildlife Service, particularly criticizes the Navy’s lack of public disclosure over where and when training takes place. Sullivan says she is not against Navy trainings or even secrecy when it’s necessary, but there should be a process of public disclosure that the Navy is training on public lands.

The Navy, Sullivan said, uses various tactics to shield its plans. For example, the National Environmental Policy Act (NEPA) specifies that government agencies do not need to go through the process of environmental review for regular activities that are low-impact. This is called categorical exclusion, and isn’t normally granted for military training. The Navy’s approach has been to grant each small piece of training categorical exclusion, finding that each is low-impact.

Last month, U.S. Rep. Derek Kilmer, who represents the Olympic and Kitsap peninsulas in Washington’s 6th Congressional District, wrote a letter calling on the Defense Department to implement longer public comment periods when it comes to military activities there. This was in response to concerns last year from Olympic Peninsula residents about proposed Navy radar training exercises.

Kilmer, a Democrat from Gig Harbor, points out that NEPA requires that federal agencies inform the public about actions they take that might have environmental impacts.

The Navy’s Murray said Monday, “The Navy is in the beginning stages of a NEPA environmental planning process for an Environmental Assessment. The NEPA process includes public participation at the appropriate time.”

Sullivan thinks people should also be concerned about the Navy’s plans for training exercises on beaches.

“It’s very psychologically intrusive to think that these guys are in some cases hiding, they have to stay hidden, for 72 hours. So you’re at a state park with your family and your dog runs into a bush, or your kid does — are you comfortable with that?” she said.

Virginia Painter, communications director for Washington State Parks, said the public doesn’t need to be told about Navy training in state parks, which she told the Sun have been going on for at least the past eight years. “Notifying the public isn’t part of our permitting process,” she told Crosscut. While permits to the Navy have allowed combat training in five state parks, Painter thinks this isn’t necessarily a cause for concern. “Combat conjures up an image of something that isn’t anything like what’s really happening,” she said. “It’s not a new thing — it really hasn’t changed in scope; it’s been very minor.”

Painter said the Navy trainings typically call for a beach landing from a small boat, involving three people. The exercises occur in the middle of the night, long after the parks have closed. Under the permits, they must notify the park three days in advance of the training. However, said Painter, there’s no process by which this information would be relayed to her or anyone higher up in the Washington Parks system.

David Takami, communications manager for Seattle Parks and Recreation, only learned that Discovery Park was being considered as a training location after he read the story from Truthout. “We were surprised,” he said. When Seattle officials contacted the Navy, according to Takami, they were told that Discovery Park was simply on a list of sites for consideration, and no decisions had been made about whether or not any training would take place there — or when. As with state parks, the Navy would normally need a use permit, depending on the type of activity planned and its impact on the park and the public, Takami said. But Seattle Parks and Recreation hasn’t received any kind of direct request from the Navy.

Michelle Kinnucan, a military veteran and peace activist who lives within walking distance of Discovery Park, points out that, according to the city website, such parks are meant to be places of leisure, solitude and tranquility.

She trusts that the trainings would be conducted safely — but for her, this isn’t the main issue. She worries these training exercises represent an encroachment of the military into society.

Sullivan agrees. “People in city parks and state parks, they’re going to see military activity where it has never been before becoming normal. And that’s a very alarming trend.”

For the Navy, though, training in the Northwest is an opportunity.  “Puget Sound,” says Murray, “offers a challenging and varied aquatic-coastal environment for Special Operators to safely stage and conduct high-current, cold-water training unique to the area while meeting security and force protection requirements. Any proposed training will be fully analyzed, coordinated with military and civil authorities and conducted in compliance with the law.”